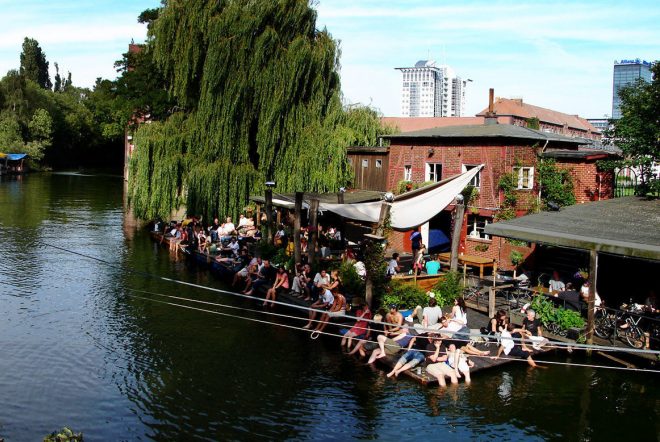 This morning, the Berlin fire department was called in to deal with a fire which had hit Berlin institution Club der Visionaere.

This is so sad. Club der Visionaere in Berlin has burned down. One of the most legendary venues of dance music, a true underground place where some of the best DJs in the world played not for the money but because it was just a cool place to play. I was there 3 weeks ago 🙁💔 pic.twitter.com/8nuiiNh8J4

The news was broken by the city's fire department, who revealed (in German) that "the club burned down almost completely" but that "the spread of fire to the neighboring gas station has been prevented."

They also reported three injuries but thankfully no deaths.

However, BBC World Service journalist Faranak Amidi tweeted a message from Club der Visionaere, which reads, "Not burned down. Fires have been extinguished. Police set up a perimeter so you can't get very close but it looks like the main area of the club is still intact. From across the canal, it appears that the kitchen/bathroom area is the only damage."

"Sadly, today at 8 AM an unfortunate fire broke out at Club der Visionaere. Before providing more details, we would like to express our extreme gratitude and relief that no one was injured in the incident, including guests or staff.

We are happy to say that, contrary to earlier news reports, the entire club was not affected, only a section of the upper-level seating area located under the weeping willow tree, which was closed at the time of the fire. Once again, the club area itself was not affected.

First measures were taken by staff, who were trained and certified as fire-protection first-responders. They ensured guests were evacuated in a calm and controlled manner without injury. The fire department then extinguished the fire shortly after their arrival to the scene.

The cause of the incident is still unknown. Investigations are ongoing. We would like to thank the Berlin police and fire department for their effective response and continued commitment.

We are now assessing the extent of the damage and hope to reopen soon after consultation with authorities. Until then, we will keep on keeping on by continuing the Club der Visionaere program at Hoppetosse as of tomorrow (Sunday).

We would also like to express our extreme gratitude to the tremendous support in way of messages, posts and offers of help from our local and international Club der Visionaere family. Your presence really does bring a much-appreciated light to this otherwise darker moment. As well, your expressed compassion reminds us of and highlights the many warm relationships that have developed over the years. Thank you so very much for your sincerely felt words and energy."


The dance music community has poured in with support for the club.

Club Der Visionaire I’m so sorry. Some very special things have happened at this venue.

It seems club de visionarie in Berlin was in flames this morning. I sincerely hope everyone’s okay 😟

The cause of the fire is currently unknown.

The spot has carved out a name for itself as a critical hub of minimal music and a home for DJs with deep and varied record bags - its (often weekend-long) sessions have hosted everyone from Ricardo Villalobos and Zip to Nicolas Lutz and Binh.

[Via: Der Tagesspiegel and Resident Advisor]