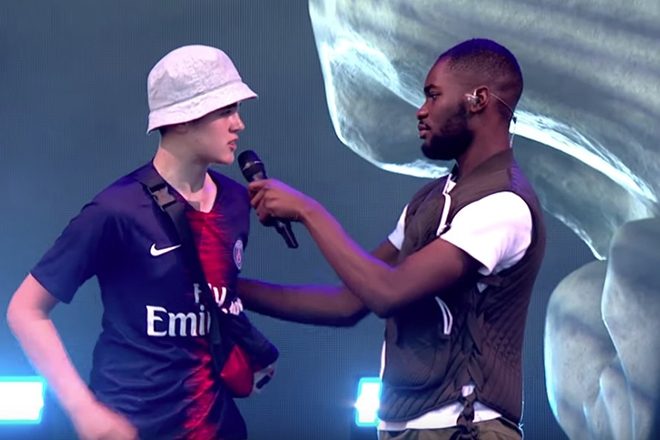 'Alex from Glasto', the British teenager famed for rapping 'Thiago Silva' on stage with Dave during Glastonbury 2019, helped launch the notorious Politics For All Twitter account, a VICE report has revealed.

After Alex's on stage rapping was broadcast on the BBC and shared widely on social media, he was awarded brand deals, recording contracts and made daytime television appearances, joining the line of viral pop culture stars who shine brightly for their 15 minutes then fade into obscurity.

But a new report has indicated Alex's impact on wider culture and society has been more pronounced than first realised, revealing that contacts he made from his viral fame helped launch the controversial news aggregating Twitter account Politics For All, which was permanently banned from the platform last week for "violating rules on platform manipulation and spam", according to a Twitter spokesperson.

Read this next: High levels of MDMA and cocaine in Glastonbury's water is impacting rare eels

It was founded by then-17-year-old student Nick Moar, who has been Head of Social at The Spectator since March 2021, and gradually built a huge following, amassing nearly half a million followers at the time of its suspension.

The format of the account was to relentlessly tweet a combination of breaking news, TV interview and newspaper article quotations, opinion surveys, and comments from House of Commons discussions.

It was known for its use of siren emojis and short snappy tweets to convey breaking news.

Politics For All faced criticism and accusations of claiming neutrality while being skewed to the right politically in its coverage, as well as pursuing clickbait headlines. Moar was revealed to be a Conservative Party supporter and Brexit advocate by the Byline Times last May.

So where does Alex From Glasto, real name Alex Mann, come into the picture?

It was revealed yesterday by VICE that one of the fans Alex gained from his viral appearance at Glastonbury was Mail on Sunday political journalist Dan Hodges, who followed Alex on Twitter in 2019.

Soon after, Alex contacted Hodges through Twitter DMs, informing Hodges that his friend (Nick Moar) was thinking of starting an internet site for speedy, unbiased political news, and asking if Hodges could provide any help. Hodges agreed, and spoke with Moar about setting up the account, which launched that month.

Its following started to take off, helped by these high profile political tweeter endorsements.

Read this next: The wonderfully weird shit you need to do at Glastonbury

Moar also started running the News For All and Football For All Twitter accounts for non-political news and football news aggregation.

Throughout the latter half of 2021, Politics For All was criticised for some questionable activity on social media, such as posting hateful comments in all caps after being denied access to a karaoke event hosted by iNHouse Communications; and for retweeting gambling content.

Nick Moar's personal account and all of the 'For All' aggregators he helmed have now been banned from the social media platform, marking a sharp rise and fall story similar to that of many viral stars. Which is fitting, since the 'For All' accounts may not have existed or taken off in the way they did if Moar could not get a hold of Dan Hodges through his friend Alex Mann.

In 2019, Mixmag's Digital Editor Patrick Hinton wrote about the tedium of contemporary viral celebrity and popular culture in Mixmag's newsletter, upon Alex from Glasto being greeted with brand sponsorships, record deals and more when he left the Somerset festival.

Read his comments below.

Dante’s nine circles of hell have nothing on the soul-sapping pit that is the Monday morning queue to get out of Glastonbury. Still, I did manage to crack a smile on the trudge out of Worthy Farm this year after loading up my phone and seeing footage of Dave bringing an eager young fan called Alex up to the Other stage to rap AJ Tracey’s verse on their hit ‘Thiago Silva’. A bucket hatted teen bodying his opportunity to become a legend among friends for life, what’s not to love? I sent it to a few groups chats, collected replies of “jokes” from friends, and kept trudging. Good, wholesome content.

But no. In the age of hyper-capitalism, viral content is no longer allowed to just be fun. Now it must be profitable. Within hours of young Alex leaving the site, money men were sliding into his DMs and offering Boohoo sponsorships and record deals, resulting in the single ‘What Ya Kno Bout That Bro?’, released via Universal with a video premiered on GRM Daily on Wednesday.

All power to Alex for securing the bag so successfully - I’m happy for him. But some of the fuss surrounding the viral teen leaves a sour taste. When AJ Tracey, the Black artist who wrote the bars Alex rapped, was interviewed on the BBC he faced racist and accusatory questioning about his lyrics. When fresh-faced white teen Alex went on Good Morning Britain and weakly recited AJ’s lyrics in one of the most awkward TV appearances in recent memory, he received applause from a panel of hosts including famously belligerent Piers Morgan, who proclaimed: “nailed it!”. If the mainstream media want to start using rap’s spin-off stars for boosting viewing figures, they should start respecting the whole scene.

And then there’s Alex’s single. It’s not very good. Alex fatigue is setting in, and that original, brilliant Glastonbury moment feels shrug-worthy. At the risk of sounding like a millenial OAP - can’t viral content just be fun again? If “Charlie bit my finger” happened in 2019, that baby would be signing a six-episode sitcom deal with Channel 4.

Nick Moar did not want to speak to VICE when asked about his involvement in the account.