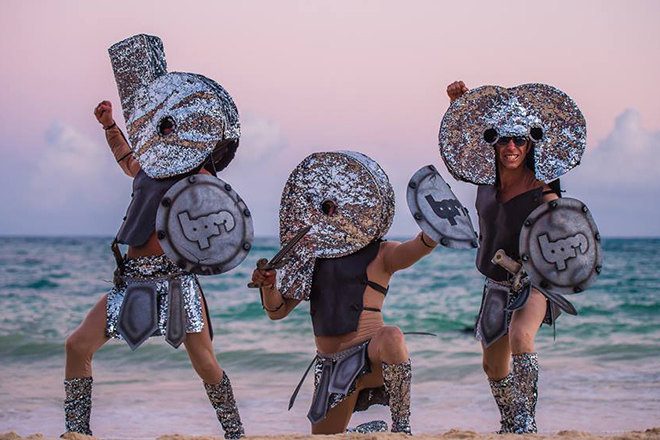 The BPM Festival is going strong 'til January 17, but already, exciting things are happening in Playa Del Carmen. Here are the highlights of the week so far and have no fear: the parties are far from over.

Blue Parrot was home to some of BPM's most anticipated parties of the week. Starting off on Friday with an Ants showcase led by Sasha, UNER, Gorgon City and Andrea Olivia, Blue Parrot saw massive crowds file in throughout the weekend. There was no exception for Richie Hawtin's ENTER. with Matador, Hito and Lee K and the following day's Music On party with Marco Carola, Paco Osuna and LEON. Blue Parrot became so packed that those unable to get in settled with partying on the other side of the fence.

2 All Day I Dream conquered a new beachside venue

On Saturday, Lee Burridge's dreamy event returned to Playa Del Carmen and this year it was hosted at a delightful new beachside venue called Martina Beach Club. As the crowd neared capacity, Burridge let atmospheric sounds drift across the party with help from newcomers Oona Dahl, Gorje Hewek & Izhevski and Seth Schwarz & Be Svendsen providing support for the otherworldly All Day I Dream brand.

Only announced on the day of the party, Richie Hawtin and Dubfire hosted the second "Techno Tacos", an event that is arguably the perfect embodiment of all things BPM. As the name suggests, the pop-up show took place at a taco stand and drew over 2,500 people to dance the night away at the nondescript location.

4 Andhim and Superfriends delivered in Playa

Andhim brought their Superfriends party to Playa Del Carmen in a one-off match against Brazilian heavyweight Warung. The super duo took their crowd through the night with a night of mixed favorites ranging from hands-up-in-the-air tracks to deeper, grooving house tunes they've become well-known for. Some impeccable selections came from Butch and Conti & Leo, but the most impressive set came from Brazilian duo Dashdot.

New York's Crew Love delivered a gorgeous mixture of sunshine sounds and pure house to the shore of Canibal Royale with an outstanding run of music from start to finish. Though the tragic news of David Bowie's passing left many in the music industry with a somber feeling, the Crew Love party took a moment to play 'Under Pressure' as the crowd sat, quieting the chaos of BPM for just a moment for a touching tribute to the late star.

6 King Solomun took over with the Diynamic Showcase

From 5pm through 6am, Solomun brought his beloved Diynamic showcase to The Jungle at BPM. Supported by H.O.S.H., Kollektiv Turmstrasse and Thyladomid, the all-nighter was a global gathering of appreciation thanks to a live stream. There was no shortage of BPM attendees flowing into the event, but still, the show welcomed an even wider global audience through a broadcast that captured the entire show from beginning 'til end.

The Thompson Hotel Rooftop played host to an exclusive party for members of the industry on Tuesday evening in Playa Del Carmen. Cassy and Apollonia provided a proper soundtrack to usher in the evening as attendees appreciated the gorgeous, panoramic views of the city below, providing an oasis of relaxation amongst the chaos of BPM.