There’s something sacred about the feeling of walking into a festival. Night-time rumbles of bad chanting, a distant bass thudding through your chest, drunken bodies pouring into the entrance in a warm hazy blur, and a raucous, heart-pounding feeling of anticipation. But there’s something about the energy of thousands walking into their first festival in over 15 months which is absolutely transcendent. “Three hours ago I was social distancing at Greggs,” says one Brit who basked in his first moments entering the Albanian festival, UNUM, now revelling in the close proximity of hundreds of people.

UNUM Festival might end up a tale to tell the grandkids. Last weekend, the 24-hour, five-day event took the title of the first festival in Europe since the pandemic began which ran without any restrictions; no social distancing, no masks. Still taking baby steps in its second-ever year, the festival never once felt like a fledgling event. With a silky wristband slipped on and an usher in from the one burly Balkan man guarding the entrance, UNUM Festival and its outlandish production quickly became a reality. 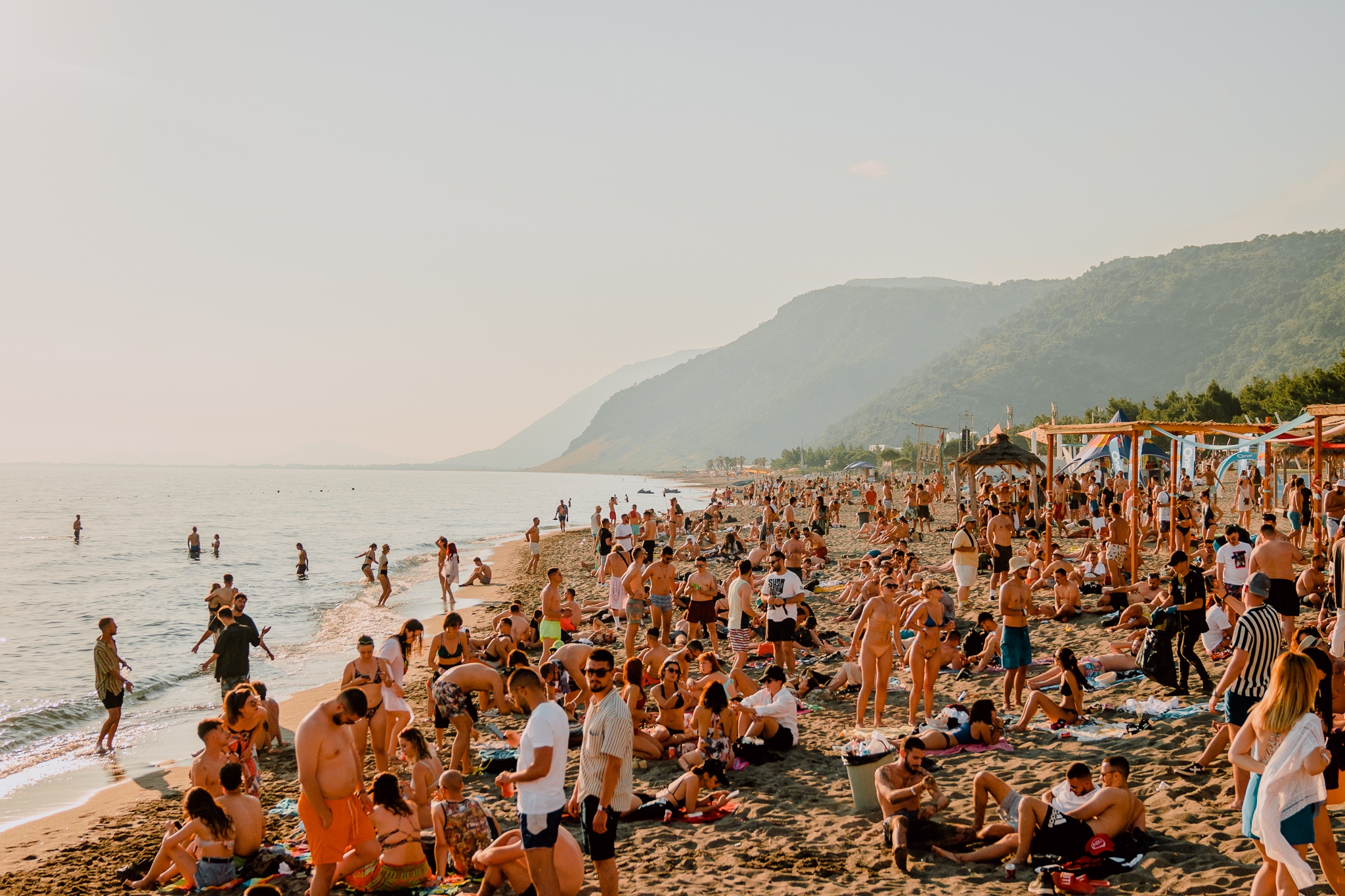 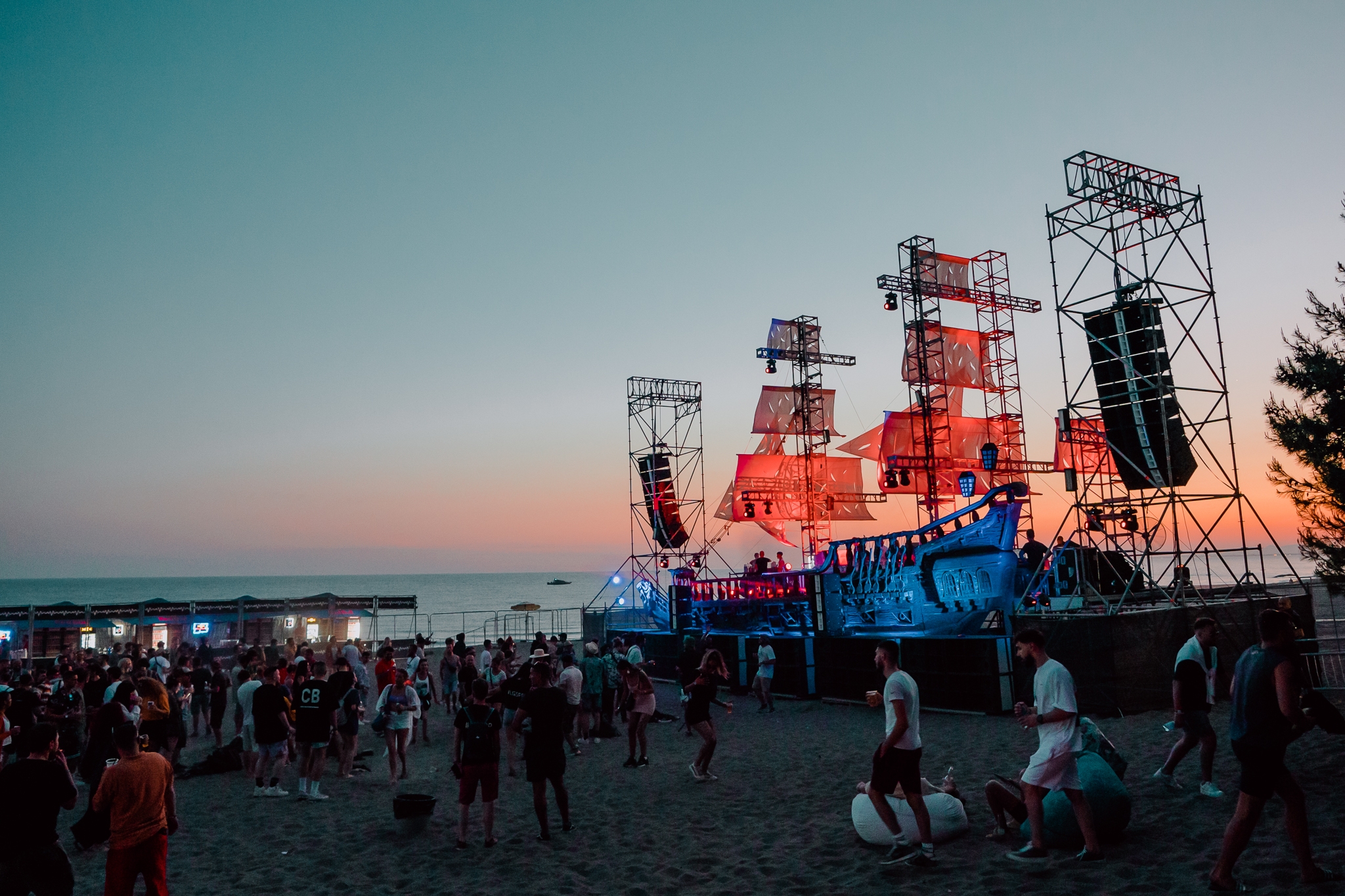 The debauchery could be seen from a mile away; bodies all over the beach which doubles as the landing spot for new arrivals, the roaring collective of voices screaming, cheering, nattering. Stars peeking over the mountain tops, the thud of a real soundsystem, coloured lights lining the trees that creep into the woodland area. It’s a scene unlike any other in recent memory, but not a scene that takes too long to get back into the swing of, even after all these months. As we walk through for the first time, our footsteps soundtracked by Greek producer Manolaco’s deep house set, people smile from ear-to-ear as if they were children having their school photo taken. It’s not like anyone has forgotten how to party; we’ve just forgotten how good it feels to be back against the chest-hitting beats, dancing arm-in-arm alongside 8000 people.

Albania currently has a strong handle on the pandemic: COVID cases have been on a steep decline since hitting 1,000+ daily cases in late February, with just nine new cases recorded in the country on June 3, the opening day of UNUM. The festival has been confident in going ahead all year, announcing back in January that it would “100% happen” due to working with the Albanian government to become the first festival to employ rapid testing. The organisers talked up the rapid testing plans pre-event, which had been a reassuring aspect of the festival’s commitment to safety. As it turned out, no testing took place on site.

Kushtrim Sahiti, director of UNUM, explains that this was due to a decision by the Albanian government, who eased a number of lockdown measures, including all restrictions on foreign tourists entering the country, on June 1. “The turnaround from the initial protocol regarding testing was a result of a last-minute decision from the Albanian Governor,” says Sahiti. Whether that proves a wise decision will bear out in the aftermath of the festival - yesterday, June 10, daily infections remained low with 11 new cases recorded across the country. Sahiti informs us that all staff had been vaccinated, and all portaloos generously cleaned (as you might expect from a five-day festival). The majority of attendees came from the surrounding areas of Albania and Kosovo, with around 2,000 from further afield, and a line-up featuring a good handful of local DJ names. Anecdotally, many of the foreign travellers we spoke to at the festival had produced negative PCR tests before attending.

The result of that decision was, revellers attending the festival weren’t greeted with a 20cm swab up the nostril like they might have expected, just the usual pat-down from security and then they were free to roam the site. “The energy felt at the festival compares to nothing this generation has come face-to-face with after a year-long battle with this horrible disease. With almost a million vaccinated in Albania, we feel confident that all our guests will come out unscathed,” says Sahiti. 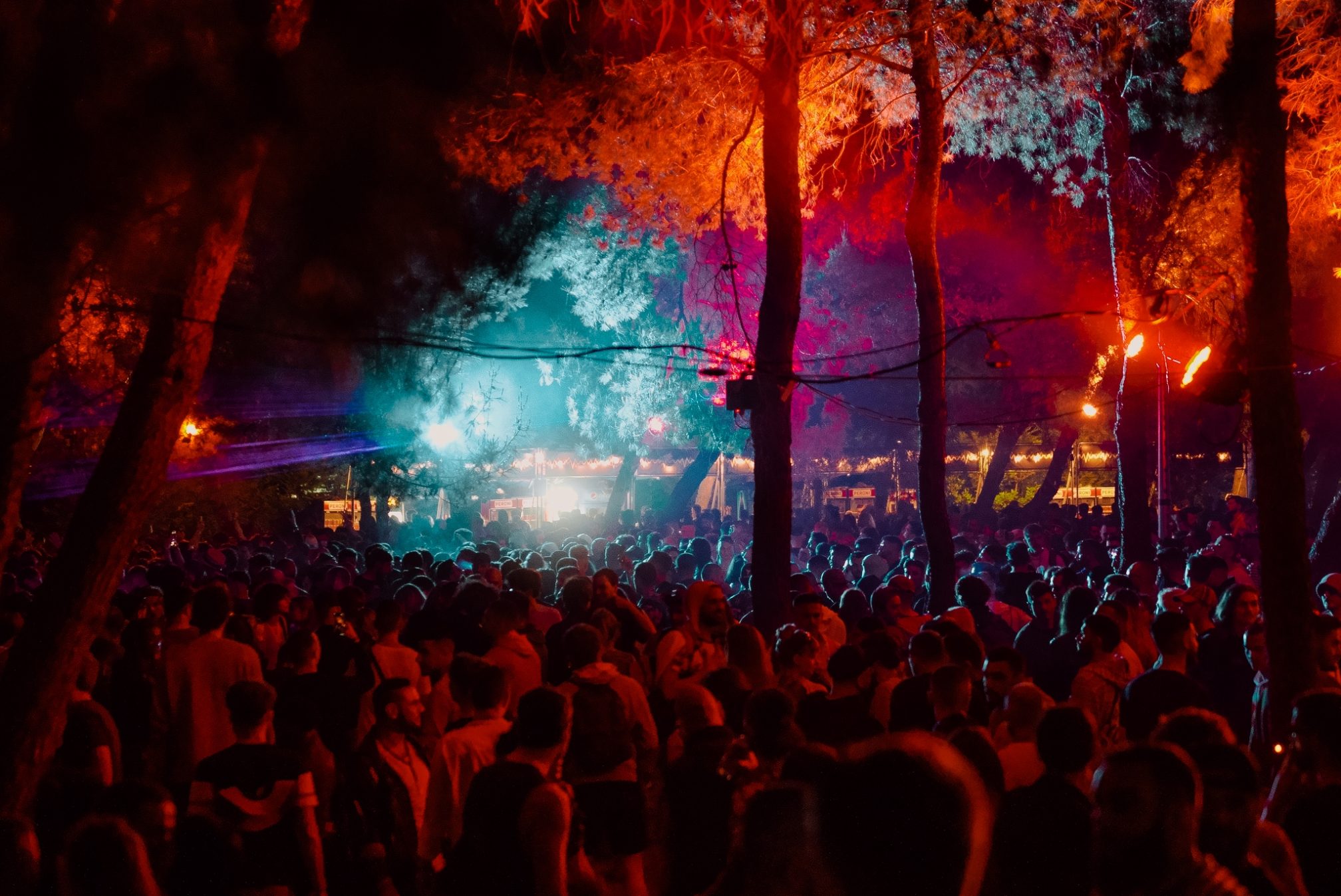 UNUM’s three stages aren’t all too far apart from one another, but what’s surprising is how little sound interference each stage has considering the enormous soundsystem walling each setup. The beach stage is a daytime hotspot for the well-rested, offering more of a shoes-off boogie atmosphere that the other two stages can’t quite pull off so well. Further down the beach, a shipwreck-themed main stage plays host to the harder stuff. Techno and bass-heavy artists fill the bill for the majority of the theatrical 20ft stage’s line-up, accompanied by a sandy dancefloor that saw thousands each night. Stepping away from main stage four-to-the-floor, just a hop skip and a drunken jump over the bank sits the festival’s cherished pine stage. Here, you could find a naughty selection of tech-house DJs and its sister subgenres right through the night and into the early hours.

As day two arrived, Hiroko Yamamura - disappointingly one of very few female artists to play across the long weekender - glowed after her set on the shipwrecked main stage. “It was crazy,” she said post-show where we caught the DJ warming the decks up with some industrial beats before Ben Klock stepped in for a three-hour slot. Thousands flocked to the main stage to see the master at work on Friday night, or morning as it were, where the rave compass pointed straight toward a frivolous set of high-energy tracks.

Read this next: Listen to Yousef's life-affirming mix from The First Dance

Cue the wavy outfits on day three, one for revellers to join the party fresh-faced with a day ticket and enjoy the larger names dotting the line-up. For those returning from the previous days, or even those who hadn’t left for three while intermittently kipping on a dusty beanbag, newcomers felt like a welcomed source of fresh energy. Saturday’s line-up boasted some more big names from Detroit’s Shaun Reeves who enthuses “this is one of the best weekends of my life”, when we catch him backstage, to Zurich’s Alci. But it was Raresh and Praslea’s back-to-back set that took the cake. Raresh, who cut his teeth on the noughties Romanian house scene, set the benchmark for the rest of the night alongside Praslea, as they delivered foot-stomping beats to a 5:AM crowd. 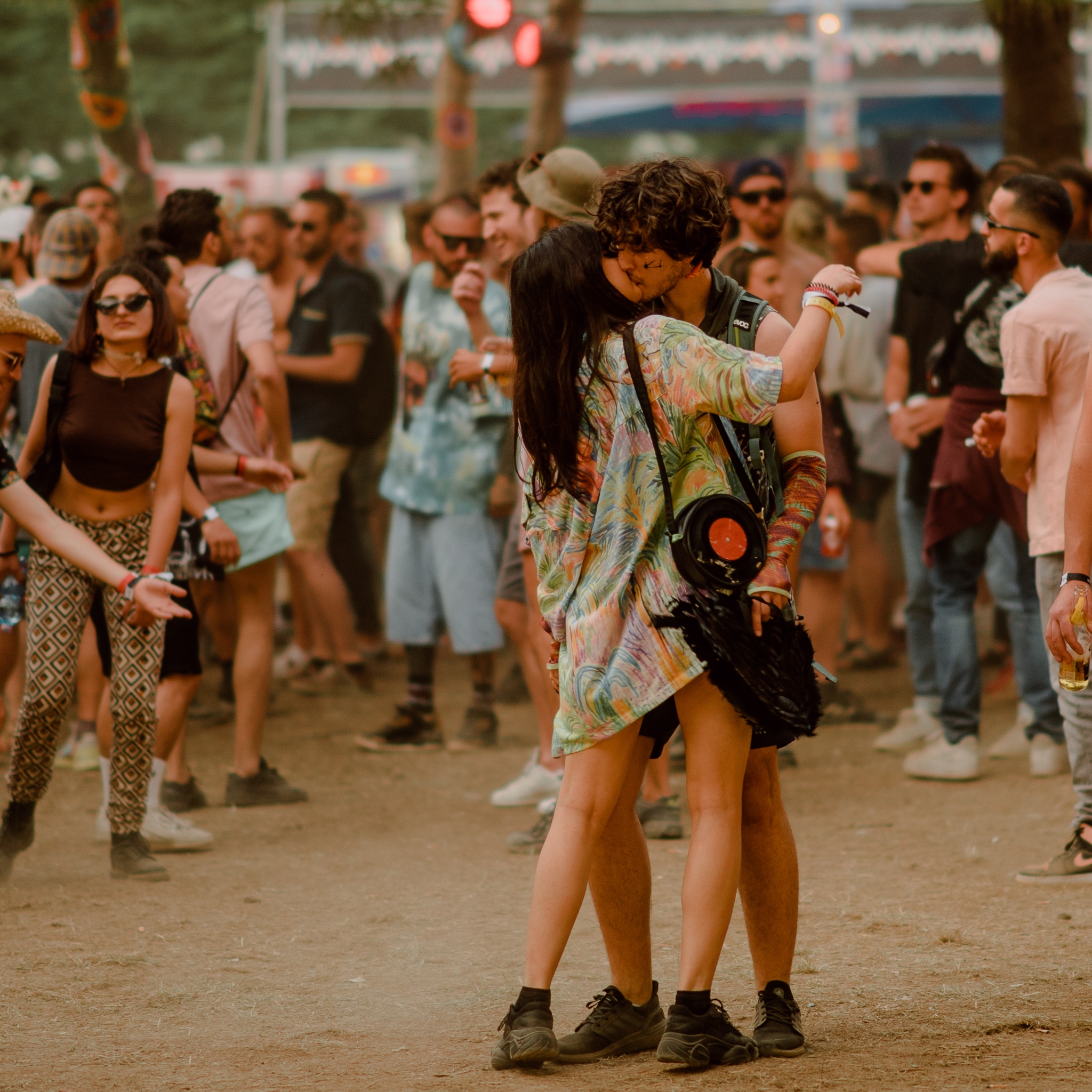 You’d be hard pressed to bump into a fellow Brit at UNUM given the strict restrictions heading back home from the amber list country, but once in a few bar trips, the friendly tone of a drunken Northerner came from someplace nearby. Albeit, spotting an Iceland supermarket t-shirt amongst the well-stepped treads of the pine stage was a far cry from what we had expected, when confronted about his dubious fashion choice, the partygoer retorted: “This is my old work uniform, I just thought it would be funny. No one knows what this is in Albania!”

As the end of the festival loomed on Sunday, energy levels fluctuated with an intense realisation that it would all soon be over. It was the first festival in what felt like a lifetime, after all, and now would be a better time than any to get the party going again. The heavens opened during the evening meaning that the dust settled - quite literally - seeing off the potential for more black-snot-noses that everyone had encountered in the days before. Sonja Moonear helmed a rainy set, but the crowd went nowhere. 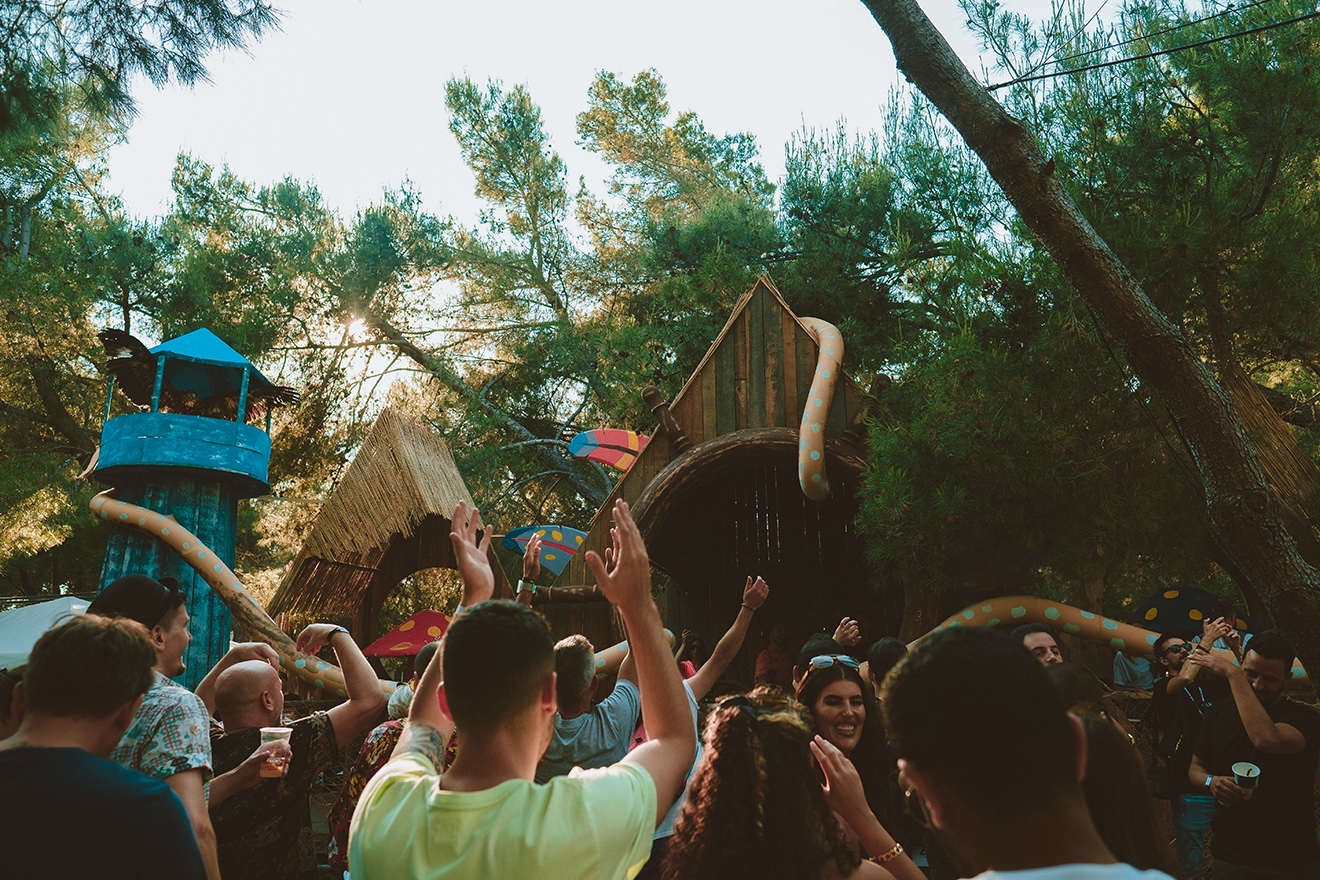 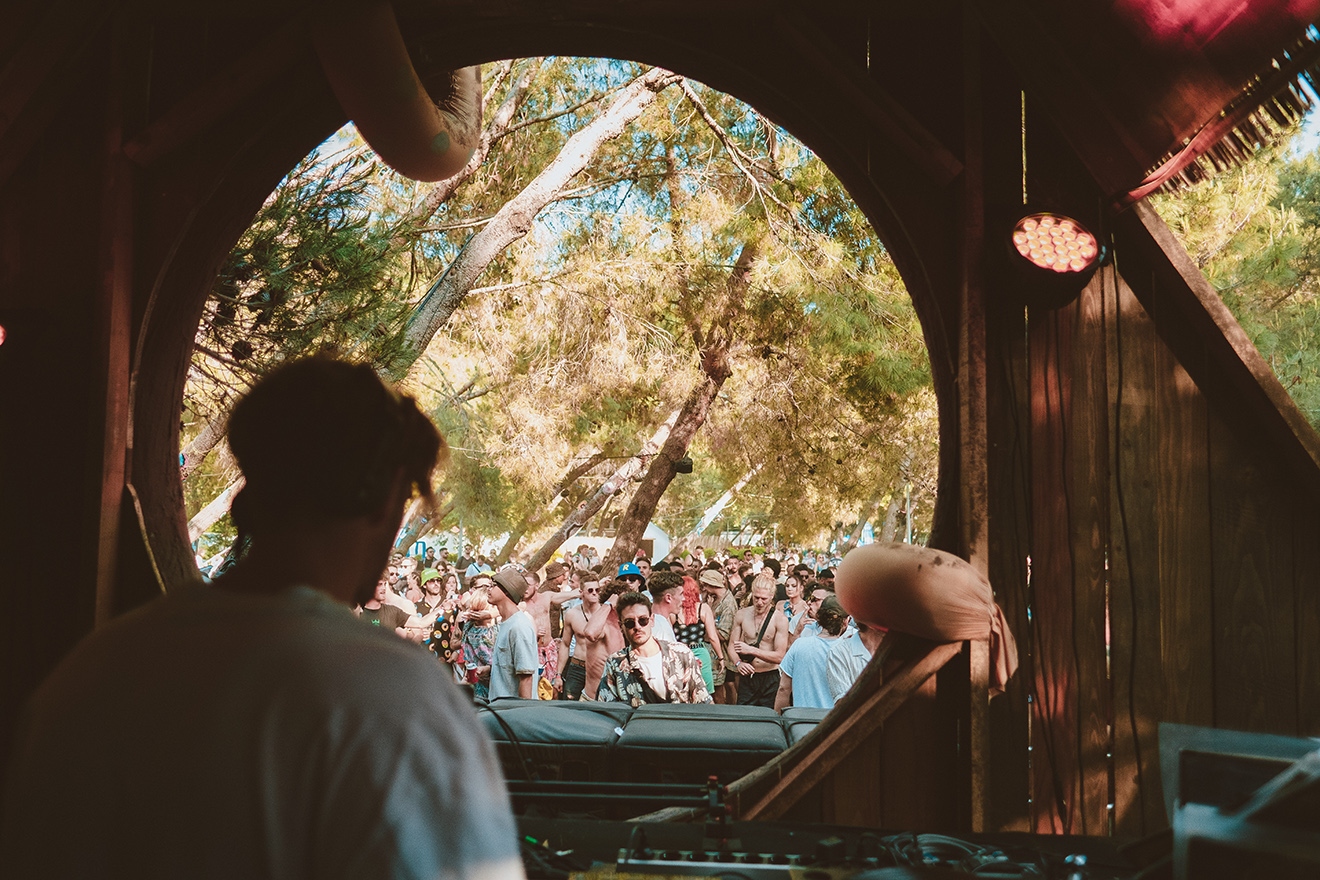 The morning of day five happened like a scene out of a zombie apocalypse film. Messy walkers sprawled out through the gates with as much sleep as a sweaty beanbag can handle, bodies peppered around the beach while the harsh morning sun threatened to burn everyone into sunstroke. But it wasn’t the end. Festivalgoers would later return to the party in a different location that night, back at a hotel situated just a short drive down the road. Most revellers stayed, somewhat miserably when the music continued during the night, at a collection of hotels nearby. “You can’t sleep here,” said one person. “It’s like I come home from the festival and there’s an even louder one going on right on my doorstep,” he laughs. But despite the drained look on every face by the final day, the crowd manages to pull themselves out for what could be the final party for a very long time.

The bittersweet feeling started to sink in as the afterparty kicked off by the pool, and Jamie Roy took over. The rain began again, but the British DJ stayed topless using his t-shirt to help cover the decks with the help of a couple of crowd members. People came down in their dressing gowns and slippers, but it wasn’t long before the party would reach a sweet sweet pinnacle. Spinning an Oden & Fatzo remix of Men I Trust’s ‘Lauren’, the crowd quickly got in shape for the final moments of UNUM as they screamed, jumped and stood on every surface they could find. It was the moment that gave a subtle reminder that the good times still exist, but the precariousness of pandemic life prompted a realisation that this might just be the final boogie for another little while. With a weekend fuelled by nothing but human connection and the tender reassurance that parties are still on the horizon, UNUM festival gave a whole new human perspective on partying.

From the depths of a five-day session, the final words rang out: “where’s the after-after party?”