Various rhythms build and fuse together as intricately constructed robots permeate electronic and organic sonic textures to create clicky, squelching and bassy techno. The performance is fascinating and bewildering, but the music itself provokes one to want to dance in a dimly lit nightclub. That said, it's a sound not commonly found in today's dance music industry, which is no surprise as the process for creating these magical tones and vibrations is singular to one person. This is a man and his machines, Moritz Simon Geist and his Robotic Electronic Music (R.E.M).

Hailing from Dresden, Germany, Moritz Simon Geist is clearly much more than a musician and producer. Before he was even thinking about making music or building robots, he fueled his fascination with the inner workings of machines by taking apart radios at a very young age. Yet music was always on his mind and he would later become a classically trained clarinetist and pianist. Now he also teaches on the progression of technology and society at the NYU Berlin. It's this blend of interests that culminates in his latest project and debut EP titled 'The Material Turn', produced in collaboration with Berlin's sound wizards Mouse On Mars.

Before the full release came to fruition, Geist's projects ranged from robotic music performances to robotic sound installations, which have graced stages at numerous European festivals and exhibitions. He also spent much of his time building a giant TR-808 replica featuring actual instruments, a project that has become legendary among gear heads. Now after several years of building, tweaking and testing all of his DIY robotic instruments, Geist is now finally ready to unveil his original music with an official release.

All of the sounds on 'The Material Turn' EP are played by Geist's self-made robots, constructed from small motors that beat on metal, futuristic 3D-printed robo-kalimbas and salvaged parts from old hard drives that click and cut. It's a miraculous display when viewed live, which is why Geist has paired his debut EP with a visual component that reveals his machines in action.

Mixmag sat down with Moritz Simon Geist on the eve of his debut release to find out more about the man behind the music and robots. Read on to find out what fuels Geist and watch the music video for the EP track 'Entropy' below... 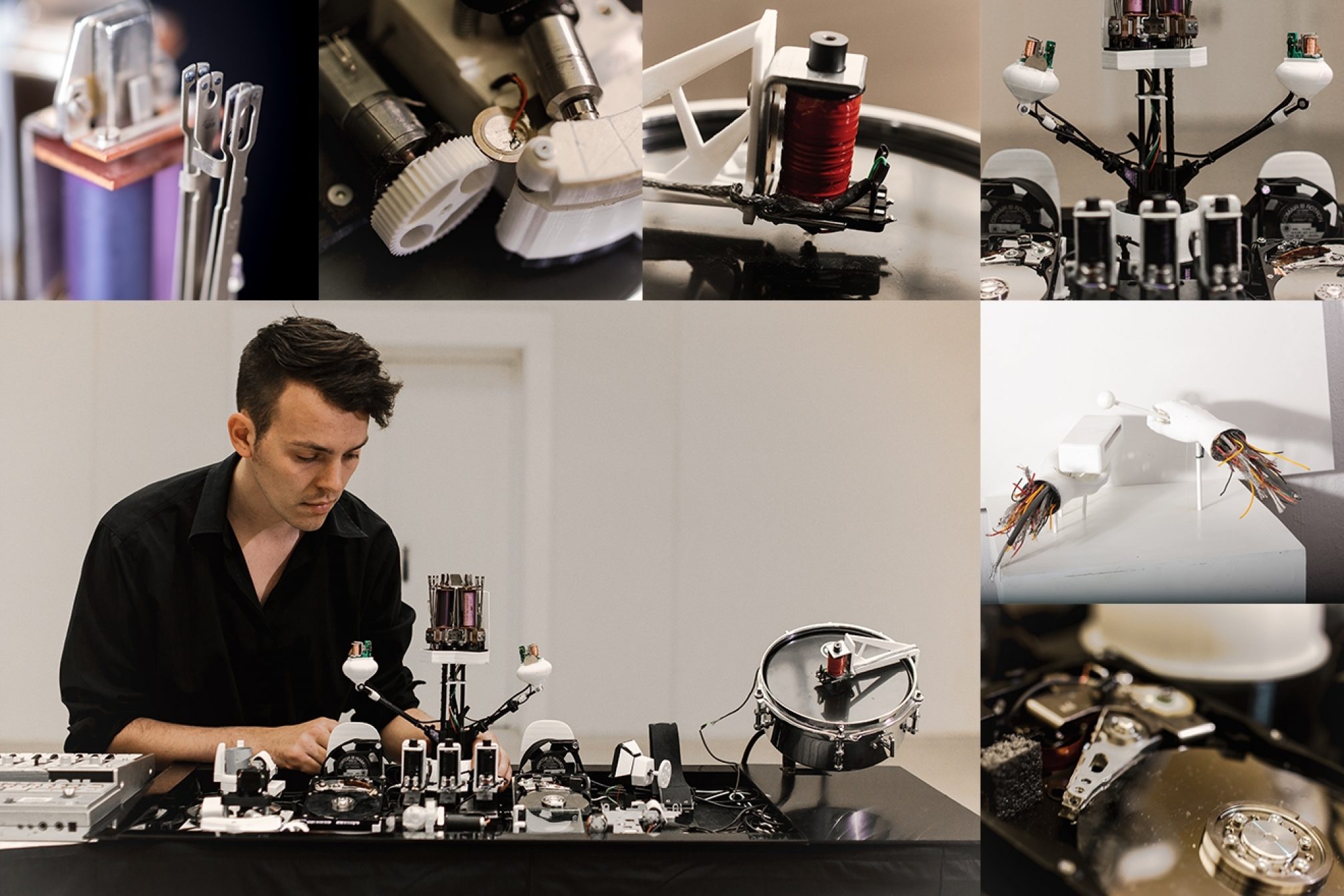 Tell us about how you developed your passion for electronic music. Was there a specific moment that sparked your interest?

From an early age I wanted to understand how stuff worked. I took apart my parents' radio to see where the music was coming from. They were not amused!

Later I discovered Tracker software, Scream tracker & Fast tracker, and got into sampling. But being a classically trained clarinetist and pianist I always had the feeling that something was missing when making music with computers. Even in electronic music and techno I didn't like that there was nothing I could touch. But since I really appreciated the repetitive and static character of synthesized music, thats when I thought, "maybe I should build something where I can control a robot and it plays techno, in real life."

What are these machines made of? Where do you get the material and what is the process like for you putting them together?

Initially I just took what I found on the scrap market, to make experimental sound machines. Old electronic parts from the street, an old piano I took apart, old vinyl players. The first MR-808, having no budget and no idea of artistic funding, had material costing around 500€. Later I acquired 3D-printers and got a lot more tools and a better workshop. Now my robots are mostly made of things I find which I like acoustically, drums, strings, metal, relays and things people give to me as a present, together with a lot of 3D-printed plastic parts and all the robotic actuators like motors, which I buy. But hey, whatever works! 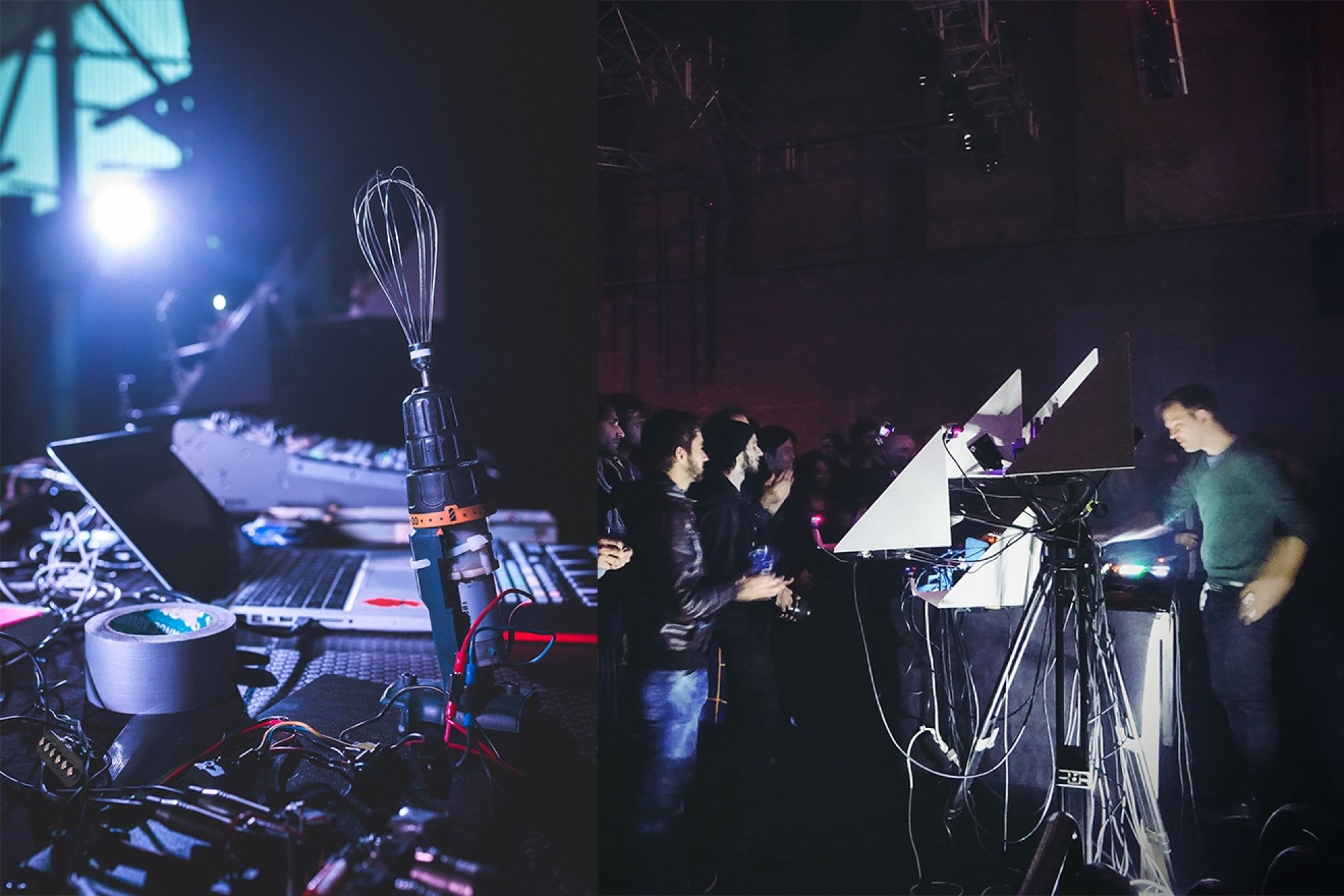 What was your vision for 'Entropy', with both the audio and visual aspects?


I wanted a visualization of robots playing together with humans, but in a very entertaining way, and without reference, my robots for example don't try to look like humans. I wanted the video to be understandable, and focused on the sound and aesthetic.

Then I started to work with my video filmer "cuthead" and he is a genius in telling a story and getting the video so that one can actually follow whats going on. In the end it was much different to what we planned - but it turned out great! 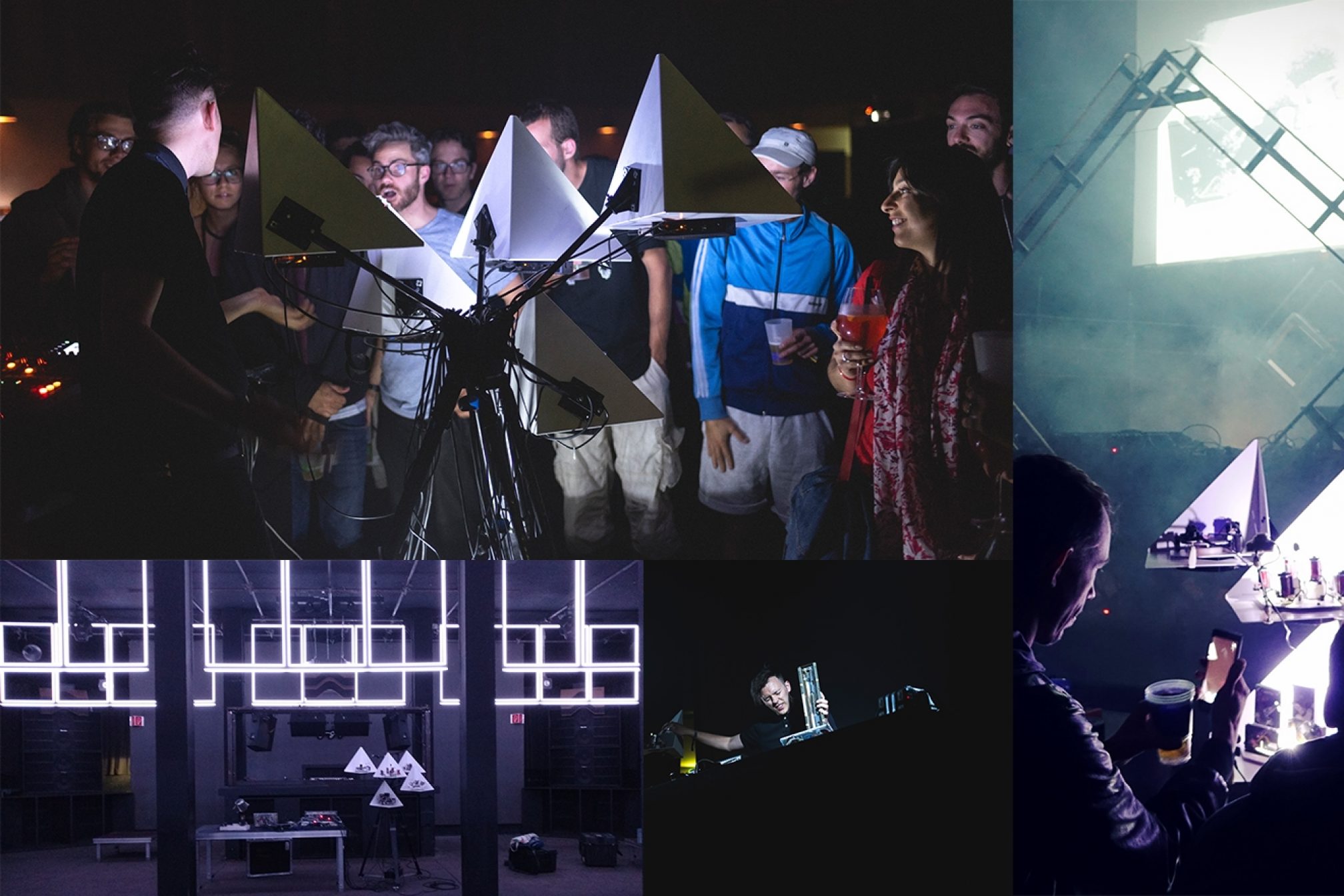 Your giant 808 robot is legendary among us music heads, what inspired you to construct that and what was it like putting it together?


It was a three year journey - and the biggest challenge was to keep focused. At that time I was finishing my studies at the university and I started with a lot of experiments. When one sees an artwork or instrument you always think "of course it has to be like this", and you take the actual object you're given. But whats hidden behind, is the process, the uncountable experiments and drafts that didn't make it to the final piece. To find a real-world counterpart for every instrument of the 808 was a big hustle. For example the Bass drum: the original sound of the 808 bass drum is iconic. So how would you realize this in the real world? I started with a real bass drum from a drum kit hit by a robotic beater, a motor. But it doesn't sound like a 808 bass drum at all. Then I experimented with other drums and metal tongues - and in the end a bass drum string. And after four to six drafts I had a working prototype, for a robotic 808 bass drum. It was a lot of experimentation. Now, with several years of experiments, a lot of reading, talking to other instrument builders and hacking its more planned.

Your highly-anticipated debut EP consists of four tracks, it is the first taste of your forthcoming debut album, can you tell us about the inspiration behind this project and what the music represents for you at this point in your career?

The EP, which is set for release October 12, is followed by the actual album, to be released on November 16. I have the philosophy, that a music instrument is only a medium. What counts is the music. The instrument definitely changes the way one makes music, but in the end its up to the content to convince people. Great artists can do incredibly and funny artworks with only some match sticks and a lemon! So I had been working on all this robots for several years, I met Mouse on Mars and got into their incredible thinking of how to approach sound. For me, it was always clear that a classic music record would at some point be very important. The record industry might be dying, but an album is still a great status report of your work. Also as an artist you are forced to present a status quo of your work and not just have a lot of unfinished projects laying around. So it's the big thing for me right now. And releasing it on my own label with help from the wounderful people at Kompakt and Mouse on Mars made total sense to me. 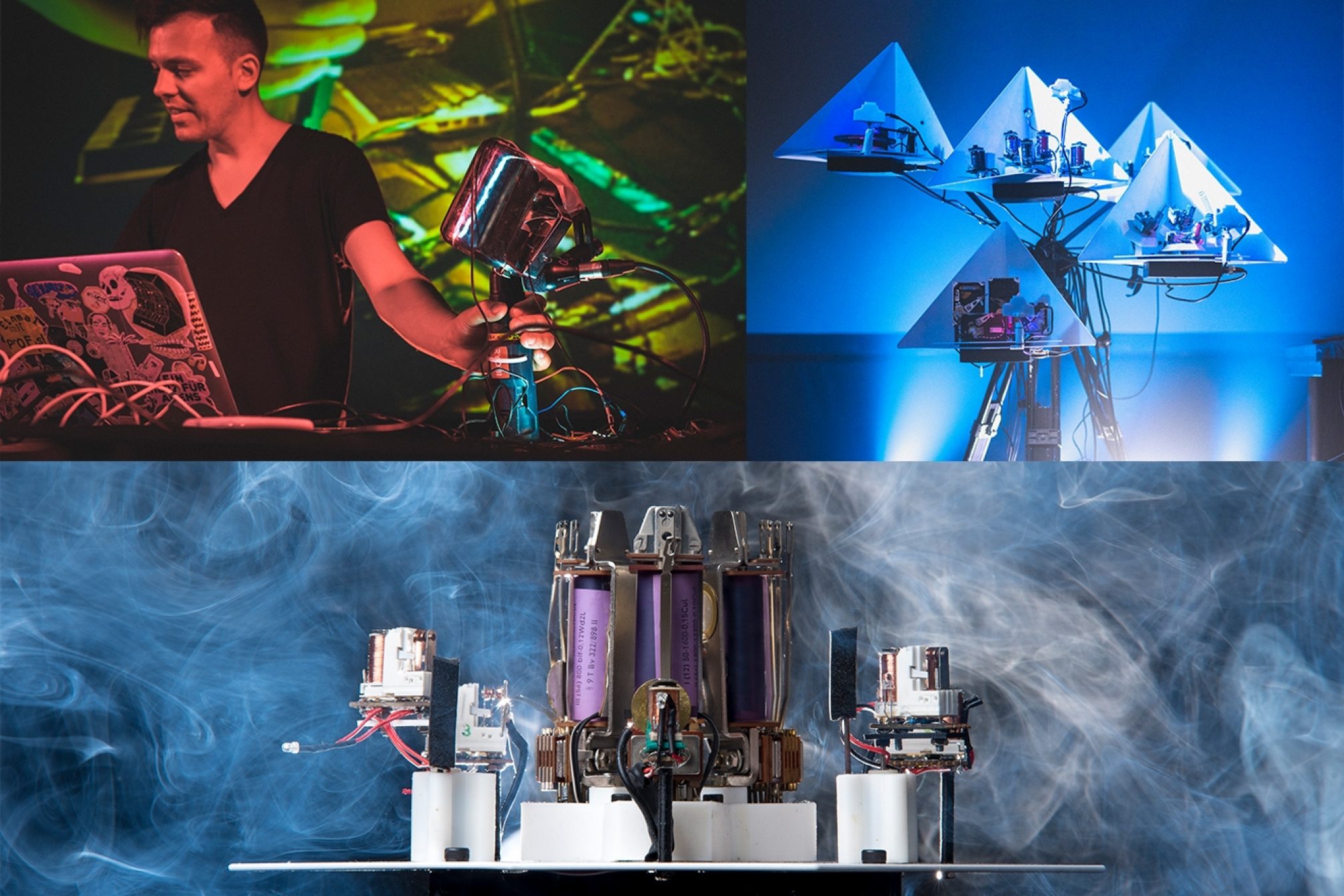 You also have a captivating and engaging live show, what is the process like putting it together? Is it a dance party or are people mostly fixated on the robots?


A friend said, that I work on the intersection of media art and a techno party, and I think it’s quite fitting. My goal is to make music only with robots and play so convincing that the audience forgets who actually produces the music after 15 minutes. If they wake up, its even more disturbing.

As I am touring a lot, my latest imstallation like the Tripods One installation are built pretty robust, for example they can be shipped with an airplane. This is a contradiction to the experimental approach of physical music making, but I hate it when I open one of my boxes after a flight and half of the robots are broken. So they are less experimental but more robust.

Whats next for you in the near future? Tour? More music? More robots?

More robots! More robots! I am already planning my next album - for this one I focused a lot on percussion robots, but I definitely have to work more with melodic robots. So yes - more robots!

Watch Moritz Simon Geist explain his techno robots in more detail via the behind the scenes video below.