It’s July 1996 and Leftfield are headlining the Slam Tent at T In The Park. The Chemical Brothers have not long departed the stage, and the tent heaves with a mass of sweaty bodies. To the side stands a six-year-old Georgia Barnes (daughter of Leftfield founding member Neil Barnes), looking equally awestruck and perplexed by what’s going on before her eyes. As their set comes to a close, band member Nick Rapaccioli grabs her from the side of the stage and places her on his shoulders. Dressed in a Leftfield top and waving her arms in the air, Georgia gets on the mic and screams “Leftfield!”

“The crowd went mad,” the now 29-year-old Georgia recalls more than two decades later, while sitting by the pool at her hotel in Ibiza. “I cannot tell you how many people were there, fucking having it.” After that T In The Park show – which remains, to date, one of the biggest crowds Leftfield ever played to – Georgia was desperate to get back on stage with her dad, and she laughs as she recalls being promptly dismissed when she asked to go on when Leftfield headlined Glastonbury’s Other Stage. “And I guess I thought, going into music, that it was all going to be like that,” she shrugs now. “Little did I know!” 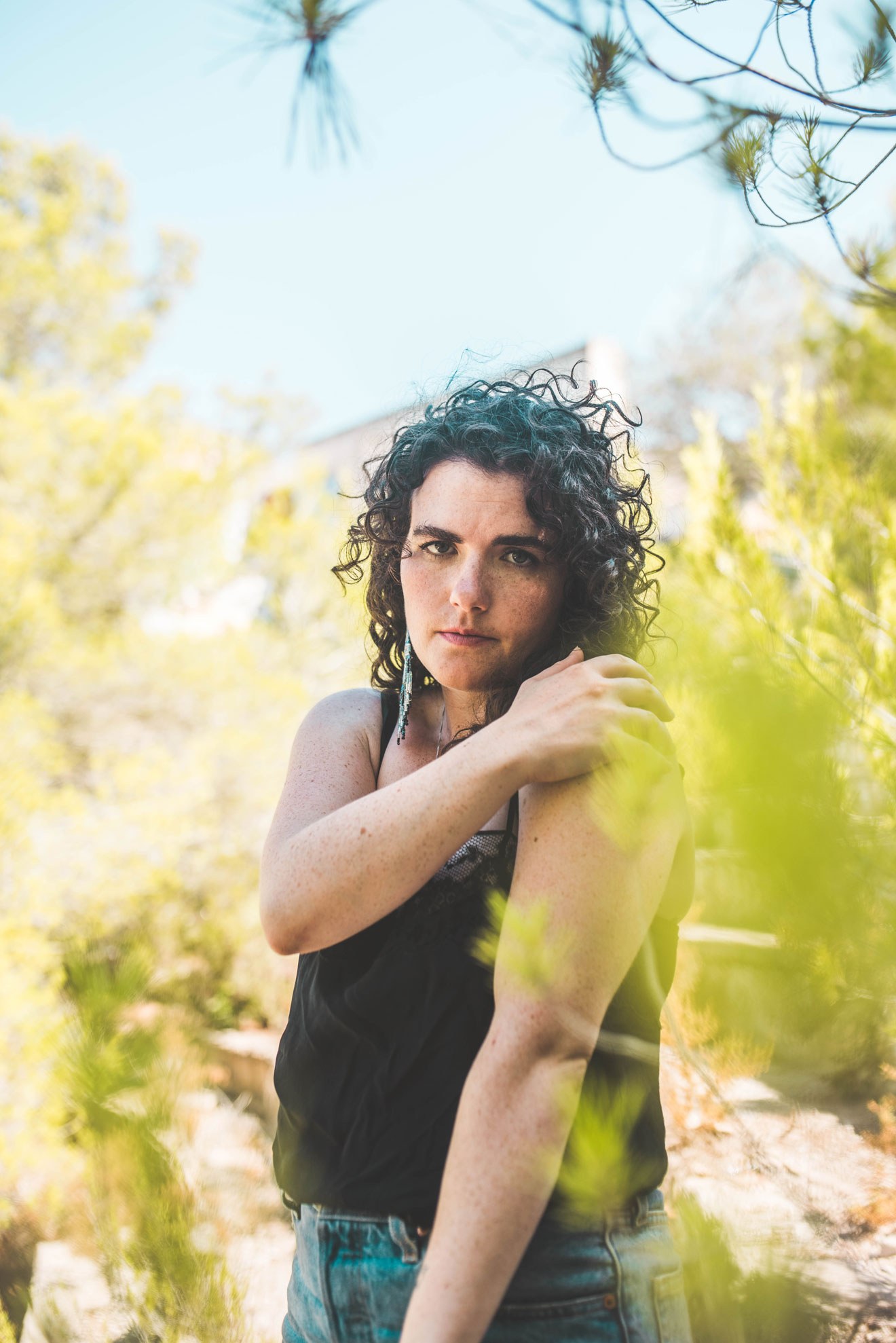 But the way things are going, Georgia could be in for a few ‘pinch yourself’ moments of her own. After a scuzzy pop and grime-indebted debut album on Domino in 2015, which in her words, “didn’t sell much, but was kind of critically acclaimed,” she returned in 2018 with the Chicago house-indebted ‘Started Out’. A fresh, dancefloor-focused take on pop, the track has as much in common with a Frankie Knuckles groove as Kate Bush’s spine-tingling top-lines. It’s been hammered across Radio 1, and has racked up almost 6m streams on Spotify. There’s never been any doubt (save, perhaps, during a stint as a youth team footballer) that music would be Georgia’s thing; it courses through her veins. She grew up listening to Joni Mitchell courtesy of her mum (with her finger still firmly on the pulse, it was Georgia’s mum who introduced her to Billie Eilish), and learned about reggae, techno and soundsystem culture through her dad. ‘Leftism’ was recorded in her childhood bedroom, she started playing drums when she was seven, and she taught herself to produce on a four-track cassette recorder at just 13.

Georgia is in Ibiza this weekend to play a DJ set at Pikes and a live show at Savannah on the sunset strip, while her team capture video footage to use around the release of the album. “We could just run around Zoo [Project] filming the animals on GoPros,” Georgia suggests with a distinctive London twang, giggling over a glass of Cava. With a light and easy-going demeanour, she chats as animatedly about cricket (repeatedly asking for the Ashes scores), as she does about vegan cooking or Fever Ray. She hasn’t been to the White Isle since her parents brought her as a child. “I wasn’t really into the idea of coming to places like this,” she admits, adding, “obviously now I’m a convert.”

And she demonstrates her new-found love for the island later that night as she spins her first ever public DJ set at Pikes, a venue so steeped in excitement that she might as well have named her forthcoming album (‘Seeking Thrills’) after it. During her set, she peers over the booth a couple of times to check on her mum, who’s dancing front and centre. Reaching for Ibiza classics like Joe Smooth’s ‘Promised Land’ and a handful of Inner City records, the dancefloor slowly starts to fill as she brings in The Black Madonna’s remix of her new single ‘About Work The Dancefloor’ and Marie Davidson’s ‘Work It’. “I feel great now!” she tells us, once the set’s wrapped up. “I suffer from bad nerves, so after I play I get this huge adrenaline rush.” 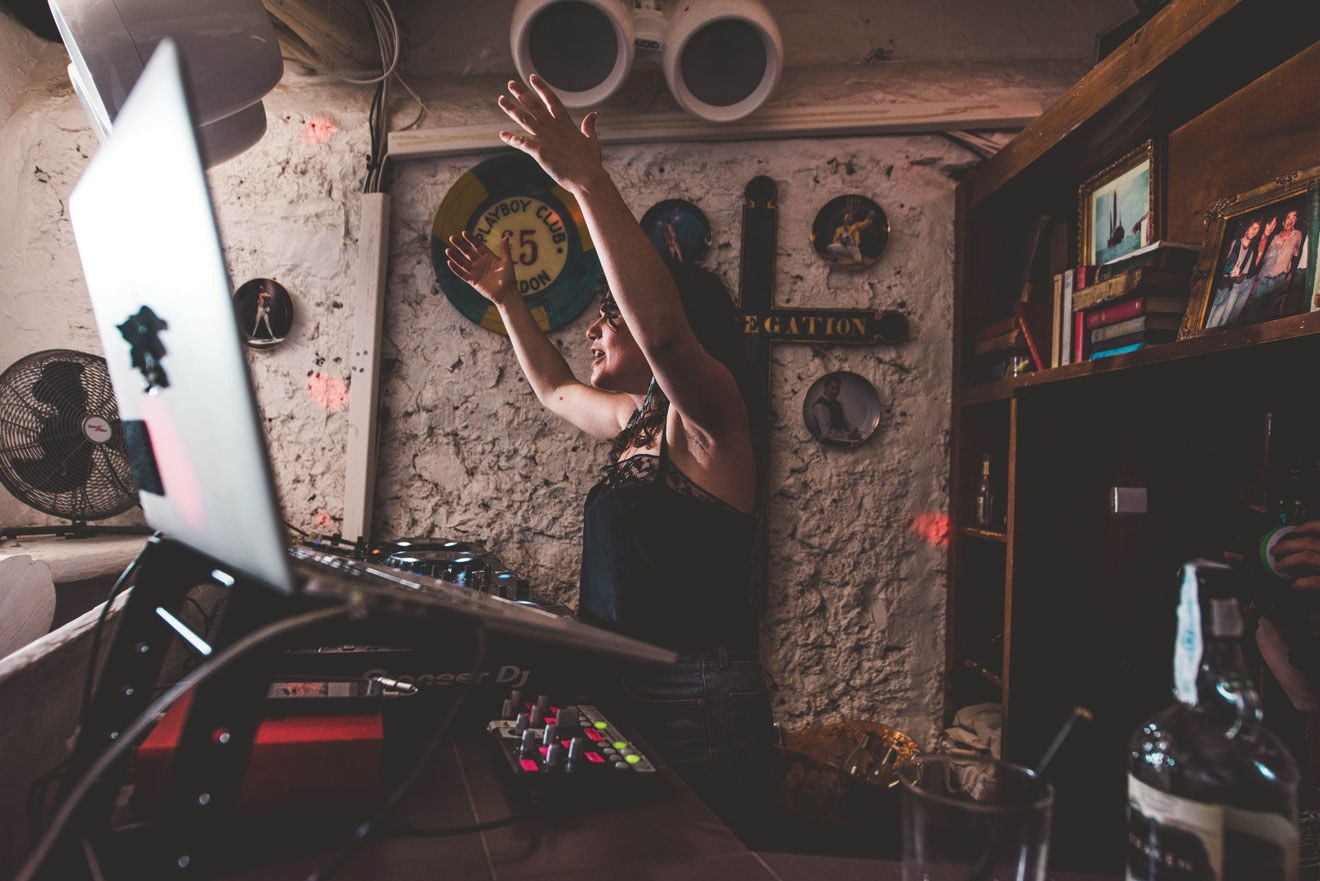 Growing up in a bedroom surrounded by her dad’s drum machines, Georgia was always destined to find the rhythm – and before embarking on her own career she was a session drummer for the likes of The xx, Sampha and Kate Tempest. “It was a way of making money while working on my own music,” she tells us, and it was a stint with London producer/songwriter Kwes when she was 21 that persuaded her to throw her all into her own productions.

“I remember playing him a song,” she recalls. “He said it was great, and that was the catalyst I needed to be serious about it. I started finishing songs and playing them to people.” This led to meeting her manager, Rough Trade’s Jeannette Lee, and in July 2014 they arranged a four-date residency at Stoke Newington venue The Waiting Room, where she was picked up by an A&R from Domino Records.

For Georgia, her debut record was an experiment. “I just thought, ‘Fuck it, let’s see what happens’,” she explains, “then as soon as it was out, I knew I had to step it up, make my music more accessible and hone in on songwriting.” In the years since, Georgia has been soul-searching on dancefloors across Europe, and “in a rabbit hole” exploring the history of dance music. Berghain showed her “how clubs are supposed to be”, and her eyes widen as she tells us how another party in Berlin with Vladimir Ivkovic and Gatto Fritto “fucking changed my life”. After a show in Holland, Georgia took her team to catch Ivkovic again. “It was this long, obscure journey – he moulds his sets over hours. I think that’s what’s so creative about DJing,” she says. A period of sober clubbing gave her a new-found understanding of the role of the DJ, and she says she had a clichéd moment watching one of her friends “Lift people out of their everyday lives”.

“A good DJ is as good as any band you’ll ever see,” she maintains. In the midst of a deep dive back to the golden years of Larry Heard, Robert Owens and Frankie Knuckles in Chicago, and “kids [notably the Belleville Three] discovering drum machines and sci-fi” in Detroit, Georgia became intrigued by the UK’s affinity for picking up underground sounds. “How could a Depeche Mode song be number one?” she ponders, brow furrowed.

As a teen she would spend days rifling through techno 12”s in Soho’s many record shops and Georgia’s brand of ‘pop with an edge’ draws as much inspiration from a Chicago house groove as it does a crisp 808 rhythm from Detroit. She’s also been helped along by another dance music deity in the shape of The Black Madonna. The pair met when Georgia came on board to assist with production on Stamper’s first album (an ongoing project), and it was seeing Stamper DJ that brought Georgia out of a years-long disillusionment with London clubbing. 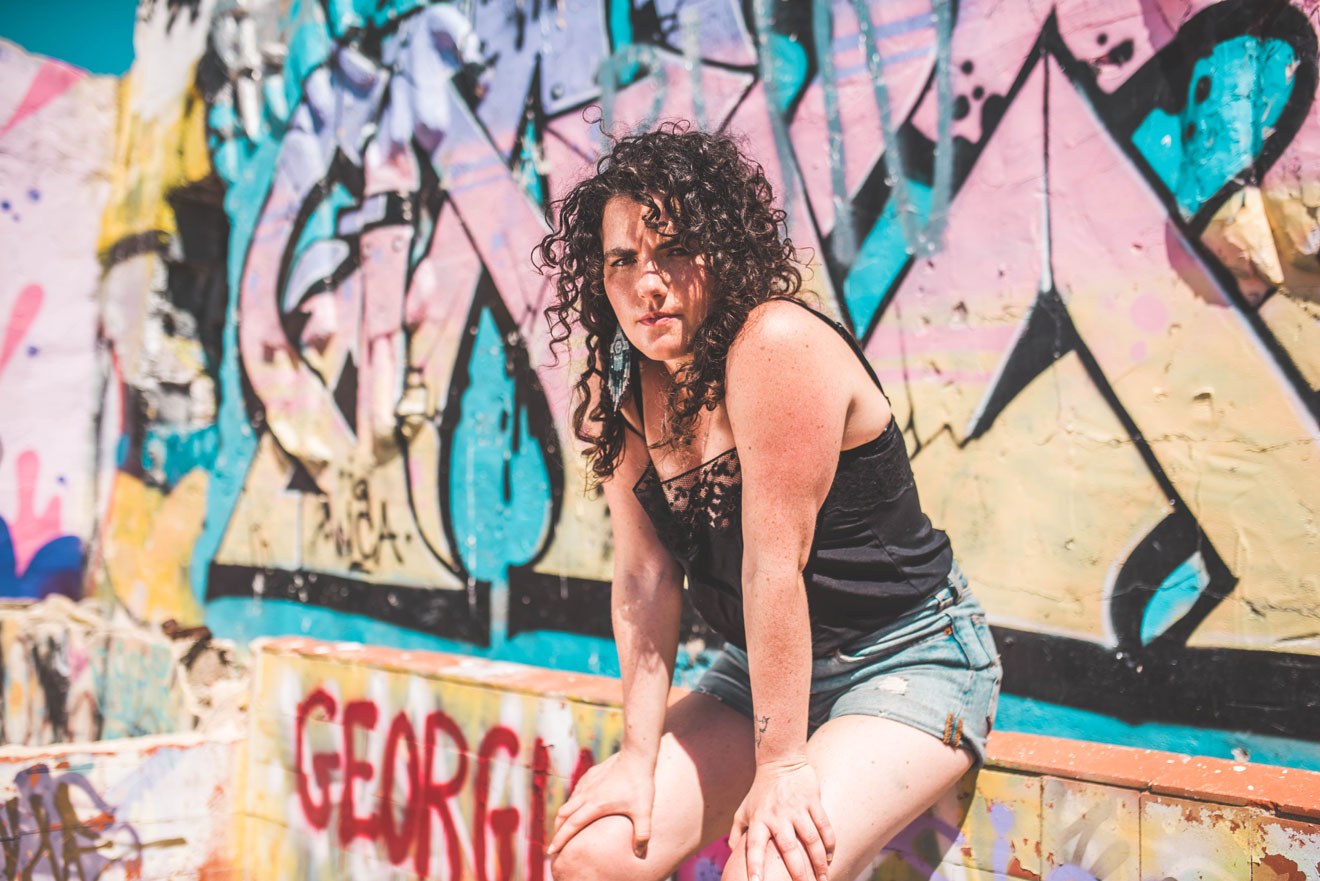 “Georgia is insanely talented,” Stamper says, “so working with her has been very inspiring and a lot of fun.” As they’ve forged, in Stamper’s words, “a once in a lifetime connection,” Georgia appreciates the way their lives have been soundtracked by music in an equally profound way. “Marea’s identity is house music, and gospel, soul and funk,” she says, smiling; “these genres changed her life, and I can really relate to that.”

Stamper has also had an impact on Georgia’s live show and the energy she seeks to ignite in the crowd when she plays. “It’s a participant relationship,” she says of The Black Madonna’s DJ sets; “there’s a feeling of total love.” It’s that same synergy Georgia felt when she played The Park at Glastonbury this year, a set she describes as “a big pile of love”, and it’s why Georgia is a solo project – she plays alone on stage, just her and the dancefloor. “There were some fans, but it was mostly new people,” she says of her Glastonbury set. “It was really great to be able to turn them on to my sound.”

She’s also found a mentor in The Flaming Lips’ Wayne Coyne since the pair met at Wilderness Festival in 2016, with her taking trips to visit him in Oklahoma where they paint canvases and make music together. “He’s someone who threw the rule book out of the window, you know,” she explains. “He taught me to do what you want to do and do it yourself.”

As for doing things your own way, Georgia seeks to “push that three-minute pop structure” with her new record. Stand-out warped electronica track ‘Mellow’, with Shygirl, borrows from the drone of the vocal on Cybotron records, and ‘About Work The Dancefloor’, with its insanely catchy melody and soaring synths, achieves a weightless sense of euphoria in the same vein as Robyn or Christine And The Queens. Across the rest of the album there are driving rhythms and feisty lyricism in ‘Feel It’ and ‘Ray Guns’, more intimate moments in ‘Ultimate Sailor’ and closer ‘Honey Dripping’, and more glittering pop cuts like ‘Never Let You Go’ and ‘I Can’t Wait’.

The sun sets, the crowds clap, the beat kicks in a moment down the strip at Café Mambo, and Georgia is ready to play. Mum appears, fresh from a day in bed nursing a Pikes hangover, and she’s welcomed back with a light-hearted round of applause. Georgia opens with ‘Started Out’, and a guy walking past tells his friends, “I saw her at Glastonbury, she was sick!” In front of the group, who are clearly on a lads’ holiday, there’s a group of young girls, wearing floaty dresses and staring at Georgia in adoration. In her amalgamation of a pop sensibility with club-leaning production – album cut ‘The Thrill’ (feat Maurice) is an ode to Chicago house, and the percussive interlude is electrifying to watch live – Georgia’s approach has mass appeal, for fresh-faced pop fans and thrill-seeking dance-heads alike.

There’s a line in ‘About Work The Dancefloor’ that goes, “Stay a while, to be in a moment with you.” Georgia doesn’t have a whole lot of time right now – “A holiday? Forget it!” – but what’s clear is her investment in making every moment count. “This is a career, [I’m] not a one-hit wonder,” she says determinedly, “but I think the important thing is to enjoy it. Who knows where this journey will take me?”

Moodymann reveals his new five-track EP, 'Sinner'
Unreleased Moodymann LP purchased for over $500 on Discogs
Detroit is the birthplace of techno and it won't let you forget it
Get the best of Mixmag direct to your Facebook DMs