Exploring identity: What does it mean to be a South Asian in the UK in 2021? - Features - Mixmag
Home Latest News Menu

“It’s complicated,” says producer and DJ Yung Singh. “For a long time, the term ‘South Asian’ was used to describe a particular demographic that was often quite privileged. That privilege comes in many different ways, whether it's caste, sexuality, gender, and socioeconomic position. Often people like myself would not really be authentically represented by something that was South Asian.”

South Asian identity has always been amorphous, in a constant state of flux. In the early 2000s, the dissolution of the British South Asian Underground fell alongside the terrorist attacks of September 11, 2001, an event that changed the trajectory of how South Asians worldwide were perceived. Terrorism was closely aligned to Brownness and when the white gaze fell upon us, we continued to be pigeonholed into Bhangra and Bollywood. Over the next ten years, the reductiveness of these racist stereotypes led to the rise of hip hop acts such as Das Racist, who successfully countered them with humour. M.I.A’s worldwide fame led to a South Asian artist being in the spotlight, while seminal producer Jai Paul’s leaked 2013 album, formally released in 2019 as 'Leak 04-13 (Bait Ones)', suddenly brought a sense of cool to how South Asians were perceived.

Yet, since then, despite the success of underground scenes in South Asia itself, as well as the UK diaspora building up to the point of successful Boiler Room takeovers, this publication’s South Asian Series and a festival focused on South Asian culture, the idea of what South Asian-ness today actually is lingers in the air. As the British diaspora continues to exert influence on underground culture, we have still been painted under one narrative brush as South Asians when, in fact, there is a multitude of cultures, religions, narratives and stories to be told.

Despite very much being one of the leaders of this current generation of South Asian talent, Yung Singh, interestingly, positions himself outside of the term. “I never really describe myself as South Asian,” he explains. “If anyone ever asks me, the first thing I would say is ‘I’m Punjabi. I’m a Sikh.’ More specifically, ‘I’m British.’ What does being South Asian mean? It's more of a term used to rally a lot of people from similar backgrounds.”

Within South Asia itself, political borders have become steel doors through which most people cannot pass. Meanwhile, the diaspora has been banding together under an umbrella to show unity. There are elements within this - the Bollywood samples and edits, for example, - which may feel exclusive to those who never grew up with these references but still identify as South Asian. “When you see these viral clips, that shifts the narrative,” London-based artist DEBONAIR says. “It’s great because of visibility but it also means: what is the message going out? Controlling our narrative is also being mindful of what our narrative is.”

As we push ourselves into a more visible space, the idea of what it is of our culture we want to be portrayed in should lie in our own hands. Bollywood edits belong to a subset of people; some of whom, like DEBONAIR, may feel excluded from. “I don’t know anything about Bollywood,” she says, “so I don’t want any kind of ideas placed upon me because it’s been very important to me to not be misrepresented, and I've always been fighting. [Bollywood edits] don't feel authentic to my personal experience, and my DJ sets are not based around that.”

The idea of British South Asians unifying under one umbrella can be traced back two generations to a time when we ascribed ourselves to another race. “Historically, you have to go back to the 70s or even perhaps the 60s in the UK where we’re talking about political Blackness,” renowned percussionist and jazz musician Sarathy Korwar says. “The idea that all non-white people could come under the umbrella of politically Black because that term was very useful at the time, but also problematic because it was a blanket term that didn’t take up everyone’s hierarchies.” That argument can now be extended to today where South Asian-ness doesn’t take into account the necessary hierarchies and oppressive structures colonialism and generational issues have left behind. Though, those conversations are now being had within the community to ensure inclusivity.

Read this next: “We exist in more than one narrative”: Sarathy Korwar & Idris Rahman in conversation

“What’s important to note,” Korwar continues, “is that a scene exists partly as a manufactured environment but also partly also to do with community. Maybe it's not going to speak to everyone – I think it's gonna be incapable of speaking to everyone, because part of what we're fighting against is that everyone is the same. So in recognising the fact that South Asians are no one thing, we also recognise that this scene is not going to cater to everyone, because we exist in the diversity of many people, and different likes and tastes.” 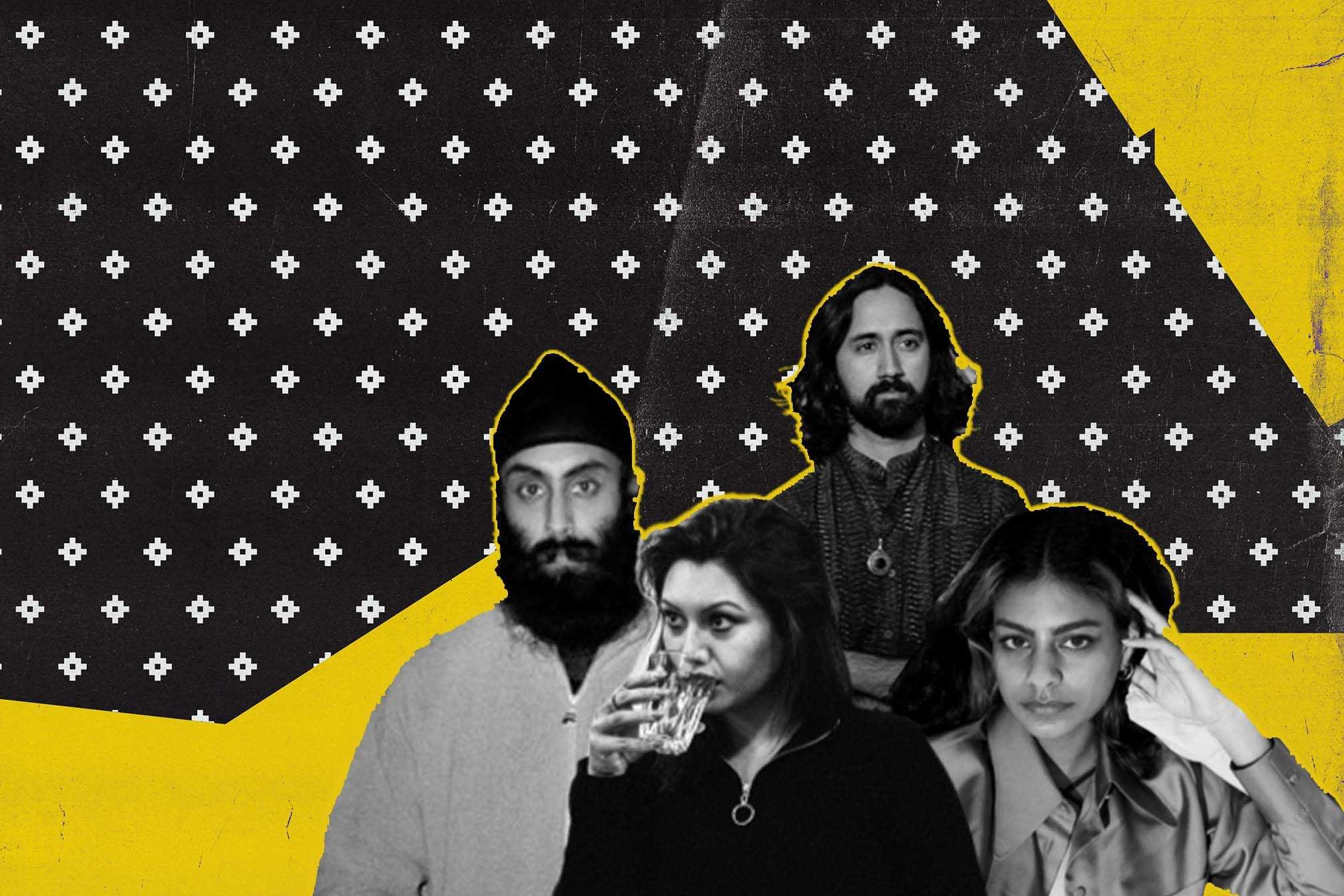 For many, the umbrella term of South Asian has been useful in pulling people from disparate backgrounds to huddle together and find a community in the face of an oppressive and fickle white gaze. Though her technically superb DJ sets and alluring artwork has nothing to do with South Asian culture, the London-based artist anu is effusive of the community due to finding like-minded peers. “Only in the last three years did I put myself under that term [of South Asian],” she says. “For the first time in my life, I’m proud. We've always kind of been pushed down. I think there's been a huge shift in that itself which is massive.”

For Yung Singh, the Punjabi Garage mix he released last year helped reinforce his comfort with his culture. The reaction, in particular, helped him validate his feelings surrounding wanting to promote, understand and uplift his culture. “It was a case of ‘this is a very authentic representation of who I am,’” he says. “Also, what being Punjabi in the diaspora is like. The reason I put it out was because I was annoyed at the narrative that was being spun around a UK Garage revival [which] leaned heavily on middle class white men. I was like ‘hold on, I’m not included in any of these conversations. I’ve been listening to garage longer than you guys have.’”

Similarly, emerging rapper Surya Sen found himself wanting to make music due to the rise of the South Asian scene again. Though he identifies as Bengali, Sen wants to define that his music isn’t rooted in any kind of traditional South Asian sound. Instead, it is a fascinating mix of skips of electronic music amalgamated seamlessly with the ferocious energy of hip hop. “I don’t need to inject South Asian-ness into my music as I am South Asian,” he says defiantly. “You don’t have to push it on people. It’s just who you are. There's this pressure to be a part of that thing, but I really think right now is everyone breaking all these preconceptions.”

To get to this point, though, has not been easy for many. “Personally, I’ve been in the industry for a decade already and it’s been lonely,” DEBONAIR says. “Society is inherently racist and it's also incredibly hard to be a woman in it. When I first came into the industry, I was very much seen as a subservient [South] Asian woman.”

Despite the current success of the scene, there is still a long way to go. No one can be sure whether we can control this narrative. There have been peaks and troughs with these movements. These scenes need fundamental infrastructure and a path towards a concrete future. In saying that, the way South Asian culture has been depicted has come a long way. “We're still trying to break, you know, these ideas of who we are and what we can create.” Korwar says. “In a way, I feel like maybe there's a certain acceptance a little bit more of who South Asians are and what we're capable of. It’s obviously a lot of work.”

One of the ways we need to ensure that being South Asian is defined on our terms is ensuring inclusivity and progress. Conversations around class, caste, gender and race need to be occurring. “For me, being South Asian is dedication to constantly educating myself,” London-based DJ, presenter and illustrator anu says. “We can’t basically ignore racist or the caste system. I think there has to be a lot of education done in terms of knowing the history, so we don’t repeat that in any forum. These things ensure that this is more than just a moment but a movement.” The work needs to continue to happen after this initial energy naturally wanes off, the onus is now on the community itself to uphold ourselves to a certain standard. “We need to have these conversations at an early stage,” agrees Korwar. We cannot allow ourselves to get to a stage where the people in power in these communities act as gatekeepers.

“One thing we need to remember,” Korwar adds, “is that if another scene develops in Bristol or Bradford, we need to remain inclusive of these spaces and try and build coalitions rather than try and compete. Otherwise, some of the white gaze goes towards the scene in Bradford, and we start losing the same momentum. While the point is to differentiate between where that focus and attention is coming from and still be doing the hard work and build alliances across the world. We need to stretch as far and wide as possible and not start competing with other so-called scenes that have the same kind of philosophy or principles behind them.”

Read this next: A deep dive into South Asian electronic music

“I’m trying to remain in control of how our narrative is being pushed out,” DEBONAIR says. “I think it’s important to be a little bit protective with that to ensure inclusivity. I think everyone needs to be quite mindful of this.”

Yung Singh, whose iconic Boiler Room set, acted as an educational tool, showcasing British South Asian culture, in particular, the Punjabi music he grew up with. “We have a 1000-year old culture that has an unbelievable history,” he says. “I think it's just sort of changing people's perceptions. giving them something to pique their interest, and for them to go and do their own research and digging as well.”

Currently, the white gaze, as it continues to act as a gatekeeper to the music industry, is upon our culture, helping promote it. There’s no guarantee whether next year will possess the same energy that this summer has; but what we can be sure of is that the South Asians within the scene will still be fighting. Though we may all define and see ourselves – and to an extent South Asian-ness – on our terms, ultimately, having a community to work from allows us to stick together when, naturally, the attention starts to fade.