Andrew Weatherall was the greatest. He was a legitimate contender as both best DJ and best remixer of all time, a masterful producer of his own and others' music, a sonic revolutionary who stamped his mark on multiple generations of subcultural history, a scene stalwart with anecdotes for days... and that's only the start of it. As well as his musical achievements, he was also a scholar and a gentleman, someone who never lost a hunger for knowledge and understanding, and who delighted in sharing what he'd learned. Where others of the acid house generation became jaded or set in their ways, he only seemed more enthusiastic and open minded in his musical discovery with every passing year. As such he was a beacon of inspiration to others, a reminder that the world is full of wonders if you only take the time to look in unexpected places, and that being a participant in our culture is about far, far more than just serving up a product for others' consumption: it's a way of life in the truest sense. He was also kind, funny and generous, the antithesis of a lofty superstar, despite the fact that he was worshipped with an intensity inspired by very few. (Who else, after all, could have an entire yearly festival dedicated entirely to them?)

Weatherall was a polymath from the outset. His teens and early 20s in Windsor, Berkshire, were spent knocking around the post-punk scene, starting to make inroads as a freelance music journalist. Quickly he gravitated to musicians like Throbbing Gristle, Jah Wobble and Jamaican dub producers who spread their net wide for sounds and weird ideas. When he discovered the Balearic aesthetic, he was instantly able to connect the weirder and darker electronic records being played in Ibiza by DJ Alfredo to this lineage, and create his own deep narratives through diverse tracks. When he linked up with Cymon Eckel, Steve Mayes and dyed in the wool soulboy Terry Farley to form the Boy's Own crew – united by a love of clothes, music and adventure – Weatherall provided not just an extra musical edge, but a devilish turn of phrase and razor sharp observational skills that made their fanzine every bit as important as the parties they started to throw. As the acid house wave broke, Boy's Own were the grit in the oyster, a punky, mischievous counterpoint to too much wide eyed optimism, providing vital commentary on the revolution even as they were participating in it.

From the parties came connections with musicians – generally wayward ones, like the Happy Mondays, The Farm, and of course Primal Scream. Completely unschooled in the studio, Weatherall nonetheless went in with engineer Hugo Nicholson and rewired Primal Scream's soul/rock ‘I'm Losing More Than I'll Ever Have’ into ‘Loaded’. A looped Soul II Soul beat, a sample from a Peter Fonda biker movie, turn up the trumpets and backing vocals, boom. Doors between indie and dance, charts and the underground were kicked off their hinges, and Weatherall's lifetime of unfailingly brilliant productions and remixes started. His work with Nicholson through the white heat of the early 90s remains awesomely, cosmically joyous – for all Weatherall's pretension-skewering sharpness and love of musical darkness, he has never been a cynic about celebration and pleasure. Whether it was the cascading giant harpsichords on the “American Spring Mix” of the Scream's ‘Higher Than The Sun’ or the sultry country-soul-dub of their work with One Dove, they constantly found new ways to express the happy delirium and sense of possibility of the time. Through their titles and samples, too, they constantly introduced acid house and indie audiences to deep musical history: Lee Hazelwood and Nancy Sinatra, Throbbing Gristle, Prince Far I, Brian Wilson and more all seeped into young minds as a result. 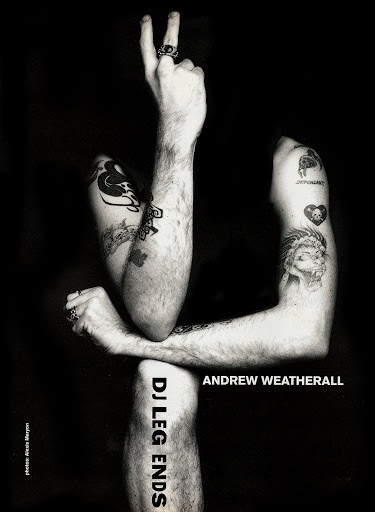 As a DJ, Weatherall was just as successful. From playing entirely diverse Balearic type sets, he proved able to specialise in any style he put his mind to. He could play to crusties or soulboys, indie kid students or Italian fashionistas, and win them over. He wasn't even a techno fan early on, yet when he eventually fell for the sound of – as he put it – “panel beaters from Prague”, he quickly rivalled the best in the world in that sound too. His success through that decade easily equalled Paul Oakenfold, Carl Cox and Laurent Garnier, but – and this is absolutely crucial – he never wanted to play the superstar DJ game. Though by his own admission he got stuck into the lifestyle as hard as anyone, and was by no means ego free, he always expressed this by taking sharp left turns.Whether it was taking on the persona of Lord Sabre (to go with The Sabres Of Paradise trio he formed with Jagz Kooner and Gary Burns) or becoming obsessed with the underground comic character Bastard Bunny, he always found an outlet for that ego a little more creative than simply giving it the big “I am”.

This series of turns away from the easy option might well have stopped him having mansions in LA and Rimini as he so easily could have if he'd been a bigger fan of doing the very obvious, but it is precisely what kept him vital for the rest of his life. In the mid 90s, while his contemporaries were getting more and more banging in bigger and bigger arenas, he created the Bloodsugar alias (with David Harrow) and club night of the same name in London, pre-empting the sultry ultra-minimal techno that would sweep Berlin. Very shortly afterwards, he formed Two Lone Swordsmen with Keith Tenniswood, indulging a love of electro and soundsystem bass. And there's been so many other studio partnerships to boot, each with their own unique sound: The Woodleigh Research Facility with Nina Walsh, Lords of Afford with David Hedger, The Asphodells with Tim Fairplay, and more besides. Each one showed that Weatherall's genius in the studio was as much that he listened as anything else – when remixing he heard things in the source material that nobody else could, and when co-producing he deferred to, then amplified, the unique skills of his collaborators, his open ears themselves enacting a kind of alchemy. 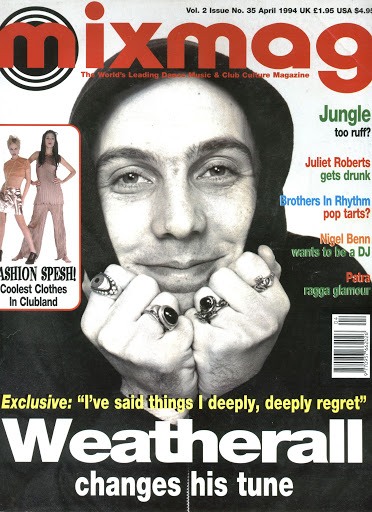 His achievements would take a book to list. Suffice to say that there was not a single year of his career when he didn't deliver a remix or production that was up there with his best, and his DJ sets – often three clubs a weekend to the very end, plus his regular NTS radio show, playing everything from the deepest techno to the rawest rockabilly, cosmic ambient to apocalyptic dub – continued to win hearts and minds over and over again. His A Love From Outer Space sets and parties with Sean Johnston have lately symbolised a kind of never-ending groove: never about the big splash, always about the regular crowd, the sense of a party, the low-key promotion of something that regular punters knew could be a profound experience. And that's precisely the point. Weatherall always emphasised the importance of putting in the work, over and above any sense of novelty or forced achievement. He never wanted to make bigger and bigger records, or reinvent anything: just to continue being around the people, sounds and ideas that he loved. His prolificness and creative generosity weren't about trying to win anyone's approval, but out of this undimming delight in dub, in disco, in subculture, in weird ideas, in sound and in people, came ever more inspiration.

He could easily have been one of our great cultural commentators too, being as great a student of leftfield writers and raconteurs as he was of music. His close friend and publisher Lee Brackstone was continually pestering him to write a memoir, which would have been a thing of wonder, even though Weatherall continually claimed not to remember most of his professional life through the weed haze and afterglow of the 90s. But even with a very, very few words, Weatherall could draw you into his world. Just last month, the week after New Year, he delivered a note perfect beat-free cosmic-ambient mix for his NTS show: two hours of radiant, spiritual sustaining magic, precisely what everyone needed that week. During the show he only said these words, in his typically deadpan tones: “dusting the ornaments on the mantelpiece of your mind.” It was a flash of casual brilliance: foolish, hilarious, but at the same time absolutely spot on, perfectly describing the function of this deep and intense music, making you snap to attention and enjoy it even more. This combination of insight, personality and ability to come so close to musical perfection, undimmed by thirty years plus of hard work and indulgence, was utterly unique. And we all thought that he would be doing this for decades more to come yet. The gap left by Weatherall's departure is too much to comprehend, individuals and institutions are today shaken by his loss. But his legacy is undeniable: he's given us not just records and DJ sets, not just personal memories, but a whole way of being, a whole approach to this culture that we should never, ever forget.