São Paulo's not for the faint-hearted. As the plane descends towards the city's airport, you're greeted with an endless sea of towering buildings. A sort of Dominoes of dystopian grey and white concrete high-rises that could swallow you up and spit you out if you're not prepared for the vast Brazilian city. That said, Red Bull were on-hand to make sure that didn't happen to us during the second Red Bull Music Festival São Paulo.

The stop-off in Brazil's most populous city was part of Red Bull's continuous travelling around the world. Festivals have taken place in Moscow, New York, Los Angeles, which we attended last year, Chicago, Tokyo, Paris and Oslo. The idea behind the festivals is to celebrate the music of the respective countries, whether it's through talks and workshops or live performances and raves. There's always insights into the key musicians, whether legends or the new school pushing things forward. Put simply, the festivals are both educational and fulfilling for the party appetite.

The 10-day event in São Paulo entailed music, art, live performances and lectures. Our four-day visit meant we didn't experience the whole thing, but we did manage to catch Selvagem playing at Red Bull Studios, see a performance of Pedro Santos' classic album 'Krishnanda', which turns 50 this year, and rave at Zonas Limiares, an all-night party at industrial venue Fabriketa with the likes of Avalon Emerson, Lorenzo Senni, Or:la and Brazilian artists such as BADSISTA, Benjamin Sallum and Lorac Issum. We were also treated to a viewing of Inspire The Night: Brazil's LGBTQ Youth Finds Hope in Batekoo, a short documentary about the Afro-Brazilian Batekoo collective, which throws parties for the LGBTQ and black communities.

Below are five things we learned at Red Bull Music Festival São Paulo.

Batekoo is fighting for Brazil's black and LGBT communities

Spending time with the Batekoo crew was both harrowing and so inspiring. For context, Batekoo is an Afro-Brazilian collective throwing parties for the LGBTQ and black communities and other discriminated groups in Salvador, where it was founded, and São Paulo. Red Bull's Inspire The Night documentary revealed that a member of the LGBTQ community was murdered every 19 hours in Brazil, making it the most dangerous country in the world for the LGBTQ community. The election of President-elect Jair Bolsonaro - who has a history of making homophobic remarks - hasn't made it any easier. "We are more insecure with the election," said Batekoo co-founder Maurício Sacramento after we watched Inspire The Night at Red Bull Studios. "We're being more conscious and paying more attention on how we can be more safe."

The 20,000 people that partied with Batekoo during São Paulo Carnival proves the discriminated are feeling empowered. Juju 'Jujuzl' Andrade, a dancer for Batekoo, is testament to this. In the documentary, she explains how her family are fatphobic, something that led to her to years of depression. "I owe my life to Batekoo," she told me. "Before Batekoo, the parties I went to took me back to my depression and depressive thoughts. If I didn't find Batekoo, I would already be dead. It saved me from myself." No wonder she calls herself the "queen of Batekoo São Paulo." And rightly so. 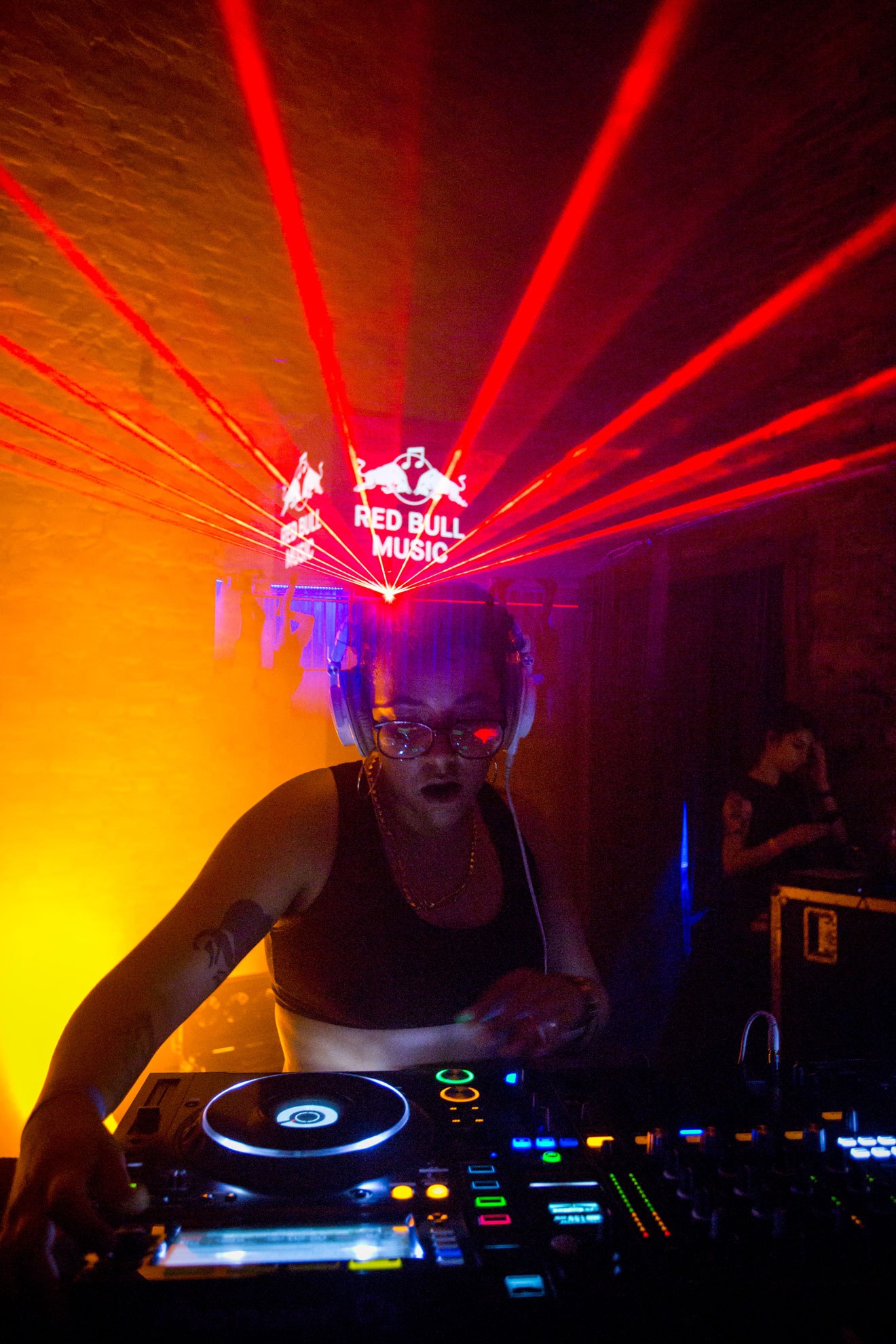 BADSISTA is our new favourite DJ

Coming away from a rave or a festival knowing you've discovered a new artist is one of the most satisfying things for a music lover. It's that excitement of knowing you're going to return home ready to jump into the SoundCloud archives and unearth a bunch of old mixes or scroll through Spotify to listen to every single track they've released. This is exactly what I did with São Paulo born-and-bred BADSISTA upon my return to London after catching her whip up a frenzy at Zonas Limiares. As we walked into the barn-like Pista 2 of Fabriketa, the DJ and producer's silhouette bounced behind the DJ booth, an interchanging light behind her going from golden yellow to blood red. The silhouette nodded among the smoke bellowing out from a smoke machine as she went from Floorplan's 'Baby, Baby' into her remix of Kelela's 'Better', a can of Stella being swigged between mixes. Underworld's 'Born Slippy' came later, as did the vocals of 'Lovefool' The Cardigans, quite surreal seeing as it came amid the banging, cut up rhythms of South American club music. Playing that is so important to her, as she told us later on. "I like to play tracks by people from Brazil and poor neighbourhoods throughout the country. If I don’t play them, who’s gonna play? I’m always supporting because people did that for me." She's definitely got a new fan in me. 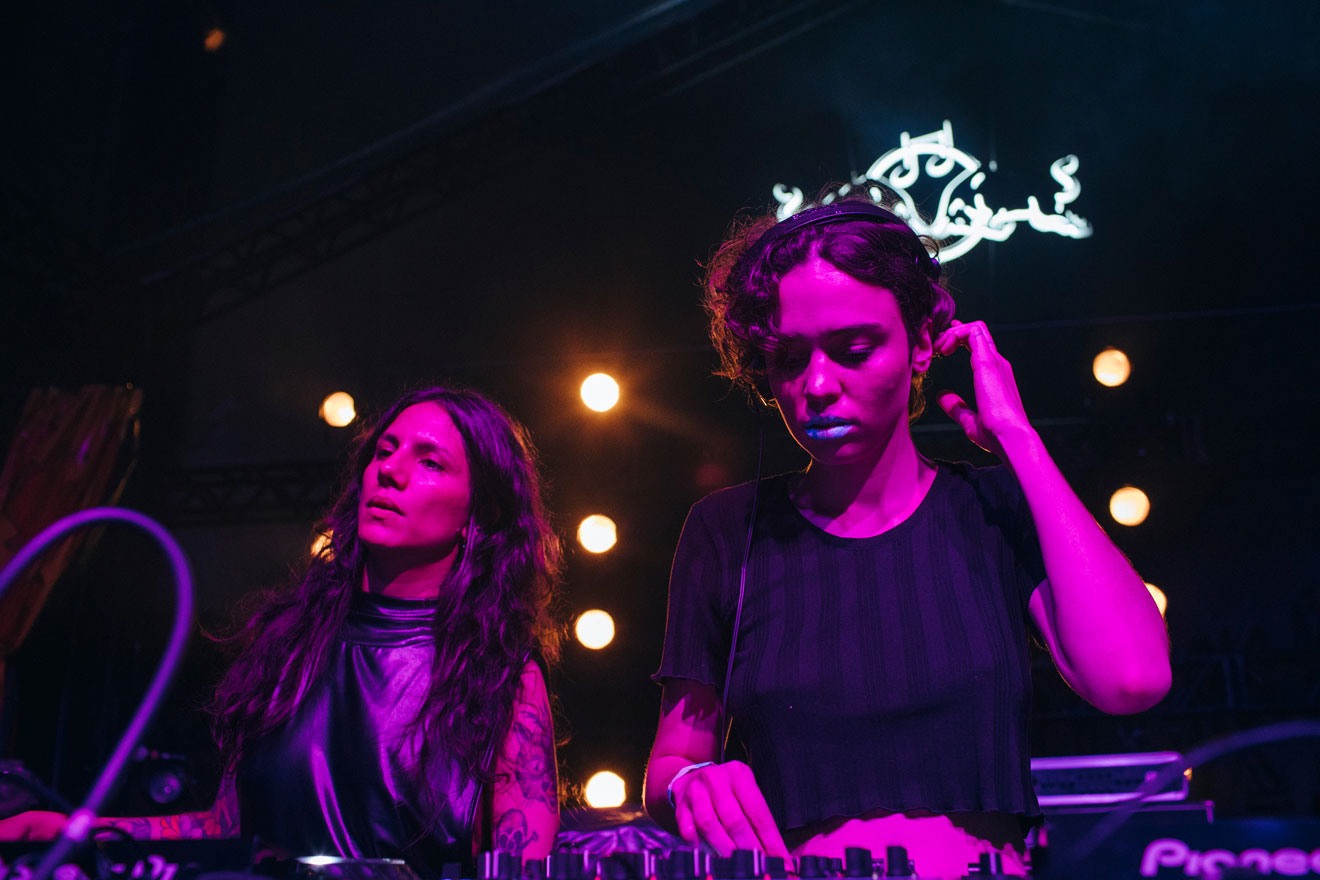 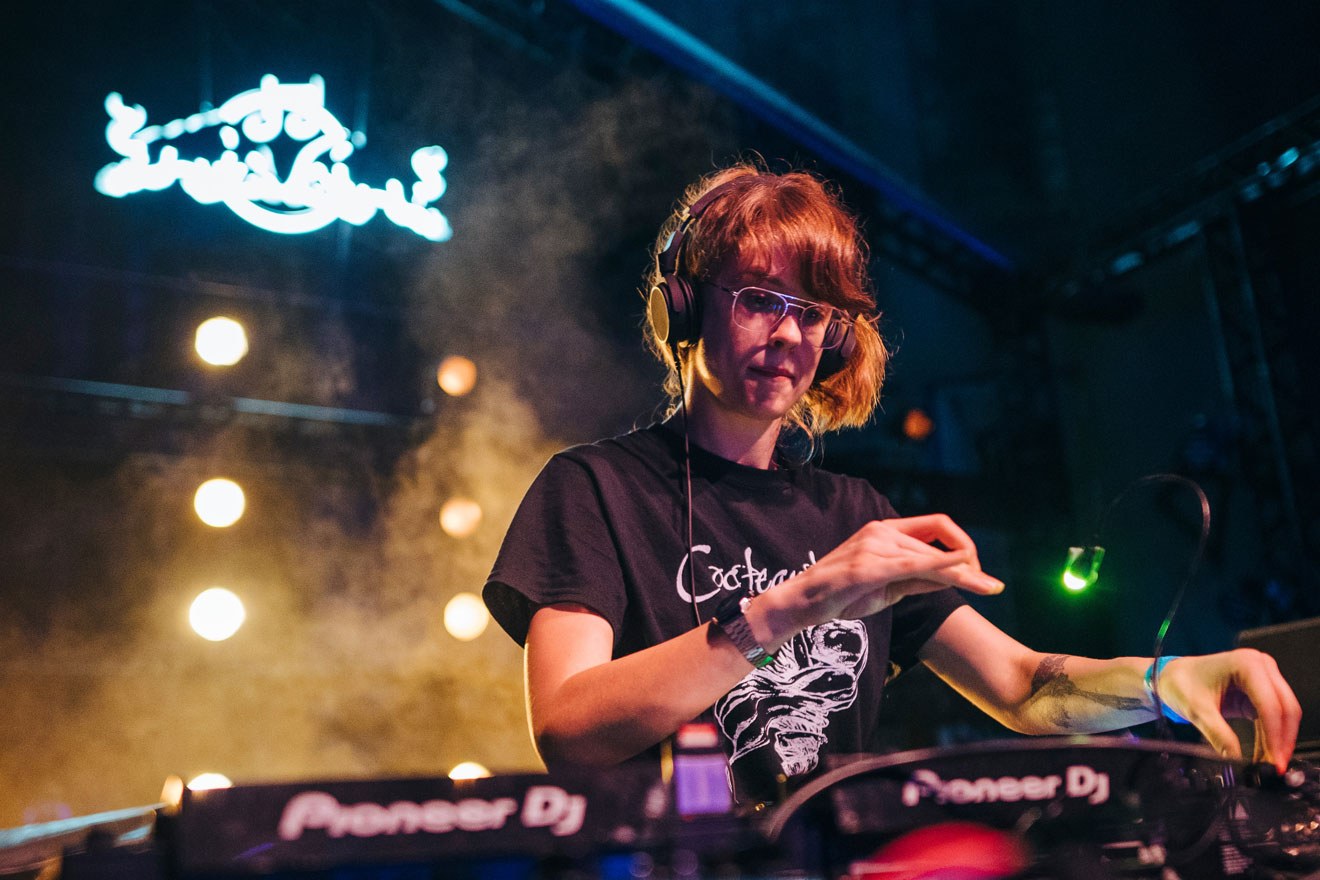 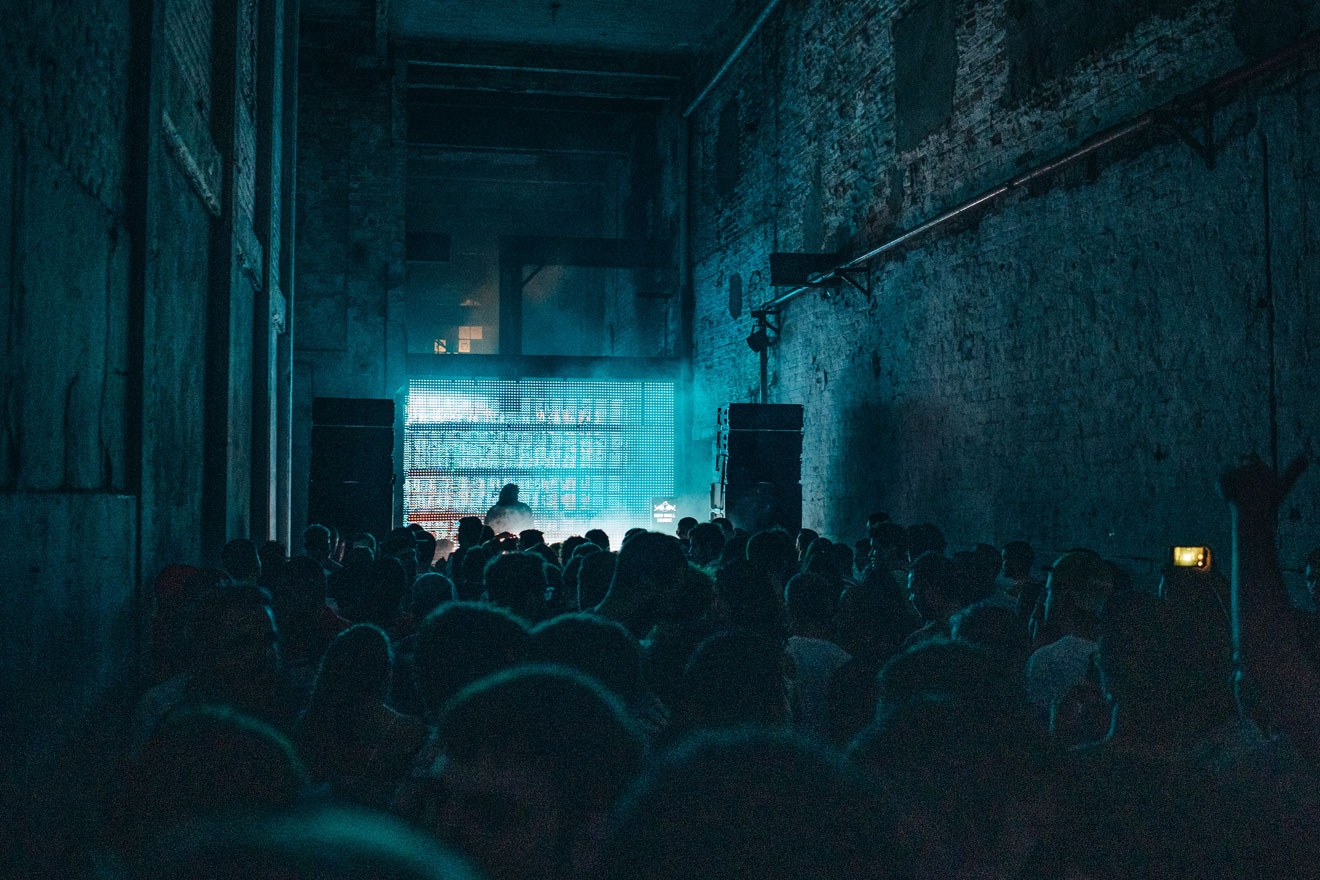 São Paulo ravers have it hard but they're pulling through

Imagine the time, money and effort spent to put a party on, only for the mayor's office to turn up with police in tow and shut it down before it's even started. That's exactly what's happening in São Paulo. The bigger clubs are generally OK, but these can be expensive in a city where the poverty rate is 20 per cent. The smaller, underground crews and parties charge less, but it's these that are hit the hardest by the authorities. "It’s hard because our governor is a guy who doesn’t like poor people, who doesn’t like parties, who doesn’t like us," BADSISTA told us. "People like me and LGBTQ people are always struggling because of the laws. We're afraid to throw parties in the street."

Amanda Mussi, who plays as Lorac Issum alongside Mamba Negra co-founder Cashu, also highlighted the problem of homophobia and misogyny in the bigger clubs. "Everyone got sick of the environment and the oppressive thing they do," Amanda said. "You have no freedom." Zonas Limiares was the complete opposite, though. Security were there, but they stood on the sidelines and let São Paulo's ravers - the über cool and trendy - dance as they wished, often on stage for plenty of time until security eventually, and politely, asked them to get down.

Benjamin Sallum, an 18-year-old DJ and producer who took part in Red Bull Music Academy in Berlin this year, said: "We’re passing through a hard moment right now but we always pass through. Most people that are coming through are the LGBTQ and poor people. They’ve got this struggle so I think them coming up is the most important thing in the scene." 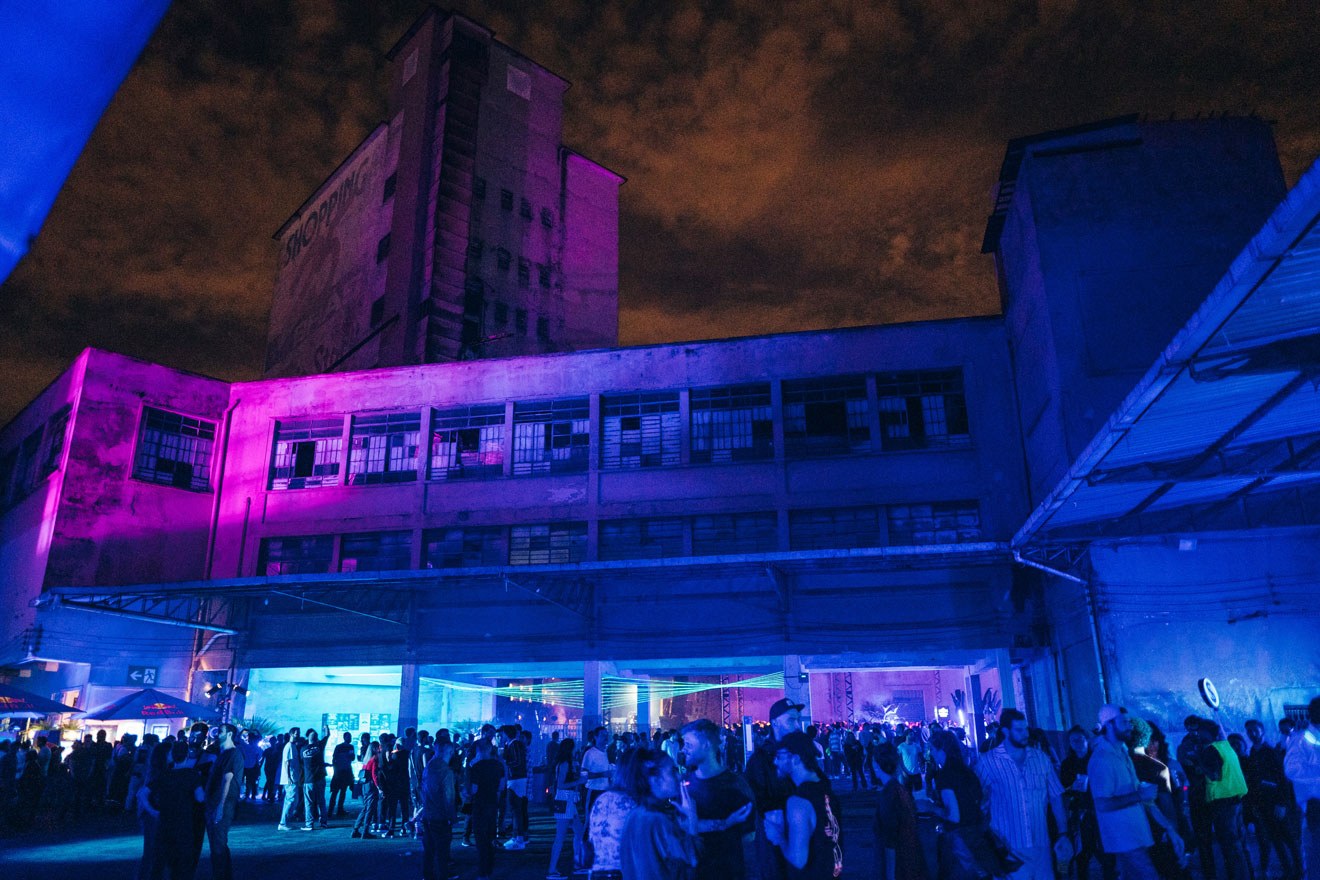 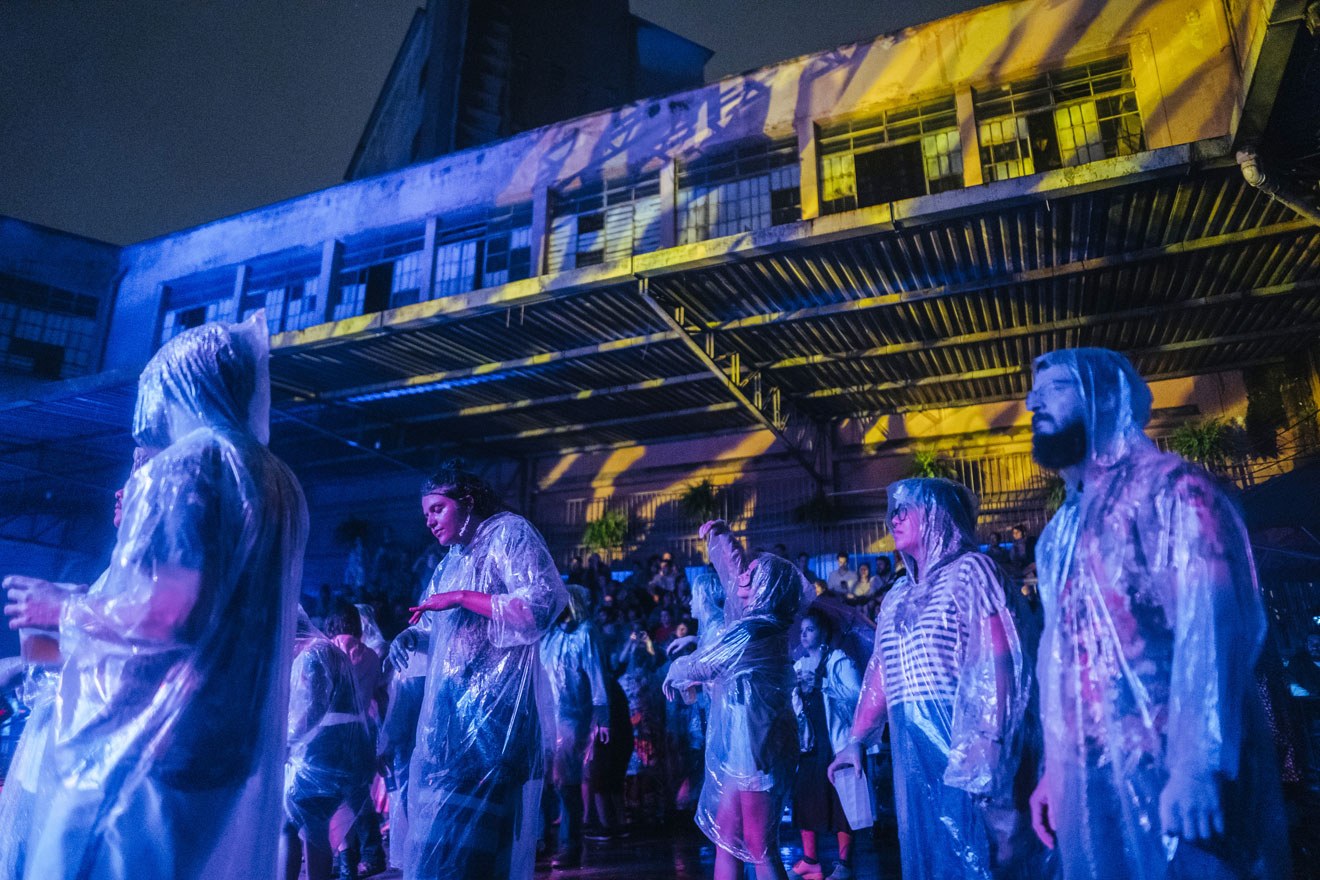 Abandoned buildings are integral for parties in the city

Fabriketa. Wow. Warehouses are obviously prime locations for partying and this vast industrial complex is one of the best I've seen. We headed there first for the reinterpretation of 'Krishnanda', a psychedelic jazz album by the late musician Pedro Santos. The stage - erected in a courtyard bordered by towering brick buildings - welcomed a 13-strong collective that had a cellist, a xylophonist, drummers, a tambourinist, bass guitarists and interchanging singers. Most punters took shelter from incessant rain in the bleacher-style seating, but the hardcore huddled in front of the stage for a dance. Come the end of the show, Fabriketa resembled a scene out of Blade Runner with Red Bull's red and blue neon lights shining on the puddles on the ground and the clear, waterproof ponchos worn by most in the venue.

For Zonas Limiares the venue looked completely different. Gone were the bleachers and the stage as it was split into three sections - Pista 1, Pista 2 and Pista 3. The sci-fi feel was still there, with red lasers lined down a tunnel into the courtyard and trippy visuals on show in Pista 3. Basically, the complex is a dystopian rave playground and perfect for the weighty techno and bass played on the night.

Cashu said venues like Fabriketa attract "a lot of people", which sometimes means clubs can be empty. "There were people from clubs who united with the mayor and they started sabotaging parties by sending the police," Amanda Mussi added. Just goes to show throwing parties in places like this are so important when the raving community has it so hard. 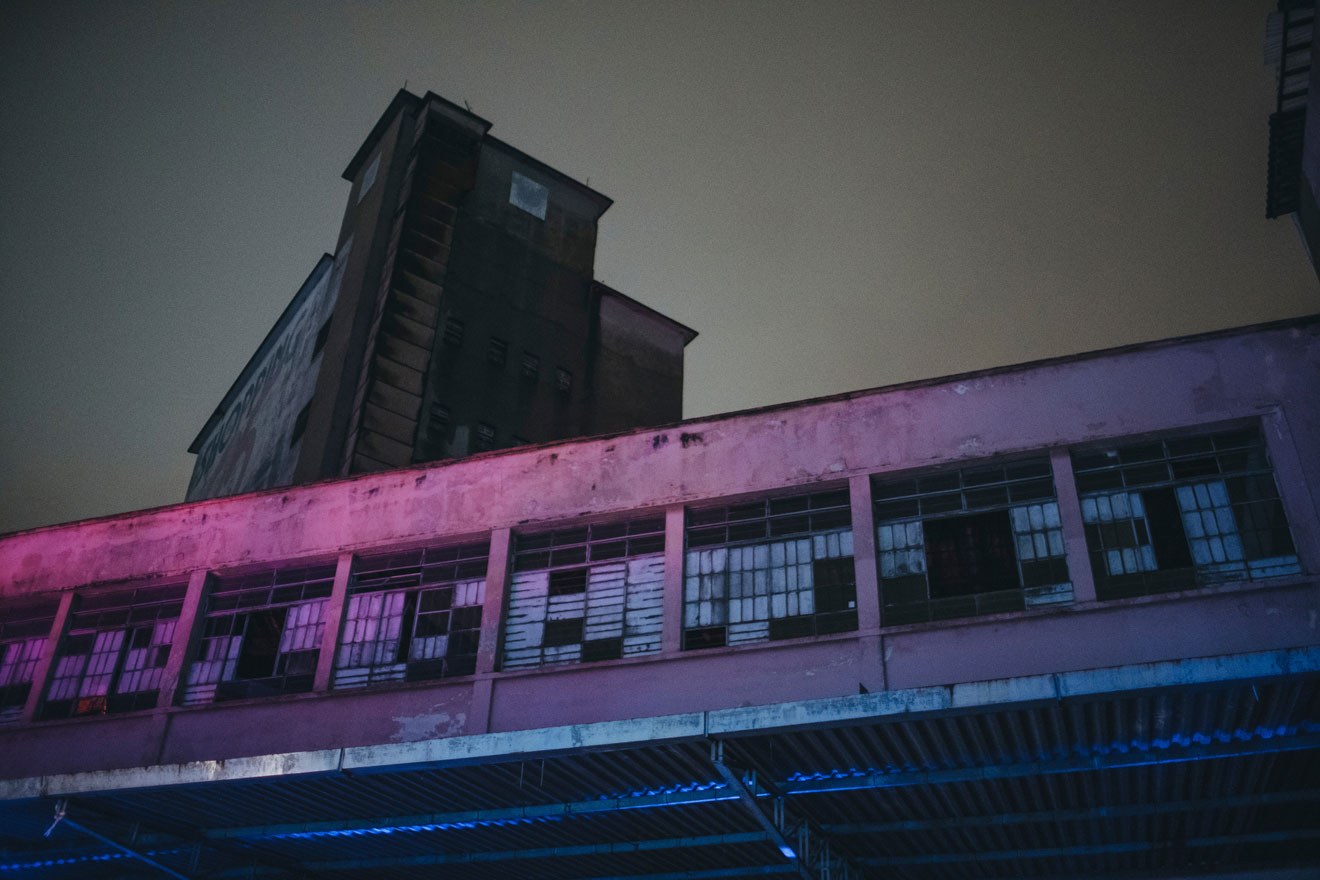 Listen to Lorenzo Senni's music through headphones and your head is sent into a spin. Experience a live set from the Italian producer and you sense you're about to take off. Lorenzo entered Pista 1 following Lorac Issum's techno-heavy set, announcing his arrival by draping his own flag at the back of the stage. Then came the bass. Intense, chest-vibrating bass as he played his 2016 track 'emotiva1234', a hypercolour trance deconstruction. Lorenzo was animated behind his machinery, pulling screwfaces and aggressively nodding as he twiddled with knobs and pressed buttons. A flying kick was his next move as the turbo-charged 'Win In The Flat World' entered his set. Complete and utter madness.