5 There really aren't enough 'dance bands' around in 2016

Sure, no one really wants to turn back the clock to punk funk and new rave and get the Klaxons to reform, but guitars and live drums do have a place in dance music, and for too long now it's been Hot Chip ploughing a lonely 4/4 furrow. This is especially obvious in festival season: a live band sprinkled among the DJs and producers lifts an electronic festival to new levels, especially one with LCD's back catalogue.

6 It provides rays of hope for other unlikely reunions

Not many of us saw LCD Soundsystem getting back together this quickly; they did make quite a big deal over breaking up after all. There was some hopeful excitement when Consequence Of Sound broke the reunion story in October, but the general response was disbelief, and the optimistic few were crushed as we all fell for the DFA label manager's aggressive denial that same day.

Yet here we are: LCD Soundsystem are back together, with shows confirmed and new material reportedly on the way, and now anything seems possible. Will we once again see David Byrne dancing with a lampshade during a performance of 'This Must Be The Place (Naïve Melody)' with Talking Heads? Could Mark Wahlberg pack in his Hollywood career to treat us to renditions of 'Good Vibrations' with The Funky Bunch? Can The Smiths save us from endless, tiring reunion rumours by actually just fucking doing it? All that doesn't seem quite so implausible now. 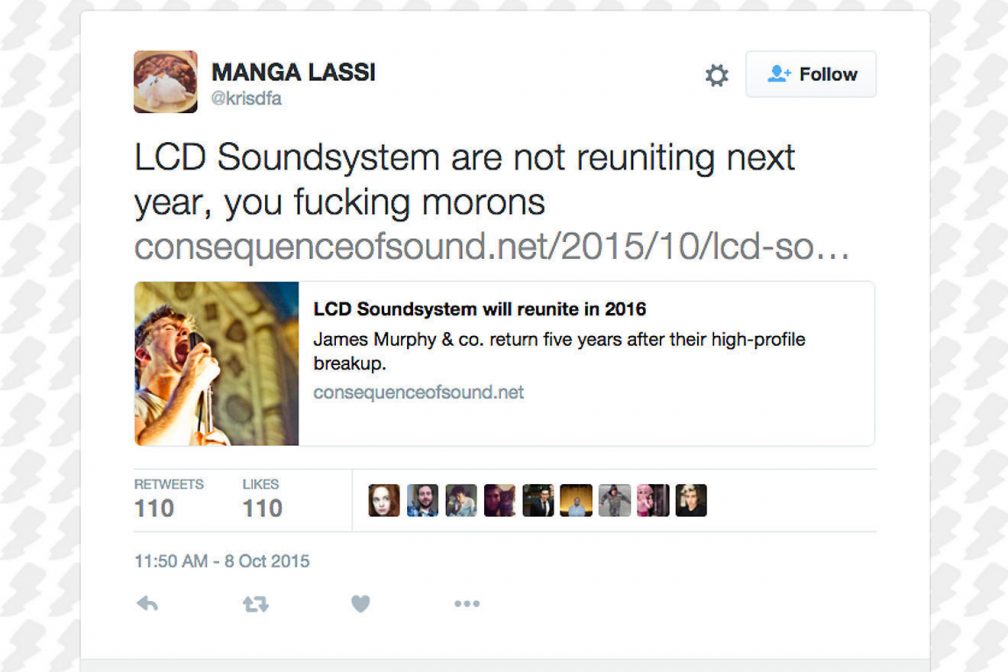 7 Their videos are epic

If the reformation means new music, that also means new music videos and LCD Soundsystem have always pushed things forward with their videos that are pieces of art in themselves. From the zany clown torture of 'Drunk Girls' to the DIY one-take (and now heavily copied) set-up for 'Tribulations'.

8 They wrote the ultimate paean to losing one's edge

Chances are, unless you possess the kind of encyclopaedic knowledge and irrepressible thirst for music of a Gilles Peterson or John Peel like figure, at some point you're not going to be as cool as you used to be. One minute you'll have an unnecessarily exhaustive knowledge of any label that's ever put out a decent 12", the next you'll be faced with someone 10 years younger than you going, "What, you've not heard that record?!" But don't worry, because it even happened to James fucking Murphy! LCD Soundsystem announced themselves to the world in 2002 with this defiant hymn to having one's edge blunted and made one of the decade's most important and startlingly brilliant records in the process.