Ketflix & Pills was targeted by hackers at the weekend, leading to its Instagram and Twitter accounts being deleted.

A hacker took control of the accounts in the early hours of the morning on Saturday, March 3, and proceeded to post pornographic images and attempt to sell account shout outs for $50.

Among the posts, a hacker also promoted his personal account and a hacking group he is involved in.

The Ketflix & Pills Instagram account has now been deleted, and the meme group have opened a new Instagram page with the username ketflixandpillsofficial. It has already amassed 71,000 followers.

While K&P is attempting to get its old account back, the group is launching a campaign to build the following level on the new account to the same levels.

On the new account, Ketflix & Pills wrote: “After being hacked on Friday night, we’re working round the clock to get all our followers back on this account and try our best to restore our old one... on Wednesday, we will begin posting the memes that we all know and love! Until then, any support you guys can give in telling your friends will be much appreciated x LONG LIVE THE SESH”. 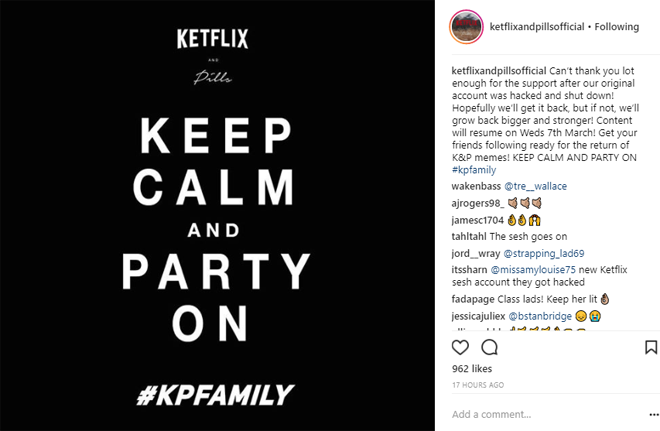 I already miss the Ketflix and pills insta

Just me that feels like ketflix and pills getting hacked is the end of an era?