It was four years ago when Maceo Plex disrupted the uniform tech-house of Amnesia’s closing party with Four Tet’s transcendent remix of ‘Opus’ by Eric Prydz. The moment became written into clubland folklore after a video appeared online of the dancefloor’s response. Muscular, vest-clad bodies perched on the ground preparing to jolt into action on the drop – a drop that never came. Instead the synths kept on building and the kick-drums failed to arrive. Gradually, the ravers stood up and shrugged, like sprinters giving up on waiting for an unloaded starting gun. Not the most fervent of reactions, then, for Four Tet’s music. But the man himself was drawn in by the clip (and the other ‘mad videos’ from the venue), and set his sights on performing at the superclub. Tonight, he has his chance. As a 2019 Ibiza season exclusive, his appearance marks a statement booking in more ways than one.

Amnesia has found it harder to break the mould. Aside from Together on Tuesdays, an ‘alternative Ibiza’ showcase of bass music, the club’s regular programming is all about linear beats. The big story of this season is Marco Carola and Music On’s departure to Pacha, but in terms of shaking up Amnesia’s calendar, the impact has been minimal, the world-conquering tech-house DJ-led residency gap plugged with more of the same in the shape of Luciano’s Vagabundos.

Read this next: How Marco Carola and Music On conquered Ibiza

By booking Four Tet to top the bill at Pyramid, it feels like Amnesia is testing the waters for introducing a new type of headliner to the San Rafael faithful. He falls slightly outside the usual remit with sets favouring UKG, dubstep and pop edits alongside house and techno, while still being a relatively low-risk pick as a massive draw capable of tempting new visitors to the club. 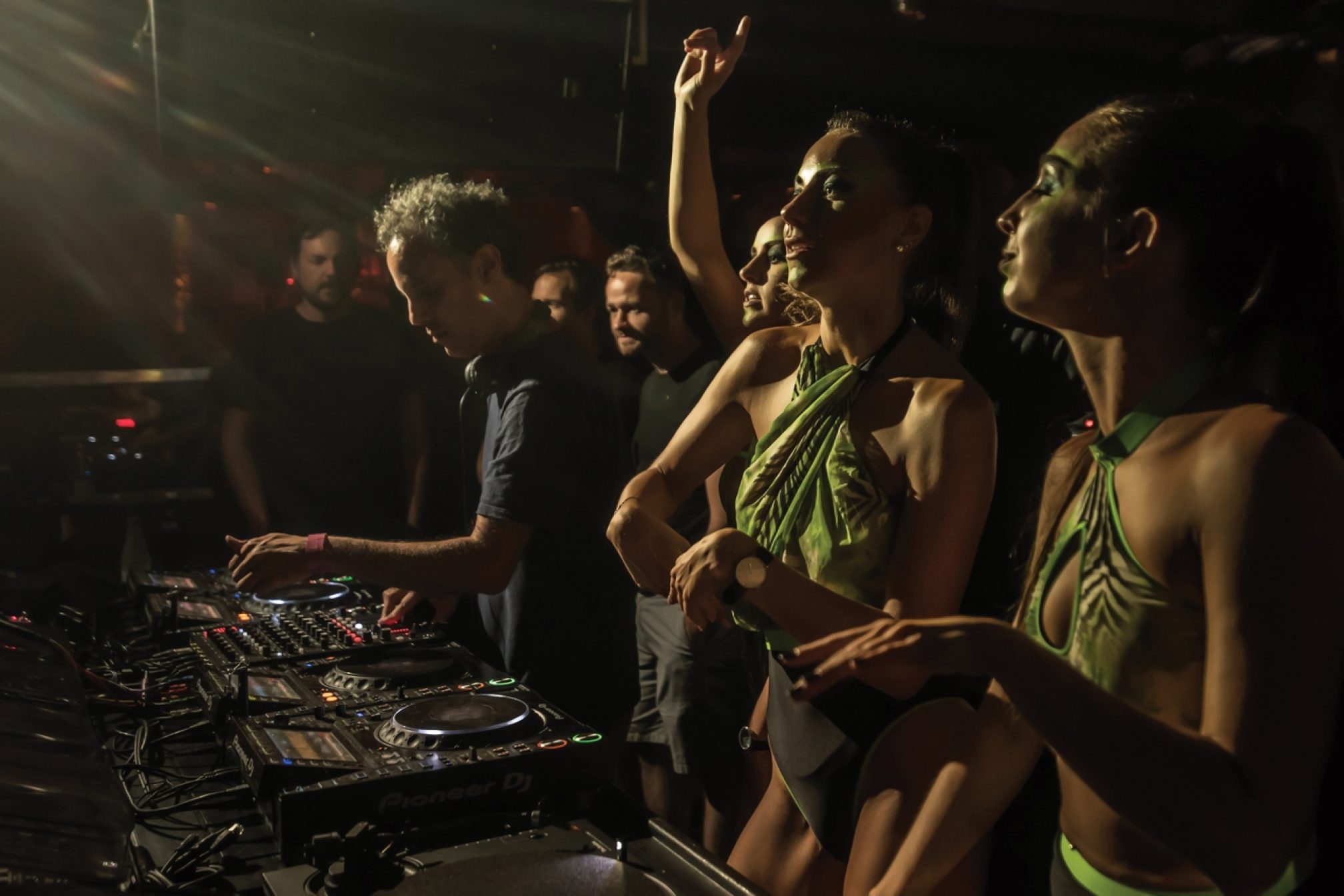 Amnesia’s Artistic Director/Promoter of Events and resident DJ Martin Vega, aka Mar-T, says the aim of the party is to be “organic: it’s not perfect, it’s alive, changes and adapts.” The vibrant greenery decorating the Terrace on the night mirrors this. Entering the room is like stepping into a rave in a rainforest. Ivy is draped like bunting across the ceiling and thick leaves hang from the walls, while brilliant green lasers cut through the room and illuminate podium dancers who make human pyramids above the centre of the dancefloor.

tINI hands over to Four Tet after finishing up a set of trippy grooves at 3:AM and immediately the club feels different. He opens with the smooth chimes and plucked strings of his 2017 album closer ‘Planet’, switching up the dancefloor’s mood from heads-down shuffling to wider-eyed appreciation of the tones. Amnesia installed a new KV2 soundsystem this summer, and the melodies sound rich and crisp in the vast room. “At KV2 we have developed revolutionary technologies that allow club and dance music to be presented in a way previously not experienced. The lowest distortion levels on the planet and the highest dynamics allow every nuance of a DJ performers mix to be delivered, absorbed, understood and enjoyed,” claims audio pioneer George Krampera, who designed the system.

The professional dancers descend from their platforms for a break as Four Tet gets underway and punters rush up to fill the space, soon pumping fists to the wiggy acid line of Armando’s ‘Don’t Take It’ and the earth-shattering bass wobs of Joy Orbison’s ‘Big Room Tech House DJ Tool – TIP!’. It’s a storming set, and while ‘Opus’ isn’t tested on the crowd, the dancefloor stays with Four Tet during curveballs such as a remix of Destiny’s Child ‘Lose My Breath’. Those who stay until his 5:AM finish are rewarded with his epic remix of Bicep’s ‘Opal’. Smoke machines take aim at the dancefloor, unifying the remaining mass of whistling and whooping dancers in a refreshingly icy mist.

Read this next: 15 killer tracks from Pyramid's mid-season show-stopper at Amnesia Ibiza

“I was very happy to be able to offer something different. Though sometimes it looks like Ibiza is not ready for more creativity in line-ups, we try to be creative, which can be financially risky,” says Mar-T. The idea of Four Tet not being a big name may sound absurd to some ears, but in the Ibiza microcosm he is far from established among the heavy-hitters. And by the close of his headline slot, there has been a noticeable crowd bleed away from the Terrace, while the Main Room, where propulsive techno is the order of the night, remains packed out and sweaty. Charlotte de Witte plays the same time slot as Four Tet and goes in hard and heavy from the off. The décor is far more sinister, with darkly dressed dancers moving as maniacally as Natalie Portman in Black Swan and heavy red searchlights cutting through the murk as the Belgian DJ unleashes Hell Driver’s ‘Extinction’. Len Faki takes over and immediately pounds the floor with beefy Berghain untz, pumping his rippling arms pneumatically as crowd members clamber onto speaker stacks to let loose. 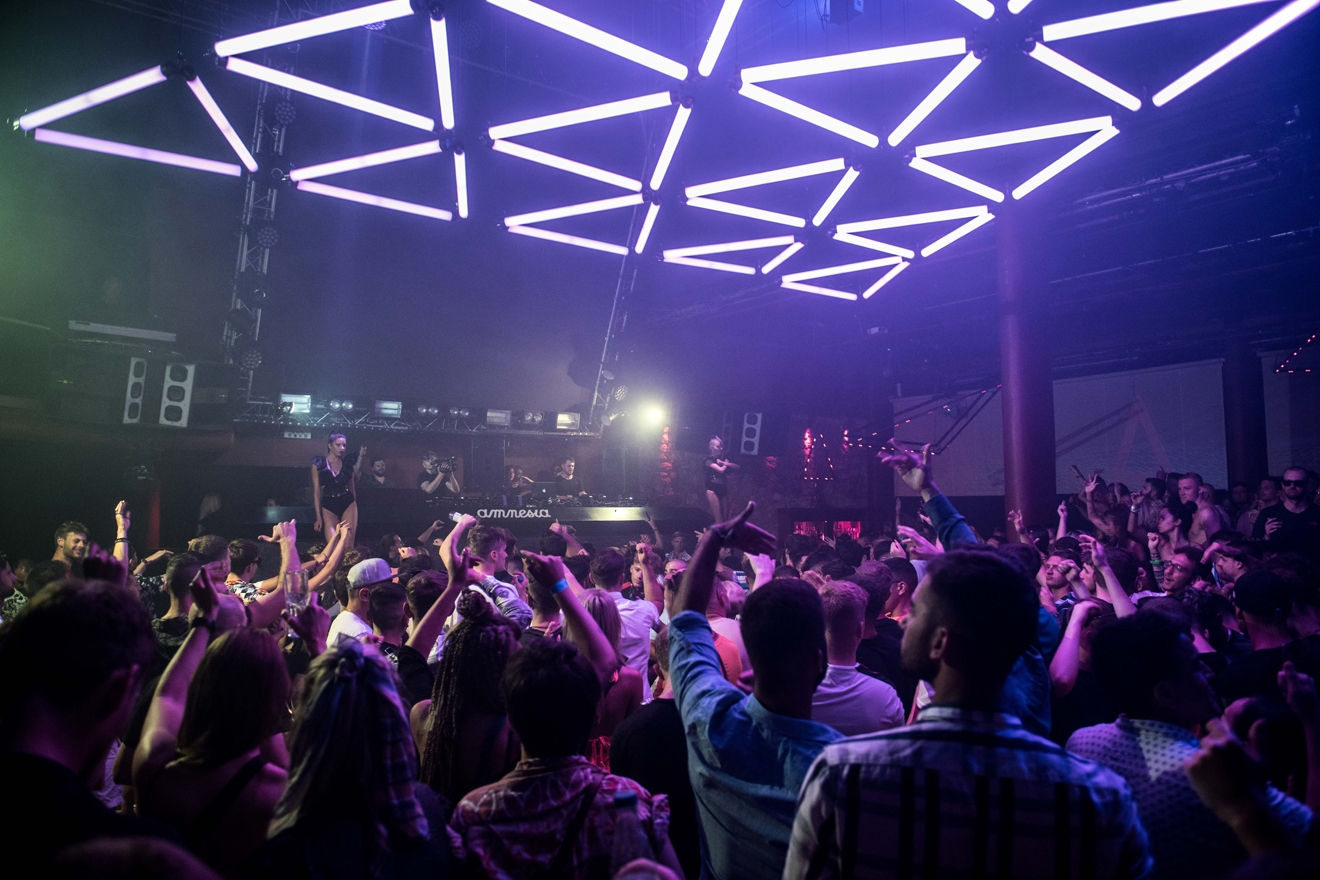 De Witte earned her first Ibiza residency at Pyramid’s debut season in 2018 and is now a favourite on the island, also playing at Resistance, Paradise and Cocoon in 2019. “Pyramid offers one of the strongest techno concepts on the island, I’m very proud to be a part of it,” she says. Amnesia is an unparalleled spot to enjoy the straighter side of dance music, and de Witte’s rise in prominence is testament to the club’s ability to taste-make in that realm.

Read this next: Dropping a male pseudonym has led Charlotte De Witte to find her true sound

Whether Amnesia can break into new territory is a work in progress. “My dream is for people to come to Pyramid trusting that there is going to be good electronic music and not caring so much about big names – a difficult dream,” says Mar-T. But the best things, in Ibiza and beyond, start with just that.