As the Saturday sun begins its decline behind the tip of Mont Fort, some 3000 ravers get down to the idyllic and infectious notes of Boo Williams. Crammed into the breathtaking 100 ft dome some 1500 ft above the Swiss town of Verbier, the third day of Polaris Festival slowly draws into a snowy hysteria.

Verbier is situated in Western Switzerland, a country divided by language. In the north you’ll find German, Italian in the south, French out west and Romansh along the east. Verbier is firmly in the French-speaking category, situated only 12km from the French-Swiss border. Yet thanks to its luxury and world-renowned ski conditions, it's become one of the most vibrant tourist destinations in the country. 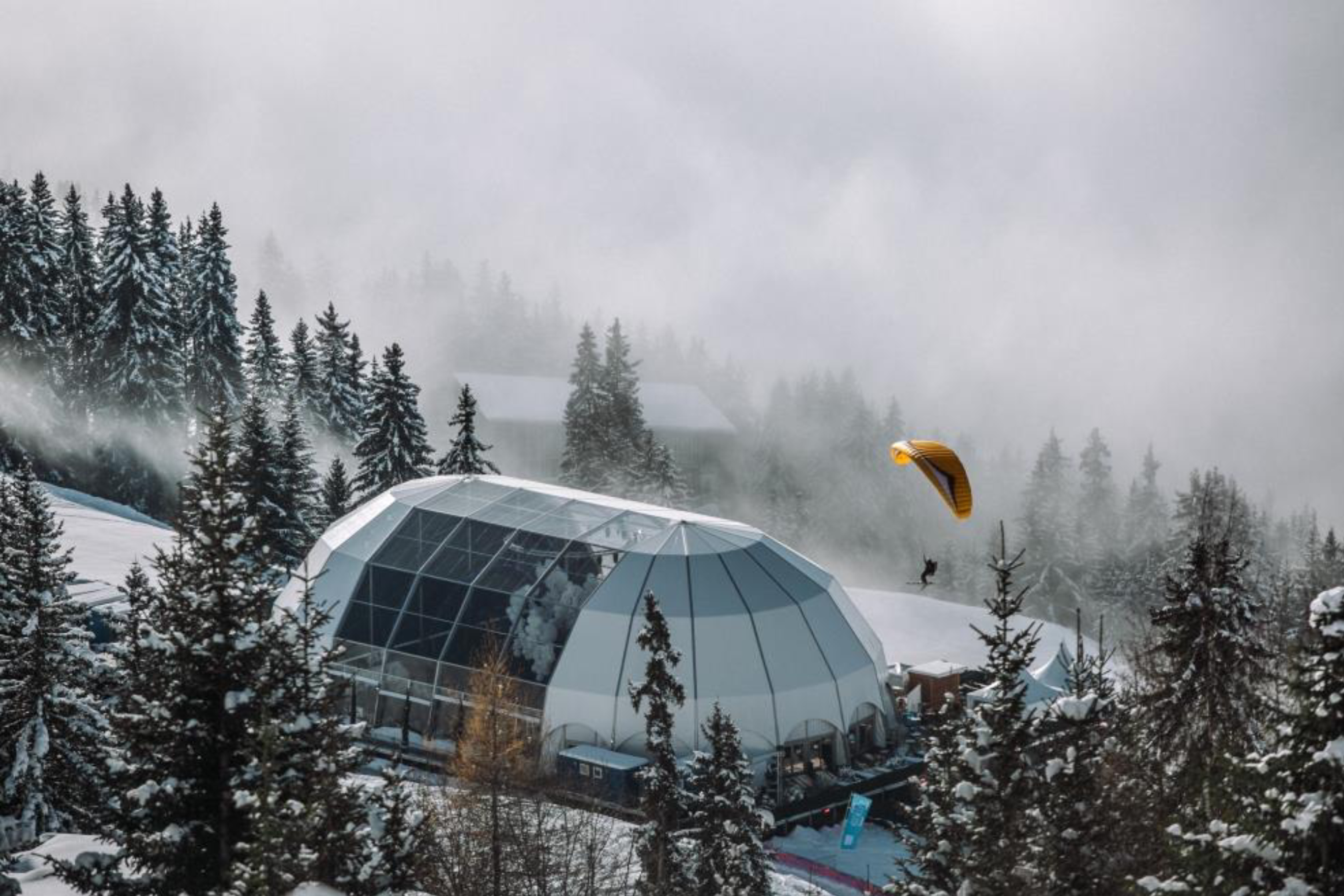 This was only the festival's second year in its new location, some 2,000ft above sea level in a large 100ft dome on the south side of a snowy mountain in the heart of the Val de Bagnes. Looking out from the dome you’ll see Verbier to the East and the local village of Le Chabe directly ahead, all of which is dwarfed by Mont Gelé, a mountain so big skiing is prohibited. It was a scene worthy of any festival or event, but for one weekend a year, it’s the home of some of the world’s best dance and electronic music on offer.

Since its birth in 2015, Polaris has showcased a variety of genres from within the dance and electronic music scene. They’ve featured the established, the upcoming and royalty of the industry, yet 2019 was arguably their biggest to-date. This year alone featured a swathe of heavy-hitting artists like Honey Dijon, Seth Troxler, Omar-S and Carl Craig, as well as innovators like Bambounou, Joe Claussell and Floating Points.

Day one was hosted by Boiler Room Switzerland and saw Mirko Loko - one of the co-founders of Polaris - send joy across a vibrant and expectant crowd in front of the BR cameras. Followed by Anthony Naples and Antal - both of whom were outstanding - the stage was set for electronic royalty in the form of Omar-S. The Detroit-born DJ was given a rapturous response as he took to the decks, welcoming in midnight and day two with ‘The Shit Baby’ alongside thumping bass and some typically Omar-S-esque twists. 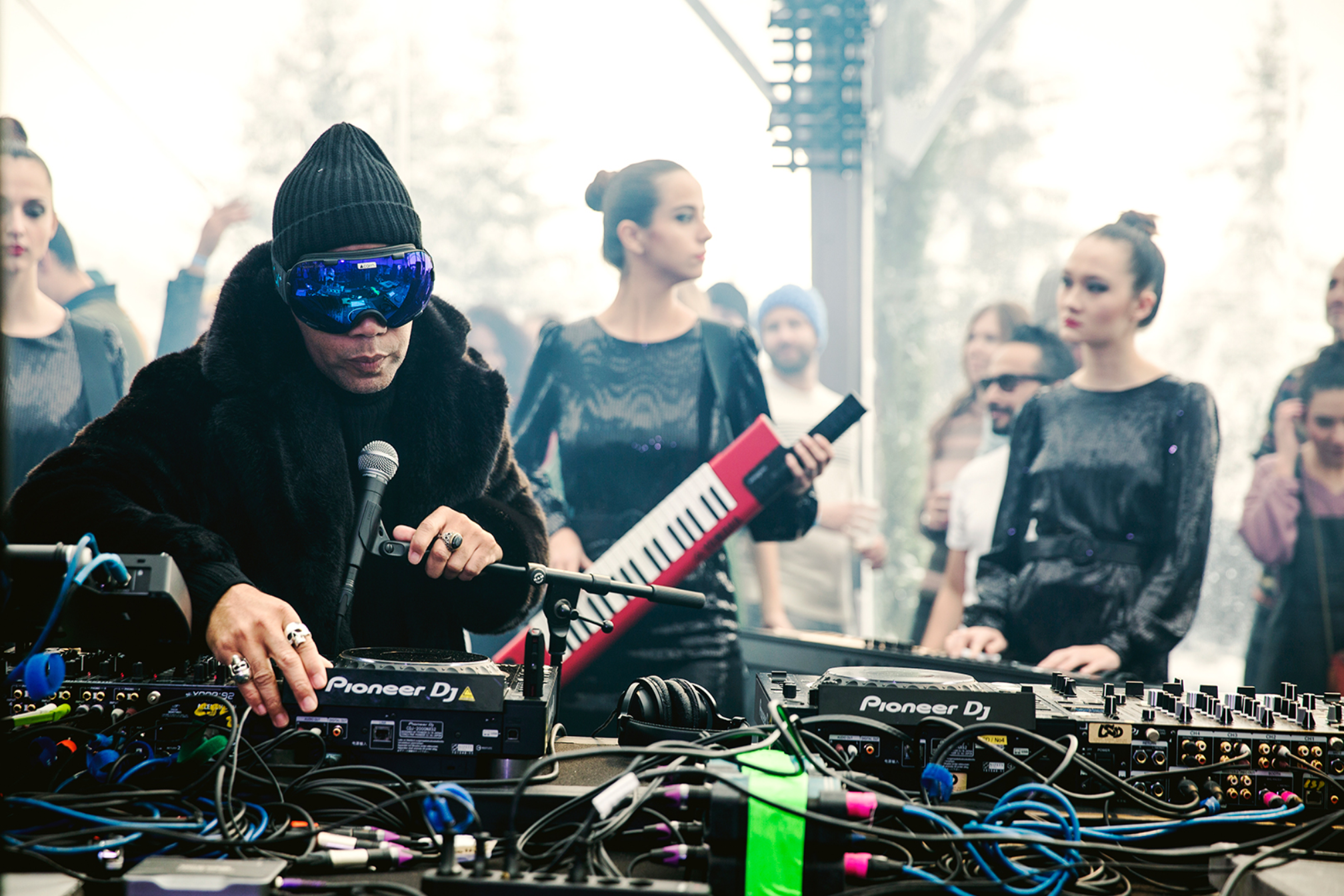 Boiler Room again started day two of the festival, with Princess P. and Waajeed, before Carl Craig stunned the crowd as he entered with some Detroit-style mind games. Harking vibes of Robert Palmer’s iconic ‘Addicted to Love’ video, Craig was joined by a host of dancers who held synthesisers and swayed nonchalantly side-to-side to the deep beats and sporadic shouting that Craig had put on.

Main stage was opened by Geneva’s own Audrey Danza, before the bigger hitters were ready to grace what was to be the festival’s stand-out night. A Floating Points set sent shockwaves through the festival as the Friday sun began to set - which prompted a feverish reaction from the crowd - before Joe Claussell took to the decks to deliver an outstanding performance and set the tone of the evening. The New Yorker played renditions of ‘Je Ka Jo’ and ‘Rhythm’ and even mixed in Bob Marley’s ‘Is This Love’ which created a special atmosphere across the dome. Seth Troxler graced the stage at midnight with an expectant crowd, yet the American wasn’t phased and delivered a closing mix worthy of any stage.

Read this next: The top 15 breakthrough DJs of the year 2019

Boo Williams, Lea Lisa and Glenn Underground kept the vibe on-point as a sunny day three came, with the beauty of Val de Bagnes especially prevalent. Keeping the dance floor rammed throughout the afternoon and early evening, the likes of Wajeeed, Carl Craig, Mirko Loko and Carista were a part of a team that delivered 12 hours of non-stop, invigorating electronic sounds. The stand-out performer of the Saturday was French DJ Jeremy Guindo, better known as Bambounou. Adding signature touches to his selections, the Parisian effortlessly experimented with eclecticism and beats to engage the crowd in its entirety. 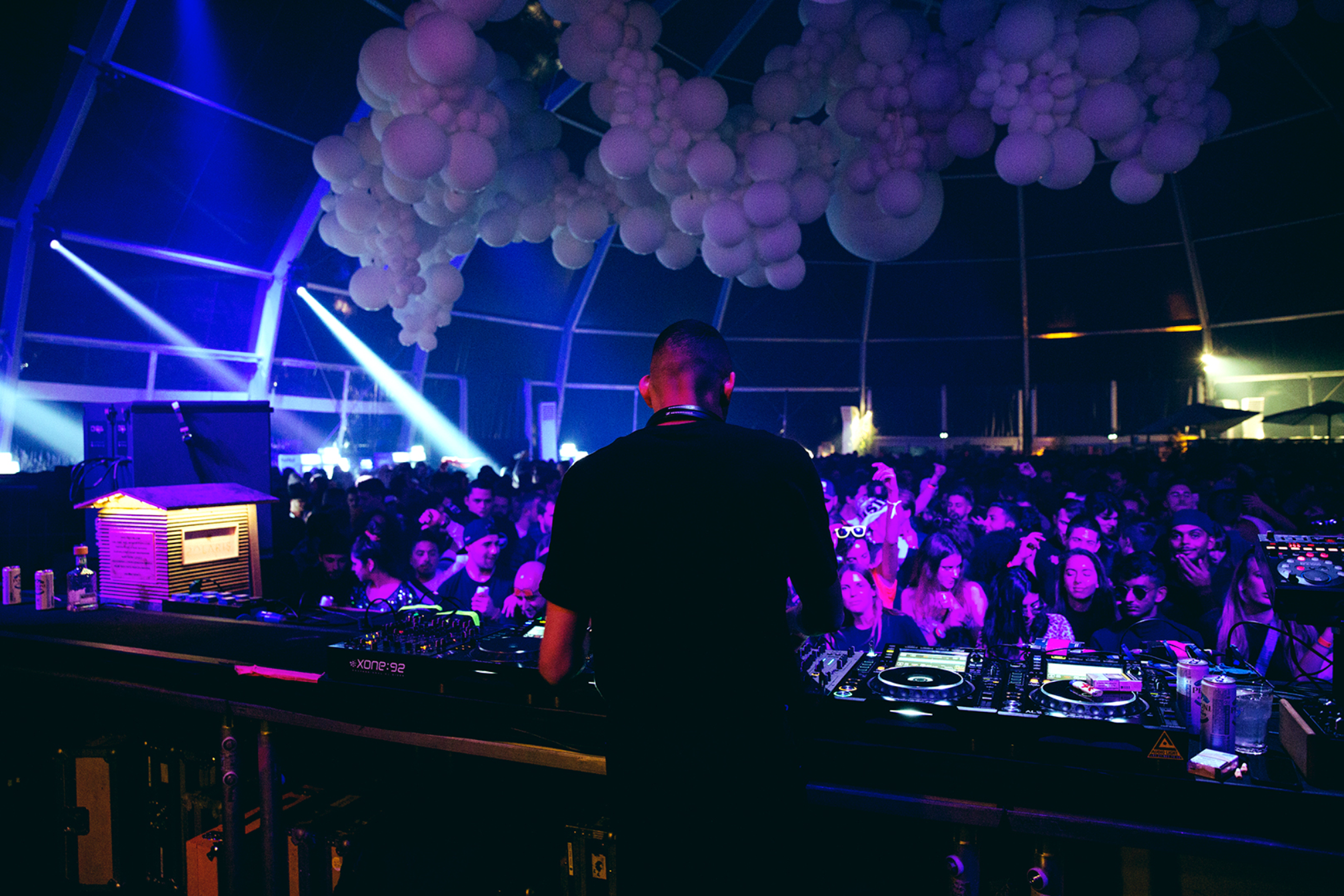 Sunday is traditionally a day of celebration at Polaris. It's about honouring the founders, their love for Detroit and Chiacgo vibes, and mixing it with the more new wave DJs of the future. It is though, also a day (or at least an afternoon) of recovery. Ravers who were topless and rapturous the night before were now in a more subdued mood as Palms Trax took to the stage and prepared to deliver 4 hours of disco-entranced, hair-raising vibes.

Ten minutes in and it was safe to say that the lips of every raver in attendance were certainly whet as the dome began to bounce. A man with jet black hair, dark sunglasses, wearing a double-denim combo who was quietly sipping a bottle of water five minutes beforehand had suddenly replaced his jacket for a slim, white tank top and was fist-pumping the fresh mountain air to the Palms Trax beats. Next to him a young French couple donning matching all-in-one turquoise ski suits begin shimmying against each other, all in the name of dance. The final day was about to deliver (and was certainly not about recovery).

Kerri Chandler and Jayda G continued the vibes throughout the day, before the much-awaited Honey Dijon took to the stage as the final main stage act. The American dived straight in the deep end as she dropped the sound of her 2017 hit ‘Thunda’ before ‘State of Confusion’ sent the crowd into ecstasy. 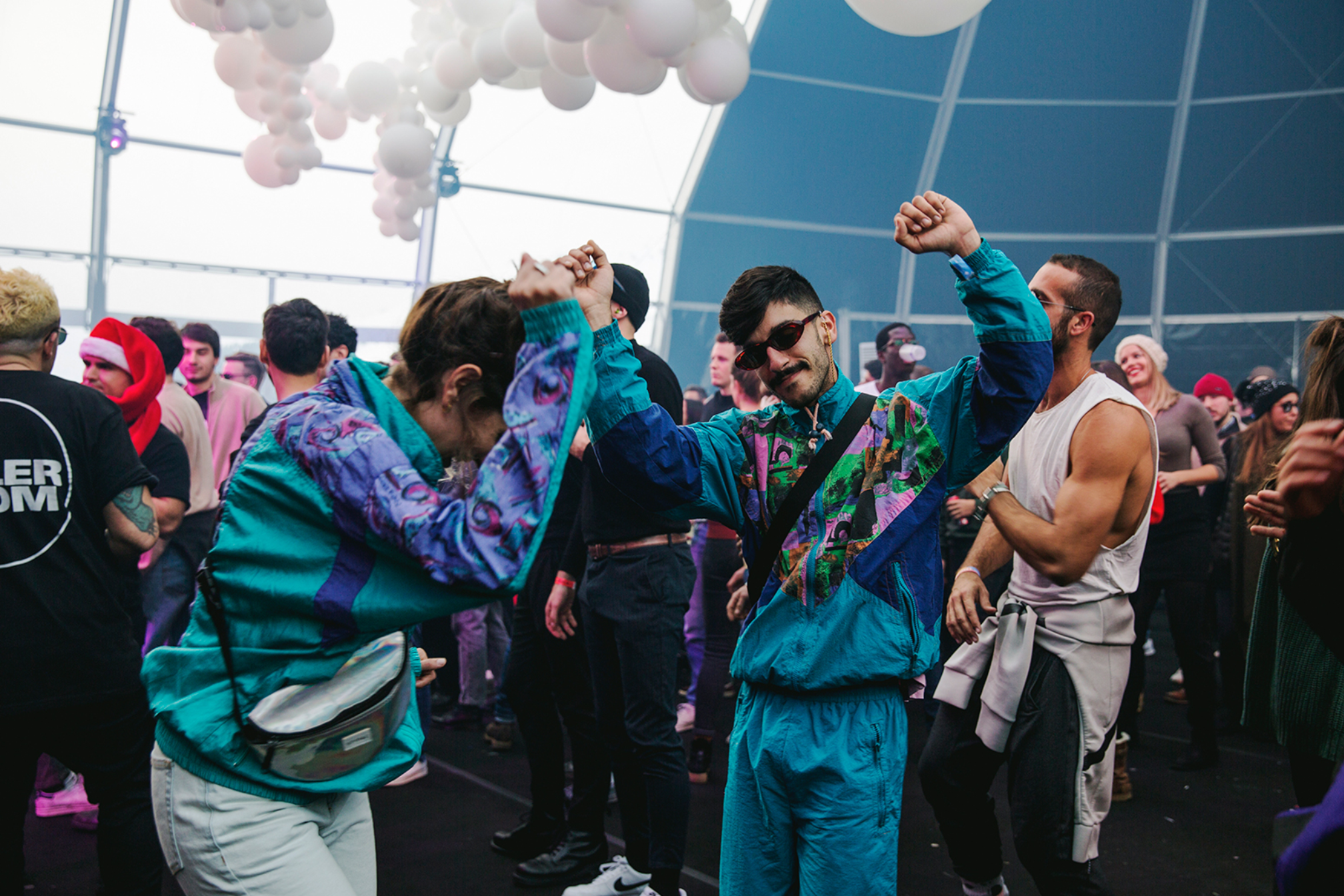 At Polaris you learn to be open to what is on offer. It’s stimulating, exciting, it takes you to another place. You forget your worries and your real life, and for one weekend it’s just you, the music and the outdoors. And if this isn’t something you’re looking for from a festival, then you’re doing it all wrong.

Although Switzerland may be a nation divided by language and lifestyle, it’s refreshing to see that no matter what their differences and backgrounds, Polaris can bring everyone together.