A giant spaceship has crash-landed in an abandoned Czech military airfield. Eighty metres long and 20 metres high, its construction defies our understanding of aerodynamics. Its lasers and beams surpass our knowledge of light-speed. Its reflective textures radiate unlike any manmade material. No one knows where it’s from or how it got here; the airfield has been cordoned off from the rest of the known world. Its inhabitants are now under martial law, enforced by some of the biggest d’n’b DJs imaginable. Welcome to Let It Roll festival.

Five hours have passed since the ship first crash-landed. Friction, Wilkinson, Andy C and Netsky have all applied their own sonic law enforcement. There’s no other event on this scale dedicated to drum’n’bass, and the young, international junglist crowd bray at every sense-blurring double drop, VIP and dubplate. But now things look set to get serious, as three dark figures hooded in LED-rimmed shrouds take to the ship’s viewing platform with an even darker, sharper and more complex message.

A contrast to the rolling 170bpm consistency that’s gone before, these men communicate at a variety of tempos with a unique musical vocabulary and visuals unlike any of the previous acts. Their arrival is heralded by the organ-blasting ‘Anomaly’, one of d’n’b’s most-played tunes this season.

Before you can say “take me to your leader”, switches are flipped again. The sci-fi salvo of ‘Collider’ causes 25,000 fans to melt into an en-mass goosebump, before a brutish 13bpm breakbeat groove shifts us all five feet forward. ‘The Entangled’ follows, a spiked-out cathedral of a composition that, while d’n’b is its DNA, would sit just as comfortably on the palates of fans of Modeselektor or Justice.

Just like Let It Roll’s epic main stage and its surrounding high-production stages, everything about this entire performance is another level. Leaders? Both on this alien spaceship and the more abstract idea of a bass music field, Noisia are the only real leaders right now.

“It’s the way we’ve set up our business. If we have an idea, we can go ahead and do it,” smiles shaven-headed 32-year-old Nik Roos, 12 hours later in the sunny garden of a five star hotel. No longer in his dark Jedi-style robes, he’s kicking back in vest and shorts, looking more like a holidaymaker than a spaceship captain. He’s flanked by long-haired Thijs de Vlieger (34), a tall, sincere man who boasts a constant furrowed brow and sharp wit. Martijn van Sonderen (32) is absent, having departed for a DJ set at another festival, leaving Nik and Thijs to host their ‘Noisia Invites’ stage at Let It Roll later that night.

“This whole show began as us sitting in a room and me saying ‘hey, let’s try making hoods with visuals and all this complex stuff’. Right before the show I was thinking ‘Jesus, this was a pretty fucking random idea’. Now we’re standing here, I hope it all works!’”

The ‘Outer Edges’ show is the grandest Noisia performance to date. A complicated, unique concept of real-time-triggered visuals and Ableton-performed beats, it’s a spectacular showcase of their own material. Some of it is plundered from their now 13-year old repertoire, but most is taken from their boundary-busting, brain-burning second album ‘Outer Edges’. In Thijs’s words, they’ve “waited for so long to do something on this scale”.

A web of networks, relays, MIDI triggers, custom graphics and a bespoke-configured modular set-up, it’s an ambitious performance – just like everything else they’ve pulled off since forming in 2002. 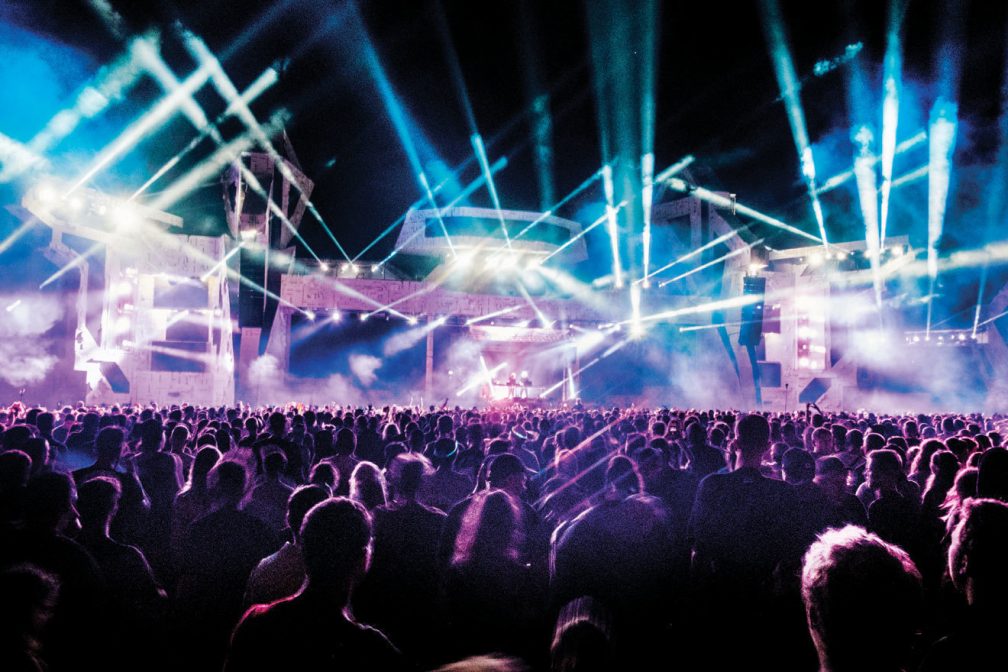