The beauty of Moogfest is that it isn't for everyone, and that's okay - Scene reports - Mixmag
Home Latest News Menu

Everyone is sitting when I walk into The Armory, located in downtown Durham. This would wind up being a theme throughout the week -- sitting -- which is not a thing one normally expects during festival performances. It's my first night at Moogfest and I'm here to see Suzanne Ciani, a.k.a. the "diva of electronic music" perform a live score to 1920 flick The Cabinet of Dr. Caligari. Ciani stands on stage with a swath of Moog gear (including a Sub 37) accompanied by various musicians including a singer and electric cellist. The movie projects overhead while synth wobbles crescendo out of the speakers and just as I begin to get comfy on the floor my heart thumps when a knife flashes on-screen, accompanied by a blaring sawtooth wave. Enraptured by synths playing along to a German silent horror film is admittedly a peculiar way to start a festival, but then again, this is Moogfest.

The fest was almost a bust, due to irreconcilable differences that arose between Moog and the festival’s previous production company. Luckily, UG Strategies, a multi-platform entertainment marketing firm, stepped in as a new partner, managing to pull the festival together in just three months. Marketing admittedly took a hit, and the lineup’s headliners, although oozing with talent like Jon Hopkins, KRS-One, Mouse on Mars and Kelela, didn’t pack as much of a wow factor as previous years. This all resulted in a smaller, more left-field experience, with around 6,000 people spread throughout scattered locations in downtown Durham.

Moogfest is less like a traditional “festival” and more like a conference with wild, experimental after parties. The people who come are as interested at the technical side of the gear being used as they are in the musicians themselves. There’s a marketplace, the opportunity to build an actual Moog and while traditional performances exist, the focus shares room with experiences like “durationals” (four-hour improvisational and experimental performances), sleep concerts and sound baths. 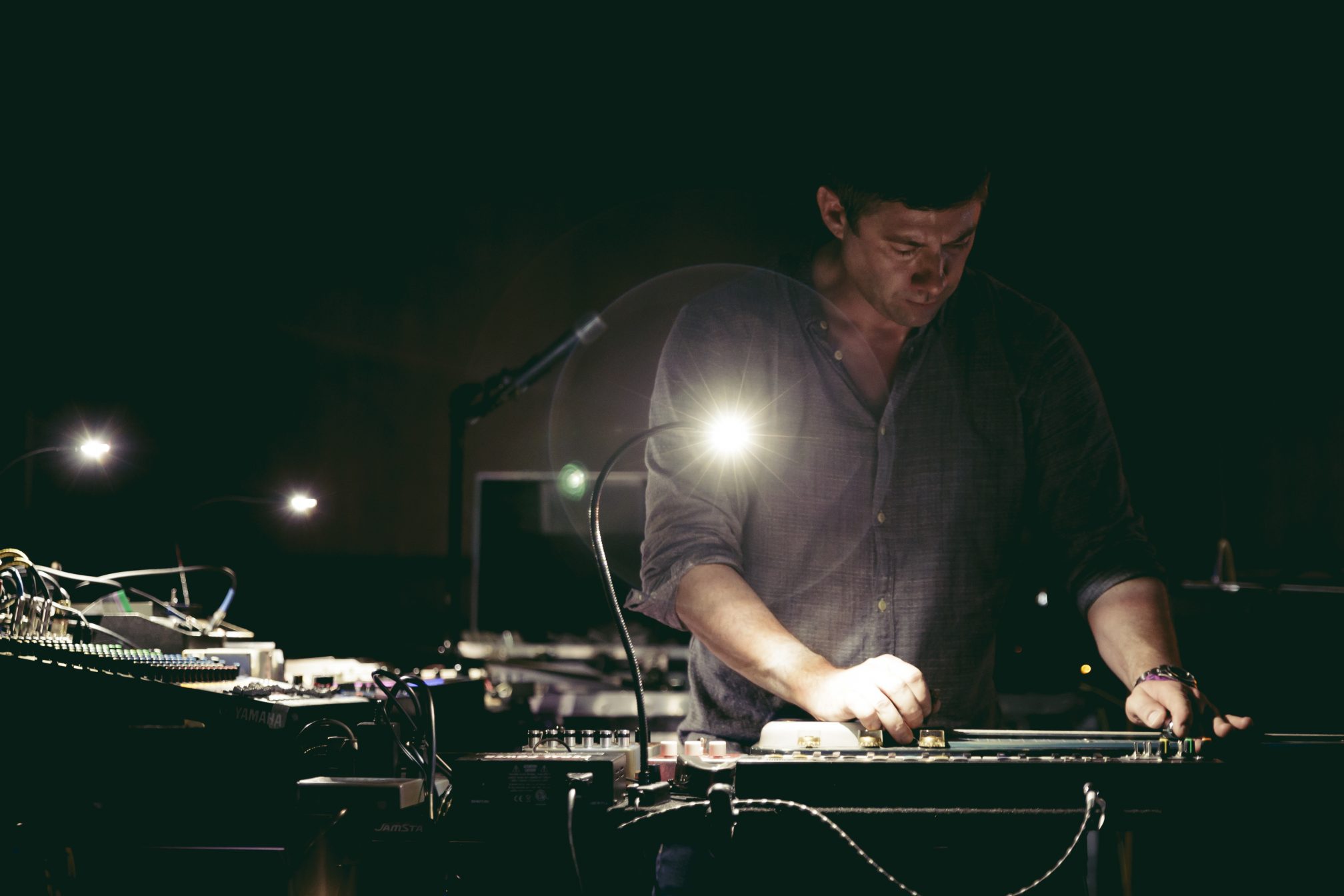 Even the aforementioned headlining acts sat outside traditional booking boundaries, especially in contrast to previous years (think: Grimes, Odesza, Blood Orange, and Flying Lotus). Add to this quirkiness the fact that Durham’s a small town without a wealth of proper music venues, and you begin to grasp the uniqueness of Moogfest. Many locations for events were ad-hoc creations for the week – there was an actual church, for example, and a formal theatre with bolted-in velour seats.

Though its roots are in music, the festival draws on all disciplines, from panels to speeches to art installations and even interactive workshops, all meant to spark conversation and lend a mindful layer to the role that music and tech have in shaping social consciousness.

To that end, Moogfest can often take on a sociopolitical theme and this year’s iteration specifically addressed the topic of gender inclusion, with keynote speaker Chelsea Manning, and performers like Jenny Hval, Suzanne Ciani, and members of DJ collective Discwoman. Not all were on board with this direction – last December Chairlift band member Caroline Polachek removed herself from Moogfest’s lineup, saying she was “furious to be (without approval) on an all-female & non-gender-binary announcement list for Moogfest. Gender is not a genre. I don’t need a sympathy pedestal, esp from a male curator.”

How to address gender disparity in various electronic fields has certainly been a vocal and contentious topic over the past year. Although Moogfest’s answer was reflected in musical performances, even more interesting is how it was tackled in panels and workshops. Umfang from Discwoman led a session on the basics of DJing with vinyl, while Duke University graduate student Ashley Williams gave a presentation on developing new tools to record the surface of the brain. 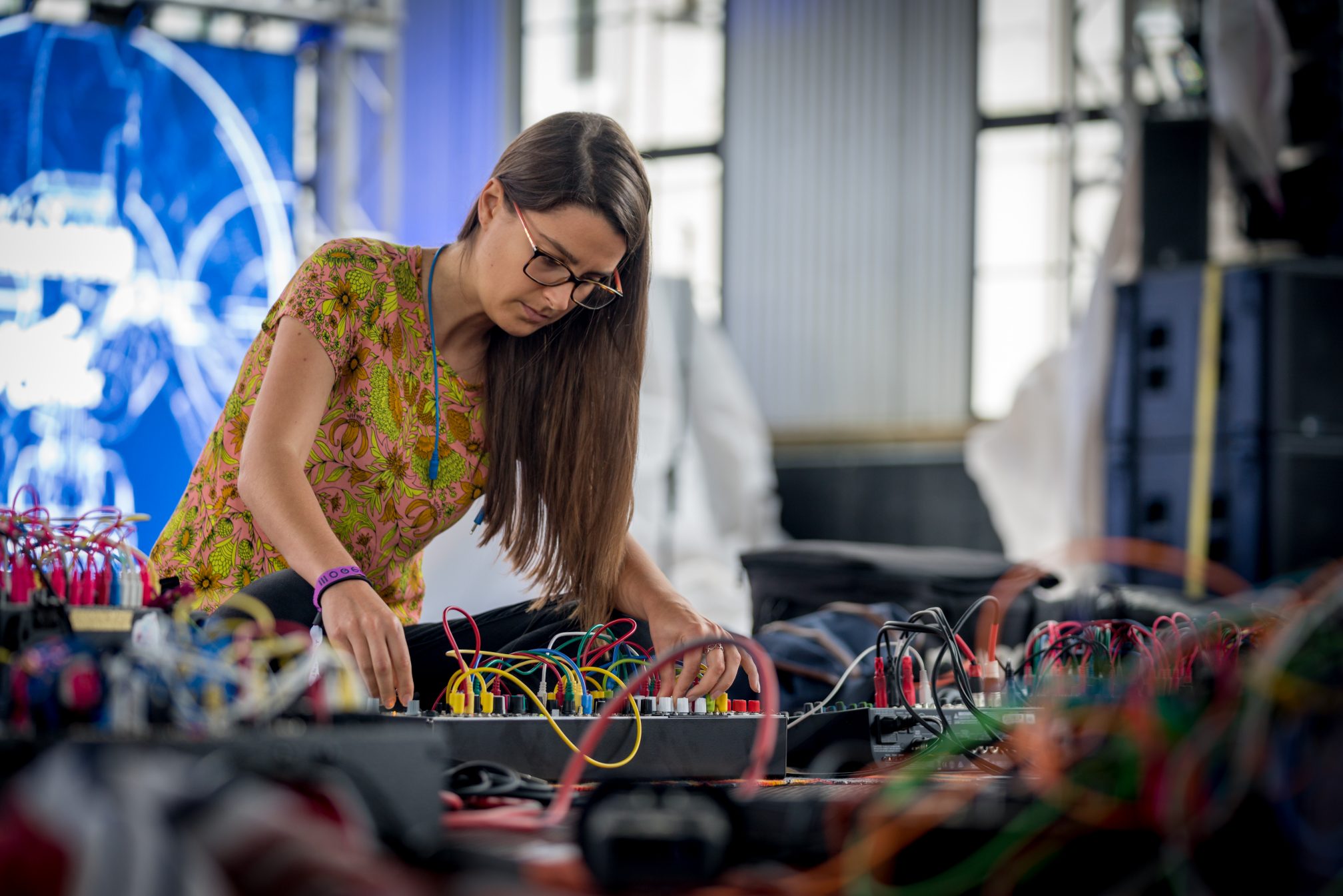 Diving into the myriad of complex issues surrounding representation of all kinds within dance music, composer/LCD Soundsystem member Gavin Rayna Russom commented: "With some of the early waves of music coming out of Chicago and Detroit. It was very clear I was a guest in that house. In 2018... whitening is a very big problem and we get to see it on the ground level, especially in dance music."


Performances ranged from straightforward DJ sets to curious and future-forward robots that created techno tracks by clacking on springs and old hard drive parts. Vocalist Deradoorian collaborated with Stephen O’Malley for a four hour durational, where attendees sat on the floor while the room filled with guttural growls and raspy chords. On the other end of the sonic spectrum at a sound bath, people laid down with eyes closed while crystal bowls, tuning forks and other instruments were used to create droning resonance for the mind to get lost in. 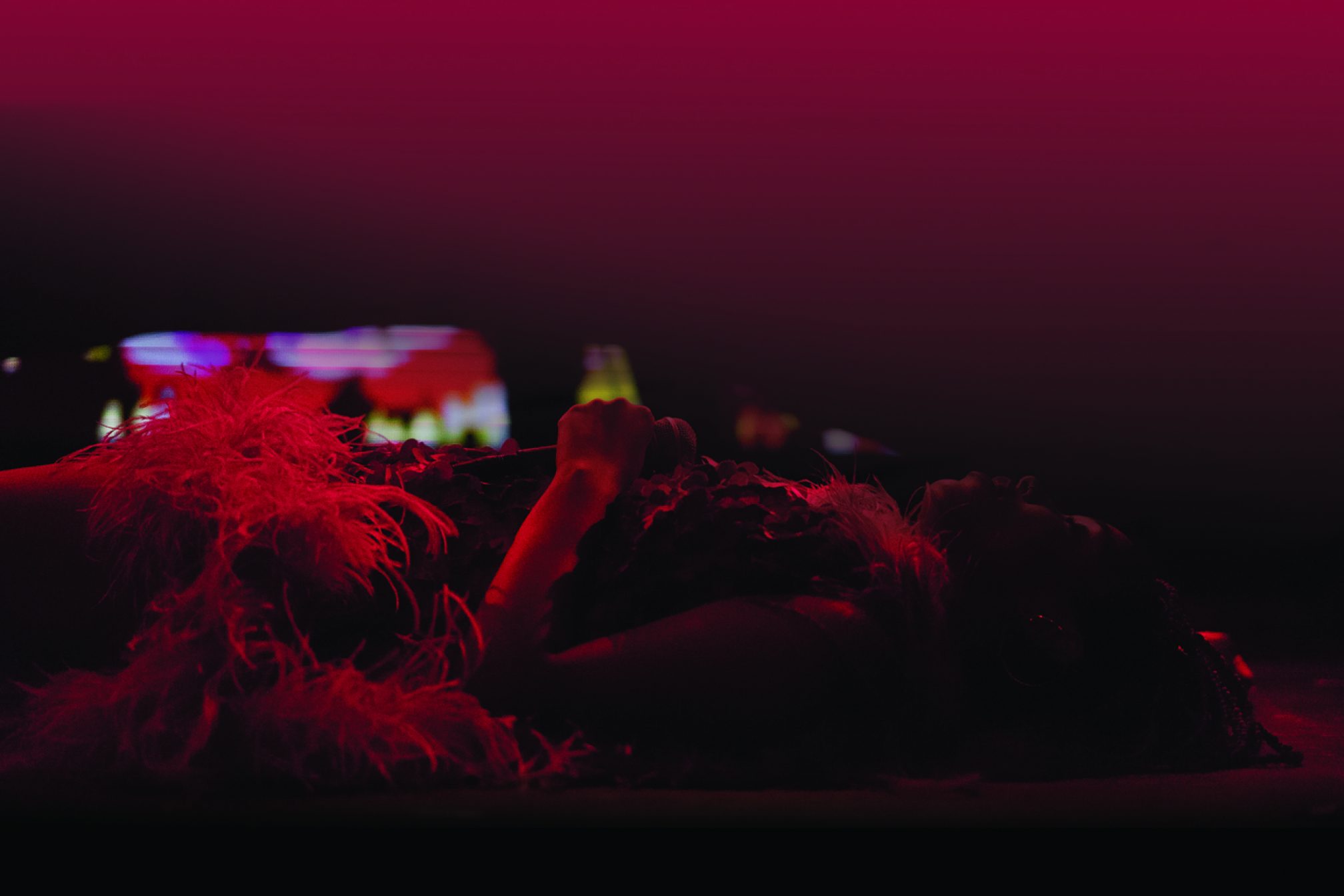 Not all sessions had patrons on the ground. A semi-outdoor stage on a basketball court played host to several DJs that played thumping tunes during the sweat of the afternoon. Honey Dijon served up warehouse vibes with an utterly euphoric four on the floor set. Headliner Mouse on Mars delivered twisting and frenetic sounds that melded live instrumentation with some percussion performed by robots. The group’s second set was supposed to make use of the venue’s spatial sound system, but that aspect fell flat, perhaps a carryover from glitches that were encountered earlier in the day during sound check.


As a whole, Moogfest felt a touch fractured when it came to the acts booked. The daytime events, which oft veered into academia and deep discourse, are valuable but can carry a weight if done back to back to back. At night, I wanted to cut loose. There were times watching very talented musicians where my brain at once appreciated what was going on, and was screaming out for uncomplicated, structured beats. While Moogfest absolutely had pockets for this to occur, there was more than one occasion at night where I was in kind with impatient audiences who murmured about in a directionless haze.

For those who want to delve into hardware, Moogfest offers a modular marketplace, providing space for vendors like Novation and Eventide to show off and let people test-drive their latest wares. Tucked away in the corner was a pop-up assembly line from Moog itself, where people could watch the company’s newly announced Grandmother semi-analog synth being assembled by hand. 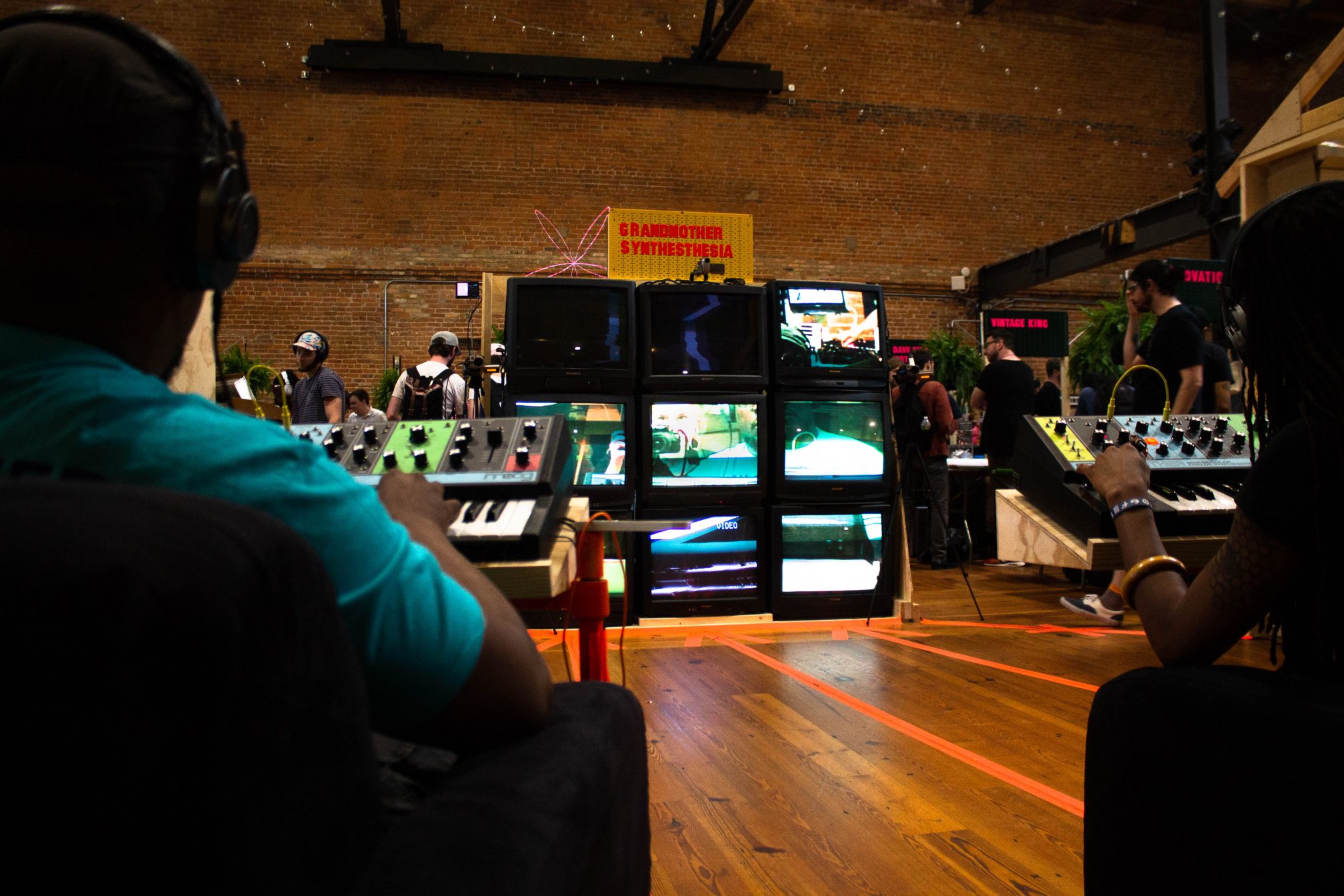 If you’re craving a more hands-on experience, Moogfest has a special Engineering Pass, which allows attendees to build an instrument designed especially for the fest. Some of these have gone on to see widespread release, like last year’s DFAM drum machine, although there’s always the tease that you might work on something that never becomes commercially available.


This year’s project was called the Subharmonicon, described as “a semi-modular harmonic kaleidoscope that divides into itself until everything that is up becomes down.” No prior experience was required to do the workshop, and classes were led by Moog engineers, who patiently guided everyone through how place all the through-hole components and solder the unit’s 308 points. Synths can often seem like mysterious, noise-making creatures but these workshops that allow people to get hands-on with the guts make it approachable and lend understanding. (Plus, soldering really is a good time and the satisfaction of seeing your work come alive is second to none.)

If you simply go to Moogfest for the evening’s performances, you miss what Moogfest is really about. This is not to take away from the importance or sheer fun of seeing headliners like Jon Hopkins or Kelela, but a nudge to remember that they’re only one part of this thinking person’s festival. The programming this year was admittedly heady and not necessarily a home run, but considering the circumstances, a round of applause is well deserved. Overall, Moogfest delivered on an enriching week that, among an array of musical choices, challenged attendees to consider the future of music and their role within it.