Just as Marco Faraone geared up to release his widely anticipated album 'No Filter' on Rekids earlier this year, COVID-19 began to cast its sinister shadow across the world, with most of us still oblivious or indifferent about the terrible long-term effects the virus would have.

Marco's home country of Italy was one of the first to be hit hard by the pandemic and one of the first to experience the trials and tribulations of total lockdown. So as all DJ gigs swiftly began to be cancelled, Marco had to shelve promo plans for his new LP – and witness the stress and trauma that the lockdown was having on his Italian friends and family.

'No Filter' was released in April, while Marco went into lockdown in his Barcelona apartment. During this time of isolation, Marco was contacted by author/journalist and activist Ian Urbina and was asked to contribute to The Outlaw Ocean Music Project.

Originally a reportage book exploring the many facets of "the last untamed frontier" The Outlaw Ocean uncovers the rampant criminality, exploitation and general madness of the "un-policeable" high seas. The project has now grown into a full multimedia experience and Urbina has recruited an army of musicians and producers to contribute musical pieces that help reflect, enhance and raise awareness of some of the shocking activity covered in the source material.

As Marco explans: "This is hard time for everyone, especially people in the music industry. Reading The Outlaw Ocean while alone during my lockdown in Barcelona — far from family and friends — enabled me to experience the book in a unique mindset that is reflected in my album."

The album is a departure from Marco's signature style and reflects the introspection, emotion and ultimately HOPE of his lockdown experience. Mixmag caught up with him to talk about some of the inspirations and processes behind creating this heartfelt ode to the oceans.

How did your experience of lockdown and isolation impact your creative process this year?

My lockdown started while I was based in Barcelona, it was incredibly intense. Seeing what was happening in Italy (one of the first countries affected by the virus) I knew what was going to happen in Spain. The situation in my country was really bad, my family were relaying the real status to me every day. I was hanging around with a mask already two weeks before the lockdown began in Spain, I remember everyone laughing at me, thinking it was a joke.

I have to say, during those days in Barcelona, nobody took it too seriously in the beginning, no one really knew what was going to happen. I remember on April 23, I had a video call with my friends Chris Liebling, Radio Slave, Truncate and Drumcell, during one of their weekly episodes of “DJs and Beers”. I told them of my experiences, of how people were skeptical at the start, then we had a really deep conversation about the initial bad effects the virus had on our lives and scene within just a few days of it appearing…then realizing this was only the beginning.

Obviously, when you’re forced to be in an apartment for a long time under circumstances you can’t control, many factors can influence your mood, emotions and state of mind. Honestly, I felt helpless, because no one really knew (and still we don’t) when this bad period is going to end.

But sometimes it’s only in our darkest hour that we find the light and inspiration to do something different.

As weeks of Covid-19 turned into months, I found myself suffering from negative emotions, I found I was unable to fully express myself in the usual soundscapes I would normally create for the dancefloor, as I also imagined that I was not going to play in a club for a long time. It felt mechanical, forced and not a true reflection of the times. Confined to my apartment in Barcelona, unable to connect with the outside world, I became frustrated and disheartened, producing new material, exploring musical soundscapes I had never touched before. For me, it was like opening my mind and ears to something different, a pure new challenge for me as a musician, artist and designer. 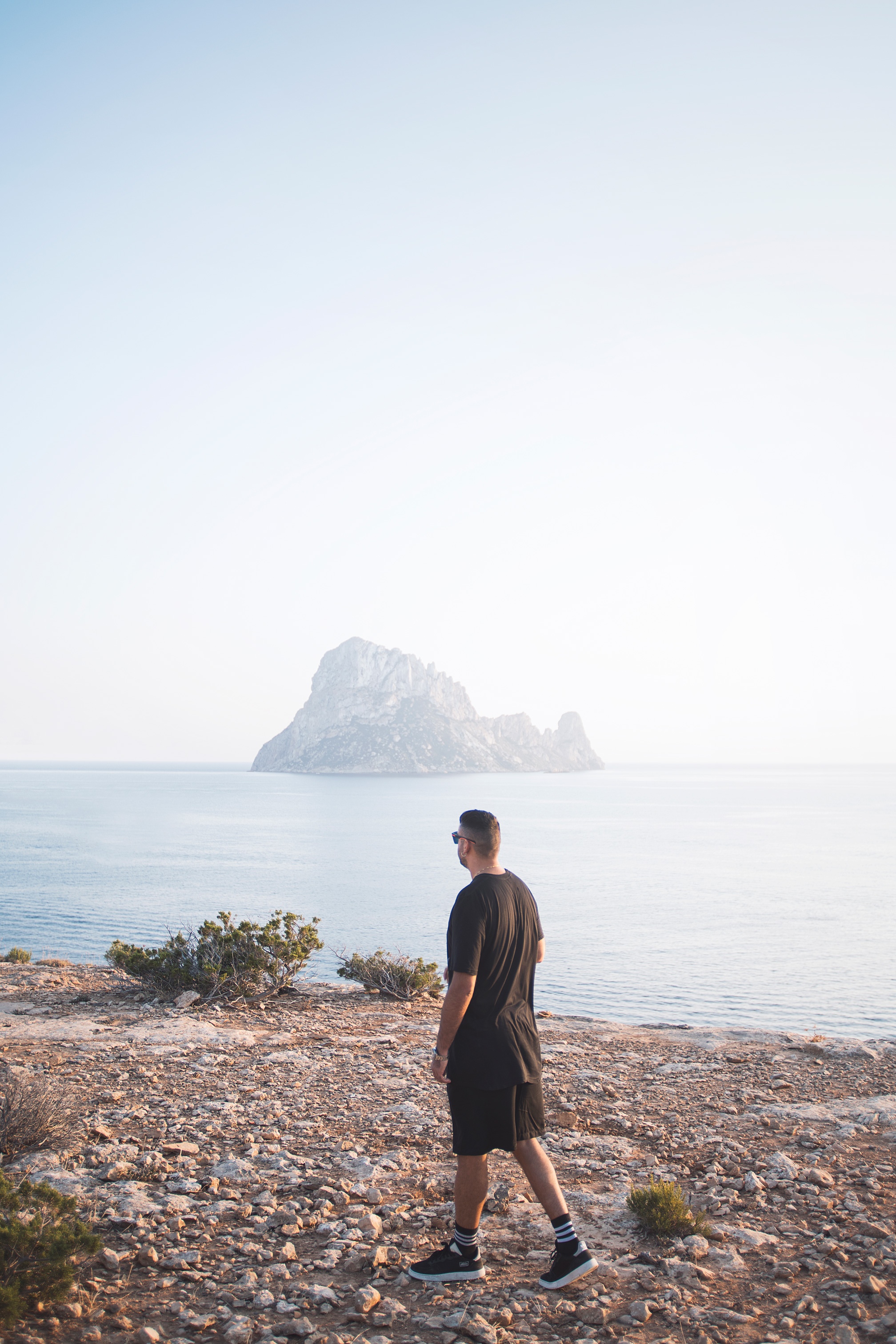 How did you feel when Ian Urbina contacted you about The Outlaw Ocean Music Project?

When I was approached by Ian Urbina to produce music for his book The Outlaw Ocean, I felt I was given a gift of inspiration. I felt blessed that during a time of intense isolation and despair I was granted an opportunity to harness my craft, to produce something truly meaningful. This project pushed me to explore the relationship between information, sound and emotion. It forced me out of my comfort zone as an electronic artist and into the space of a musical composer creating soundscapes that reflected this specific moment in time, soon to be history.

To narrate the true story about our dying earth. ‘Hope’ is an album characterized by the extreme polarities that we’re living in. It’s a reminder that everything can change in the blink of an eye, for better or worse depending on the actions we take. My hope is that we use this moment of crisis to understand better the world we live in, and our collective responsibility to take greater care of our environment and each other.

How did The Outlaw Ocean book inspire your approach to making the album 'Hope'?

Producing music while being inspired from a story is very helpful, it’s exactly like when you watch a movie and you imagine a specific sound or song for a specific frame or moment – there’s always a perfect soundtrack, even for every moment of our lives, don’t you think? Imagine a good moment or a bad moment, I’m sure everyone can find the perfect song for it. I tried to decode what I was reading and / or seeing, into all the video material Ian documented and sent to me, then transform it into music. These audio and visuals samples were collected by the investigative journalist over a five-year period spent aboard ships, fishing boats, coast guard fleets, police patrol vessels, and with environmental groups such as Greenpeace and Sea Shepherd.

Urbina documented the underrepresented lawlessness nature of the open sea, including traffickers, smugglers, pirates, mercenaries, wreck thieves, poachers, slaves, migrants and asylum seekers experience a harsh, risky and horrific way of life. Feeling creatively inspired by the material collected by Urbina in his book, I wrote an entire album composed of a broad range of electronic music with cinematic sounds, which pull at one’s heartstrings. My greatest satisfaction was when I sent the album to Ian and he wrote back, telling me he was speechless. When the record finally reached his ears, he felt that the music I had composed for him was absolutely perfect for the story and the emotions he wanted to communicate. In that moment 'Hope' was born.

The music is very moving. How emotional was the process of making the album?

Every title has a story behind it, it was incredibly emotional, I even cried while producing some of the tracks. Imagine an artist always creating beats and expecting his music to have a certain reaction to the crowd. And then all your plans turn to dust, and you challenge yourself to do something you’ve never done before.

With my preview album 'No Filter' released on Rekids in April, I introduced two or three tracks of ambient soundscapes, but it was an album created for the dancefloor. With this album, I created a complete musical journey, so very far from what I normally do. It’s more for listening and directed to a completely different audience, who probably don’t even know my music…or my name. For the people who already follow me, it will be a big surprise, I call it a “beautiful risk”.

How did you select which samples / instruments / ideas to use and what are your favourites?

I still remember the evening of the day lockdown began, it was raining, there was a very strong storm. That day, sad and so full of melancholy, I looked out of the window and saw a dull, empty, soulless city; Barcelona, one of the former metropolises of life. I sneaked out of the house to go and retrieve some of my equipment from my studio which was on the street parallel to my house. I quickly took my computer, a Nord Lead, my MPC1000 and a Doepfer sequencer, these were the first things I managed to get. When I got back to the house, I set everything up in the kitchen in front of the window. That was what became my “recording studio” for the next four months.

A few days later I was able to recover my Moog Voyager, which added some sounds later. I selected the instruments very carefully, thinking about what it would take to give me nice melodic lines and something to help me sample. When the pack of sounds recorded by Ian arrived, I had an explosion of creativity, sounds of the sea, SOS alarms…interviews. I had access to a treasure trove of audio and real videos. Some of the vocal samples were used, such as, in the intro 'Stop The Operation' and 'Our Duty', to the sounds of storms or rain used in 'Empty Streets', which was the first record I produced. Some of the other samples were cut and edited, some are not even recognisable! But I know they are in there.

What do you think the dance music community should be doing to help protect the environment?

The dance music scene has a great social impact, a common voice that in the past has fought for many causes and human rights. Every year, touring as much as I do, I’ve seen huge environmental developments. It’s getting better and better. From festivals to clubs, we have a responsibility to protect our planet and keep it tidy. Now so many more artists have a voice and community via their socials and we need to use these platforms to spread positive messages through the collective love we have for music.