What started out as a joke on Facebook has now taken the entire world by storm as alien enthusiasts and extra-terrestrial fanatics have descended upon Area 51 in Nevada for a raid on the premises.

Ahead of the September 20 raid, US government officials repeatedly warned the public not to show up to Area 51.

Officials in Rachel, Nevada, a town close to the US base, released a statement saying that they expected riots when people showed up and that the "Alienstock" festival could possibly turn into "Fyre Fest 2.0".

Despite all of this, there are reportedly already hundreds of people at the gates of the site. Even though the music festival was apparently cancelled, it appears to still be taking place.

We're here to bring you the best live updates from around the world as the Area 51 raid is underway.

Hundreds arrive at the site overnight 👽

Overnight, people gathered outside the gates of Area 51 with picket signs and appeared to dance and celebrate the event. With several events taking place around the area, this was the first initial sign of people forming in front of the restricted zone.

Naruto runner, early contender for hero of the event 👽

The 'Naruto Run' has been referenced a lot in the run up to the Area 51 raid. The distinctive (and of course not real) running style would allow raiders to sprint past the guards and straight into the military base. One young attendee managed to perfectly time his run so that it was caught on camera behind a TV reporter and honestly it's genius. It's also crazy how we saw him running at that speed.

Paul Oakenfold will play at the Area 51 Base Camp tonight 👽

Dance music fans and alien lovers unite. The first dose of electronic music royalty will arrive at Area 51 base camp today to welcome the aliens with open arms. Paul Oakenfold is no stranger when it comes to playing in crazy locations after he DJ'ed atop Mount Everest and outside Stonehenge with Carl Cox, but here he's taking it to the stars as he confirmed yesterday he would be playing at the Nevada hotspot.

There are several live streams from the gates of Area 51 happening right now.

Yet to spot any alien life though.

75 people gathered outside the gates, 2 detained 👽

According to Associated Press and Washington Post, around 75 people actually gathered in front of the gates to Area 51. There have been much larger gatherings at several festival sites nearby and also at base camp. Two people have also reportedly been detained. 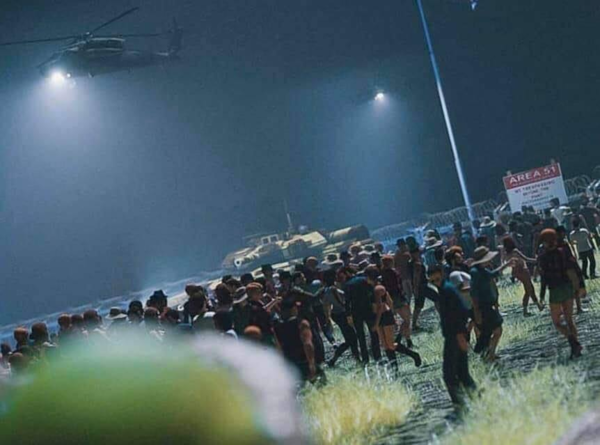 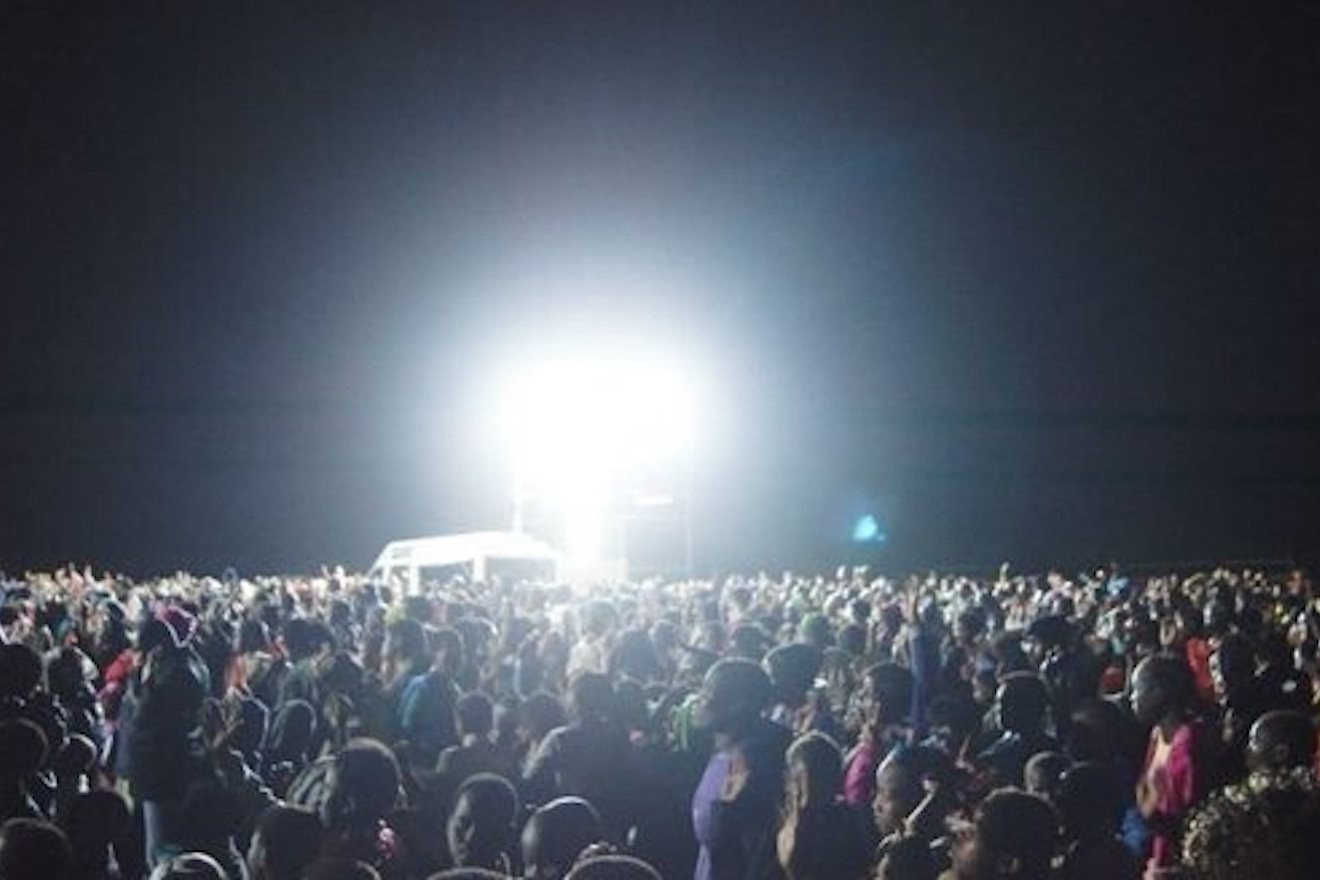 There are loads of fake photos that are quite convincing 👽

Despite all the warnings of potential disaster at the Area 51 site, the public still expected thousands of people to show up. While we now know only around 75 alien hunters arrived to storm the gates of the US base, there are plenty of fake photos floating around the internet that are quite convincing. Check out these two images above.

#Area51storm
The guy who started the area 51 raid group sitting at home like pic.twitter.com/0mR6r3cqwN

Walking into Heaven and seeing your homies after #Area51storm pic.twitter.com/PeCyn3l8kw

Memes flying in and Alienstock underway in Rachel, Nevada 👽

Of course there are no shortage of memes rolling around on Twitter, people are in genuine disbelief that this is happening.

Meanwhile in Rachel, Nevada, day two of Alienstock festival is now underway where there will be music, partying and a healthy dose of alien-worshipping.

Legendary rock band Foo Fighters have released their 'Live In Roswell' performance in honour of the Area 51 storming. Recorded in 2005, the band's gig is an added bonus for alien and rock-lovers alike. They dropped the album with a tweet that said "Remember: be polite"

In a surprise turn of events, Paul Oakenfold is now reporting live from Area 51 exclusively for Mixmag. On September 19, the dance music legend announced he would perform a special DJ set at the Alien Research Center in Hiko, NV and was heading out "in the desert looking for aliens." After DJing atop Mount Everest and outside Stonehenge with Carl Cox, Area 51 should be a walk in the park for Paul Oakenfold.

Margaret and Karen have been here since Tuesday. They say they caught themselves an alien. #AlienStock #Area51 pic.twitter.com/zC5VSEh1IU

Some diehard alien hunters have been there for four days 👽

It's a sunny day in the desert and more people continue to show up to AlienStock, despite the initial warnings. Erin Carson of CNET is also on the ground mingling with the alien hunters. Apparently this couple has been there for four days hanging out in the desert... Sounds like typical desert festival, to be honest. Coachella? Burning Man? No, it's AlienStock.

Custom made space cruiser rolls up to AlienStock 👽

Big shout out to Mick Ackers who has been on the ground sharing some incredible information. He just spotted an unlikely arrival getting wheeled off a trailer, what looks like a modified Mercedes-Benz with rims that are likely over 40 inches. The festivities are only just getting started.

People are hustling cans of gas here- I met one dude who got $50 for 5 gals. He has 23 left. #TheWasteland

With Area 51 being far from civilization and campsites for AlienStock approximately 20 miles away from the US base, the ability to leave the site has become a real concern for many travelers. The price for gas from second-hand sellers has apparently reached around $10 per gallon. After this weekend is done, many people might be stranded in the desert.

Mixmag's roving reporter and dance music legend Paul Oakenfold is two hours out from Area 51! He wont say he believes in aliens just yet, but he's up for finding out before his DJ set at the Alien Research Center tonight.

Well this is a first, there’s a tiny sliver of traffic in Ash Springs just south of Hiko. We will continue to monitor road conditions in Hiko and Rachel. So far no significant impacts to traffic are being reported. @NevadaDPS #buckleup #drivesafenv #eyesontheroad #nhpsocomm pic.twitter.com/7W7FUBhrgi

Traffic is accumulating around Area 51, which is rare for authorities 👽

The Nevada Highway Patrol-Southern Command seem to be quite surprised there's a small bit of traffic accumulating in their area. The land around the US government base, from Rachel where AlienStock is, to the site of Paul Oakenfold's set at Area 51 Basecamp in Hiko, Nevada, usually consists of wide open desert roads.

According to USA Today, one of the arrests made last night was because of public urination. Lincoln County Sheriff Kerry Lee said to the network that “We arrested one guy for indecent exposure out of Canada at the gate,”.

Turns out that the Rachel, Nevada police were actually pleasantly surprised by the lack of people that turned up to 'storm the gates':

“It’s a relief that it’s not as bad as we thought it was going to be. My nightmare was 30,000 people. I truly thought we were going to have bumper to bumper.”

With our roving reporter Paul Oakenfold nearly at Base Camp, we'll have more updates soon.

Dancers are starting to warm-up at Alienstock 👽

The party is now underway at AlienStock.

Really hoping we get an E.T. shuffle.

It's a long way from Los Angeles to the middle of the Nevada desert, but many heading to Area 51 Basecamp to party with the aliens are making the journey. Of course Mixmag's legendary roving reporter Paul Oakenfold is one of the brave souls to do it and he's making most of every minute.

Paul Oakenfold is 20 minutes out! 👽

As night descends on the Area 51 Basecamp, Paul Oakenfold is nearly on site and is preparing for his headline set for the alien hunters. He says it's been quite a long journey to get to this point, but he's ready to find some extraterrestrial activity. 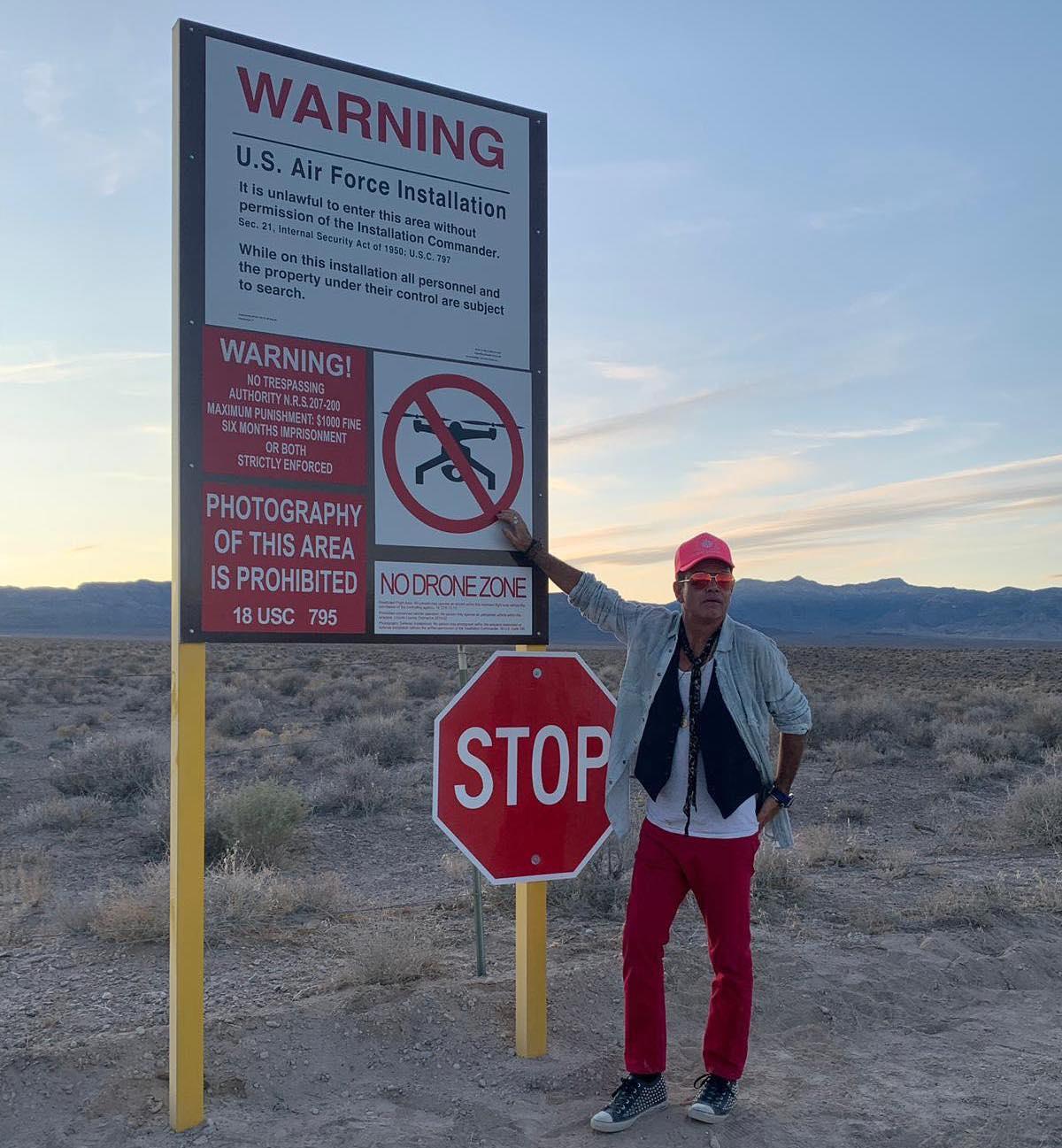 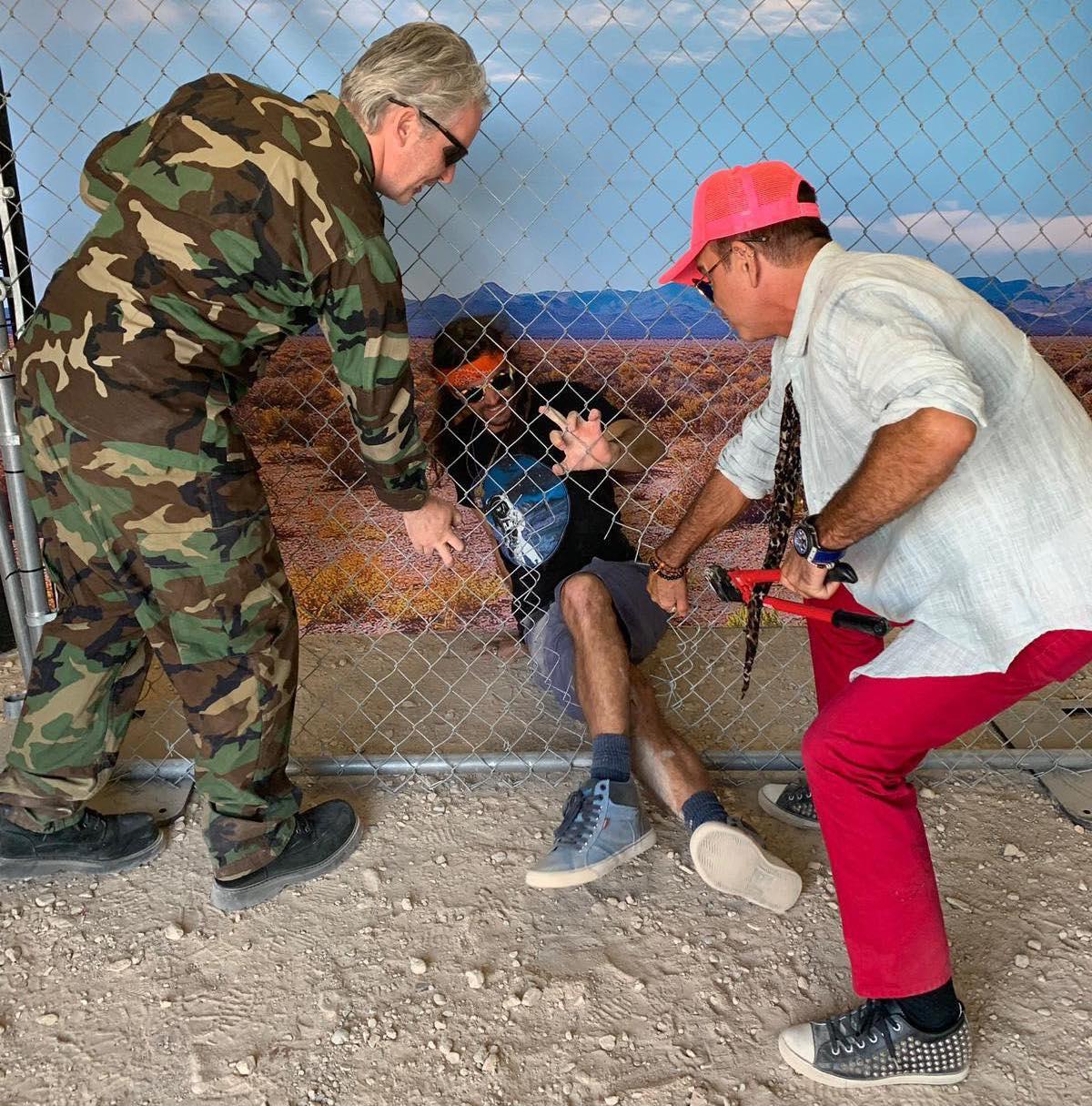 The eagle has landed.
The dance music pioneer Paul Oakenfold is finally on site at Area 51 Basecamp.
He's really earned his Alien Correspondent title.
We love you, Paul!

PAUL FOUND THE ALIENS!!!@pauloakenfold made it to Area 51 and is about to play at Base Camp.

What a wild ride it's been. We're signing off for the night but we'll be back tomorrow to see how the set went#StormingArea51 #LiveFromTheArea51Raid https://t.co/VPyVt3KTPO pic.twitter.com/Vbp4yjZjCN

Paul Oakenfold​ has met an alien! 👽

It's about time for Paul Oakenfold to take the stage at Area 51 Basecamp and he's linked up with what appears the be an alien life-form... Have a great set Paul, we'll check back in with you tomorrow to see how it went. Tell them, we come in peace!