Dawn just broke over the Black Sea, but you wouldn’t know it. There’s no sunrise ushering in those Saturday morning vibes, just a thick mist enveloping a small but dedicated crowd who are in it for the long haul.

We can’t see beyond the beach and hillside flanking the dancefloor. The world beyond may have ceased to exist. Beginning around midnight, scheduled to pause when the last legs cave, Kafes is about escaping urban realities for the weekend. Punters sleep when and where they like, whether on the sand or in nearby apartments.

The coastal venue creates a real intimacy, and the journey to get there says it all. To find this open-air hedonist’s haunt we spend just under an hour darting between lanes on one of Istanbul’s terrifying highways, before leaving the soaring skyline and ancient monuments behind to meander through country lanes, past suburbia, and, finally, reach the whistle-stop of Kilyos. Passing trade need not apply. 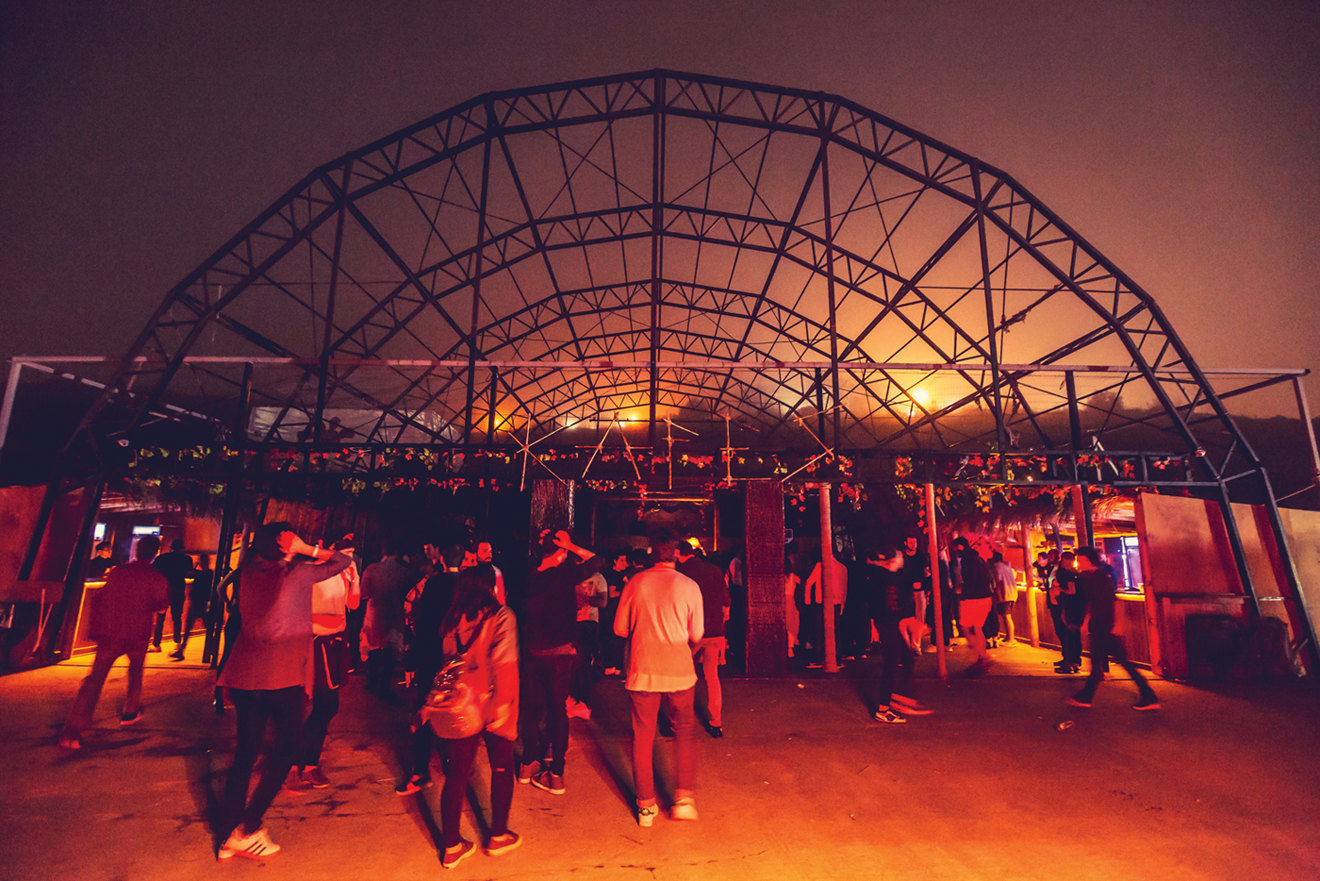 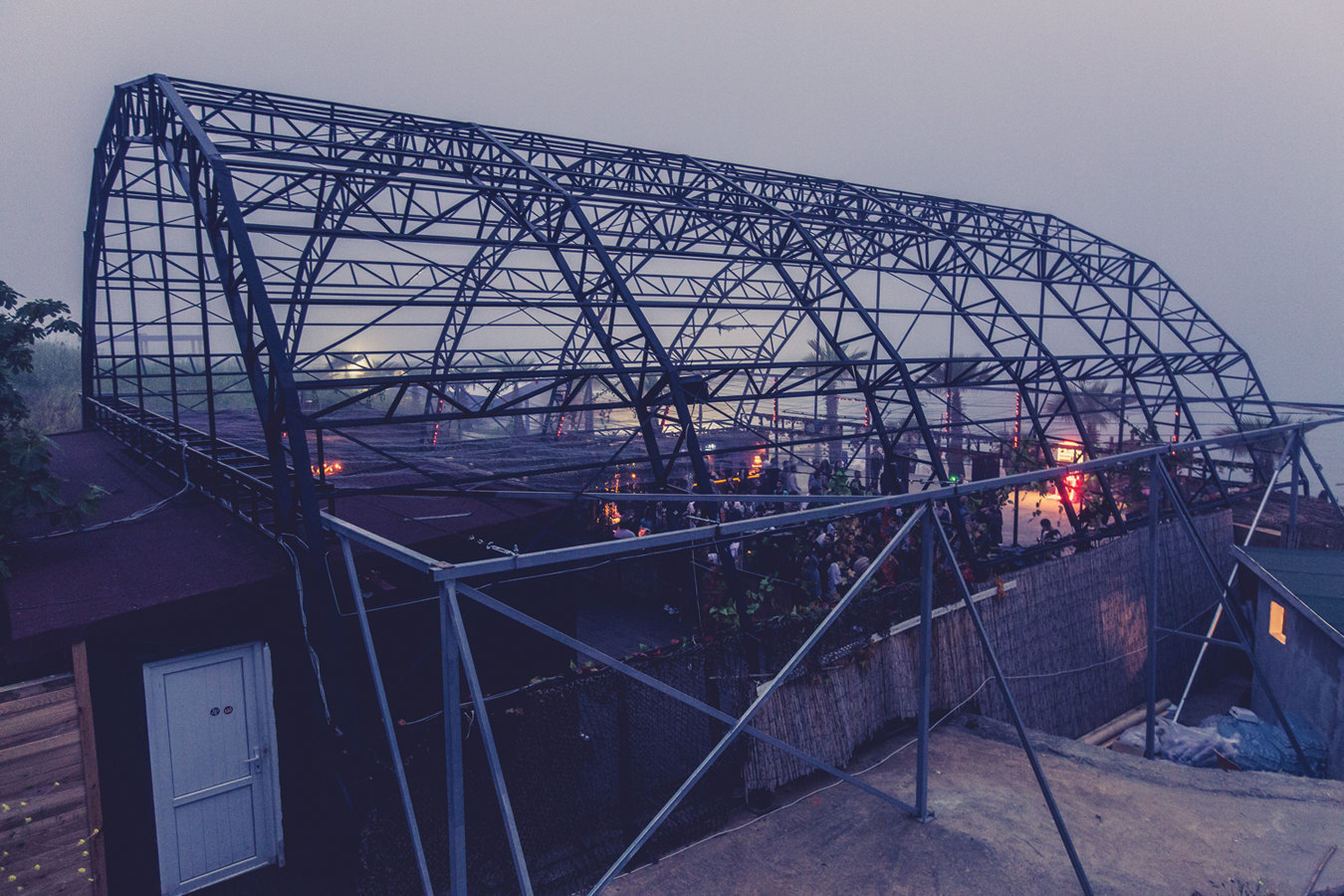 Once arrived, the club’s main room – if you can call it that – is reminiscent of an aircraft hangar left to decay. Only a metal skeleton still stands, the booth lit with a kitsch lamp lifted straight from your nan’s side table. Away from the darken wooden dancefloor, a seafront lined with sun-loungers takes the role of chill-out area, giving ample opportunity to kick back, or spin out.

A short walk beyond a pizza guy and an imposing staircase leading to what may or may not have been a lifeguard’s watchtower at some point is a separate space for daytime antics, a currently empty swimming pool giving some idea as to how things might go down once summer properly lands.

The site can be used in different ways, meaning there were no problems when, a few weeks before Mixmag visits, Solomun pulled in thousands for his set. Tonight, though, London’s Egg has stopped by on its world tour, with Adam Port and partner in rhythm &Me commanding a celebration of lo-slung dirty house suited to smaller confines – trippy, percussive, engrossing. 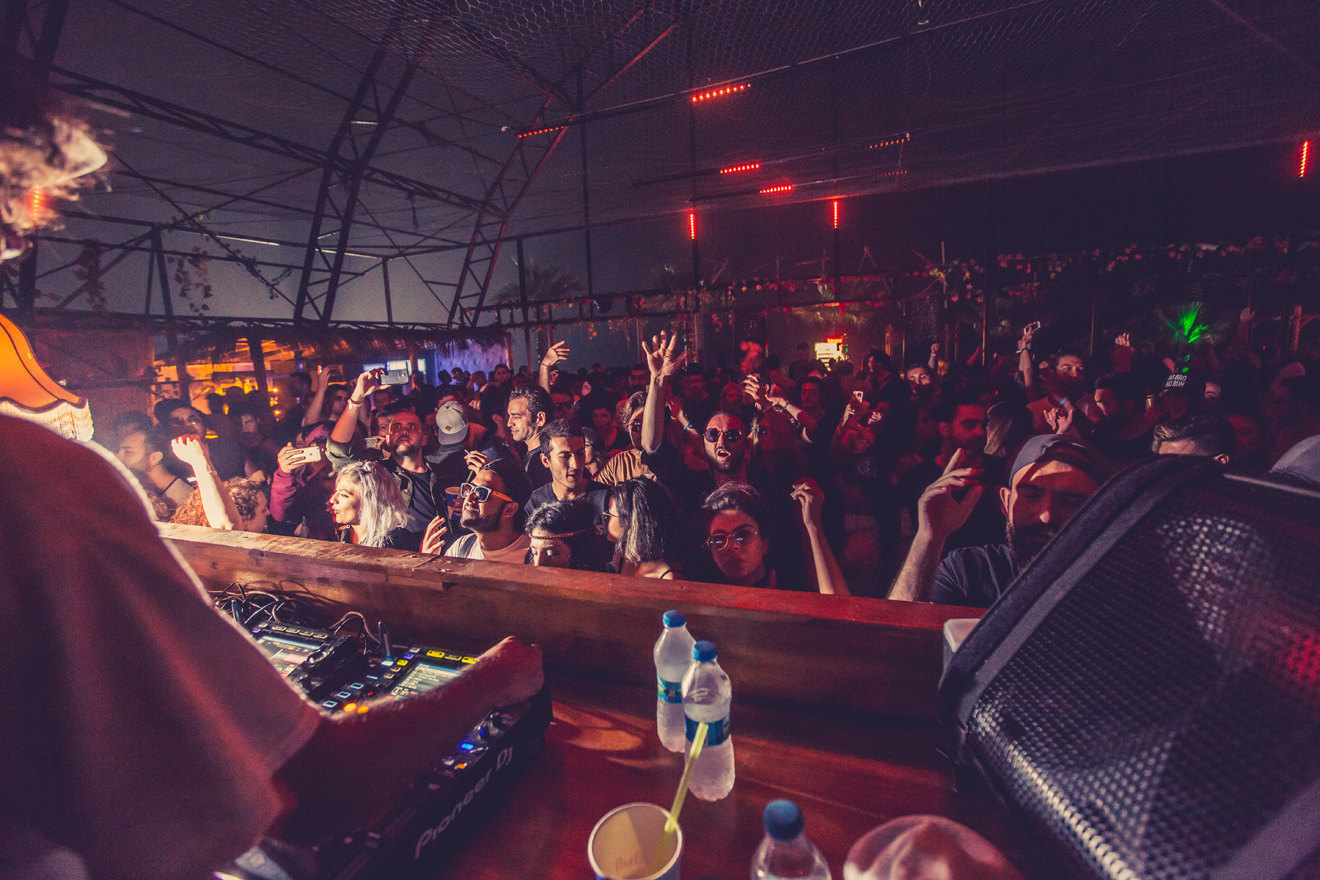 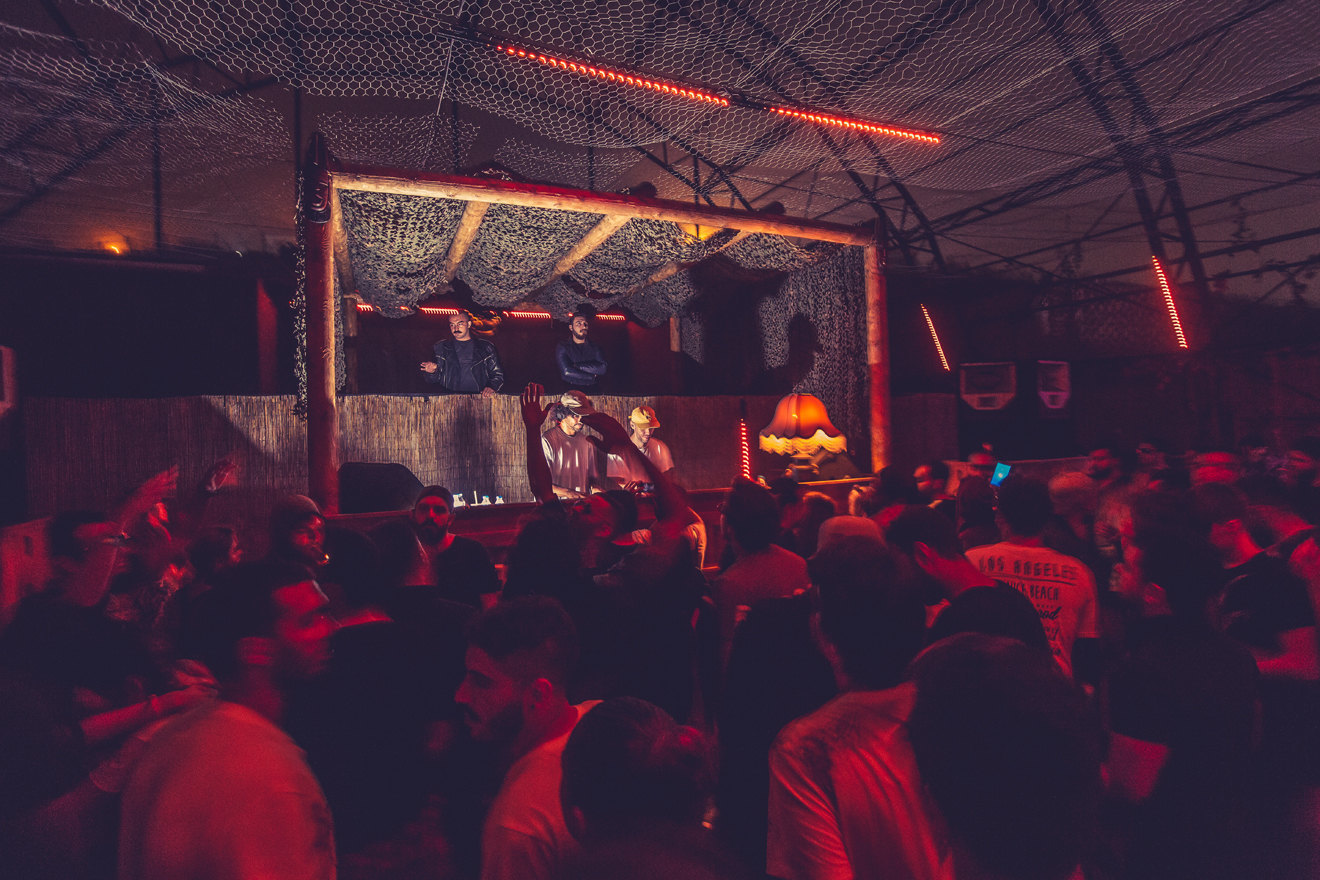 “I don’t know, probably some shitty Turkish pop music,” replies Alican Yuksel when we ask what the average club back in the sprawling metropolis would play. He’s quick to point out that, despite dedicating his life and livelihood to the sounds now emanating from the Kafes Funktion-One, the majority of locals haven’t embraced house and techno. Or at least, they haven’t yet.

One of the main bookers at the venue, Alican has flown the scene’s flag for a decade or so. His comrades, the two men running this place, have been around longer. Co-producer Murat Uncuoglu, we are told, was ‘the first great DJ of Istanbul’, while Volkan Gunduz runs Beatgate, a brand responsible for events across Turkey. When the trio realised the potential for weekly events in the warmer months at eight-year-old Kafes the address switched from a small festival site to its current guise, a plan that seems to be working, luring heads with one intention: dancing. To the right of the DJ booth, figures are either leaping about with an abandon rarely seen in most clubs these days, or writhing in those cosmic moments where music and body create sweaty, glassy-eyed symphonies.

"I just think we should educate the next generation"

“We see there is a big potential – the younger generation are really into their music. Every day we get messages and calls, even tonight I’ve met people on the dancefloor talking about becoming DJs or promoters,” Alican says when we ask whether electronic music is growing in and around Istanbul.

“But do you know any Turkish DJs? There aren’t many, man. There should be labels, producers, like, coming out from the city. There are some really small guys trying to survive, but still we have a long way to go. The future does look bright, though, I just think we should educate the next generation. Maybe do some workshops, interviews, videos, I don’t know what the best thing is but we have to reach them.”

Inspiring talk, but while the crew are eyeing up city centre locations for a potential spot that could double up as a studio, training ground, and meeting point for budding artists and scene players, they face an uphill struggle. Culturally, repetitive loops are not high on the agenda. 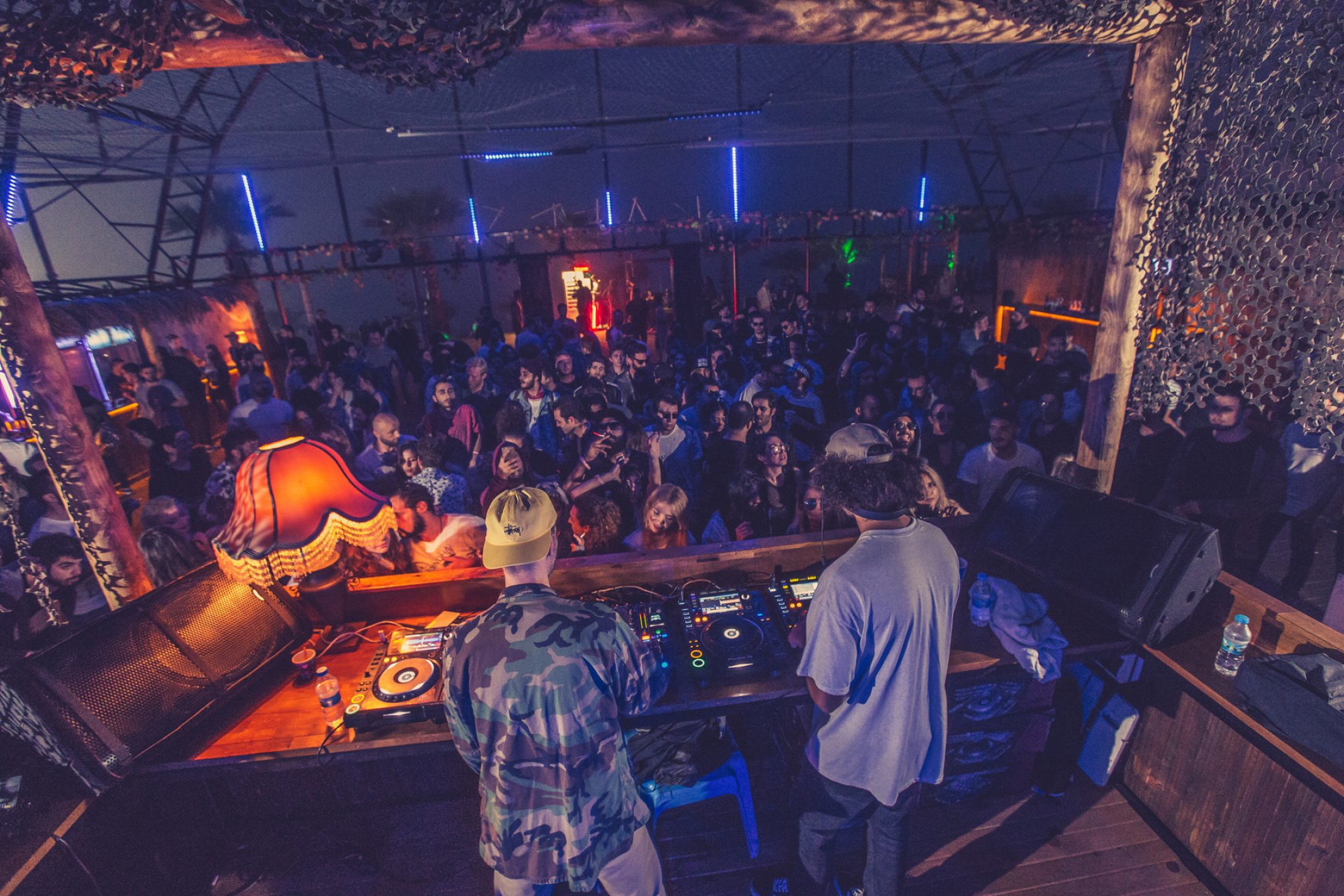 “In the city there are a few clubs, open-air clubs,” Murat interjects. “But they play commercial music, they have restaurants inside... ...There is a very cool bar in Bebek, called Lucca, which for me is one of the best places in town, it has food but after ten or 11 they go to the bar and get a really good crowd.”

Lack of widespread interest in underground clubs is only one of the obstacles. Turkey’s president, Recep Tayyip Erdoğan, isn’t known for the liberalism that dance music often represents. After overcoming an attempted coup last year, from the outside looking in his policies are becoming increasingly hardline, winning a recent referendum by a narrow margin to gain far-reaching powers. Electronic events have not escaped interference, with a gradual moral realignment of Turkey seen by some to be more in keeping with a religious, rather than secular, state. 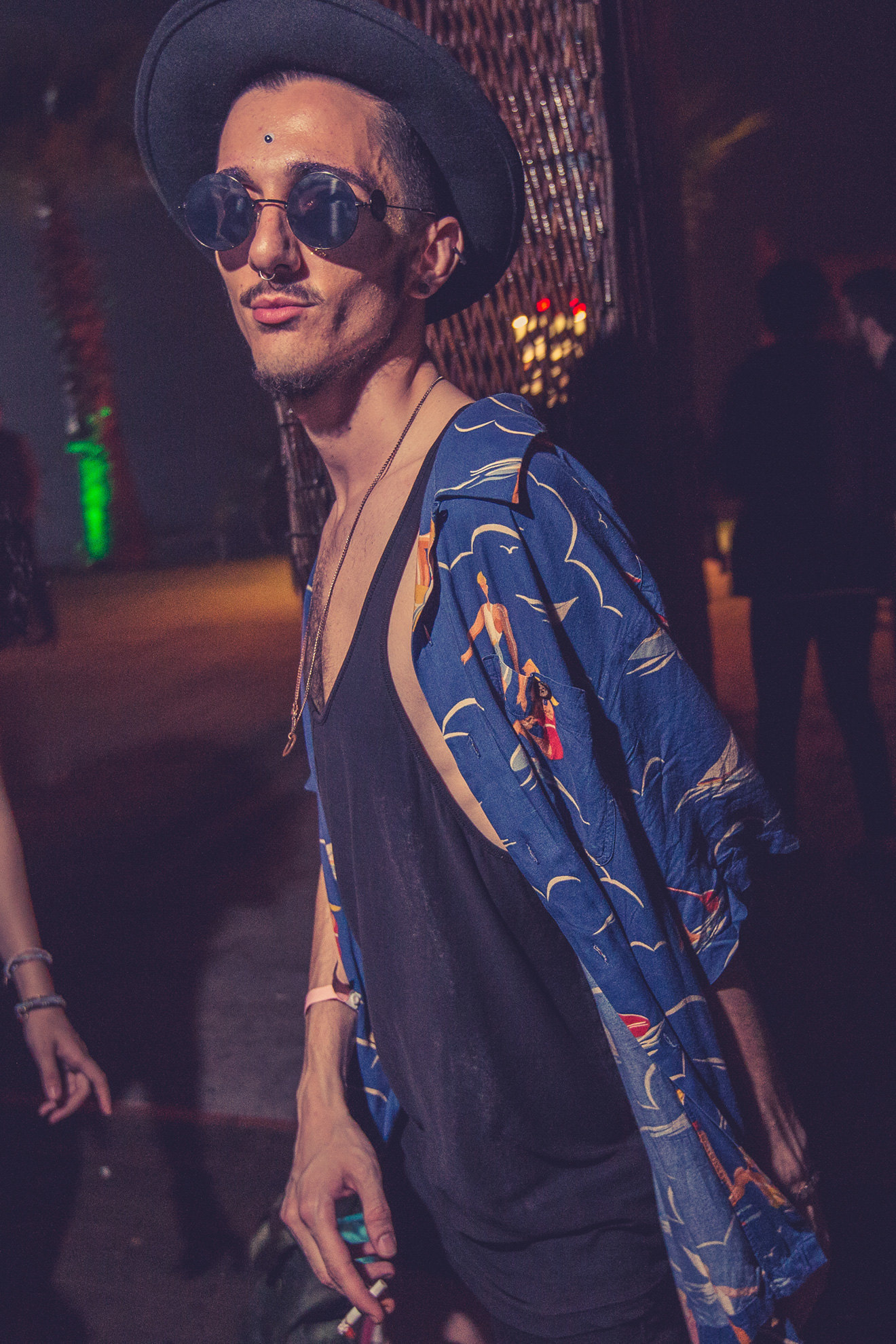 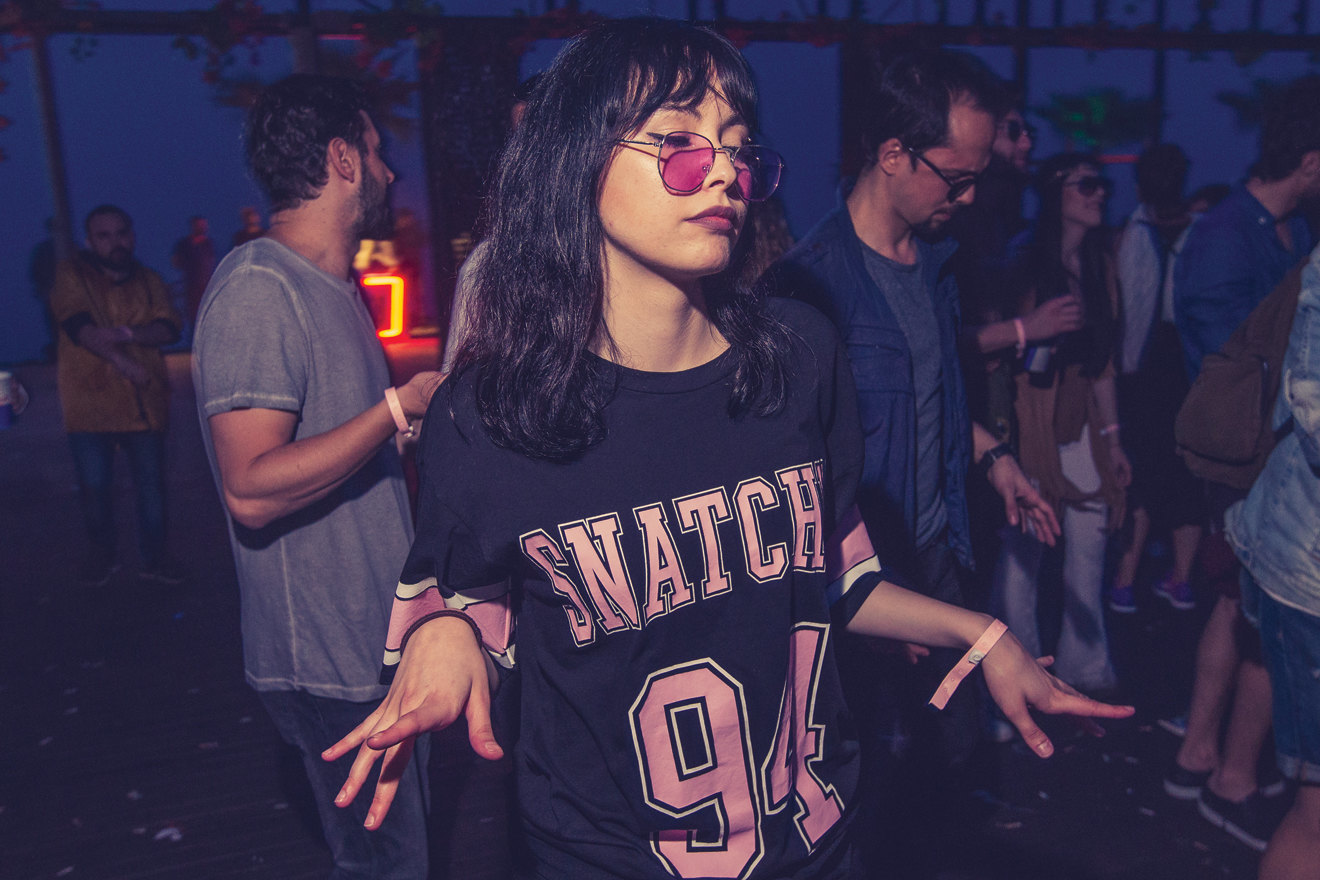 “The change of laws the government has made about sponsorship makes running clubs a little hard. You know, alcohol and cigarette sponsorship are restricted,” Alican explains. “It’s hard to put on events here because of the crazy currency – against the Euro we are at a disadvantage on exchange rates of one to four, so we can’t sell tickets the same as in Europe. That means it’s really important to have sponsors to run a club or do a festival.”

“That’s why, normally, ten people would be doing this job, now we are just three people. We have to keep it small to survive,” adds Murat. “But there is a very young population in Turkey. And this young population, they are very into the music, and are very open-minded. We saw that from our parties, our club, when Solomun was here there were six thousand people dancing on a Sunday.

“Mediterranean and Anatolian people are passionate, they live with their heart. That’s why they always want to be in the party. The government cannot change this; if they push hard, more people will push back,” he continues. “And look at the last election: among eighteen to twenty-five-year-olds 65 per cent said no to the president. And this is very important: in two years there will be another vote, and then the 16-year-olds will be 18. And I’m sure they will again say no. We trust the younger generation.”

This recent change in policy hasn’t gone unnoticed by those staking their claim on the dancefloor, either. We run into Istanbul reveller Sarjan Mugat taking a breather from the tunes, and he makes it clear that, in addition to a sense of belonging, ownership of the scene is something people take very seriously.

“All the underground deep house and techno venues were better maybe three years ago. The recent regulations from the government, from Erdogan, have meant places are closing down. But in the summer, Kafes and Suma are bringing great DJs and we want this to continue. These parties are ours.”

There’s more to the story of financing issues than politics alone. Murat and Alican were involved in legendary venue Indigo until spring this year, when the downtown address with a global reputation fell victim to rent increases. Budgets for good bookings became unworkable, costing an already close-knit scene one of its crown jewels. 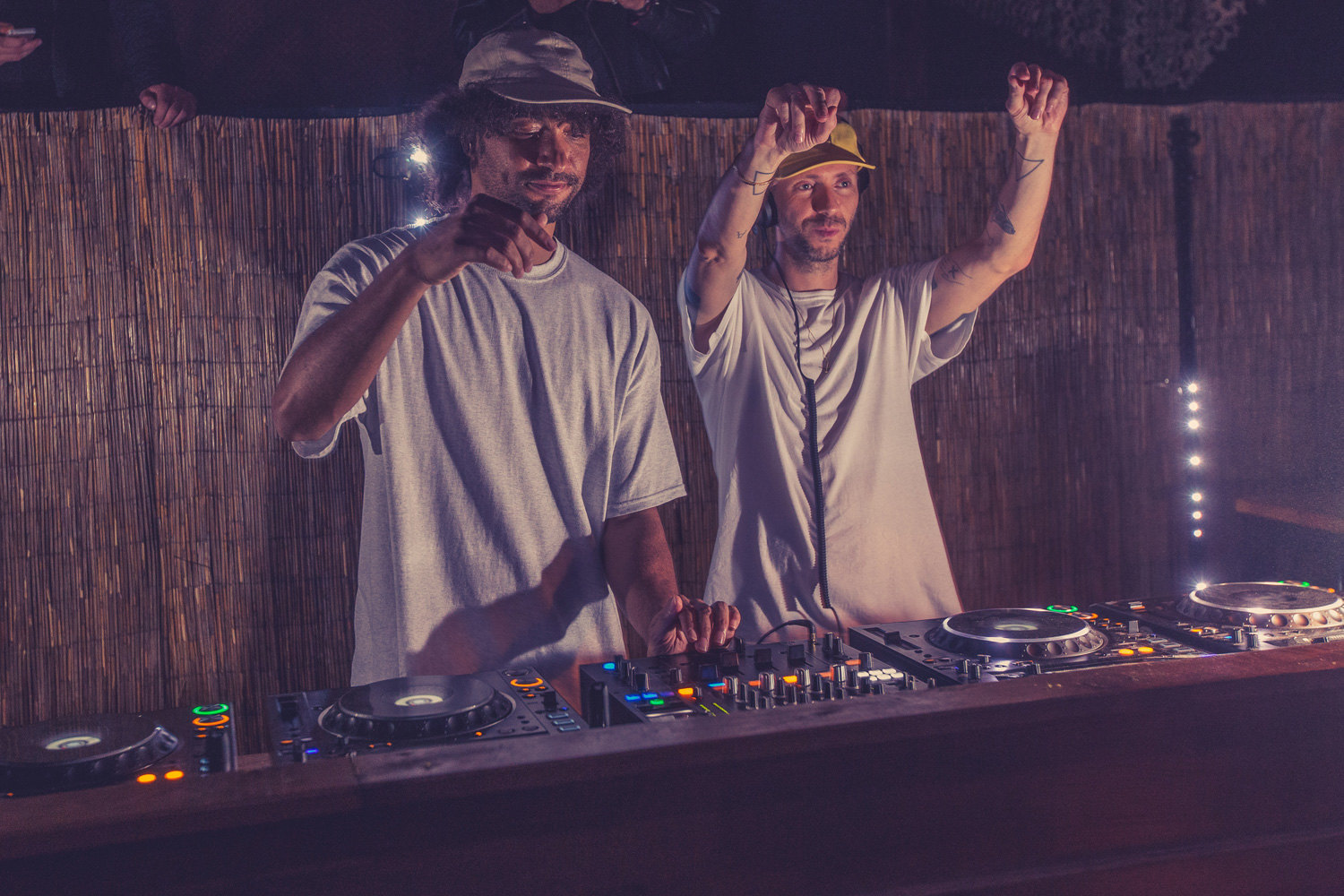 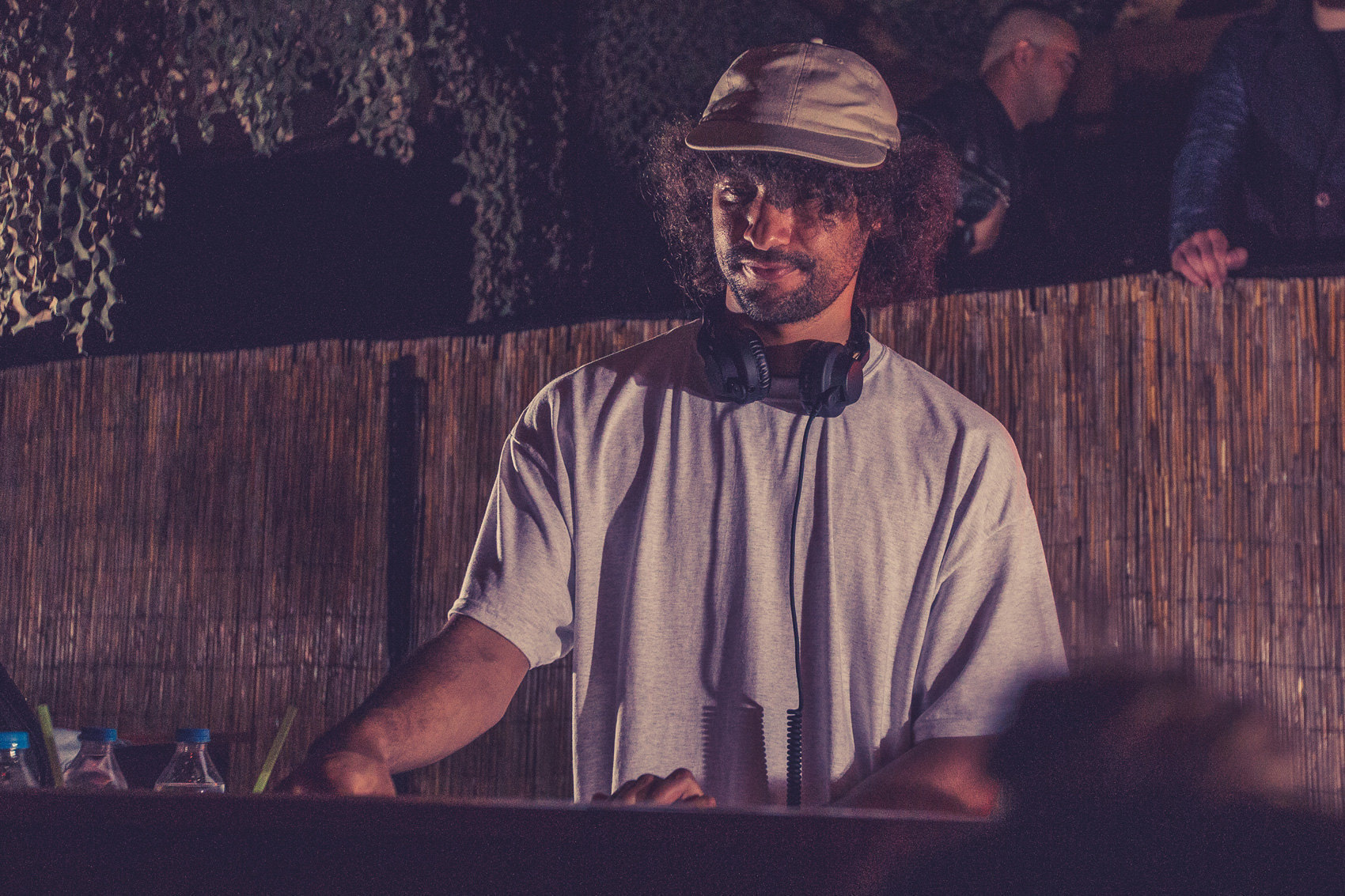 “There are twenty million people in the city but sometimes we would struggle to fill the place, which had a capacity of around five hundred,” Alican explains.

The impact of that closure was felt beyond the country’s borders, as Niamh O’Connor, Co-Coordinator of Egg’s tour, tells us. Currently working dates from Martin Buttrich and club resident Kyle E at France’s Cesarhof 24-hour festival, to clubs in Dusseldorf, Athens, and Warsaw, the Turkish leg was plucked from the jaws of adversity thanks to a shared love of similar artists.

“Alican and I were emailing each other for about a month and a half, working out headliners and budgets for the date. We had decided on booking ANNA for Indigo in April, everything was signed and sealed, and it was in the first batch of shows we announced.Then I got an email – ‘I’m really sorry, but the landlord has decided to raise the rent on the club and it’s too expensive, but we will find another venue’. 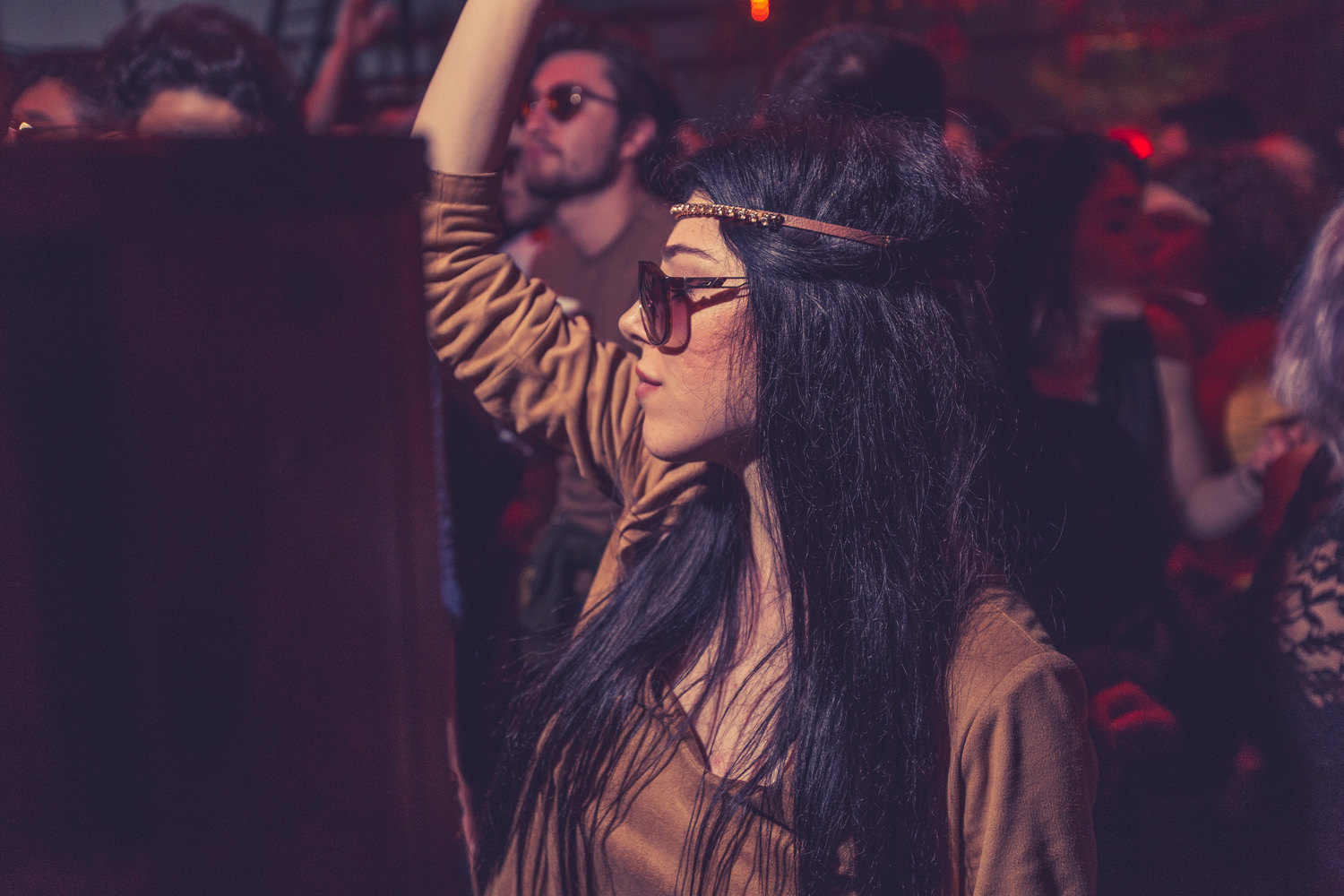 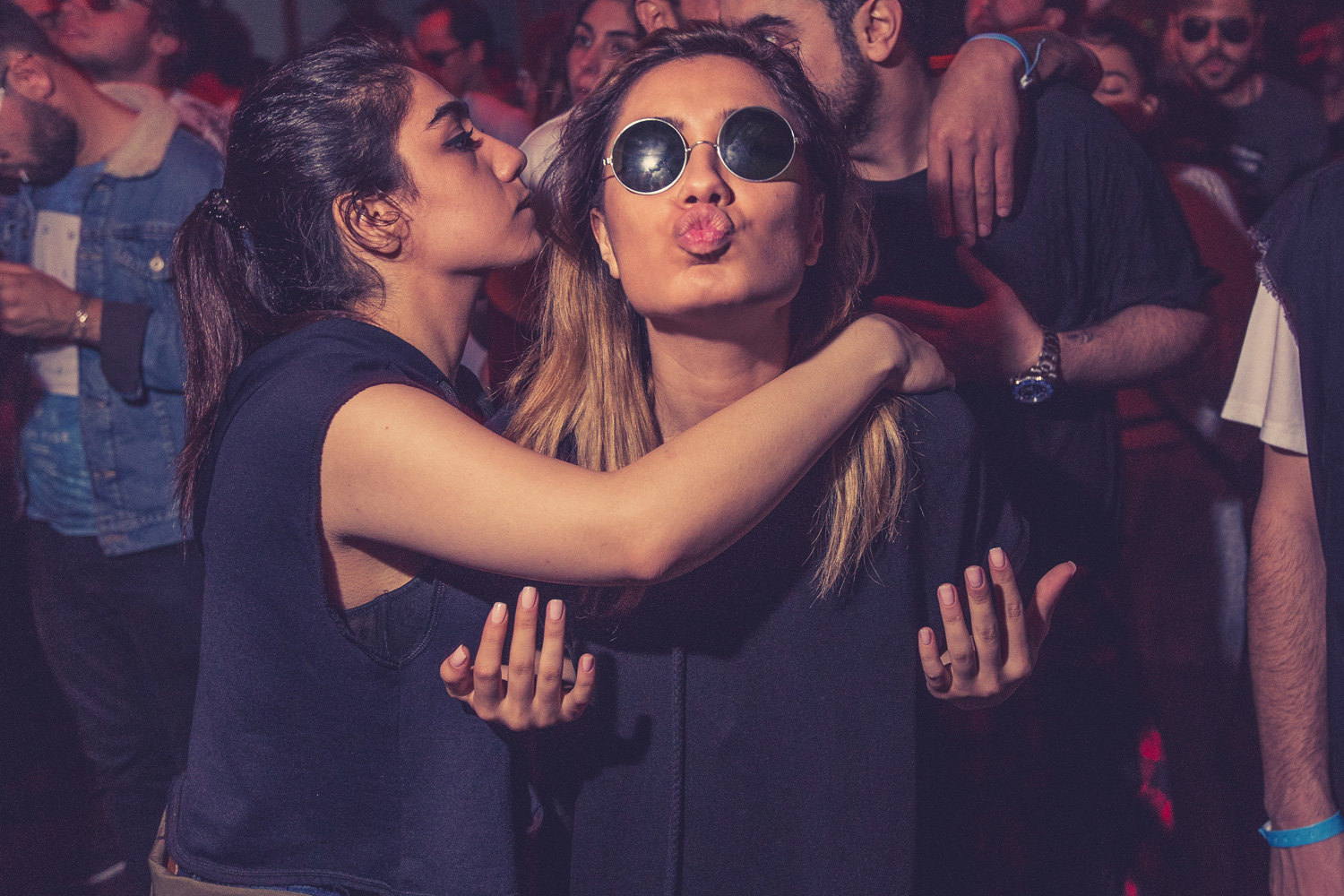 “Everyone was understanding: that’s the music industry, you move on. Then I got an email around a month later about a different venue, an open-air place where summer programming was already booked. They sent a list of DJs we could do the night with and the option of &Me and Adam Port was really good for us as we love having them at Egg with the rest of the Keinemusik crew.”

As Saturday’s last tunes begin to play out we feel privileged to have discovered Kafes. The team behind the good times here could never be accused of being in this for the wrong reasons. What they have may be tiny when compared with gargantuan dance machines in Britain, Europe, and the US, but it’s incredibly special.

Having immersed ourselves in the thick of it, the passion is tangible. It radiates from the venue’s iron girders and blazes from every punter who has made the kind of effort to be here most would deem too demanding, covering a distance too far for anyone other than those who truly get it. And, with many claiming to be regulars, there’s every chance you’ll find them here again next weekend, front, centre, and giving it their all.