Trace dance music culture right back and Bristol’s always been on the map, cheerily infiltrating the wider rave landscape. Whether it’s the early West Country free parties, the d’n’b legacy of Roni’s Full Cycle crew or the infamous Lakota club, the city has incubated and accelerated dance music since way back when.

Its thriving creative ecosystem is just as influential today. And no other Bristol venue represents this more than skatepark-turned-world-class-destination-club Motion. An intense, bewildering, maze-like space that induces a hyped mania among its consistently rafter-packed crowds at long-running parties like Just Jack, The Blast and In-Motion, it’s reputation is strong in all musical corners and it can host everyone from Fatboy to Method Man & Redman. But it’s the people and culture behind it that really stoke Bristol’s fire: the team behind the club’s no-rules bass mecca The Blast, for example (Rob Cracknell and Tom Hoyle) are responsible for all Fabriclive bookings. Tom Paine, meanwhile, runs a host of major events including Love Saves The Day Festival and the WOW stage in Glastonbury's Silver Hayes dance area.

“That’s what I love about the Motion story. We’ve all used it as a spring-board and flourished professionally from there,” explains Rag Satguru,
who hosted the very first Motion event and has been involved in all its major developments. He now manages the likes of Eats Everything, Jackmaster, Groove Armada and Joris Voorn. “For a regional club that’s phenomenal. It’s such an honour to be part of that success and the club’s community.”

Community is key: trace Motion’s history back and you’ll find a culture of collaboration and cooperation that’s cheerily, unapologetically influenced the club’s DIY ethos, direction and development since day one. Which is where our story begins… 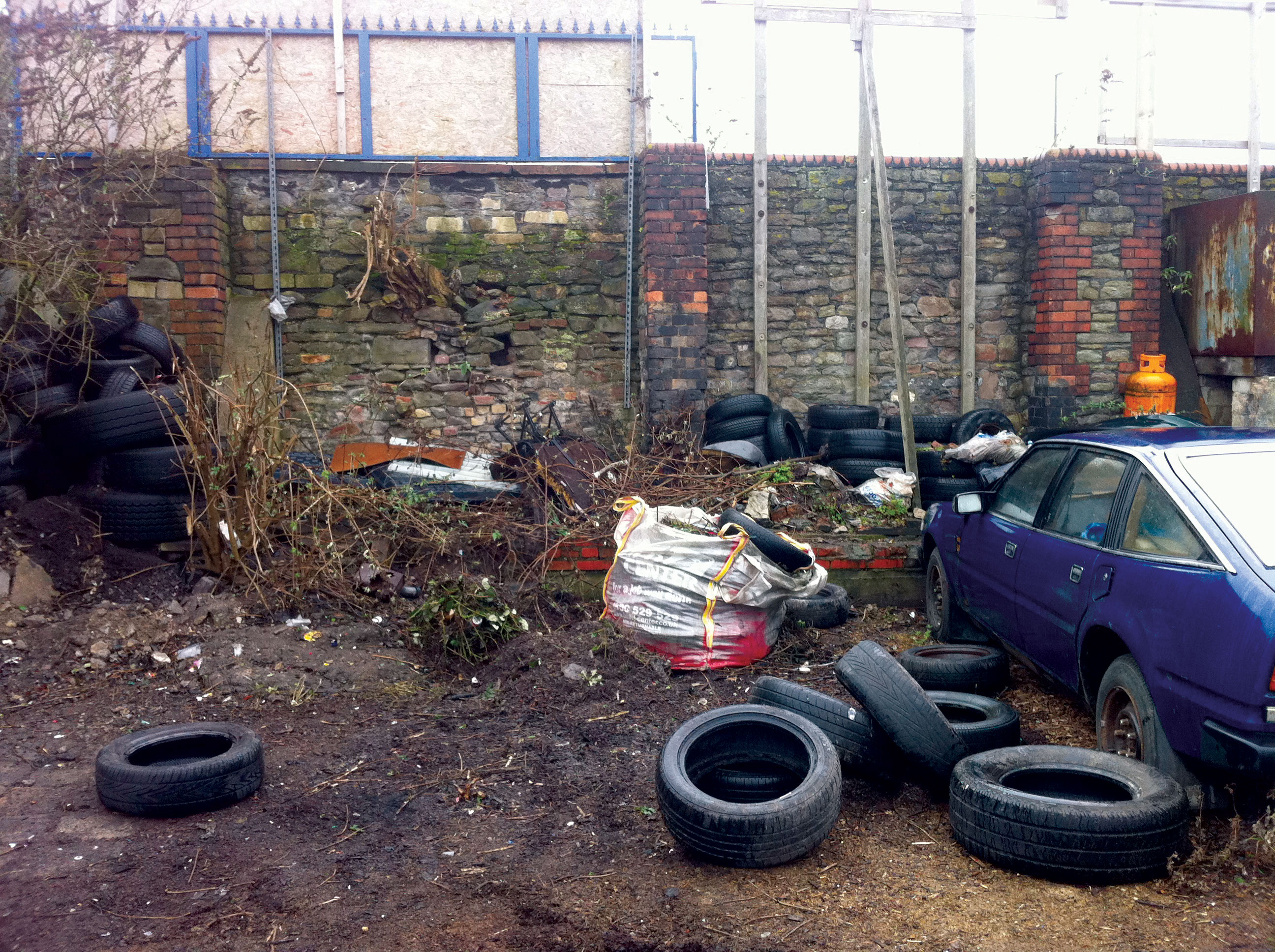 I made the skatepark in 2005 with a £20k loan. I had no collateral, so the bank manager asked for it back. I said, ‘Sorry mate, I’ve spent it!’ Long story short, I had the lease on the café and terrace area and we started doing some parties. I met Rag and we hosted some raves in the half-pipe. We just put a canopy over the top of it like an indoor tent. We’d finish at 6am, clear up, then open up the park. I lived on site on a tour bus for four years: running the bar, cleaning the toilets, working the door, doing the books. Proper DIY. Like it should be. Everyone gets involved and makes sure it works. It’s crazy looking back from where we’ve come from. It was pretty ghetto! The yard was scrapheap with burnt-out cars, tyre piles and rats everywhere. But we’ve pushed on and pulled together. It’s been a family and a home for me.

Tom’s a legend! When you run a skate park you’re pissing money away. But the way he invested in it and made it work was amazing. I was at the first opening jam in the skatepark – he put me on his BMX team and I barely left the place. Those old days were special. Before the parties we’d have our own overnight gatherings; the park closed at 10pm, we’d lock up and spend the night in there, eating Chinese takeaway and riding until 6am. Tom organised loads of tours around Europe and the UK. When we weren’t on the road competing, I was working at the park, doing maintenance, fixing bikes and things, then doing maintenance for the club. I learned so much being there. 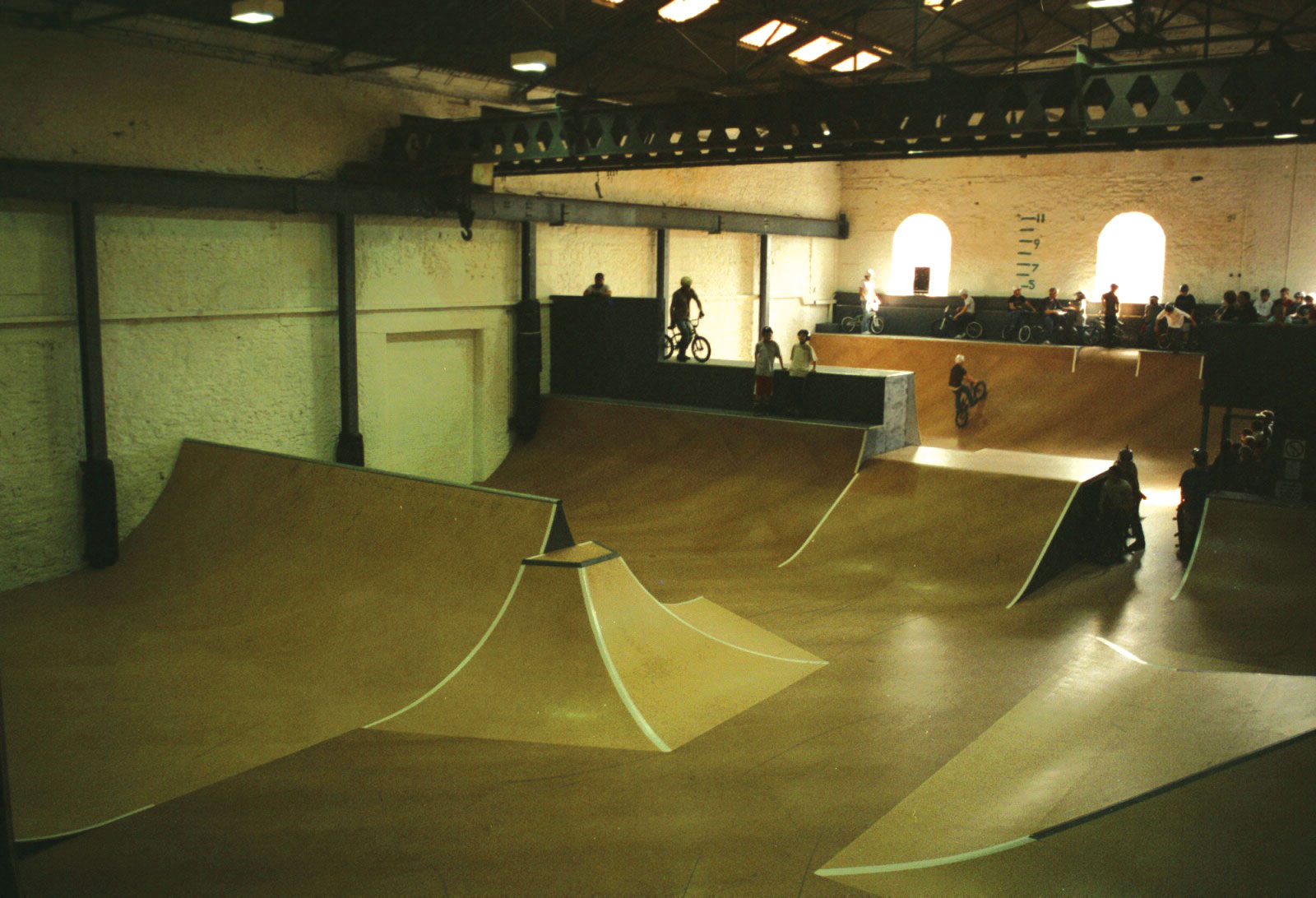 I’ll never forget that first party. Me and Rag were doing parties called Secret Sanchez in random locations and we found Tom’s skatepark where we could use the bar and terrace. We took everyone over by boat. They were walking in, nudging each other, pulling their phones out, telling their mates to get down. It was legendary; we played music until 6am on the terrace as the sun was rising. It was a beautiful Balearic moment for Bristol.

Eventually the terrace parties were shut down – we were told they were illegal. So I asked Tom if we could organise an outdoor party elsewhere on the site. He said no, and I was ready to leave the meeting. But then he took me up to the top of the vert ramp and said we could do it there. It seemed like such a big space! We were doing 300–500 capacity parties, and this was 1,000. I thought I could never fill that, so I went around Bristol asking promoters to get involved and ended up collaborating with Blowpop. Those parties were mental. People doing laughing gas and running down the ramps. Class. Then Tom Paine came in and helped us legitimise everything. 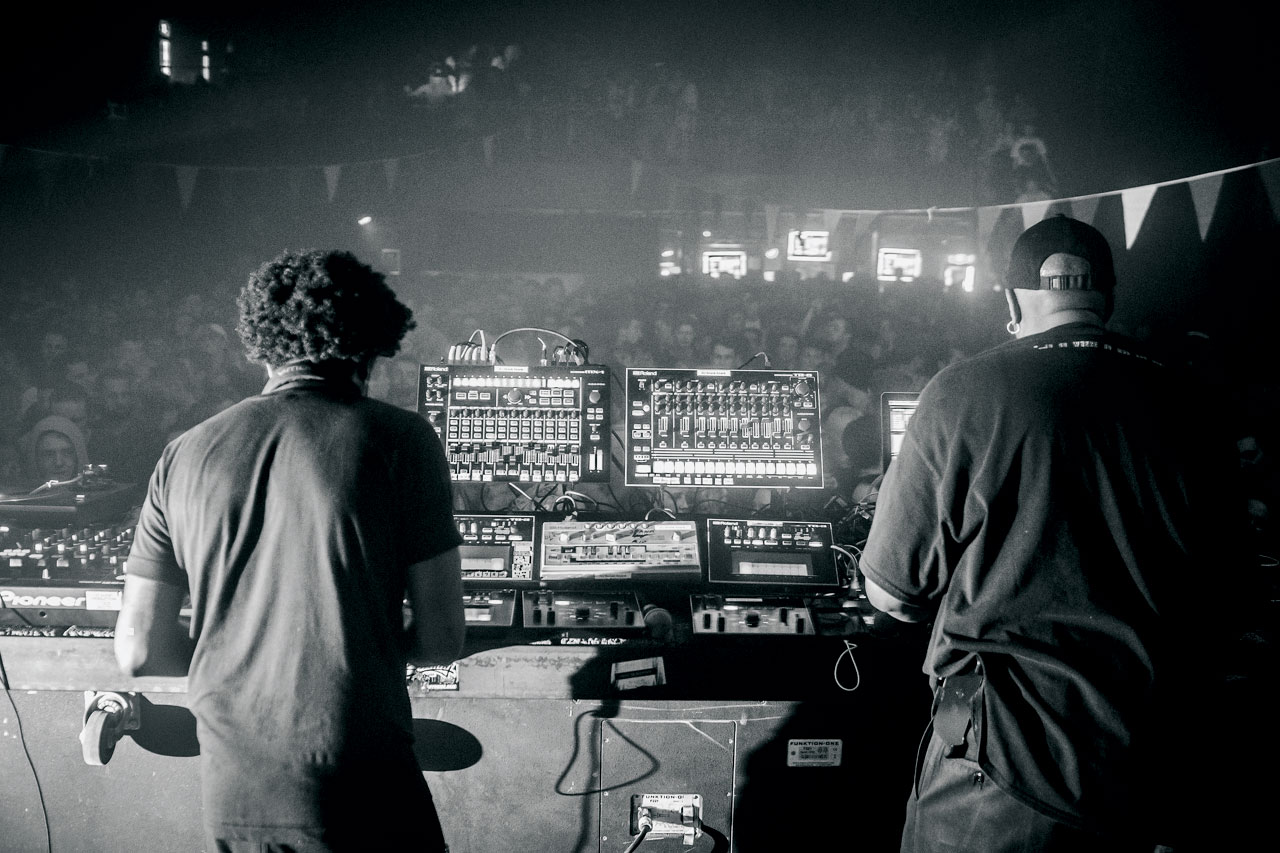 When dubstep started to really explode here in Bristol, we all felt it was the right place and the right time. My favourite one was one of our first shows in Motion with Joker. He was local, young and just at the start of his journey, and he’s there headlining. It felt like untrodden ground. The venue was developing quickly, the music was moving fast. We were caught up in something special. I felt like we were doing something right… then after the parties we’d end up spending the next 24 hours doing something very wrong! 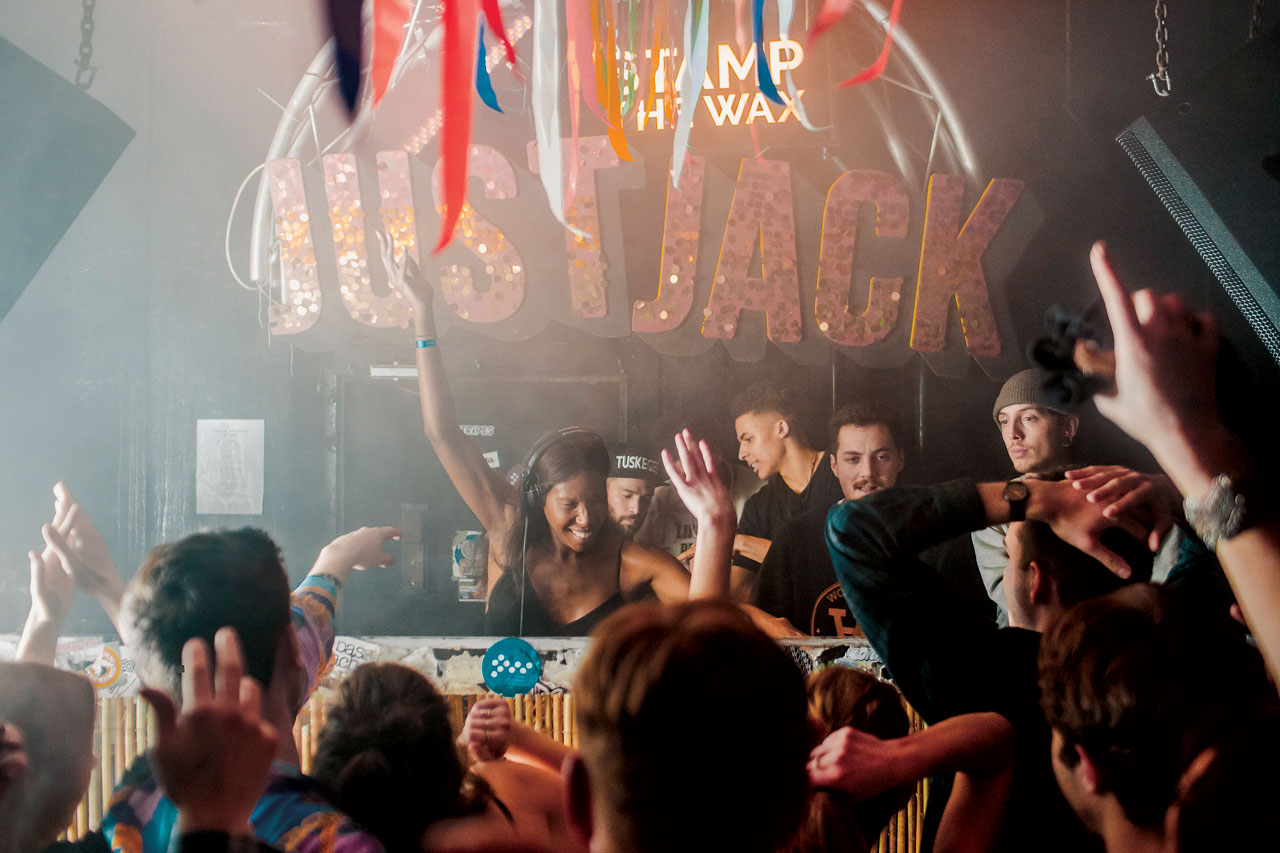 Everyone who’s ever worked there knows how special it is and has worked hard to preserve it. Tom living there. All the BMXers helping out. Dan Deeks, who’s now an owner, would throw so much of his soundsystem kit in there for next to nothing, just to make it sound great. And me, too: I went down for one of the first big parties and could see it was out of control. I’d been running bars and had started working at Glastonbury so I offered to help out, make sure everything was safe, do the licencing, get the documents in order. I was only supposed to be there for a few months… I ended up being there for five years! We kept tightening things up and working out ways to be even bigger or better, which effectively meant promoters leaving their egos at the door, pooling resources, coordinating and pulling in even bigger acts and crowds.

The first time we all worked together was on The Greatest Show On Earth around eight years ago for New Year’s Eve. We teamed up with Just Jack and Love Saves The Day and got Arcadia to set up their Afterburner stage with all the aerial acrobats and flames. We had Secret Garden Party doing sideshow attractions, Simian Mobile Disco, Jamie Jones, Altern-8 all playing. It was one of the biggest NYE parties that had ever happened in Bristol and a real statement. It felt like there was nothing happening like it anywhere else in the UK. 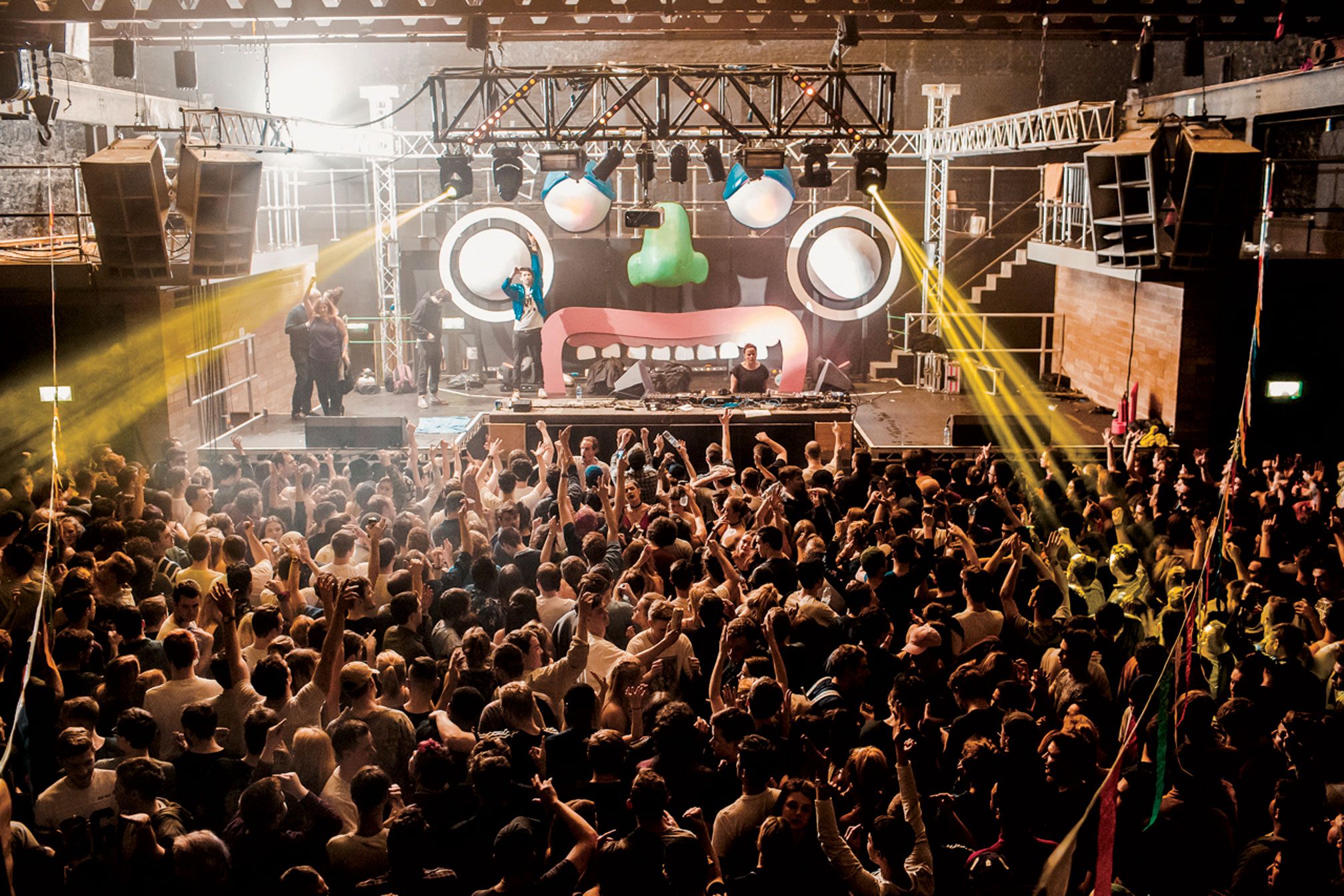 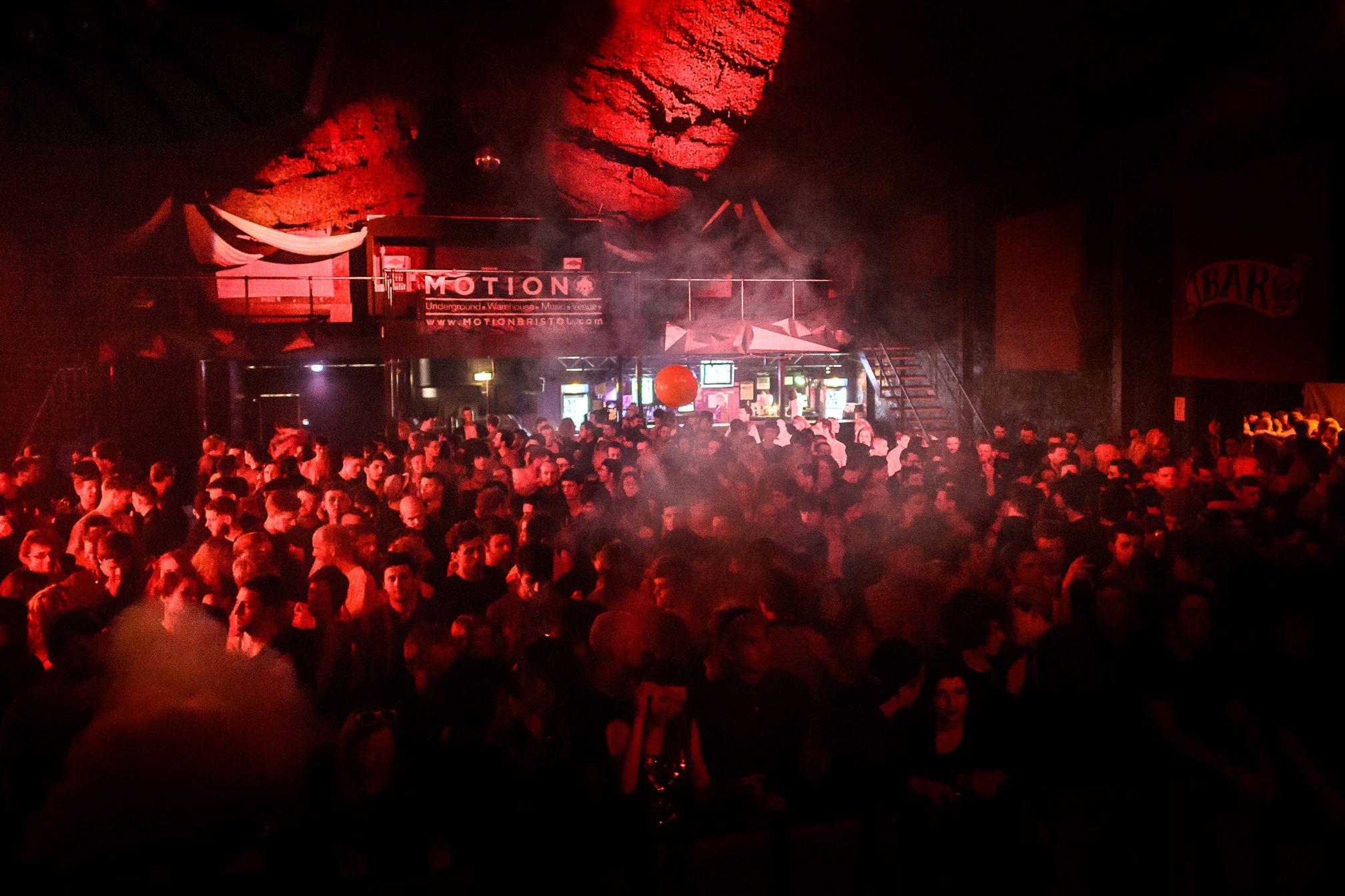 It’s one of the best raves going in the world. One of my favourite times was when me and Trigga warmed up for Method Man and Redman. I love the guys for that. They went out on a limb to book us. They knew Method Man and Redman would smash it up, so they wanted some DJs who’d bring that energy too. I’ve seen loads of rap shows but most of them aren’t very good. They stand around with their mates on stage. But this? It was a proper show. Real performers. That was a blessing warming up for that.

There are only a few venues we have played in every room as our parties have slowly got bigger over the years. Motion is one of them and we’ve even hosted our own Leng & M8s shows there, too. It means so much to have the support of the promoters and owners there since the start. We still go raving there as often as possible – that will never change. Whenever the club comes up in conversation we always look at each other and mention how sick the vibe and energy is there. In terms of stand-out memories, we always remember the Love Saves The Days afterparty. A long day of travelling, two shows and then on to the third which was around 4 or 5am in the Motion main room. Just when you think you’re getting tired and the energy is dropping, the Bristol crowd give you a huge welcome and you’re back again. You don’t get that kind of response in many other cities. 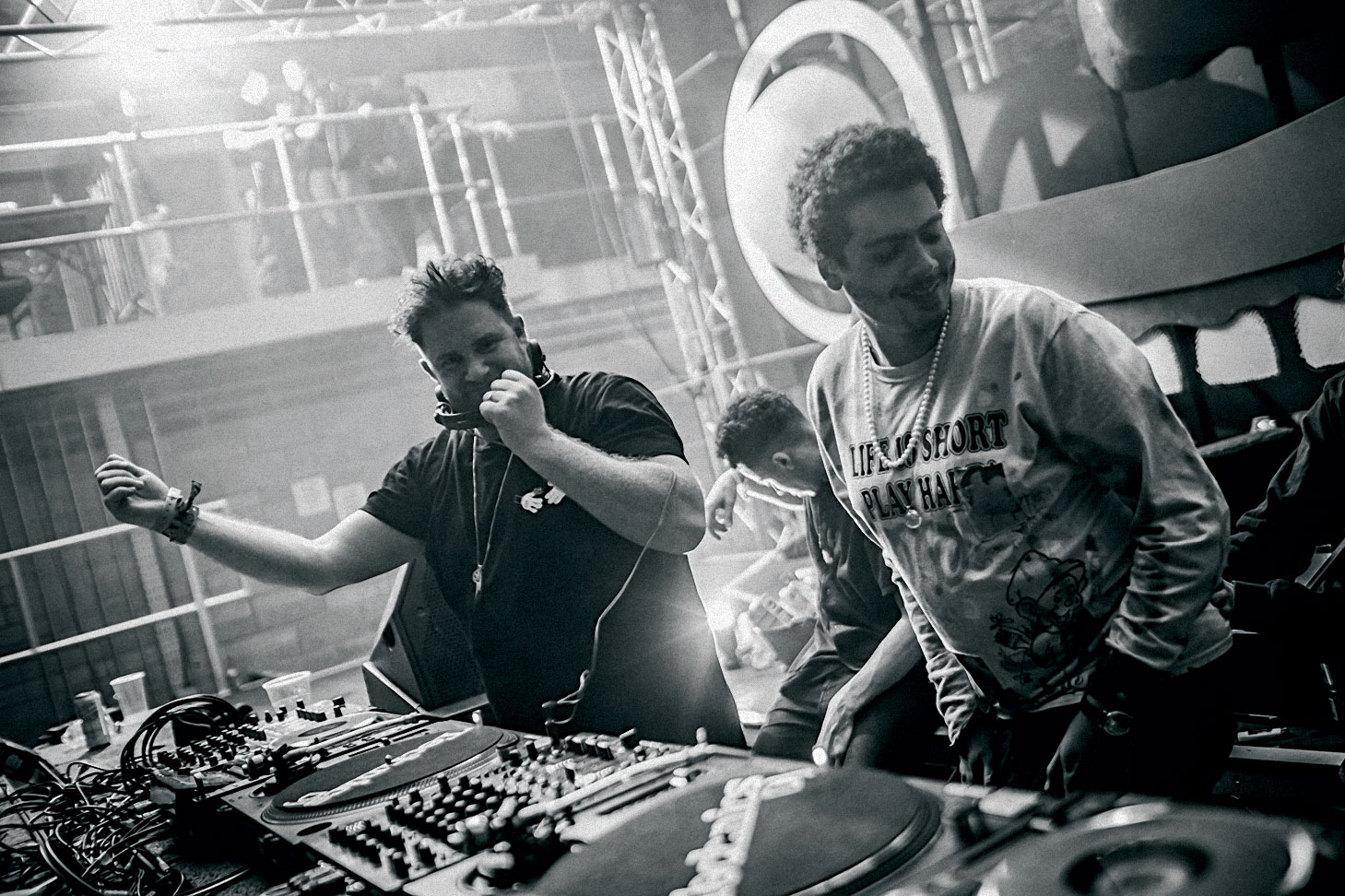 Motion is a very special place for me, and if there’s one particular memory that I’ll never forget it’s when I did my first Essential Mix live from there in November 2011. It was mental for several reasons: my first big single ‘Entrance Song’ had only been out for about four months, it was on a really mad line-up with Calvin Harris and Pete Tong, and the whole crowd stayed with me right to the end of the mix. You can hear my mates whooping and cheering from the front! It was a real high; doing an Essential Mix live in my home city, in my favourite club with all my mates – and all within the first few months of my first proper release. How mad is that? And it wouldn’t have happened if it wasn’t for Motion being the club it is.

I basically work here because my friend once had a crush on Seth Troxler! He was playing Motion and we knew he was playing Mulletover in London later. So my friend wrote on her chest ‘Take me to London’. Seth saw it and we met him outside but he only had two spaces in his car… and there were three of us. He suggested me and my mate played rock-paper-scissors for the extra space. I lost. But as Seth left, he told Rag, ‘look after this guy’. We got talking and I asked about afterparties because it was a few hours until my train home, and he and his mates just took me under their wing. I stayed with them partying all day – my friends went to London and came back and I was still there at this afterparty! A year later, Rag offered me a job. If it wasn’t for Seth and that game of rock-paper-scissors I wouldn’t be working here. 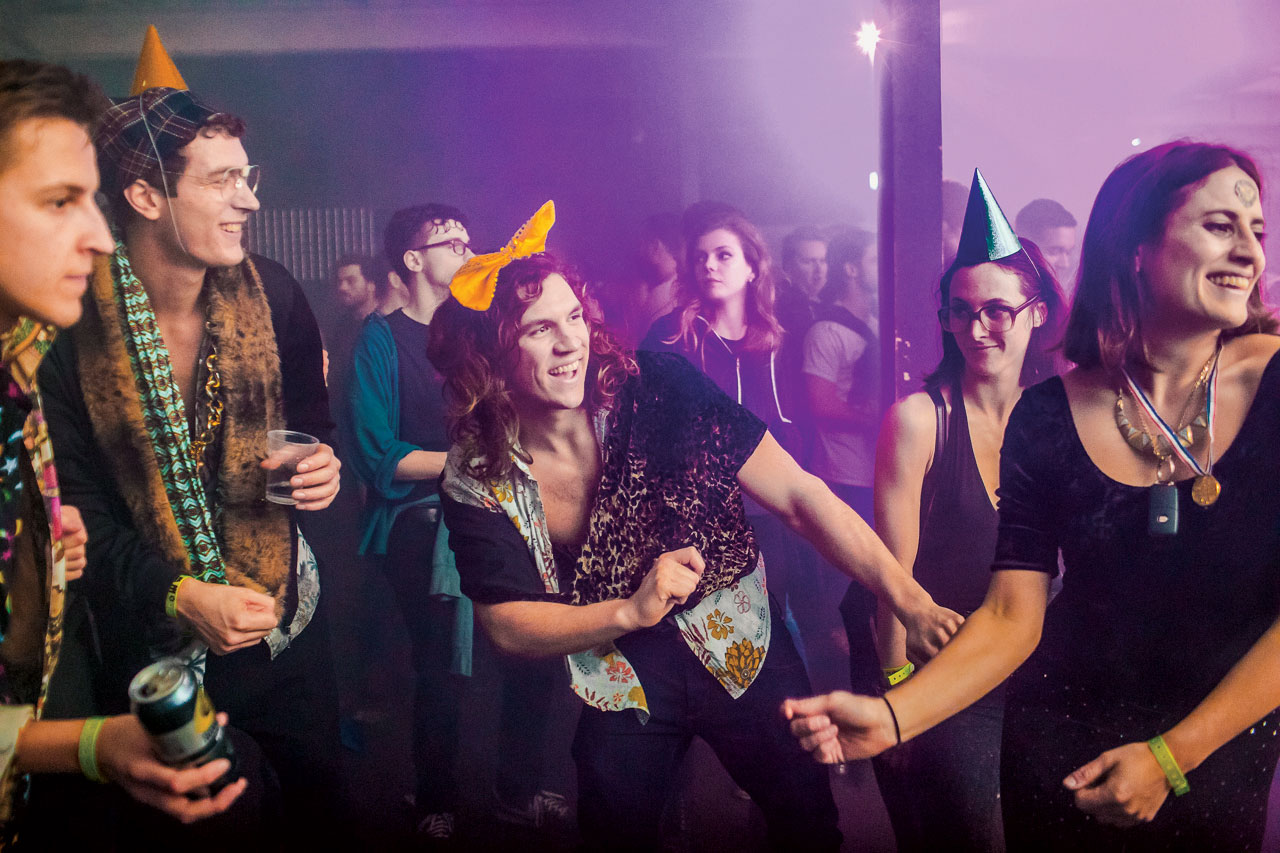 The minute a show is over, we’re already setting up for something completely different. I actually like the ludicrous timeframes; there’s a beautiful pressure when you’re hosting, for example, a cheese festival in the afternoon then have to clear the building and set it up for a rave in an hour. Opening up the new warehouse recently was one of the most intense days we’ve ever had at the club. Welding was still going on an hour before the doors opened, and when The Chemical Brothers arrived to sound-check, the place still resembled a building site. They were confident we’d get it done, though – they could see it was under control and organised. That’s how the event industry works. No-one in the crowd realises how much hard work has gone into it behind the scenes, and why should they? It’s their night off, and they’re spending their hard-earned money for the best night out. That’s what we give them.

In a lot of other clubs of this size the crowd are just anonymous faces. But Motion’s different. It’s got its regulars. Even those who travel from around the country become regulars. They’re always friendly, never any trouble, very easy going. We’ve even hosted a wedding here. A couple who met here five years ago had such an attachment to the club they hosted their ceremony in the VIP room while the party was kicking off next door! At first I thought, ‘Oh no, what’s this going to be like?’ But it was great. All the families, lots of oldies all suited and booted and partying with the clubbers. It was very surreal and a really nice moment for Motion to share.

Head to the Motion website for a full listings guide, here

Dave Jenkins is a freelance journalist and regular contributor to Mixmag