What have 10 years of Calvin Harris given us? An era of chart-topping EDM; newfound heights of DJ fame, complete with celebrity relationships; a seemingly never-ending slew of bangerz to please the masses in Ayia-flipping- Napa. It stands to reason then, that his widely slated debut album ‘I Created Disco’, released a decade ago this year, is seldom revisited with any great fervour.

Wind back the clock to 2007 and you’ll find a sorry time for dance music. During the halcyon days of the 1990s, many had predicted a commercial dominance for electronica after the turn of the millennium. This proved fanciful however, as veritable gods of popular dance music appeared to try their best to drive the genre into irrelevance.

Daft Punk, who had brought electronic music to bigger crowds than ever before, released the self-plagiarising ‘Human After All’ in 2005, filled with vaguely enjoyable songs that were really just knock-offs of their earlier work. Fatboy Slim was stuck in a generic loop, releasing two post-millennium albums that failed to recapture the magic of ‘Everybody Needs A 303’ and ‘Praise You’. Slim’s big-beat contemporaries The Chemical Brothers seemed similarly out of sorts with the woeful ‘We Are the Night’.

Even in less commercial realms dance was suffering. Aphex Twin was conspicuously quiet (and at the time denied that The Tuss was even him); Autechre had entered their ‘difficult’ period; and The Orb had become a parody of themselves with the tedious ‘The Dream’. And Calvin Harris, who emerged from this maelstrom of soulless dance music with his derivative pop tracks and chintzy music videos, was the epitome of it all, right?

But what if he wasn’t. What if ‘I Created Disco’, considered so naff it wouldn’t have made it onto Fame Academy, was not the apotheosis of electronica’s noughties malaise, but a reaction to it? Suspend your disbelief for a moment. Step into the world Harris created and see it through those bug-eyed goggles of his, and you might just be surprised by what you hear…

The most obvious discrepancy with Harris’s debut, and so the first thing reviewers jumped on, was its titular claim at having ‘Created Disco’. He didn’t. Obviously. However, what we hear on the album’s title track are the ramblings of a fictional producer-cum- mad-professor who did create disco. Perhaps it’s this persona that Harris occupies throughout the album, existing in a cartoonish electro world designed to satirise the dance music industry of the time.

Viewed like this, ‘Disco’ conveys a dazzling, psychedelic dystopia. If you accept the slightly disconcerting invitation on the album’s opener, you’ll find a world filled with drugs, girls and ‘80s nostalgia. ‘There was no sort of tune, no melody,’ Harris said to Fnac in 2008 about the dance music of the era: ‘it was just doing my head in.’ This is first embodied on second track ‘Colours’ by one of Harris’s many lovers, as the industry’s colourlessness is deplored by the artist’s — ahem — masterful lyricism (‘it’s all very well stepping out in black and white / But you’re no girlfriend of mine if you’re doing that right.’). 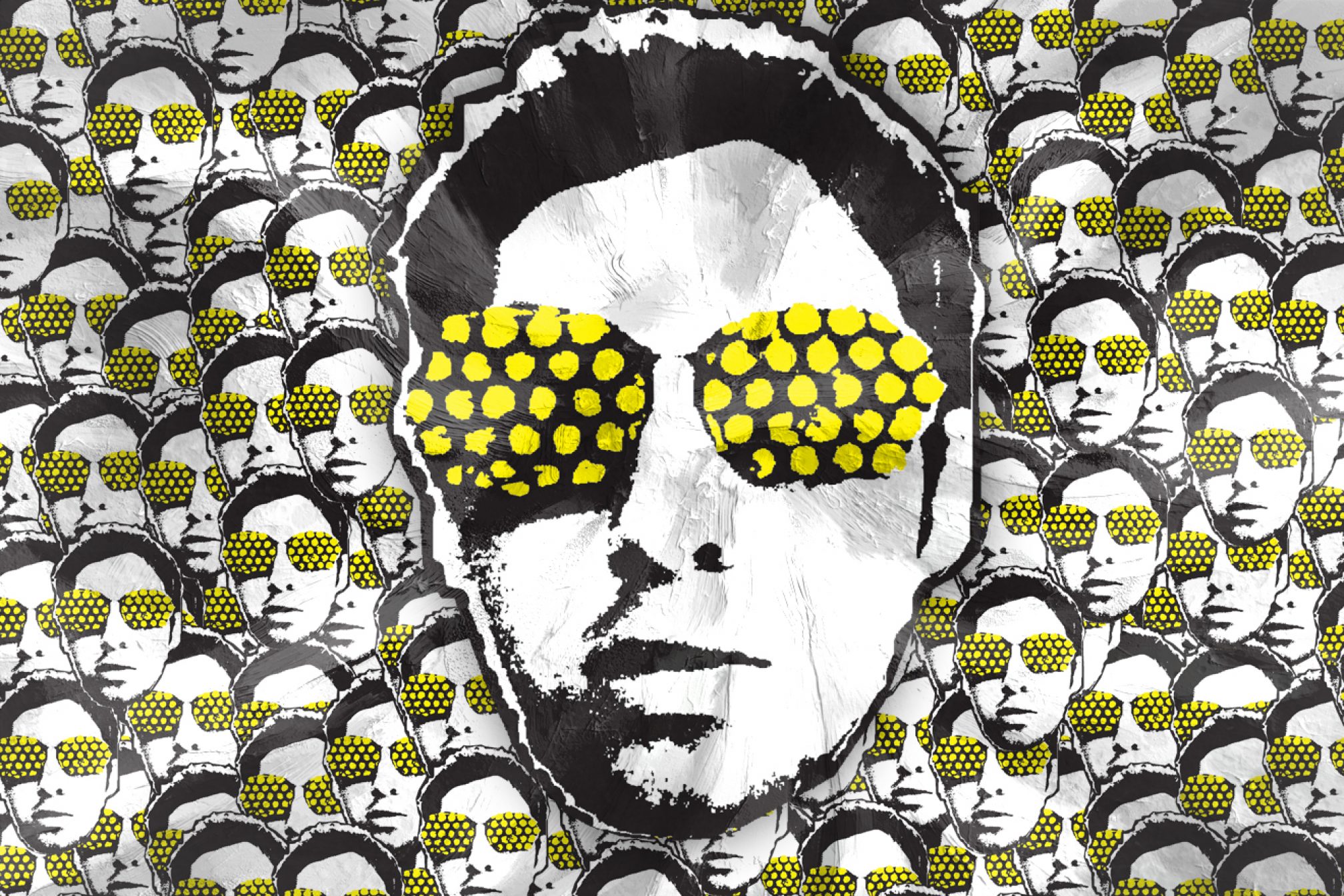 The next adventure on Harris’s magical mystery tour sees us encircled by a marching band of robotic industry clones, reminiscent of Willy Wonka’s oompa-loompas (‘This Is the Industry’). Later, our harebrained guide offers us some hallucinogenic space rocks (‘Neon Rocks’) and then channels Hunter S. Thompson with the reassuring refrain, ‘I’ve got my stuff and my drugs and my pills’ (‘Vegas’). Before that there was ‘Acceptable in the ‘80s’, the horribly catchy theme tune to this LSD-fuelled parade. All of this is, presumably, a metaphor for a homogenous industry that was drugged up on ecstasy and overly reliant on the 1980s.

And what about the sound? It seems strange today, when Harris is so often synonymous with bouncing arena-ready choruses, to recall an album that was produced entirely from a bedroom. The burbling 303s and breakbeat rhythms that run throughout ‘Disco’ were composed largely from 8-bit preset samples on Harris’s Amiga 1200 computer. Perhaps this goes some of the way to explaining the tacky aesthetic that was denounced by critics, but it also gives the album a certain home-made charm.

‘Acceptable in the ‘80s’ was always more likely to soundtrack adverts on CBBC than be blasted over fields in the balearics, but that makes it no less infectious. The album’s four instrumental cuts — a rarity on Harris’s feature-heavy LPs these days — might sound low-budget, but each of them evokes its own kaleidoscopic image, none more so than the lounge-ready swirl of ‘Love Souvenir’. Closer ‘Electro Man’ is not the crywanky schmalz-fest it first seems, but an eery cry for help from the album’s tortured protagonist, striving for emotion in a world where there is none. For me, it’s every bit the electro ballad of ‘Something About Us’ or ‘Someone Great’.

Of course there is an elephant in the room when it comes to noughties electronic music. In fact it’s less an elephant and more a fat guy in a t-shirt. Two of the best dance albums of the ‘00s weren’t dance albums at all, but indie rock albums, written by James Murphy as LCD Soundsystem. If you’ll cast your memories back to a further five years pre-‘Disco’, you’ll remember that Murphy predicted the arrival of DJs like Harris on ‘Losing My Edge’. Murphy feared ‘better looking people’ sporting ‘borrowed nostalgia from the unremembered ‘80s’. Come to think of it, ‘Merrymaking at My Place’ is quite similar to ‘Daft Punk is Playing at My House’…

While Harris has never achieved what Murphy has done with such consistency — critical acclaim, it’s well known that Murphy always wanted a number one album, something Harris has achieved twice (and counting). There’s a poeticism in that Murphy should realise his aspiration this year (‘American Dream’ reached the top of the US Billboard), on the 10th anniversary of ‘Disco’, an album which, on closer inspection, deserves rather more acclaim than it’s been given.