It’s another dismal February afternoon in downtown LA’s Skid Row. Home to one of the nation’s largest established homeless encampments—approximately 5,000 to 8,000 inhabitants—human apparitions wander the streets with zombie-like gaits, a forgotten community in a city known for opulence and glamour. All along the urine-soaked sidewalks is a potpourri of bedraggled tents and shanty shelters that span several blocks in every direction. Leftover pink and red paraphernalia still decorate the windows of nearby shops from Valentine’s Day a few days prior, a holiday that Skid Row could care less about.

Then, as if apparitions themselves, a plucky group of neo-hippies approach this community armed to the teeth with gifts and smiles. This is the Desert Hearts crew—a vibrantly dressed assemblage of house and techno-devotees known for their eponymous boutique festival which will take place April 27-30 in San Diego. On this temperate day in Skid Row, however, they are giving away much more than just good vibes and house beats.

“I live in downtown LA so I especially see the homeless epidemic and it’s devastating,” says Mikey Lion, who—along with his brother David Leon (Porky), Lee Reynolds, Matt Marabella (Marbs) and Ryan Orey (Deep Jesus)—co-founded Desert Hearts Festival in 2011. “A lot of homeless people just want to have a conversation, to be recognized. They feel so neglected and the ethos of Desert Hearts is to spread as much love and positive energy in the world as possible so we started kicking around ideas of what we could actually do to help them.” 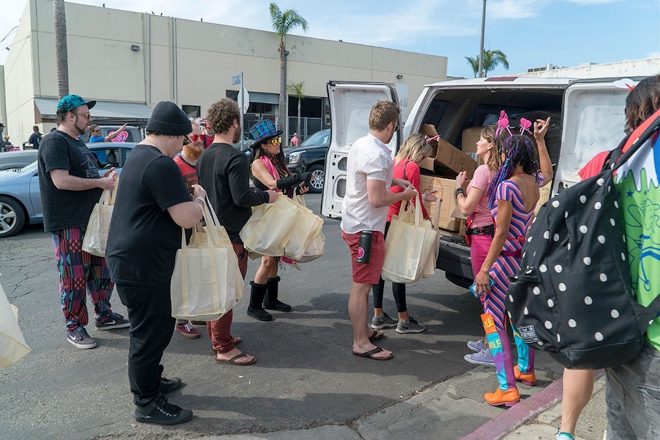 Taking their ethos from the desert to the streets, Desert Hearts has evolved into more of a movement than a festival. What began as a bunch of dudes throwing a renegade party in the desert has since erupted into a global brand complete with merch and record label. As they absorbed every fan they encountered into their psychedelic family, Desert Hearts quickly ballooned into a Timothy Leary fever dream soundtracked by the omnipresent pulse of bass and high-hat. The fact that this year tickets to Desert Hearts sold out before the lineup was announced is a testament to their loyal fanbase.

“We’re reliving this whole psychedelic love movement of the 60s with festival culture today,” Lion says. “I think the original movement failed because it lacked organization and they didn’t have the proper tools—like social media—but we do have those tools so we can be the voice that leads the next generation to positive change.”

Meanwhile, in a parallel but sometimes intersecting universe, Los Angeles-based Elizabeth Devin—a friend of the DH crew and prominent member of the Burning Man camp, Savage Hearts—had begun a program in 2013 called the Helping Hearts Love Ride. When the Desert Hearts team caught wind of Devin’s initiative, they joined forces. Both crews having the word ‘hearts’ in their names made it an all-too-fortuitous merger. “Love Ride is my baby,” Devin tells me. “I started it with the support of friends five years ago—taking care packages to those experiencing homelessness in my area. Desert Hearts donated this year and is helping to make my dream of Love Rides [happening] everywhere become a reality.”

After eliminating their autumn festival, (Desert Hearts used to be biannual) the crew developed the City Hearts tour which shared their “house, techno and love” gospel with as many American cities as possible. Having built their empire of love all over the US, they now have the ideal platform to begin adding Love Rides to various tour dates. The first new iteration of Helping Hearts (Desert Hearts + Savage Hearts) took place earlier this year in celebration of Valentine’s Day.

Despite famously out-partying anyone who dare contend with them, the DH crew diligently took time from their undoubtedly raucous week in Los Angeles during their City Hearts tour to hand out 600 care packages—containing an assortment of hygienic products like soap, razors, and feminine products—to the homeless in Venice Beach. The following weekend they handed out 600 more so-called “love bags” in Skid Row, and 400 the weekend after that in San Francisco. These bags were paid for and put together by the Helping Hearts themselves; Lion even keeps a cache of love bags at home, integrating this gesture into his daily life. “We’ve always been the leaders of our community—whether it’s on the dancefloor or on stage or showing people a new way to party,” says Lion. “That’s why it’s important we personally hand these bags out. We’re smack in the middle of it ‘cause we want to lead by example; we want to show people that they can do it too.”

The Desert Hearts gospel is now being sung beyond their Southern California epicenter. Denver is the next scheduled location for their Love Ride initiative taking place on June 21 ahead of their June 22 City Hearts show—they have already connected with local homeless shelters and the love bag assembly is underway.

While there are many music festivals that preach love or donate portions of ticket sales to philanthropic endeavors (which DH also did for the homeless back in November 2017), this sequin-encrusted, top hat-wearing crew is reaching out with their own hands to those in need. Love is not just the Desert Hearts’ brand, it’s their dogma.

“Desert Hearts and what we’re doing is so much bigger than dance music,” Lion says emphatically. “It is about the music but for us it’s always been about the vibe first. It’s trying to create that social change; it’s trying to create that awareness that we are all one, we are all in this together. We shouldn’t be divided because love is what the world needs more than anything right now.”