Everyone has a past that’s at odds with their present. Punk icons now sell you low cholesterol butter, and nobody but Morrissey likes Morrissey anymore. Trends come and go, people change and the world keeps turning.

Music scenes ebb and flow, they become hyperbolic in an instant and then the bubble bursts equally as quickly. A life’s work can be simmered down to “where are they now?!” talking points in the pub five years down the line; teenage years spent locked away in a family bedroom studio amounting to “oh yeah” moments while unearthing a second-generation iPod mini.

“There’s a remixer of the year, or the month, and then everything switches. It just happens y’know, the scenes change,” says Joshua Harvey. I ask him about his experiences in music over the past 10 years. He answers as if he’s had to address the question countless of times, but as The Count & Sinden, Voodoo Chilli, Action Man, Boo Shaka, Hervé, or one of his many other guises, 2006-2011 were Harvey’s years.

As recently as 2015 Hervé was still making Beepers under Diplo’s Mad Decent imprint, enlisting Zebra Katz for ‘Tear The House Up’. Kelly Lee Owens, Steve Mason and Meridian Dan are all found on his 2016 LP ‘Hallucinated Surf’ too. Today though, his outlook is different with a music career behind him. He likes to be in front of a crowd, but only under his own terms. Music industry clichés are 100 per cent true, dance music hangers on are a baffling phenomena and of course, music today isn’t like it used to be. “Oh, you mean when you were young? What a surprise,” he admits with complete self-awareness. “But in the beginning when you’re seriously broke, you’re looking forward. Everything is possible, you wake up thinking, ‘Today, I can make something that will change my life.’ Everyday I woke up thinking that, and it powered me through.”

Do you not wake up thinking that now, I ask. Has that person been lost? “Yes, if I’m honest. I’m a different person in many ways – I loved that person though,” he says, in a noticeably more pensive tone. “I woke up every morning, looked at my crap computer and battered keyboard and thought ‘I can make something’. Once you’ve done that, and in a way that was so beyond all your expectations, how can you ever achieve that again? You need a seismic shift to do that again.” 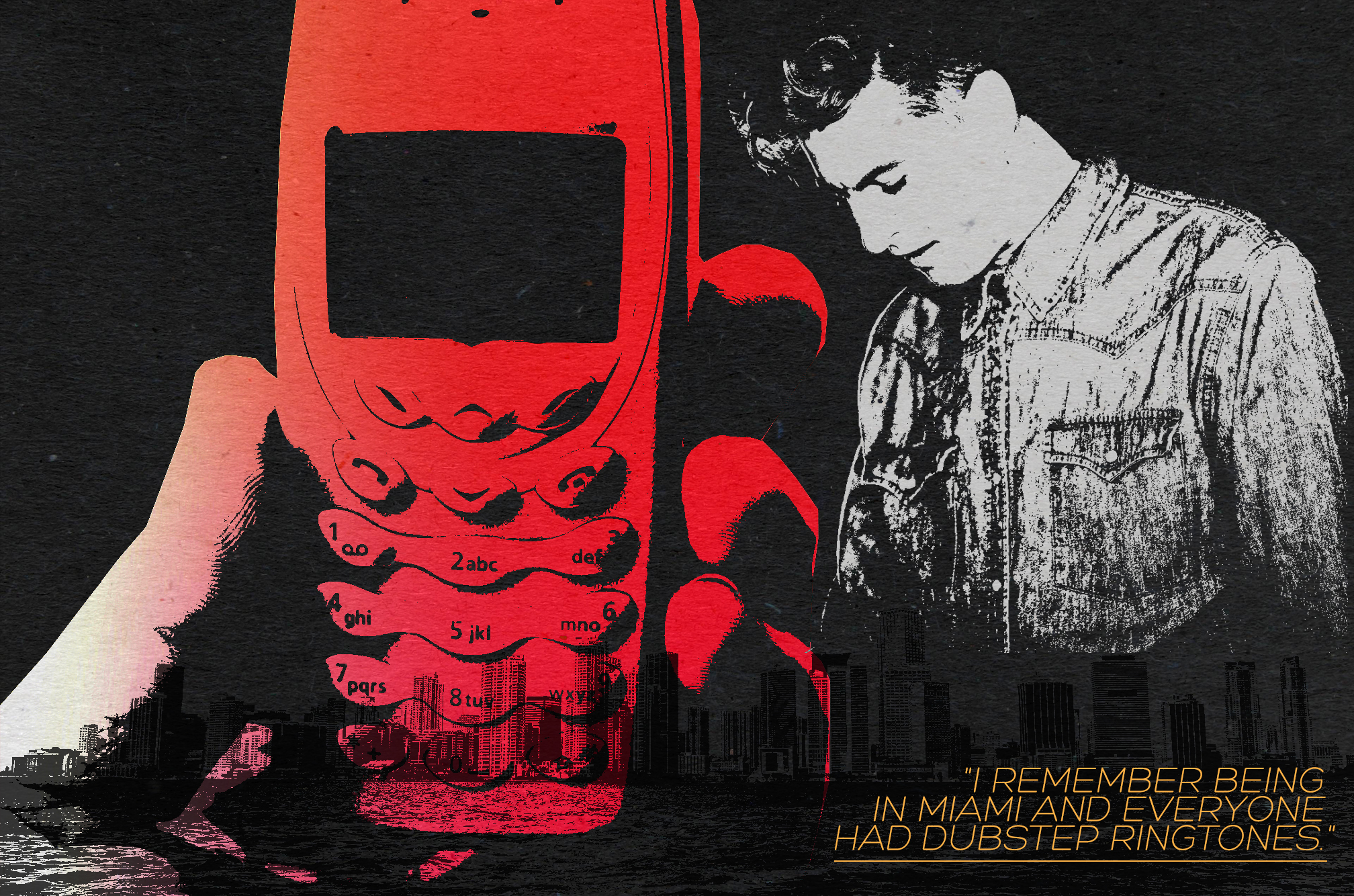 “For us, dubstep started in 2001/02, but it peaked really quickly which was the problem,” says Skream. “It was very much a UK thing in the beginning, a melting pot of different scenes, but as it grew it lost its original identity. I remember being in Miami and everyone had dubstep ringtones. It ended up becoming more relevant to that than anything we did.”

In 2013 Skream reportedly pronounced “Dubstep is DEAD”, according to the headline of a Daily Star interview. He understandably ruffled a few feathers at the time, despite the statement being completely false tabloid fodder. “It caused such a stir that it delayed everything I had been working towards,” he said. Until that moment his transition to a four-to-the-floor mainstay was gradual. A techno set here, a sparse house record there. “My family, my best mates, they all knew that I didn’t say that, but after that everything seemed to be this massive change. For me, the change was slowly happening over a number of years. What was most upsetting about it was that comment took away some of the hard work everyone was putting in. It put a real negativity on the music, it became a question of ‘Is it dead, or is it not?’”

“Every scene gets to a point where it becomes boring because everyone’s doing it,” says Matt ‘RacknRuin’ Robson-Scott. Alongside Kye ‘Foamo’ Gibbons, the pair make up Gorgon City, but as Foamo and RacknRuin they began as the British division of the mid-2000s bloghouse boom. “When scenes begin to change and things shift you can’t think, ‘Ah shit, I have to stop making this’, but it needs to be a natural thing,” says Robson-Scott. “You want to make stuff that excites who you’re playing to, and you subconsciously start to make something that sounds fresh.”

While going through shared creative blocks that lasted longer than they’d care to think about, Gorgon City began as a side project while they both mulled over the next steps for their solo monikers. “At that time I wasn’t getting that many gigs as Foamo, and I asked myself, ‘Should I spend my time on this side project that has no interest, or should I revive my own career?’” says Gibbons. The decision to form Gorgon City wasn’t easy. Gibbons parted ways with his long-running former manager when the deal was done. “I lost quite a few sleepless nights making that choice,” he says. “But having a second career was a real blessing. It’s a delicate scene, and it can go badly really quickly. That can be quite a dark place, but I’m glad I’ve experienced that in my career so you don’t take for granted when it is going good.” 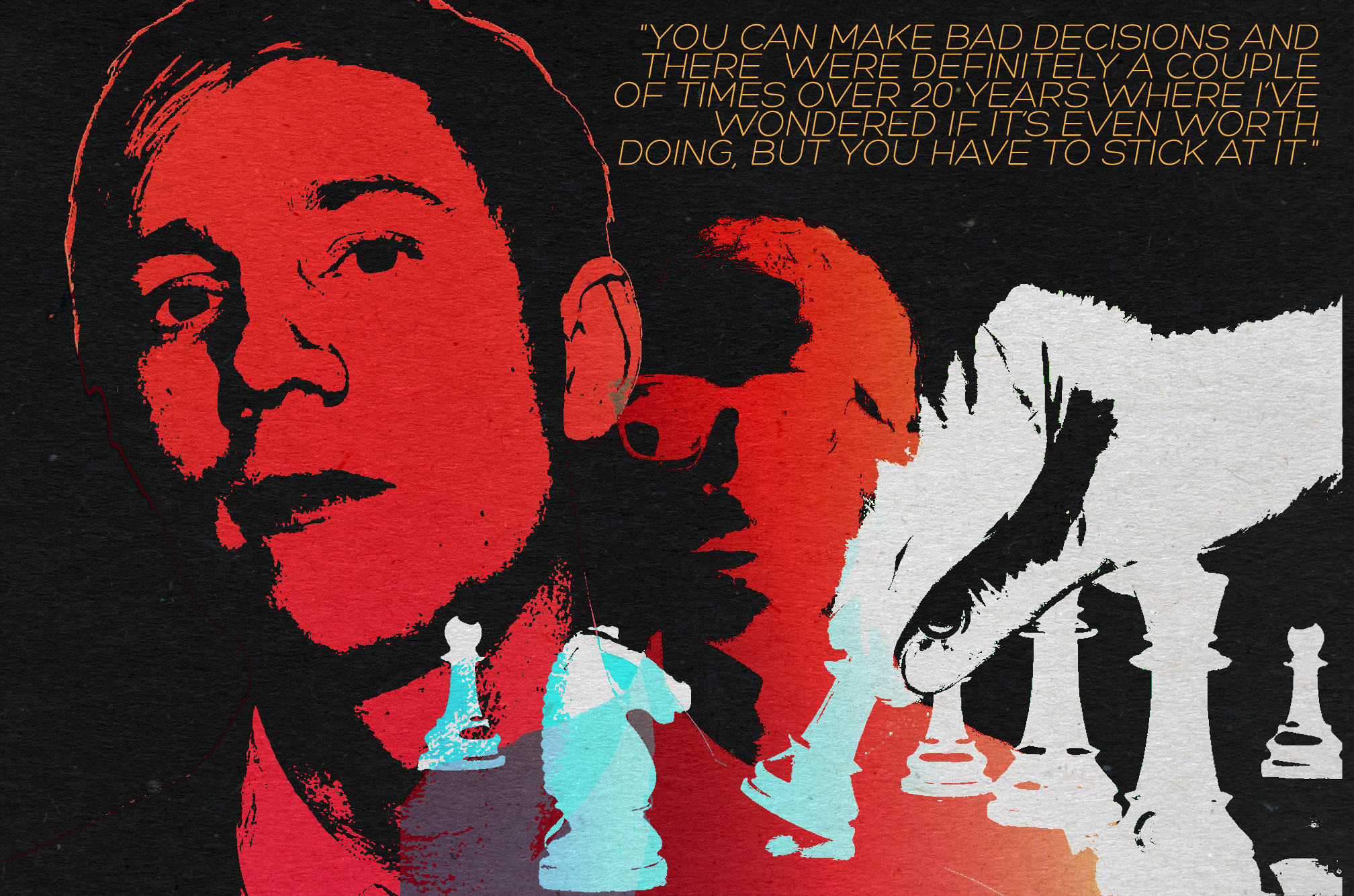 Riton has seen a few trends come and go throughout his 20+ year career, too. ‘Rinse & Repeat’ may be his mainstream breakout, but his career spans 20 years. On his second LP ‘Homies and Homos’ he flirted with electroclash, a maligned genre with the image of a new romantic without a sense of irony. During the 2006/07 indie dance glory years Riton hooked up with Ed Banger, the label for club kids who couldn’t dance but enjoyed songs that told them to try.

Riton remains one of the label’s key players today. “I started doing shows with Justice in the early 2000s and everything melded together into that electro sound. It was more unique what the Ed Banger guys were doing, but I always felt like I was housier than the rest of them. It was their own thing, but I was coming to it from the club side with my tunes,” he says.

That, according to Riton, is what he thinks has helped keep him here today. “It’s not a great place to be, being a musician and skint,” he says. “It goes up and down, and when it’s down, sometimes you wonder how you’re going to get out of it. You can make bad decisions, and there were definitely a couple of times over 20 years where I’ve wondered if it’s even worth doing anymore, but you have to stick at it. Thankfully I did and I think I’m doing OK now.”

In 2006 Riton was opening up shows for Anna-Catherine Hartley aka Uffie. “‘Pop The Glock’ was the first song I ever wrote,” says Hartley. MySpace ensured it went global in a matter of weeks. “Looking in the rear view, it does feel like everything happened pretty instantaneously following that release.”

Uffie preempted today’s pop landscape. ‘Hot Chick’ was electro’s ‘Vroom Vroom’ with an Aphex twist, and her 2010 debut ‘Sex Dreams And Denim Jeans’ glistened with PC Music pop futurism (phony British accents and all). Music editors loved her as much as fashion labels did, but then, at least to the teens who left her music behind as they attempted adulthood, she was gone, retiring the Uffie name in 2013. “I was never driven by fame or money, so it was pretty easy for me to say that ‘this has led me to a place I don't like as a human, let’s take a step back’’ she explains. It’s important to note here too that in its history, Uffie is the only female signing to the Ed Banger imprint. “I'd been recording through the pregnancy of my second child, I had just lost my mother and I was broaching my mid 20s. I wanted to breathe. So I said, ‘Fuck it’ and retired publicly.”

Of course, ‘retirements’ are malleable titles in music and for Uffie a soon-to-be-released mixtape charts her return. “When your sound is very linked to a point in music, it’s very hard to separate it, make something fresh and have people accept that when they know you for one thing,” she says. “But ‘Uffie’ doesn't make sense in popular music today as it exists today. Anyway, I'm surrounded by very different things now. I’m aware of others, and about time. I'm 29, not 19. my views have grown. I'll always cherish not giving a fuck, but it'd be pretty sad if I hadn't found a new way to do so in a decade.” 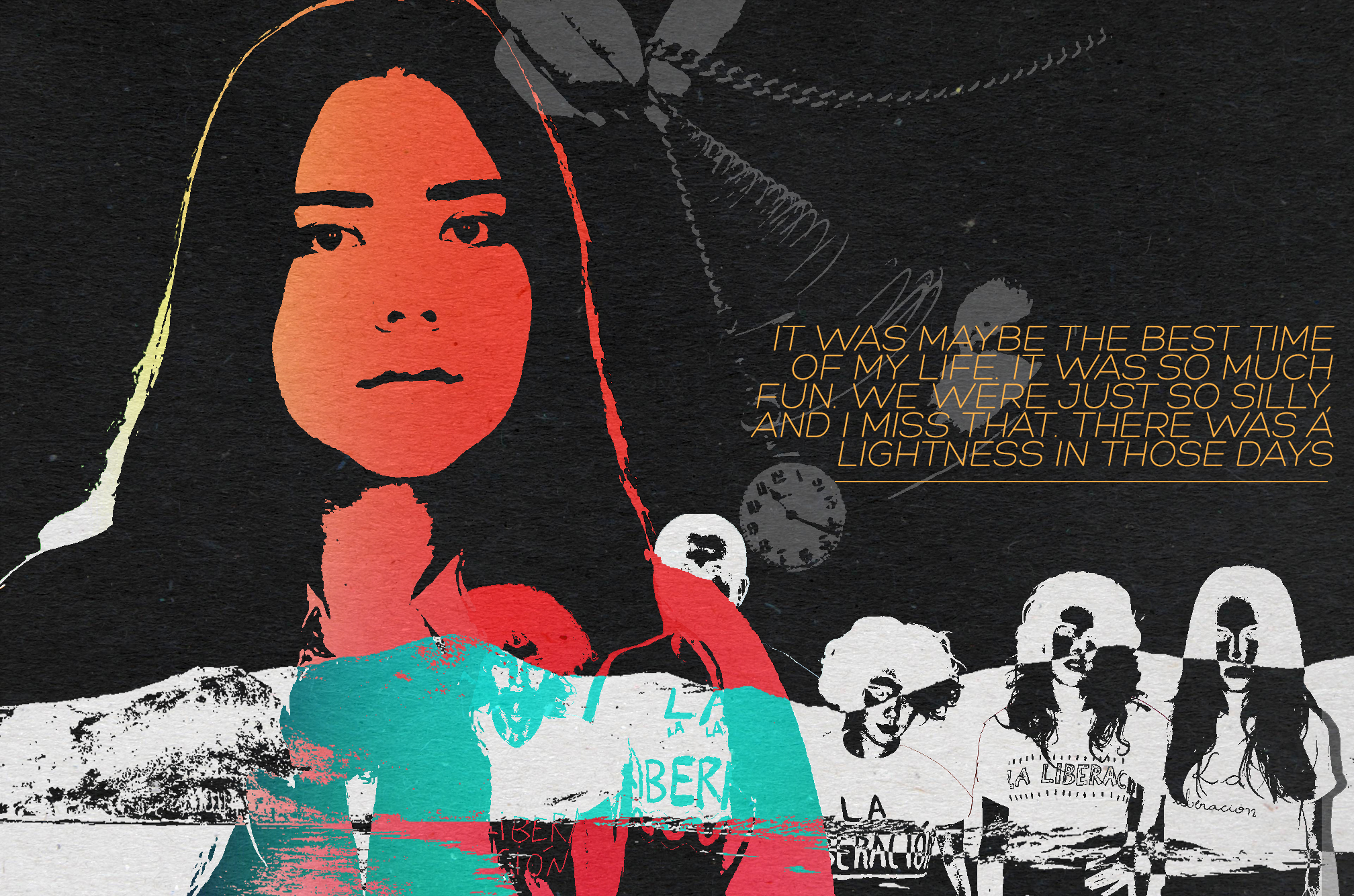 While Uffie was popping glocks Cansei De Ser Sexy, or CSS, were urging teenage NME readers to make love and listen to Death From Above. Fronted by the leotard-clad Luísa Matsushita, aka Lovefoxxx to most, CSS broke through at a time when greasy side fringes were acceptable looks and Does It Offend You, Yeah? was a plausible band name. CSS were flagbearers of nu rave, and my twelve-year-old passport photo comes from being a fan of it. “A band only ceases to exist when they declare it, and we will never do this,” says Lovefoxxx. The last CSS show took place in China in June 2013, almost exactly ten years since they formed, yet it may not exactly be their ‘last’ show. “The band will always be alive, even if we never do anything more.”

As far as lifestyle changes go Lovefoxxx now resides in a completely different universe to the world she once inhabited; a time of glow sticks and political opinions formed solely by ‘Drop Beats Not Bombs’ T-shirts. In 2015 she spent a month building earthships in developing areas of Argentina, an experience “more powerful than 10 years of touring on the road.” She became a qualified hypnotherapist in 2013, and in April of this year bid farewell to her city of São Paulo and moved to the island of Florianopolis, found about a 9-hour drive away from the place she called home for 17 years. “Wherever you look you can see a green mountain,” she tells me. I can hear the tropical birds in her garden through the phone, and our conversation is later cut off after her cat begins mauling one of them. “After we paused the band I prioritised quality of life, I want to live a free life. That’s what I’m working on.”

But how does she look back on her time in CSS? “Oh my god, it was the biggest present I’ve ever been given. A gift from life. There are no regrets.” She pauses, her voice beginning to choke up a little. “It was maybe the best time of my life. It was so much fun. We were just so silly, and I miss that. There was a lightness in those days, but it just comes from the age and the time. Things are different now, it’s a different kind of scenario.”

When you’re enjoying the fruits of being flavour of the month it’s understandable to think global success can last forever in an industry where, for most, it doesn’t. But within the dance music bubble where careers can be lost in a poorly executed PR campaign or thanks to a journalist who doesn’t ‘get it’, there’s equal reason to leave it behind. But so many artists persevere regardless. “Music is the only thing I do,” says Skream.”It’s the only thing I can do really.”