Damon Albarn has described the latest Gorillaz album as the soundtrack to the party before the end of the world, but there’s definitely more of a feeling of optimism in Margate today. It’s two days after Britain went to the ballot box and despite a result that once again showed the country isn’t really sure what it wants, the outcome seems to have given lots of people (most notably the young) a glimmer of hope, and there’s something in the air. In Margate, a party atmosphere floods the town. Bike taxis courier up and down the seafront pumping out Gorillaz’ back catalogue while visitors dressed as Murdock and 2D from the cartoon band mingle on the streets with local kids pulling wheelies.

Margate’s the kind of quintessentially English town that has long fascinated Albarn, and you can only imagine his delight at bringing a bunch of US hip hop stars to a place where you’re usually more likely to catch Chas ’N’ Dave or Lulu at the nearby Winter Gardens. Taking place at Dreamland, a refurbished theme park that has already held events by the likes of Bugged Out! and gigs from Foals and Super Furry Animals, the production is by Block 9 of NYC Downlow fame. Getting people to ‘put their phones down and reconnect’ is an aim of the design says Block 9’s Gallagher. “The ‘Humanz’ album has a theme running through it about human beings digital nature,” he explains. “As opposed to twenty years ago, now we all have this digital side to us. That’s the narrative running through a lot of their new music, so we took that as a starting point for the festival.” 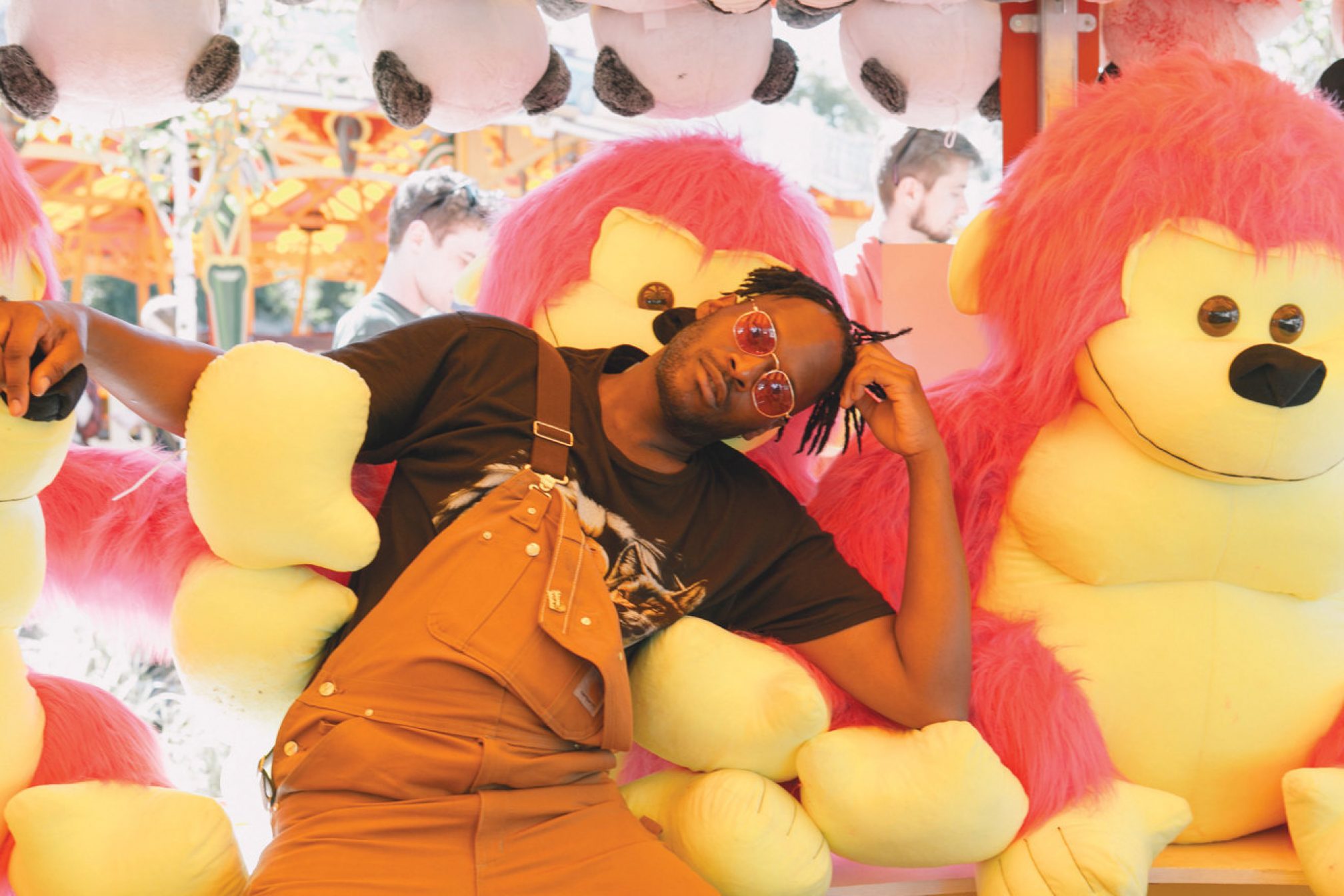 And they’ve certainly provided plenty to prevent you from reaching into your pocket for the digital world, though the whole day is very Instagrammable. Alongside the waltzers, dodgems and mirror maze there are sets from De La Soul, Danny Brown and Kelela. In the indoor Hall By The Sea Kali Uchis holds a decent sized crowd with a sultry cover of Al Green’s ‘Let’s Stay Together’. But, on a day tailor-made for deckchairs and ice cream cones, it’s clear that most of the crowd want to be outside, or more specifically, parked in front of the main stage to watch De La Soul whip the crowd up with a set heavy on audience interaction, if low on fan favourites from ‘3 Feet High and Rising’. After a slightly divisive set from Vince Staples, Kano brings a bucket and spade-load of crowd-pleasing charisma to proceedings before anticipation swiftly turns towards the main act.

Gorillaz have always struggled to work out exactly how to marry their real life selves with their animated alter egos on stage. On their first live forays they played behind animated screens, while at Glastonbury 2010, Albarn’s refusal to be frontman created a disconnect between what was happening on stage and the people in the crowd. All has been resolved on that front, though. A group of cloaked figures arrive on stage, soon revealed as Albarn and co, and he leads his musicians through a frenzied opening trio of ‘Ascension’, ‘Last living Souls’ and ‘Saturnz Barz’. Peven Everett joins to play Bobby Womack’s part on ‘Stylo’, the late singer’s image appearing on screen in tribute, before De La Soul return for ‘Momentz’ from the new album. Albarn alternates between manically jumping around on the edge of the stage (in the past, he spent most of the set at the piano) and addressing the crowd about current events. 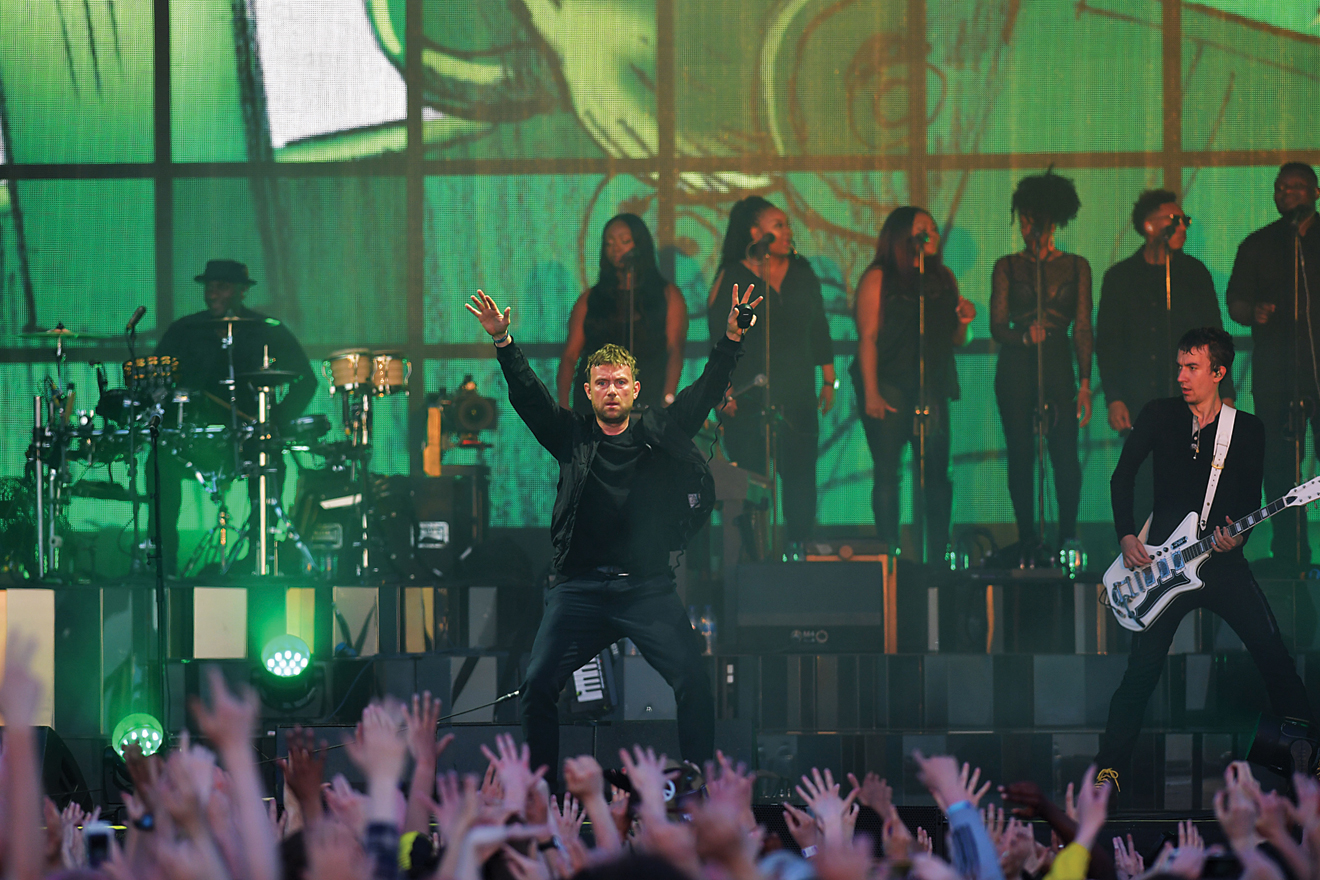 At times, it’s hard to keep track of who’s on stage at a Gorillaz show, with everyone from Kelela, Danny Brown and Zebra Katz appearing at some point and bringing a non-stop carnivalesque feel to the set. But it’s when Shaun Ryder pops out for ‘Dare’ just before the encore, and De La Soul rejoin for ‘Feel Good Inc’, that the crowd really lose it. The world hasn’t quite come to an end – in fact, the party’s still going.