Racing the sun through citrus and avocado groves, we begin a winding ascent up the Palomar Mountain range to the La Jolla reservation in order to catch the first evening of Dusk Camp, Southern California’s newest boutique music festival. These lands were first settled by a Native American tribe known as the Luiseño, whose mythical ancestor, founder and “father of all things”, Wiyot, rose from the dead to transform into the moon – and right now a full, heavy blue moon is rising above the mountainside on its own climb to the heavens.

On site a clear, cool stream snakes through the narrow grounds, banks dotted with tents belonging to the festival’s few hundred attendees. A dimly lit bridge leads us into the event’s single staging area where high-powered lasers lick the hillside behind us and a handful of revellers are getting acquainted around a campfire next to the dancefloor. The turnout feels slim and scattered at first, and bring to mind painfully awkward, pre-teen dances at sleepaway camp, but these concerns are soon whisked away as the dusty dancefloor starts to fill up with eager, first-night-fresh dancers

Dusk Camp was founded by three veterans of LA’s underground scene, Hedi Lawden, Masha and Jeniluv, and the line-up for this first event features a mix of heavy-hitting international talent and LA selectors starting to make a name: Dirty Dave, Cooper Saver and Mesmé sharing the stage with the likes of DJ Nobu, Jennifer Cardini and DJ Harvey. The policy of spotlighting local talent is a deliberate one. “The idea of elevating LA DJs who previously or currently are not really getting the shine that they deserve is really important to us,” says Masha. “We decided that the best way to achieve this was by undertaking the craziest project of our lives: throwing a festival.” 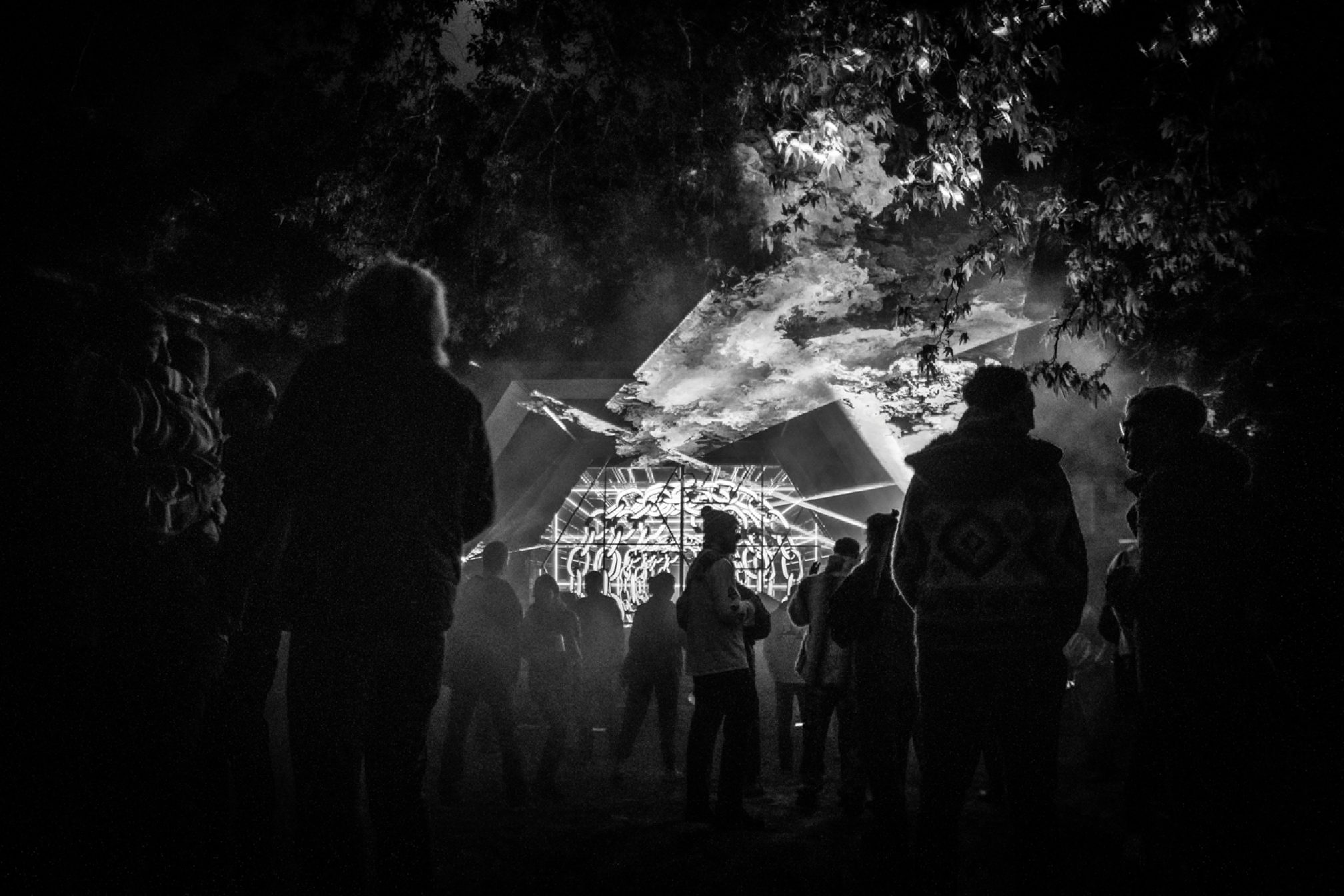 Sipping on free rosé, a vibrant, pink-cheeked crowd filters in and gathers around the geometrically sacred ‘love vortex’ stage for German artist Perel’s striking hybrid set. She whips through Portuguese disco, EBM and some fantastic live singing before NYC duo Analog Soul’s three-hour set of breakneck acid bangers and crowd-pleasers like Charlie’s ‘Spacer Women’. After that, DJ Nobu leads an assault of precise house that blasts through the valley until sun-up. “Finding interesting music is easy,” we overhear one reveller saying to another at 7:AM, as Conor and Solar to score the sunrise with a special B2B set; “it’s the right vibe that’s as rare as a snow leopard.” It’s an impressive display of talent and California love that concludes with ‘Hallelujah’ by Happy Mondays, setting the tone for the sunny, day-long disco affair that is about to transpire.

Daytime at Dusk Camp on Saturday is less about dancing and more about enjoying the company and surrounding nature. There are people meditating on large boulders, splashing around in the bubbling stream and relaxing near the stage while ever so often jumping up to get a few dance moves in before lazily slinking back to the ground. Rumours of bad weather incoming begin to spread across the grounds as we make our way back from the campsite to the stage, a frog leaping across the dark ground and startling us half to death. According to the Luiseño tribe, it was an envious, poisonous frog that killed their mythical ancestor Wiyot and sent him into the sky. A look upward and we see that our full moon has disappeared. A slight drizzle begins to set in. Bad omen.

As Jennifer Cardini digs out fine-tuned Acid Arab tracks and grooves like Metro Area’s ‘Miura’, a light rain starts to fall through the wide-sweeping lasers and lights up the sky with what looks like a supernatural blanket of glitter above the dancefloor, making up for the lack of stars in the sky. At 3:00AM, a downpour settles in as DJ Harvey steps up to the decks at and blasts out Meat Beat Manifesto’s ‘Radio Babylon’. Many retreat, but the committed and prepared fully surrender to the elements and lock in for his six-hour set. “At that moment, it really felt like some kind of Babylon,” says co-founder Hedi Lawden afterwards. “It was a catastrophic yet amazing situation. Being English, the last thing I wanted was a festival in the rain and the mud, but it added an extra magical element that made the people from LA go beyond themselves and what they’re normally used to.”

It’s all hands on deck, and everyone is happy to lend a hand. The crowd leaps into action to move furniture, cover the speakers and stake down a semi-circular tent that gives some respite from the rain. One individual brings his personal camping heater into the tent so people can be a little bit warmer. It’s a test of dancefloor endurance that lasts throughout the night and into the damp morning, which dawns to reveal soaked ravers, most of whom are ready to throw in the towel and get themselves home in time for the Game Of Thrones finale. 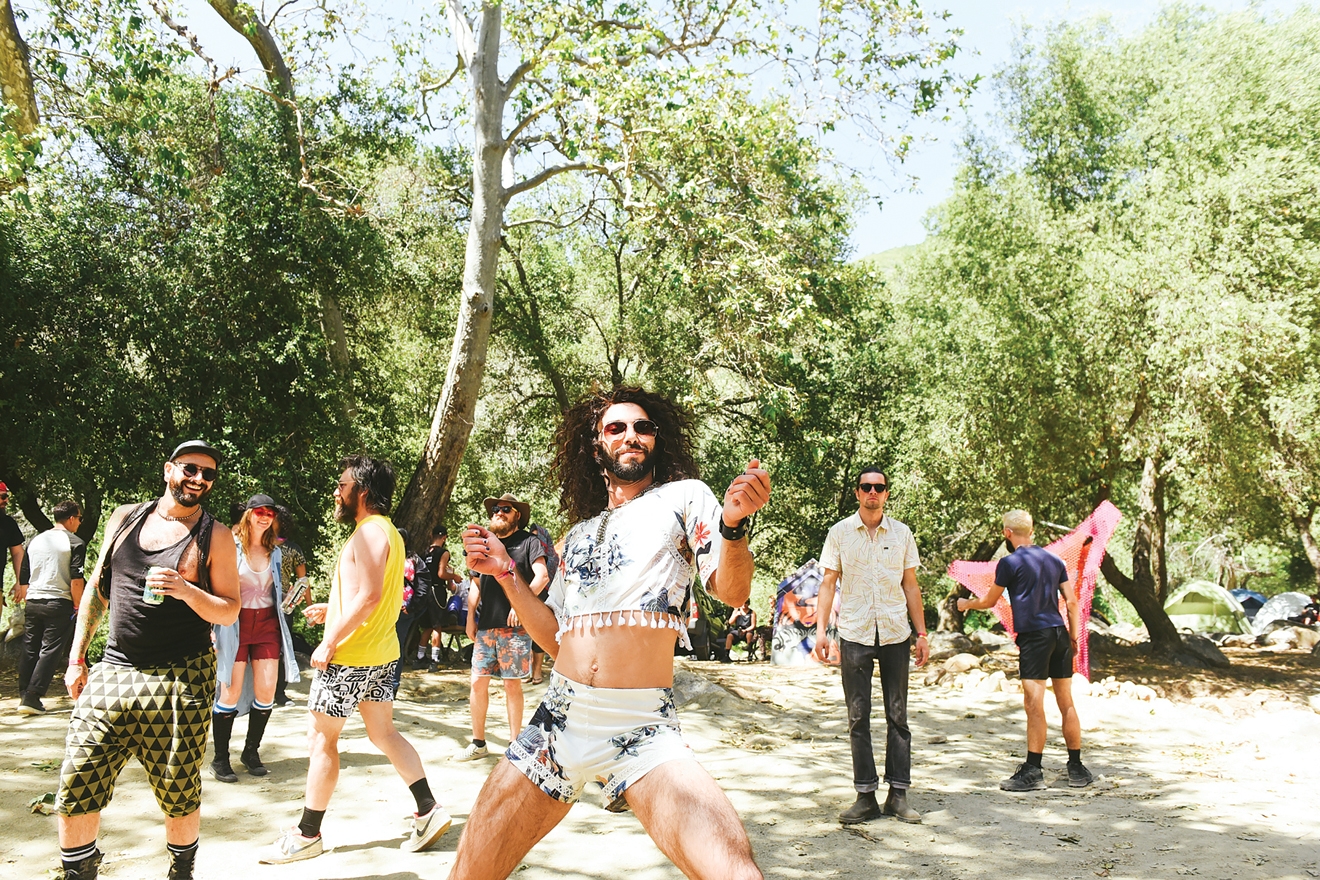 The last day’s attendance is sparse, but the remaining crowd’s high spirits are still intact. A big, brown puddle is taking up a solid portion of the dancefloor and Lawden springs into action, dancing around in the puddle one minute, before suddenly wielding a pickaxe and digging a moat to lead the water away from the floor and into the river. The sight inspires scores of others to help out, and soon all the water is channelled away and Lawden, Jeniluv and Masha have a fresh dancefloor on which to close out their festival.

“There were a lot of obstacles, but I think they actually made it more fun in the end,” says Jeniluv later. “Facing off against the elements can really bring out the best – or the worst – in people. It showed us that our community is really in it to win it together, and now that it’s over, I can’t imagine it going down any other way. It was one hundred and twenty per cent worth it, and we can’t wait to do it again next year.”

Another ancient Luiseño myth tells the story of a ‘home-warming’ celebration on the new land they had settled that turned deadly when intense storms descended upon their new home. To appease the Great Spirit, the tribe gathered to smoke sacred tobacco and dance the dark clouds away into the east wind. We can only hope that the Great Spirit will smile kindly on the next edition of Dusk Camp.

Dusk Camp rises out of the dust as California's intimate new festival
The Desert Hearts Indoctrination: a trip to the kindest festival in California
California Love
Get the best of Mixmag direct to your Facebook DMs