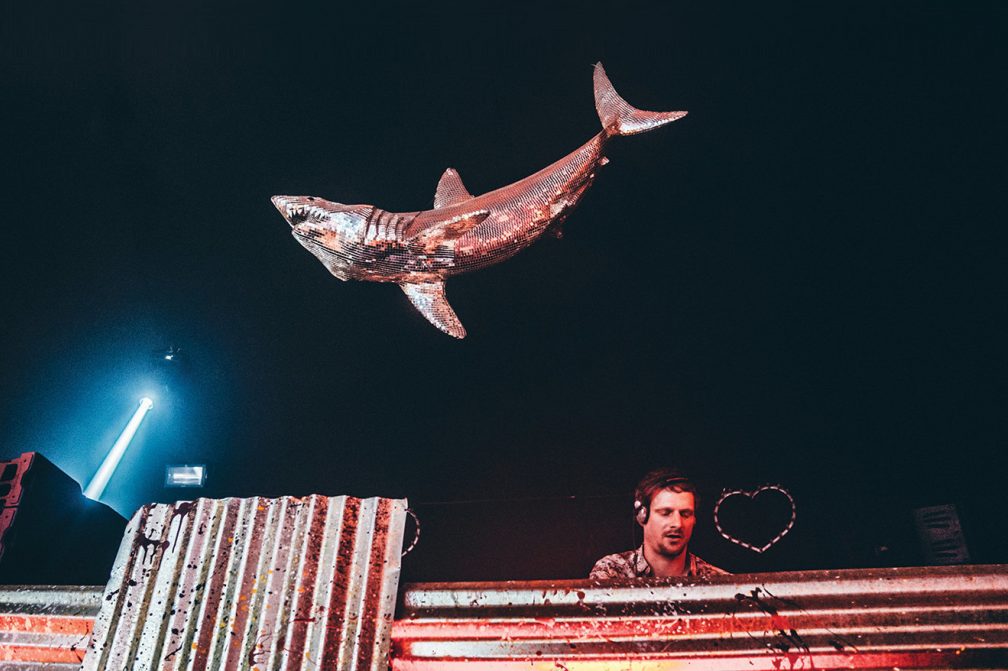 Almost everyone. “I have no emotions; I am a techno machine,” responds Koze flatly when we ask how the show went. Only moments after dropping his new track to wild excitement, Koze, aka Stefan Kozalla, has retired to his trailer and is dipping nacho chips into a jar of Tostitos salsa. “I need to work on my ‘famous’ skills, so that it’s not so important who’s playing on the biggest stage. Every ten minutes it felt like an entirely new, different crowd walked in.”

One thing you have to grow accustomed to is the manner in which Koze speaks, essentially Germanic stabs of bone-dry humor. It takes a while to work out when he’s being sincerely self-deprecating and when he’s purposefully messing with you. “But it was much too hot in there – I would like it if somehow they could reduce the sun next time,” he continues. “Americans have a flag on the moon; why can’t they do it on the sun?”

If Koze was at all frustrated by the rotating currents of the audience, the crowd he looked out at from under the glimmering maw of the Shark Disco Ball must have been different from the one we observed from among the great unwashed. Eschewing the easy temptation to build and build to a manufactured climax, they followed him in cultish fascination and were rewarded by that final, crowning moment of communal bliss.

“That’s a new track for me – it doesn’t even have a name yet. It’s not even mastered!” he says. “I don’t know what I can tell you, but every time I play it the roof is like, CRSSSHHH!” he continues, making the sound of a waterfall. “Because everyone thinks it’s the new Daft Punk.”

The song in question is barely a month old, built around a single guitar loop with little else but prototypical Koze restraint for around 10 minutes. As can be expected, the minimalism works.

“It’s a little bit too melancholic [to be Daft Punk], but it’s their idea that you need only three elements with a simple change – either of a bassline, or the decay of a loop. It’s enough, you don’t have to overdo it; you just have one magic loop, and then you change what’s below. The vocals are maybe different, though; not euphoric or hysterical, but melancholy. It’s sad disco!” he laughs. Then he looks at me in mock suspicion. “You’re hunting for headlines, aren’t you? That’s the headline: ‘Sad Disco’!”

The track could be huge, we say, our words nearly drowned out by the 4/4 kick driving from Mano Le Tough’s set through the thin trailer walls. “I hope so. This is my last shot. Seriously, if this doesn’t work I’m going to become a farmer. I’m going to go and grow olive oil in some lost Spanish garden.”