Located a bumpy 20-minute drive deep into the coastal jungle, Comunité festival’s site has the sort of spectacular natural beauty that no amount of production wizardry or LED displays could possibly compete with. The compact site consists of two clearings – the larger, more exposed ‘Sun’ stage and the ‘Moon’ stage, deeper into the bush – linked and surrounded by a web of sinuous paths that wind between the tall manilkara trees. The weather is warm and humid, though the jungle is dry thanks to the season. Down a flight of rough wooden stairs, tucked under a shelf of heavy grey rock, is one of the warm freshwater swimming holes known as cenotes that span the geological fault line that crosses this part of Mexico, and which, along with ancient Mayan ruins, typify this part of Tulum, the low-key, ‘ecologico’ neighbour of the flashier, more developed Cancun an hour up the coast. Think the opening scene of Raiders Of The Lost Ark, but with big, rolling beats rather than big, rolling boulders.

With just 1,500 adventurers and quite literally hidden away, the contrast of this 24-hour, overnight festival with the Spring Break-style exuberance of the neighbouring BPM festival is stark. “Maybe this is its antithesis,” says Comunité’s founder Juan de Valle; “a small festival, run by 100 per cent Mexicans. If BPM didn’t exist we would still have been inspired to do this”.

Juan and his fellow organisers have been running events across Central and South America for a decade, but the seeds of Comunité were planted when they hooked up with the super-hot German collective Giegling, home to the likes of Konstantin, DJ Metatron, Ateq and Traumprinz. “We were doing small parties on the beach with the Giegling guys,” explains Juan. “Then they started doing well and [last year] we ended up booking 30 DJs. Suddenly we had a festival!”

The sunset beach parties have continued as warm-ups to the main event, Avalon Emerson and Chicago’s Olin helming mid-week affairs before Giegling themselves took the reins yesterday, but this year the event has moved inland – not just, says Juan, because they liked the idea of the jungle vibe, but because “you can’t play vinyl on the beach”. 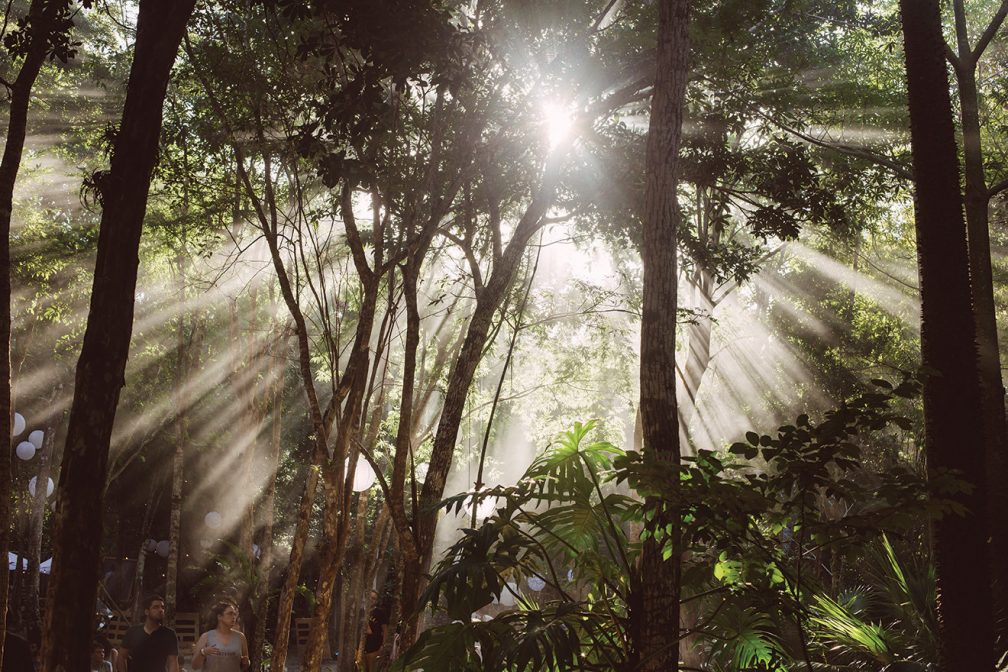 The line-up remains fittingly underground, with a host of Mixmag favourites from Omar S and Italojohnson to Fumiya Tanaka (pictured), Sonja Moonear and Kyle Hall. The stages are wooden with walls of dried rushes and palm fronds. There are little oases of tranquility throughout the forest, where hammocks swing lazily from pairs of trees and the flora filters the sound from the stages down to a gentle pulse. At 18.30, as velvet twilight falls, the tree canopy is lit up artfully from beneath in shades of red and green and a chorus of crickets can be heard above and behind the music as the invisible insects welcome sundown. The Moon stage is bathed in light the colour of fire. It’s magical, even when a trick of the light / mescal turns an innocuous hanging branch into something that looks like a dangling snake, causing Mixmag to jump 10 feet into the air with a manly shriek. Probably shouldn’t have watched The Jungle Book on the plane...

Scary trees aside, everything here was brought in by the promoters, who spent a week with a crew of 95 people assembling the stages, toilets, divisions and bars out here in the middle of nowhere. Again and again we are struck by the absence of sponsors and branding – a conscious decision on the part of Comunité which chimes with their commitment to sustainability (the food stalls are all vegan, and a percentage of the proceeds – not the profits – is set aside for charity).

“It feels like it’s been made with an incredible amount of detail and love,” says Italojohnson’s Johannes. “This setting… it’s nature, it’s impressive, it’s awesome. You don’t get that in Berlin!”