It’s safe to say that not much surprises us in the world of dating these days, but according to Amelia Dimoldenberg, “Whoever said romance is dead has never been on a date to Chicken Cottage”.

Amelia, or “the girl in the video with Chabuddy G” as she jokingly claims many refer to her as, is the 23-year old at the helm of hit YouTube series Chicken Shop Date. It's built up something of a cult following, with fans flocking to the channel to watch the poker-faced presenter settle down for food and a flirt with some of the brightest names in UK grime and rap.

From the time she “literally shut down Chicken Cottage” on a date with rapper Ghetts, (she’s still banned by the way), to her attempts to woo J Hus with his favourite drink (Fanta – no ice), when I caught up with Amelia, her real-life excitement for the series was a far cry from her cold on-screen persona.

As she waved me around her arty North London home, she talked me through the show's humble beginnings, explaining how she was turned down in the past when she attempted to get the show commissioned saying that “everybody just said no”.

Now the show has returned for its third "seasoning" and it's bigger and bolder than ever, with three brand new episodes. And as Chicken Shop Date continues to flourish independently, it’s clear Amelia’s earning a rep as a film maker and comedian – one chicken nugget at a time.

Where did the idea for Chicken Shop Date come from?

I started Chicken Shop Date when I was back in college. I remember getting an email from one of my tutors about this youth club called The Cut that was making a magazine as part of its programme. They were looking for contributors under 21 and I’d always thought that I’d wanted to do something in magazines. I don’t know if I ever thought I wanted to be a journalist, but at one point I did want to be the Editor of Vogue.

I started going to this youth club and it was amazing. It was great to meet all these different people who were interested in mainly music, and fashion, but the music side of it was really what caught my attention as they were all listening to grime. I was super interested and wanted to know more about the music. I have this thing in me where no matter what the topic is, I don’t want to be left out of the conversation – I want to have something to say.

That’s probably worked out quite well for you as a journalist.

Exactly, I just want to be able to have an opinion. So as soon as they were like, “What do you want to do at the magazine?”, I said that I wanted to interview grime MCs, musicians, all the people everyone was talking about so that I could get to know them myself. I had the idea to interview people and we always had these big discussions as a group about new content ideas, so I said, “Let’s do it as a date”, because that might be a fun way to interview people. Then someone suggested going somewhere you wouldn’t usually go on a date, and that’s how we got the idea for the chicken shop!

I did the first one with a friend of mine called ItsNate and we went to a chicken shop in Dalston which has now disappeared. But it was literally so small there were only two seats in the restaurant. Then I started doing that whenever I could, the magazine had some contacts with PRs so I would just be emailing, I’d get friends of friends, and just kind of do them whenever I could throughout college.

Then I started posting the links to my Facebook and people would really like them, and I started getting attention from other people as well. I’d go for meetings with big places and they’d say, “Hey, this is really cool”, but nothing would happen because they didn’t really know what to do with it. They wouldn’t sort of believe enough in the idea to take it forward, so I thought, “Okay then, I’m just going to turn [the concept] into a video”. Because, whatever was happening was funny, just this little blonde girl in a chicken shop, with, like, Stylo G. It was just a weird situation and super awkward and it was just like how the show’s filmed now, but I was so nervous filming it.

It’s a whole other level of putting yourself out there isn’t it.

Exactly. It’s a whole other level and I wanted to do it well and I didn’t know who would film it, we didn’t have any budget or know how I was going to do it. So, the first episode was filmed with Ghetts because the only PR who ever helped us out at The Cut had just started looking after Ghetts, so we thought he would be really into it. 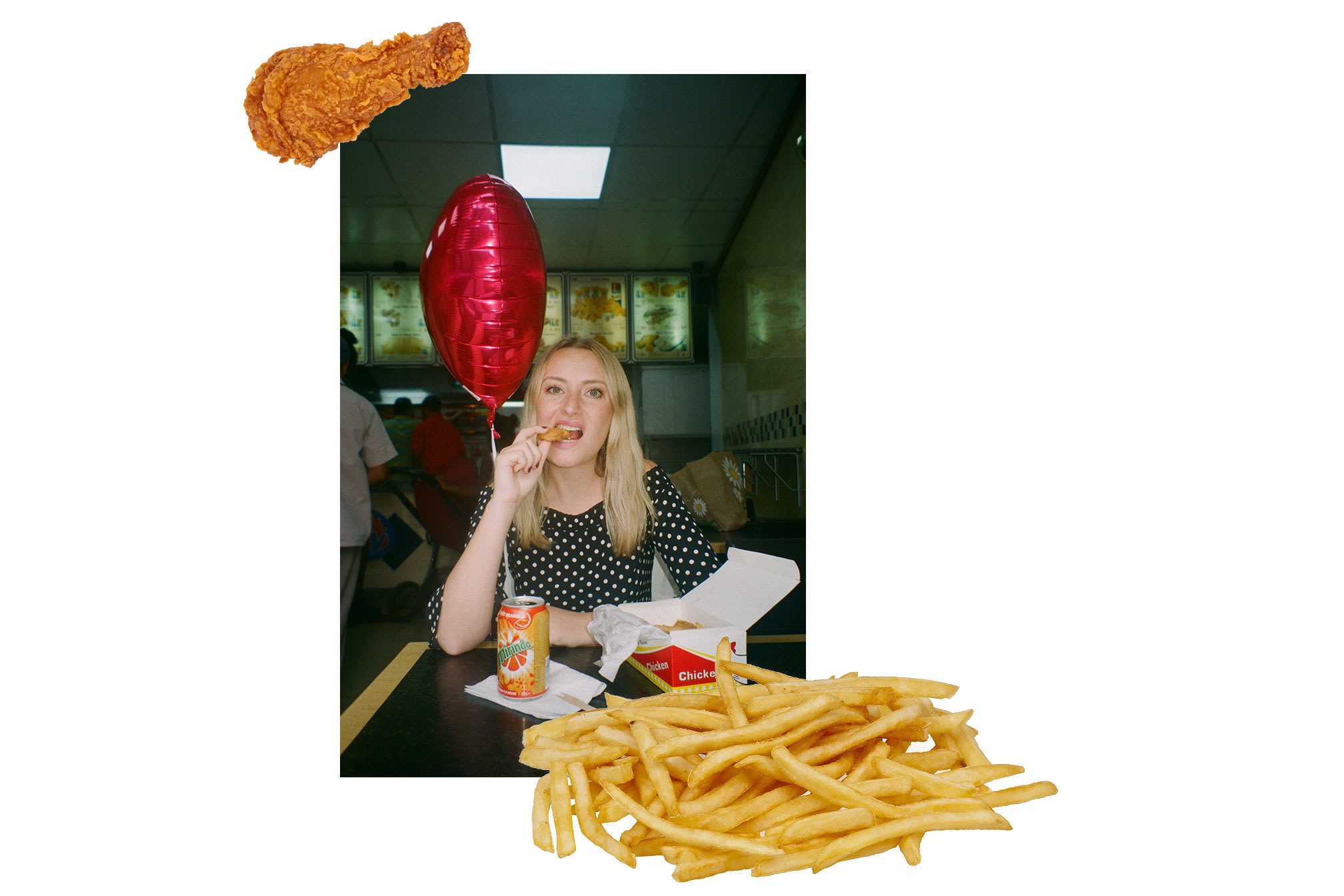 He seemed to be more receptive to your humour, there was more of a back-and-forth compared to some of your other dates.

Yeah completely. I like that about the show, I’m not expecting anything from my dates, I don’t need a ground-breaking interview where they say something really insightful; I can interview 67 and they can just murmur something and it will still be funny. It kind of works with all dynamics, the only one I don’t think it worked with was Logan Sama. I think that was because he was too self conscious, or thinking about things too much. Now, people know what they’re getting themselves in for, whereas before they didn’t. I’m interested in seeing how it progresses because I want to get bigger artists, and I don’t know how that’s going to work because they are so media trained and most of the people I’m used to interviewing aren’t at all, they just come with their mate and you get so much out of them.

What has doing the show taught you about how men date?

Everybody is different when they are on dates and is maybe a bit shyer or a bit more confident than you expected from their public or on-stage persona. It’s weird because you never know if people are into the date bit or are just there for the show.

Do people ever try and flirt with you?

I would love to say yes but I have to say no. I’ve never been propositioned from a Chicken Shop Date. It’s never worked out for me, maybe this whole idea of me getting a date from this in real life, well I should just give it up because it’s not working.

I’m a method actor. I don’t speak to them before and it’s awkward, then we sit down and it’s exactly as you see. I always find that as it goes on, I get better responses from people. When I’m editing it’s always the end section of the interview that’s better. It’s just so different for me because I’ve done so much print journalism, and with the show you can see them, you can see their reactions and you can tell if somebody is not into it. Then obviously with a written interview you wouldn’t include those bits and you can flare it up a bit with what and how you write it. We film for like 40 minutes, and it’s cut to maybe 5 minutes maximum. 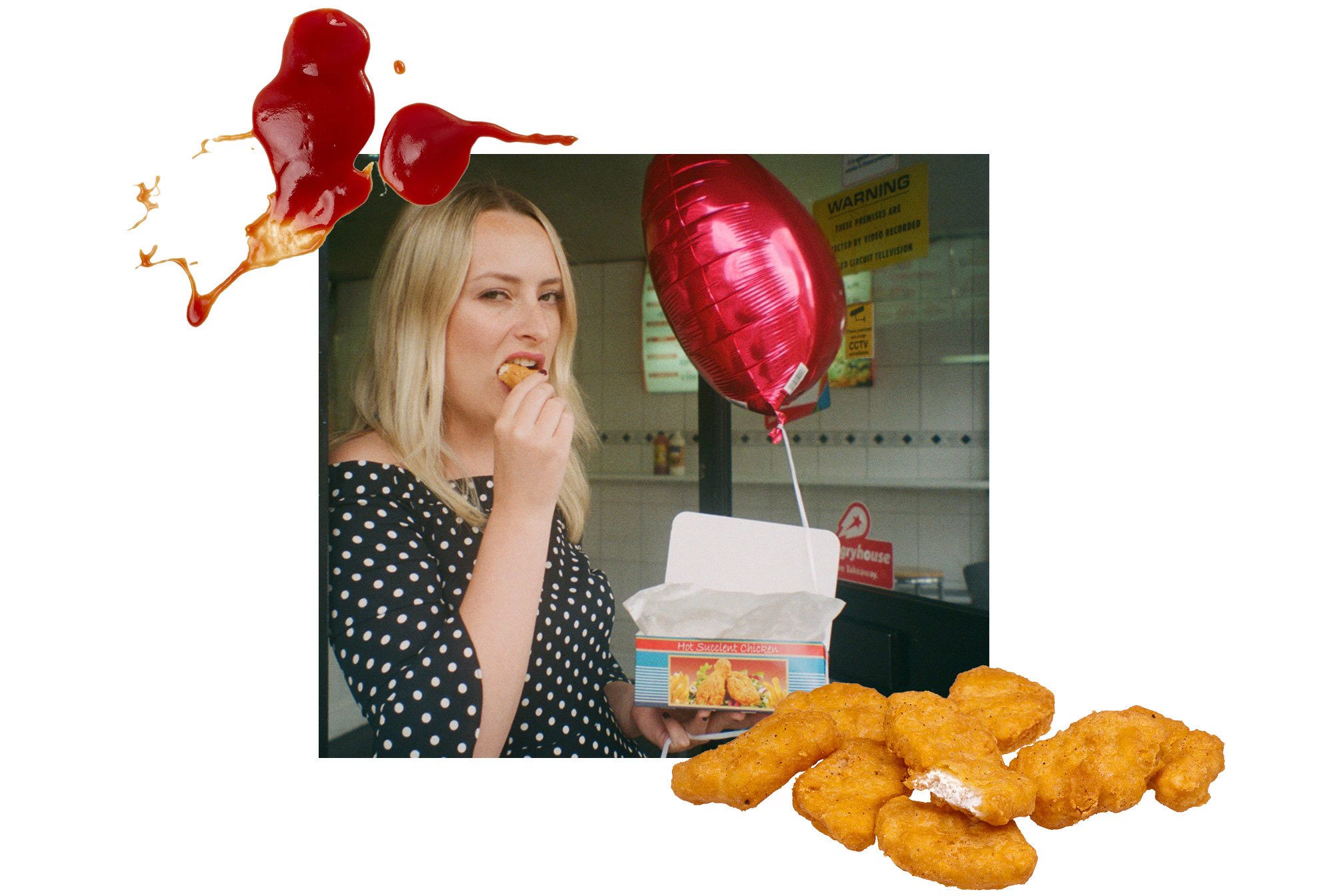 When it does start going sour, what’s your go-to method of getting the date back on the ball?

“Next question!” Like, that’s when I freak out. I’m the director as well as the talent, so in my head I’m having to ensure I’m performing, and asking the questions, and getting the best out of the guests so it’s a lot to think about. It’s always better when I just forget about everything and just fully concentrate on what I’m asking them.

In terms of your humour, how much of it is your natural sarcasm and how much would you say is a character?

It’s an exaggerated version of myself. In fact, when it first started it wasn’t a character, it was never meant to be like that. It’s literally how it happened, people must have just assumed I was so bizarre or so weird it had to be a character. When the Ghetts one started, I was just being me. In the edit is where the character comes through, we chop and cut things, we make it more awkward, we add awkward pauses, but during the date it’s just me. Now I play on it more, I know what works. Every episode I feel like I’m different, I don’t really know my character, I’m not set – I don’t really know what it is yet.

Do people other than your friends and family just assume that this exaggerated version is how you actually are?

Oh, all the time. The first thing people always ask me is: “Are you actually like that in real life?”. I always have to be overly nice in case people think I’m either stuck up or a bitch so I try to be overly friendly because I look so stone-faced on the show. When I was on 1Xtra with Charlie Sloth I thanked him and was really excited - and he was so surprised I was actually nice!

People on the show react so human sometimes, it’s a nice reminder when it comes to some of these famous faces - they are in fact like us, right?

That’s the thing. It shows everyone that, “Hey, they’re just like you”, or in turn nothing like you, and that’s what I love. And hopefully, despite it being such a weird environment, Chicken Shop Date allows people to be themselves.

Chicken Shop Date ‘Seasoning 3’ is out now, tune in to catch the first episode with Kurupt FM below.