The packed little bus pulls up at the aftershow party at about 1am on a Tuesday morning. One of the venues for the Atlantic Music Expo, a showcase of the distinct musical melting pot of this part of the world, it’s a commercial space simply entitled ‘Warehouse’, located on the outskirts of the city of Praia, Cape Verde. The venue looks like a nondescript hut from the outside, but inside it’s a deceptively large, sprawling whitewashed room with space for around 500 people. Dim blue and orange lights complement the hip hop local DJs are pumping out from speakers positioned on all four corners of the room, interspersed with bursts of smoke from a smoke machine by the stage. Most people are dancing; others are mingling outside by a water fountain next to the smoking area. On the decks is local DJ Danny Boy, spinning hip hop joints from Cape Verde and further afield. The punters on the dancefloor – some in T-shirts and jeans, others in colourful West African-patterned outfits – are swaying their bodies and nodding their heads.

Praia is the largest city in Cape Verde, a country made up of 10 small islands, 300 miles off the coast of Senegal. This young state only gained independence from Portugal in 1975 and most of its population is under the age of 40. Hip hop is a relatively new phenomenon here, with the young looking west across the Atlantic to America for inspiration. But Cape Verde has its own take on the genre. For a start, rather than rather than lyrics about guns, bitches and bling, Cape Verdean artists prefer to rap about the consequences of drug addiction, Cape Verde society and the general struggles of day-to-day life. Unlike the typical mic and turntable, they prefer a traditional band set up of electric guitars, bass, drums and keyboards. The scene grew out of predominantly poor areas of Praia, such as Achada St Antonio, where there’s a real DIY ethic of establishing your own recording studios, booking your own shows and promoting yourself online.

A prime example is Ga Da Lomba, whose fluent English comes from time spent living in America and listening to rap music. The next evening, he’ll play the outdoor stage entitled Santiago Cabo Verde. Describing himself as “a social activist, an artist and a rapper”, he aims to prevent and rescue young people from drug use by visiting schools to talk about his own battle with = addiction, as part of his social project called Nunca Experimentar. 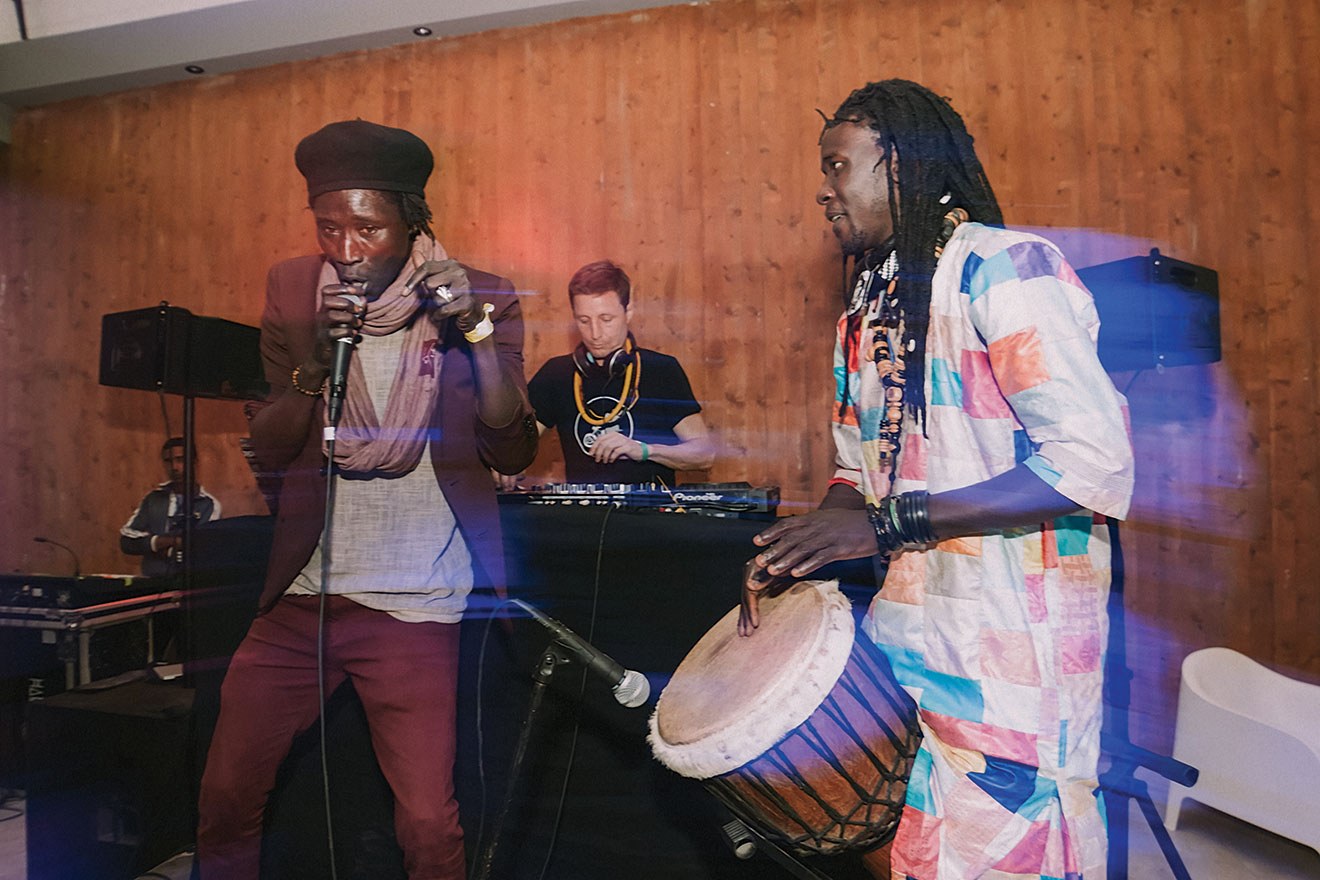 “I love rapping in first-person format and I use music as a vehicle to help the next person or generation to stay away from drugs,” Ga Da Lomba explains. “I also love rapping about critical stuff like things going on in society. So when I say that something is wrong to people on stage, the people can go out there and try to correct it. I always say that you can’t talk about the garbage outside if you don’t clean your own house.”

Prowling the stage, Ga Da Lomba almost roars his bars to a mostly male audience, visuals of his charity work in schools playing as a backdrop. Despite the subject matter, the atmosphere is as rowdy as any grime moshpit, the mostly male and muscular crowd jumping around to the frenetic drums.

The crowd for female artist Nissah Barbosa couldn’t be more different. Barbosa – who has been rapping for six years and also learned English through listening to rap – also aims to discuss societal issues and concerns in the country. “It’s not that we have problems that are different to anywhere else around the world; for instance, I’ve recorded songs about bullying and what it’s like being a teenager,” Nissah says. “I also think I’ve opened doors for other female rappers to come through in this scene – we need more girls because hip hop still has a lot of discrimination towards women! It’s a big challenge, but I’ve gotta do what I gotta do.” With a vocal style reminiscent of Cardi B, she’s toured across Europe, playing shows in Switzerland, France, Luxembourg and Portugal, with plans for the US this summer. When Montreal-based electronica act Qualite Motel ask Mixmag later that day if we know any good local MCs, she’s the first person that comes to mind.

A quick soundcheck having confirmed the chemistry, Nissa joins the five-piece for their showcase that evening, to the obvious delight of the young crowd at the Rua Pedonal stage who throw up their hands and scream with delight when Nissah starts spitting the lyrics to her latest single ‘Pinga’, Qualite Motel’s up-tempo electronica and samples perfectly complementing her deft lyrical flow. In front of the stage there are small children breakdancing, teenage girls screaming the lyrics back, middle-aged women clapping along and young guys crowding the fence separating the stage from the floor.

“When even kids are singing along I’m like ‘What? How is that possible?’ says Nissah after the show. Just another example of the passion in Cape Verde for their own unique take on the global phenomenon that is hip hop.

Electric Animals Festival proves something special is brewing in Costa Rica
One dance: Ghana's Asa Baako is the festival set on uniting African music lovers
In Bloom: Accra's explosive club scene is like nowhere else on Earth