As the sun rises over H.I.S.S. festival in Uruguay, Barem and Federico Molinari are two hours into an epic back-to-back set that sees the two Argentinians laying down a seemingly endless supply of cheeky tech grooves. They're exactly the sort of tunes you need at 6am: not introverted or weird, but awash with rolling basslines, mesmerising percussion and hypnotic riffs. It's a classy sound the two friends specialise in, and the crowd – a mixture of hot South American señoritas and good-looking young men – are thoroughly locked in, enjoying the fact that there seems to be no end in sight.

Eventually they finish their set: Barem's played for a total of six hours, and you get the feeling he'd have liked to have kept going; certainly the Mixmag staff present would have happily stayed on. There's a reason Barem is currently one of South America's most popular artists, and it's obvious why: his techno is deep and highbrow, but at the same time – wait for it – fun.


Two months later we catch up with the 31-year-old before his gig at the Moulin Rouge, Paris. We're at a quirky little restaurant that provided the setting for a scene in the French film Amelie. And boy, do they let you know. Posters of actress Audrey Tatou adorn the walls, and even the waitress informs us of the connection, lest we hadn't gathered. After acknowledging that it is indeed a great piece of cinema, we sit and order. Barem is dressed well, in understated colours and classic knitwear, and the only aspect of his appearance that betrays his love of surfing is a floppy haircut. Not reserved but evidently thoughtful, he veers away from meaningless small-talk towards more open, intellectual conversation. The red wine arrives and we ask about his label, Fun Records, an imprint he's set up with multi-instrumentalist Alexis Cabrera. "The name says it all," he says. "We want to have fun with it in every possible way, from making the tracks to working at the label to the vibe at the parties." That's not to say the tracks are all going to be about unicorns and rainbows, though. "Dark music can be fun too," he says.


So does making such a point of having fun a decade into a career suggest that Barem wasn't having any beforehand? "Oh no, I've had the best time. But there's point you reach in this game where it becomes a routine. It's not a routine lifestyle of course, but nevertheless, it is a routine." He's not complaining, just being honest about the headspace he found himself in. "For me, Fun Records is about getting out of that place, to find new challenges and to get a different outlook." 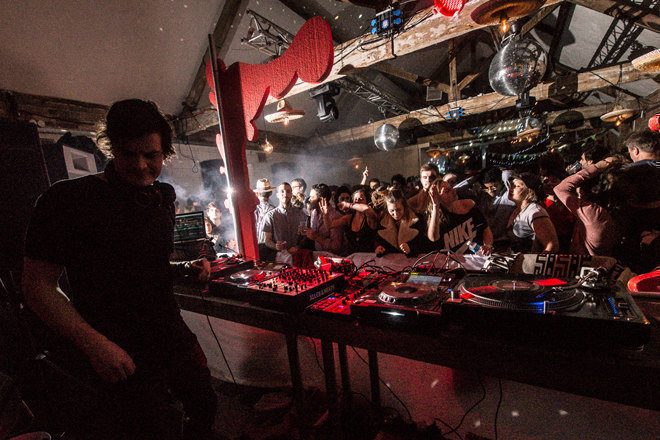 Barem was part of the core Minus team assembled by Richie Hawtin that dominated the minimal sound. Those years were a massive learning curve, and they shaped him. As a young DJ he went from guessing how everything was done to seeing how the master did it. "Richie had a specific approach to everything: how to think about music, to control the crowd, to mix, to grow your technique," he says. But he learned more than that: "He knew how to conduct himself in interviews, how to handle every conversation and how to get what he wanted in an educated way, without showing off or offending anybody."

Barem was the perfect student, and rose through the ranks playing incredible gigs worldwide. Before he knew it, nine years had flown by. "I've been insanely happy and at times I've been pretty depressed," he admits. "I've been scared, too, when I've thought how fragile a career DJing can be." Not that he has a bad word to say about his former crew. "[After] all my years at Minus there's maybe only a few people that I don't consider good friends," he says. "And they were the interns I didn't get to know!'

WE FINISH OUR food and make our way to the club through the Pigalle district of Paris – an area once known best for its brothels, but that's now increasingly becoming the city's hipster hangout – and arrive at the Moulin Rouge. An icon of French culture, its glory days were at the turn of the century when you'd go there to see the racy (for their time) can-can dancers. A century on, and tonight people will be going nuts to the finest techno. We walk in and the only elephant in the room is an empty dancefloor. Both Mixmag and the promoter notice, but it's bad form to say anything. Barem's the headline act, but he's due to go on at the surprisingly early time of 12.30. Having seen him in his element just a few weeks ago, we're keen to see how he deals with an earlier slot in a rainy European city rather than the more seductive sunrise session on a beach.

The kit he set up previously has been moved, but he doesn't grumble as he sets about re-connecting it all during his first track. Starting with a bumpier house sound, he gets himself settled as the crowd trickles in. He finds his groove and 20 minutes in, as the dancefloor fills up, drops 'Funatics' from the first Fun Records EP. The snares, awash with reverb, and the naughty bassline prove a hit with the crowd, and soon he's got a captivated audience. The French don't hold back when it comes to dancing; we witness them throwing down some seriously alien moves, in particularly a crew who've blatantly been watching a few Chicago footwork videos on YouTube. In Uruguay Barem went in hard and took things groovy; here his set gradually gets tougher, dropping both his recent release on Rhythm Cult and his latest on Dubfire's SCI+TEC label. The latter is a techno bomb with Latin elements and the Parisians lap it up. Looking out from the booth on the theatre-esque space, now packed with almost a thousand people, it's been quite a transformation. 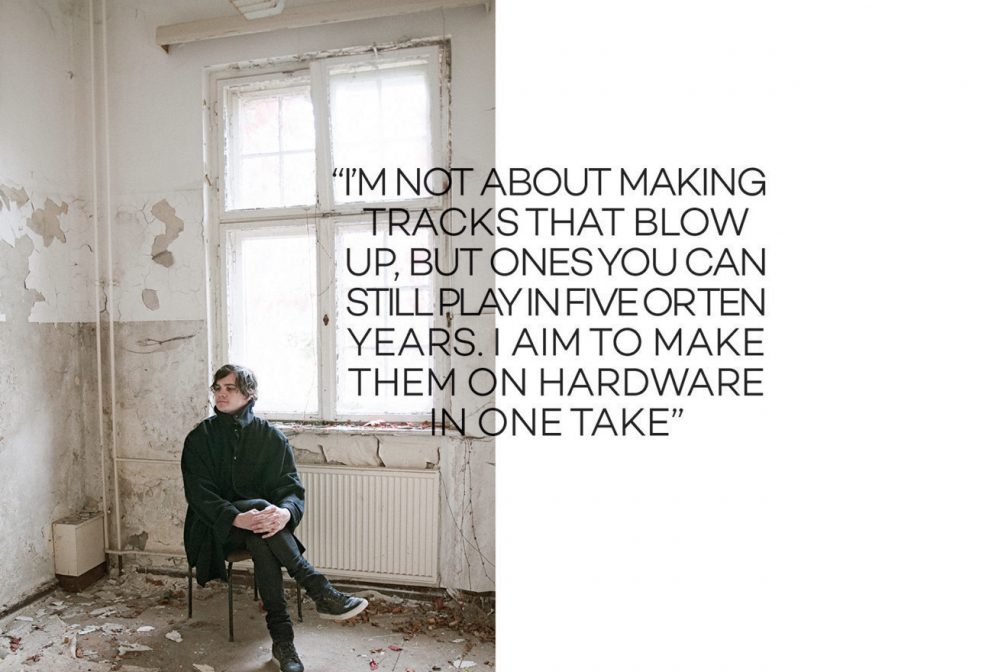 "It was cool in the end, no?" he asks nonchalantly afterwards, lighting up a cigarette in an already smoky green room. We agree, and ask if he was happy with the reaction to his forthcoming tracks. "Tonight I was," he says. "With it being the first release on Fun Records, I want to make sure it's right. I always test records first. You're not always looking for the crowd to go nuts, but subtle signs: smiles, closed eyes… it all depends on the tune. I'm also really glad they liked my track 'Vanda' on Rhythm Cult. For me it's an exciting label, putting out tunes from people like Deadbeat and lot of artists I really respect. In many ways I've built my sound listening to this sort of tunes, so I love the concept."

The promoter brings us a bottle of vodka and we pour ourselves shots. Barem prefers to talk about other people rather than himself, but you learn a lot about him from the company he keeps. Two of his best friends are label partner Alexis Cabrera and Federico Molinari. According to Barem, Alexis is "one of the most modest people I know"; he only mentioned to Barem that he'd spent nine years studying at a respected music school three years into their friendship. Federico Molinari apparently has a similarly humble nature. Starting his career working at Freebase Records and the famous Robert Johnson club, he made huge waves when he started Oslo Records. A gifted DJ and producer who uses his own, custom-built modular systems, he won't bring it up unless you really push him to.


"Federico never wanted to be famous," explains Barem. "His ethos has actually been an inspiration for Fun Records. I'm not about making tracks that blow up, but ones you can still play in five or ten years. And production-wise I aim to make them on hardware all in one take."


It's a method used by the man Barem considers to be the best in the business: Ricardo Villalobos. "That's why he makes 45-minute tracks – they're done in one take. He has no system and just plays whatever he feels. When he's on fire there is nobody better than him. He goes with the flow." The two DJs come from two very different South American countries. Ricardo hails from Chile, and embodies the flamboyant Latin-American flair. Barem's home town is Buenos Aires, the most European of all South American cities; less wild, more refined. Their music reflects this, but there's a place for both styles. As a man with a tendency to over-think, you get the impression it could be Ricardo's ability to live carefree, in the moment, that Barem really envies.

We polish off the bottle of vodka and get nostalgic. "This music used to be intellectually better," he says. "When I got into minimal there was something unique about the people: they were into science and technology. Nerds, really! Not acting like rock stars. We were weirdos listening to music." He has a point. Dance music now dominates the charts, tickets for Marco Carola sell for a rock concert price of £70 and scenes that used to be made up of like-minded people are often rooms packed with people who have been told the music is cool.

"I'm not saying I'm the one bringing a load of new ideas. I'm not," he says. That kind of self-deprecation makes a refreshing change from many artists who can't see beyond the bubble of their scene. But the fact is, Barem has plenty of ideas. What he means is he's not creating music that's going to flip dance music on its head like, say, jungle did back in the 90s.

He's also set up many non-music-related project with friends he's made around the world. "At some point I may want to quit DJing because I'm tired or bored," he says. "And should that ever happen I don't want to keep playing just because I need the money. There's something tragic about that.

"Plus, after years of doing this I could never have an office job. Well, I could, but it would be a painful transition. My friends with desk jobs tell me, 'Mauricio, you would never survive!'" he laughs. But for once Barem needn't over-think the future. Based on what we've seen and heard, in Paris and Uruguay, he won't need to write a new CV any time soon.