Located in the shadow of the Arc De Triomphe is Paris' Showcase, a former boatyard converted into a club and concert venue. Inside, clusters of razor-sharp Parisians stake their spots between the exposed brickwork arches, the dancefloor below bustling with locals fuelled by the anticipation of seeing their country's hottest new export inject some gangster flavour into the historic capital. Although his set with partner DANCE is well over an hour away, Amine Edge stands in the booth among his extended CUFF family, from DJs and their partners to PRs and tour managers. It's the first indicator that our cover stars will be hard to separate from their label peers.

"CUFF is more like a family, like a hip hop crew," label boss Max tells us. "All our artists are equal. We don't put names in bigger text on our line-ups to separate them". This may be the case, but G-house pioneers Amine Edge & DANCE surely sit at the head of the family table. 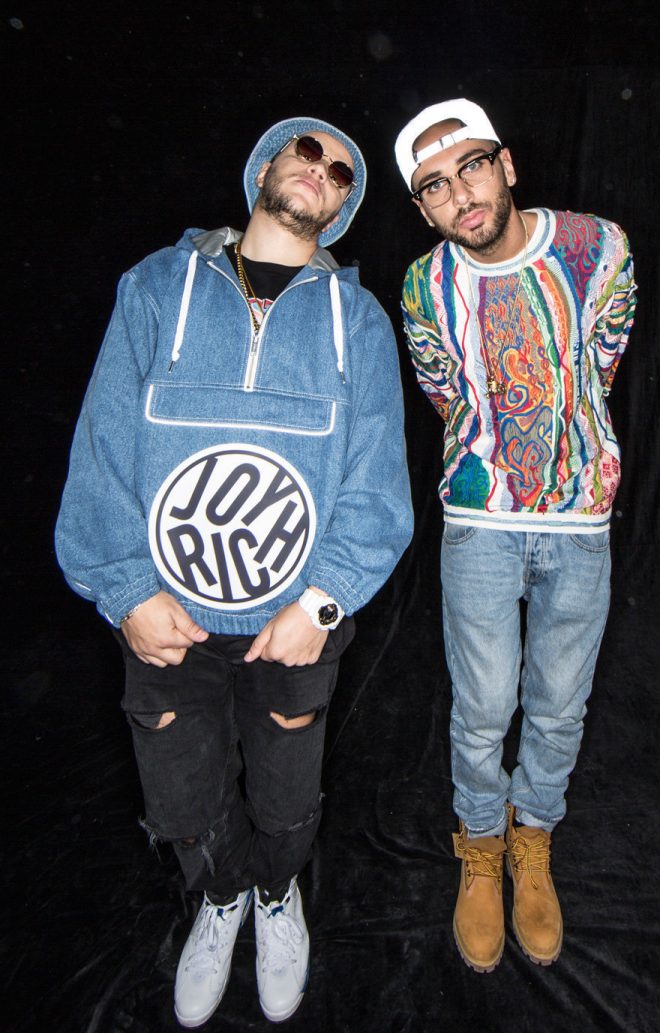 After a long wait, DANCE finally enters the smoky room at the back of the club.

Clad in a white, back-to-front baseball cap, a white Simpsons T-shirt bearing the legend 'Beware the eyes of Marge' and with a finely-trimmed beard that surely took as much engineering as one of the duo's basslines, he greets Amine Edge (black cap, black long-sleeved shirt, stockier build) with a short but sincere man-hug.

Finally, the room clears (mostly – for now) and the more visibly focused of the two, Amine, readies himself to answer our first question.

As he describes the area the two grew up in as "A mixture of posh and ghetto", a loud pop from a bottle of Champagne being opened by DANCE punctures the conversation. It's a moment that encapsulates the contrast between those early days and where the pair find find themselves today.

Born in the tough port city of Marseilles 31 years ago, Amine and Laurent, aka DANCE, met in high school. Both had parents who were interested in music – though from very different ends of the spectrum.

While Amine's mother enjoyed Arabic music and his dad was into blues, DANCE was subjected to Elton John and French singer France Gall. "That's why I hate them," he says, the first of many glimpses into his forthright personality. Like many young people, it was an older sibling whose tastes were the most influential; in his case a sister who was massively into the r'n'b and hip hop that would go on to inspire him, his musical partner and, of course, the G-house sound.

But before all that was school, a chore that neither boy enjoyed. Though he doesn't say as much, with his early arrival this evening and his rarely wavering focus throughout the interview, you get the impression that Amine would have made the better student (that said, he did try to nab Mixmag's list of questions before we started). Perhaps aware of his reputation as the joker of the pair, Laurent is keen to defend himself. "When I was young I was first [top of the class]", he explains. Amine, smiling dismissively, isn't having any of it. "He was more messing with teachers and stuff like that," he says. "OK," Laurent accepts; "I was a big mess. But I was good!"