A culture-shifting energy burned through the acid house movement in the Second Summer of Love. Long before electronic music rose to global phenomena status with DJs headlining stadiums, the spirit bursting from a generation of young people fuelled by mind-altering drugs and sounds carried enough potency to break out from the niche dance music subculture and impact upon the wider world. From the contemporary tabloid reaction to hit plays decades down the line, acid house lit a spark that made the wider world take notice. Reminisce on 10 key times below. 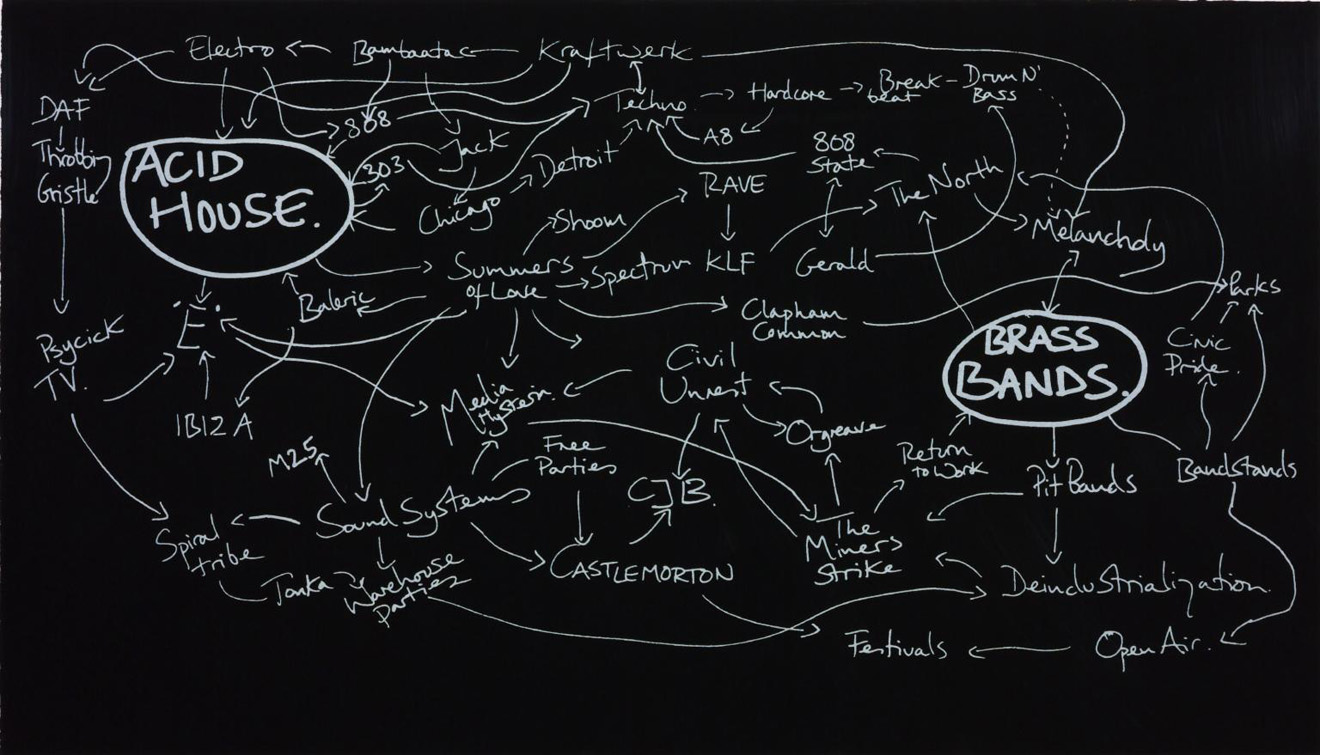 We doubt that when a load up of pilled up Mancunians descended upon the The Haçienda any of them thought university professors would be looking back to their exploits and sonic choices for educational innovation, but that’s the argument Professor Peter Dale of Manchester Metropolitan University put forward last year. He raised the point that music has traditionally been taught with a focus on classical styles in the classroom, and that playing music young people are more inclined to such as techno and electro would lead to higher engagement. In his op-ed, he noted: "For a lot of these kids, they've grown up with this music. Their parents were probably ravers in the heyday of 'acid house'. School music lessons, however, very rarely even acknowledge its existence within British culture". 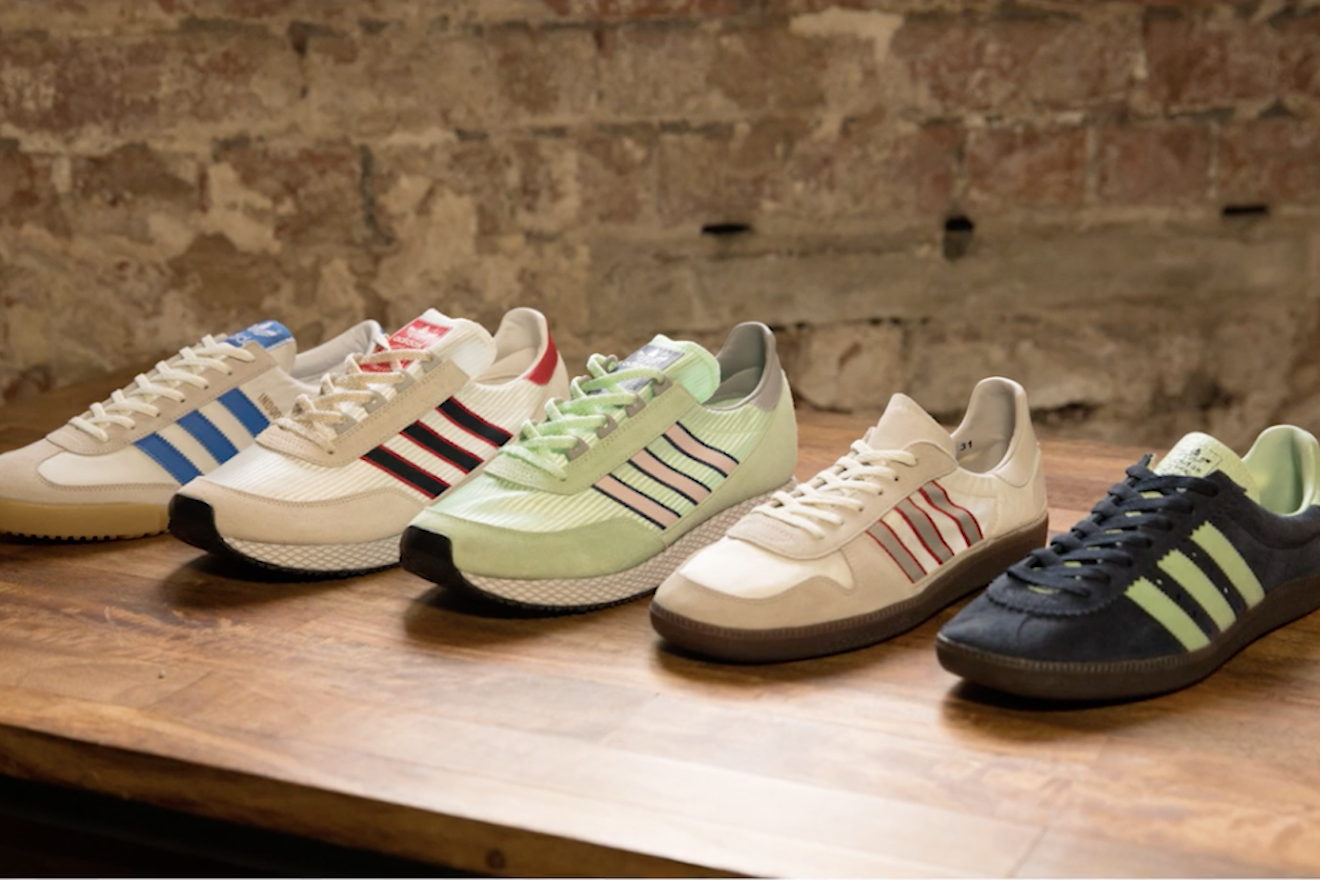 If you’re familiar with the stylistic choices of the Second Summer of Love, you’ll know Adidas was a dominant footwear choice. After the ravers made Adidas their own, the sportswear brand is celebrating the subculture 30 years on, releasing a range of trainers influenced by acid house for the Spring/Summer 2018 collection. Designer Gary Aspden said: “It felt like an interesting story to tell because adidas had such a relevance within that subculture … Running shoes were the best thing to wear if you were going to go out all night dancing.” 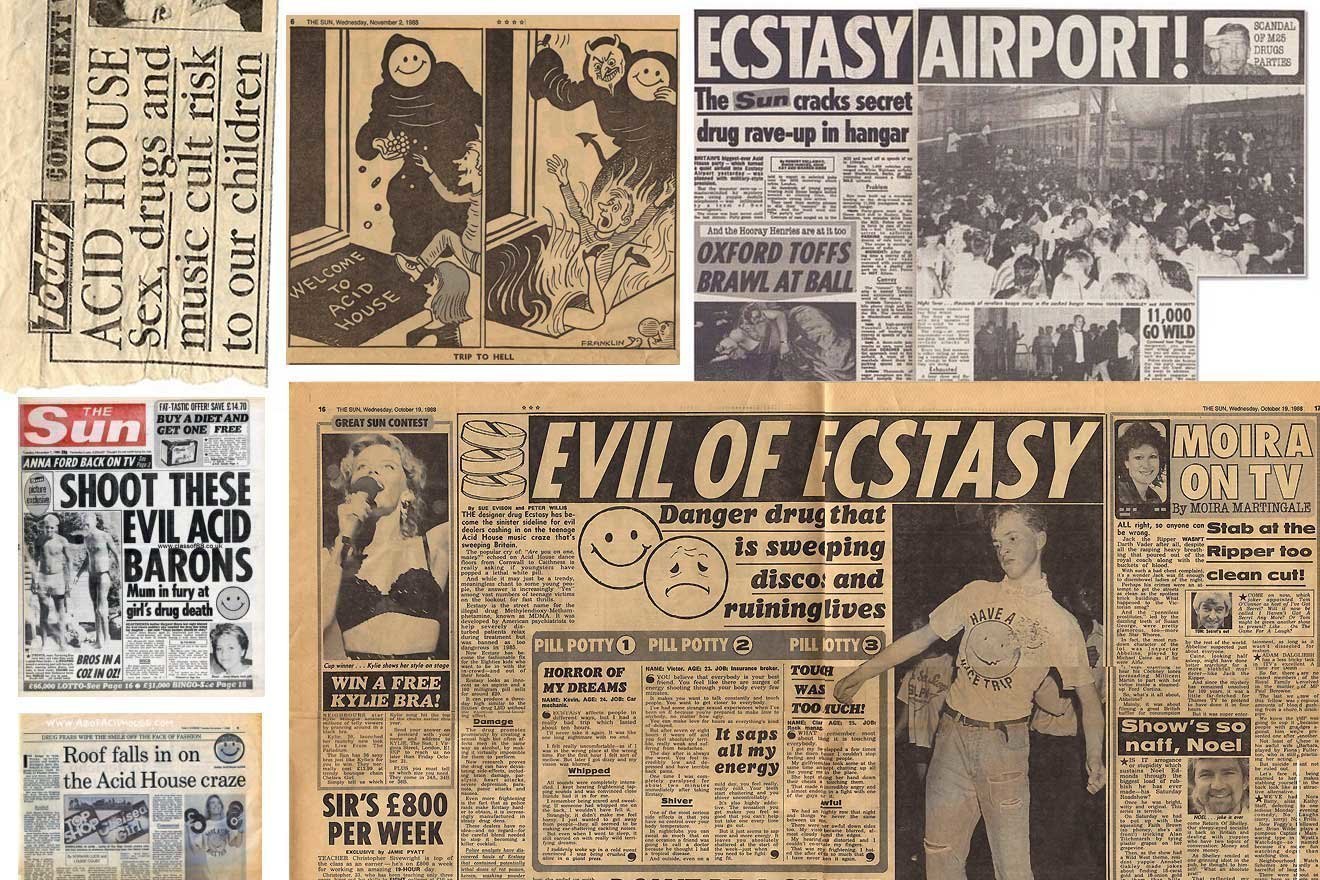 One of the darker picks in this list. Naturally, a movement powered by youthful energy and substances that united people from across the societal spectrum scared the hell out of the right-wing press, and red top front pages, especially The Sun, were filled with scaremongering headlines such as “Evil of Ecstasy” and “Shoot These Evil Acid Barons”. Even though The Sun initially praised acid house as “cool and groovy”, a sharp editorial turn quickly followed and the paper’s sway on public opinion played a significant role in the ensuing government crackdown. Parliament passed the Criminal Justice and Public Order Act in 1994, which made it illegal to gather and dance to "music that includes sounds wholly or predominantly characterised by the emission of a succession of repetitive beats”, and the rave scene was suffocated. 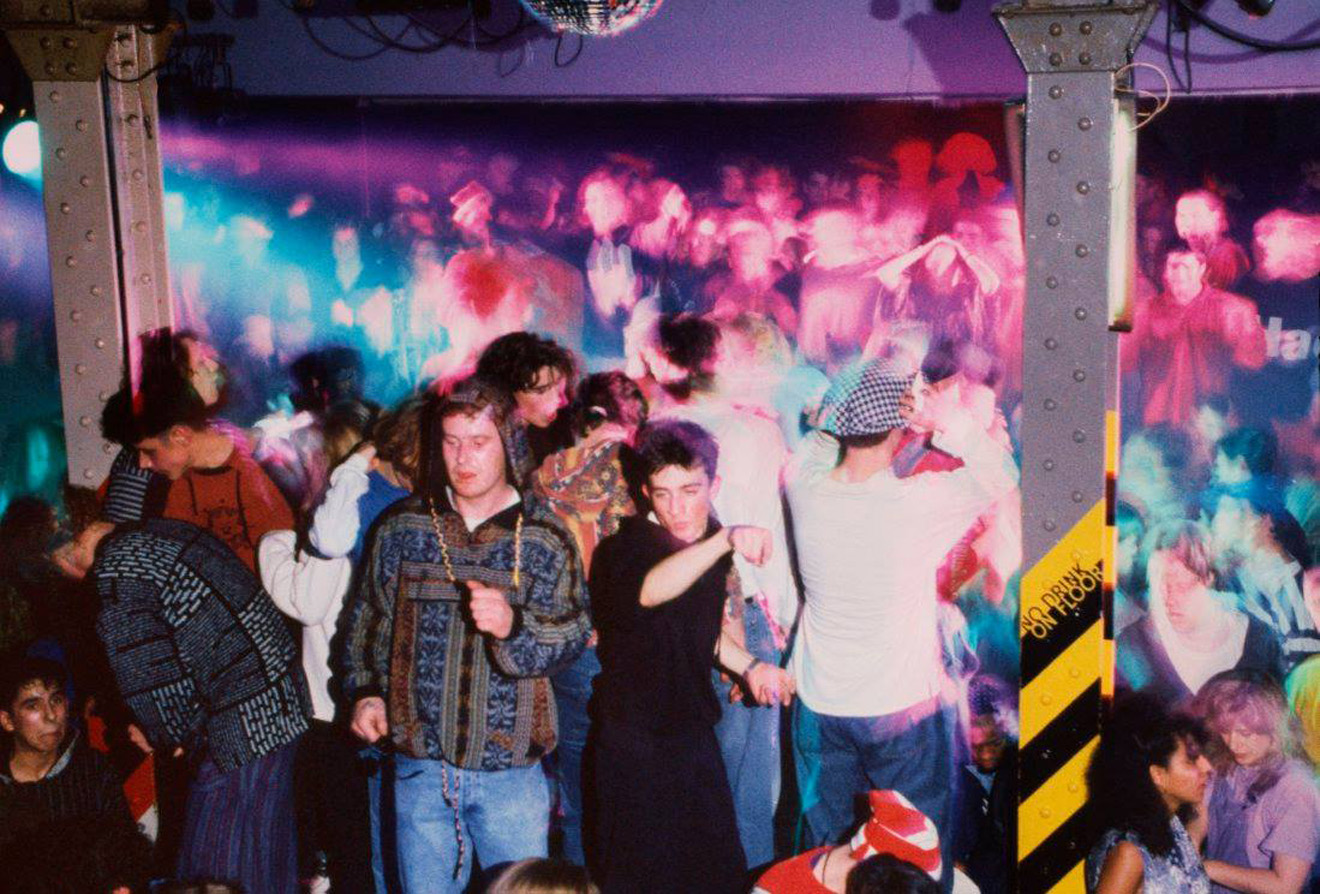 The Haçienda named as one of England’s most important sites

There’s been some governmental revision of acid house after the initial suppression of the movement in the 90s, with its cultural value now recognised by our ruling overlods. Earlier this year Historic England, an executive non-departmental public body of the British Government, bestowed The Haçienda with the honourable recognition of being one its designated ‘most important sites’, alongside the likes of Abbey Road Studios, Shakespeare's birthplace of Stratford-upon-Avon and Charles Dickens' former home. As the illest MCs would say: you better recognise!

This game introduced many Millennial children who missed the Second Summer of Love to the sounds of acid house back long before they hit a rave for the first time. Easily one of the greatest Playstation 1 soundtracks ever - hurtling around terrains with that pumping acid going equally full throttle was a total thrill. RIP Colin. 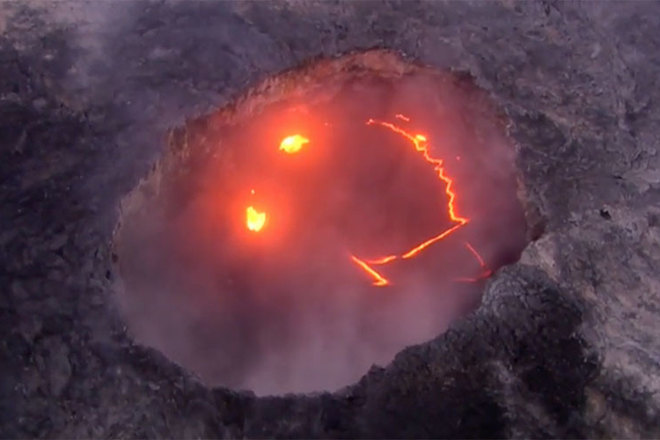 A volcano erupting into the acid house smiley

This was quite something. Shades of the Haçienda were found all the way Hawaii, when a volcano erupted and the molten lava formed a smiley face just like the acid house emblem. Some may call this coincidental rather than the result of a cosmic higher power, but we know it to be true: Mother Nature loves the rave.

LEGO is one of the most popular toys of all time, with hundreds of billions of the plastic bricks having been produced since the Danish company’s inception in in 1949. And it’s also spawned a host of video games, books, films, including the Oscar-nominated The Lego Movie, and more. Two of our favourite LEGO creations, though, came from unofficial sources. In 2014 Alex Allmont put together an incredible LEGO model that played acid house, and in 2016 Daniel Mueller fashioned modular synth cases out of LEGO. Respect to the modders. 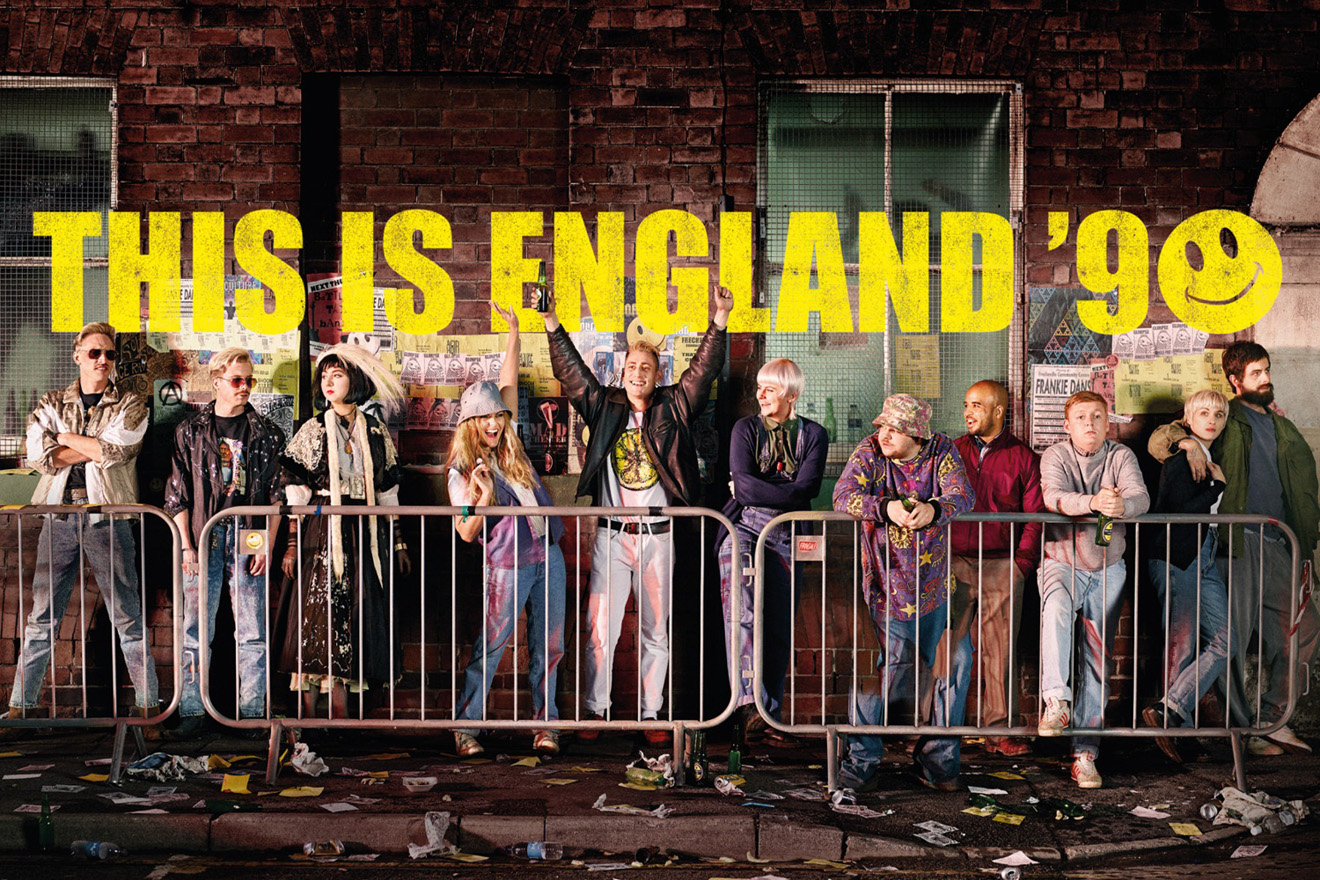 The final instalment of Shane Meadows award-winning This Is England saga centred around the Madchester rave scene in 1990. Meadows’ work is often gritty, but he had warm nostalgia piquing with colourful scenes filled with tie dye and bucket hats when This Is England ‘90 aired on Channel 4 in the autumn of 2015. As did the marketing campaign of fictional rave posters and staged clubbing scenes that was plastered around the country brightening up commuters’ mornings in tube stations and catching curious heads’ eyes at bus stops.

Calvin Harris, who is worth a reported $250 million and gets view counts as high as two billion on his music videos, is well established in the mainstream. But away from his pop and EDM production, he claims to be a big fan of 90s house, recently telling Zane Lowe on Beats 1: “I'm doing a disservice to myself not drawing the influences that I've always drawn from like '90s house which is my main go-to”. His 2014 track ‘Slow Acid’ - released in the same year as his chart-topping single ‘Summer’, chart-topping collaboration ‘Blame’ with John Newman, and certified platinum album ‘Motion’ on which it featured - showcased some acid house energy with a squelching 303 bassline leading the way. It’s amassed nearly 12 million views on YouTube, while the highest ‘Voodoo Ray’ upload play count stands at just over 140k, ah well. See also: ex-Red Hot Chili Pepper’s guitarist John Frusciante’s side project.

On the whole we think it’s fair to say that raves and the Edinburgh Fringe attract fairly different clientele. Scotland’s and the world’s, largest arts festival is more red wine and cheese than thumping kicks and LSD, but acid house has still featured at The Fringe to, ahem, rave reviews. We Are Ian is a play set in 1989 Manchester, focusing on the unifying power of the movement and following madferrit characters in a whirlwind of bucket hats and beats. The play’s Edinburgh run was a raging success, winning plaudits and picking up multiple five star reviews.